Sigmund-Thun-Gorge in Kaprun, Austria - by daylight

find your personal trainer and local guide in the area of Zell am See-Kaprun
After I walked by night through the Sigmund-Thun-Gorge it was clear, I have to see it by dayligt. And today was the perfect day!!
A hot sticky day at the feet of the Glacier of Kitzsteinhorn today ... we are just about 10 km away from the glacier and at about 30-40 km away from other glaciers, Zell am See-Kaprun is really a valley surrounded by high rocky mountains, forest high hils - over 1.500 m high - and glaciers, the biggest and most known worldwide: Kitzsteinhorn, Großglockner, Weisssee and other names I still don't know. 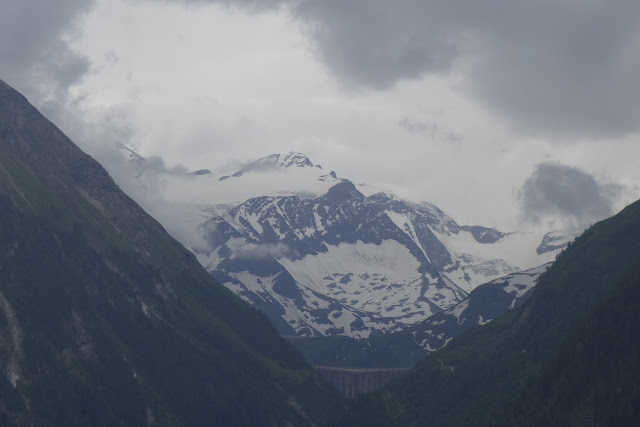 The perfect day for me means:
# when everybody else means: "today is bad weather", so ...
# almost anybody is on the way outside and ....
# I can enjoy the landscape undisturbed :-)
Alone through the gorge and through the rain it was quite an experience today! 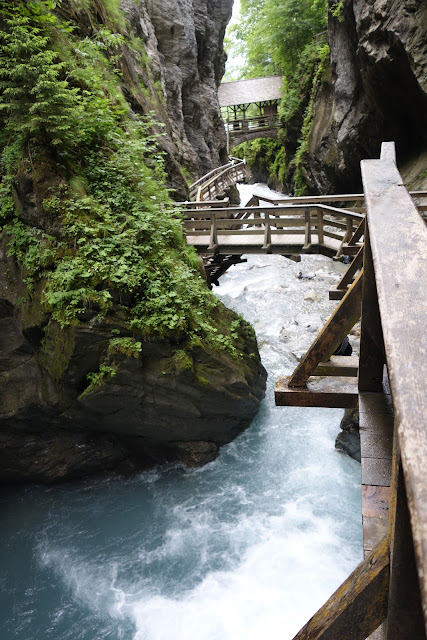 As much as 32 meters deep and running 320 meters long through the Sigmund-Thun Gorge, the Kaprun Stream has left its mark on the rocky riverbanks, smoothing some rock surfaces and etching whirlpools and deep holes into others.

The access is free of charge if you own the Summer Card, otherwise it costs 5,50 Euros. Every Friday Evening you can hike through the gorge for 10 Euros, as it is seen as a special weekly event called "Lights of The Gorge" - I saw it once and it is enough. 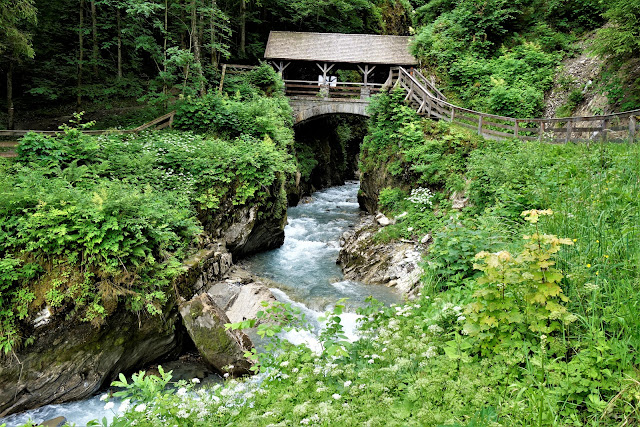 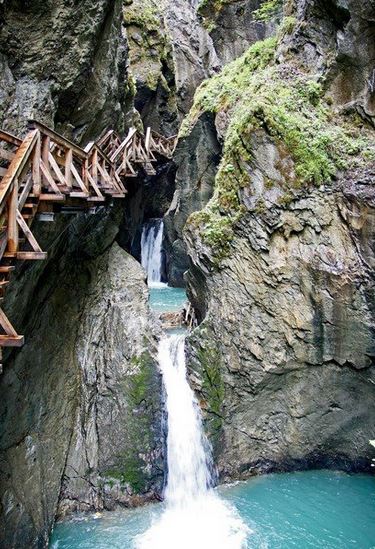 Steep drops and altitude metres accelerate the speed and release the pure force of the water. Nothing will stop this force, neither rock nor stone. It is this force with which the Kaprun Ache has shaped the Sigmund Thun Gorge just outside the town of Kaprun. 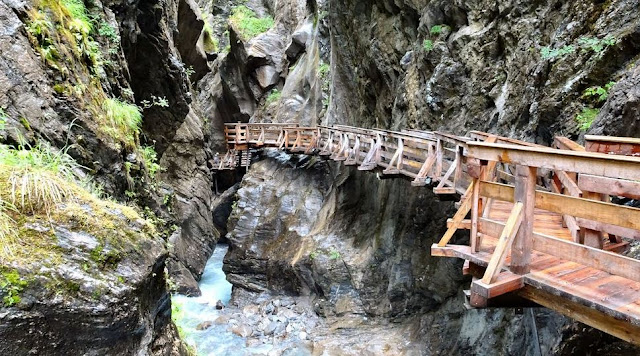 The stream has cut the gorge into the rocks, shaped distinctive smooth sections and created potholes and scours. This process continues to this day and documents the latest period of the Kaprun Valley's history of origins.

"Roaring and powerful rushes the torrent toward us"

This is what Count Sigmund von Thun, a historically important governor of Salzburg, said originally. The sight of the gorge made him say these words, and he was right. 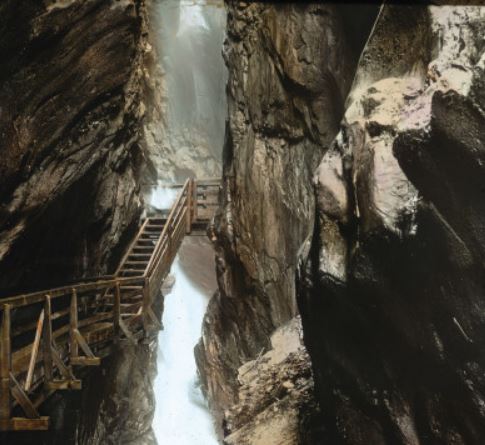 The mass of water in the Sigmund Thun Gorge reaches powerful dimensions especially during the thawing period in spring. A fabulous water world opens its gates to visitors, families and fans of real natural spectacles once the winter closure of the gorge is over. 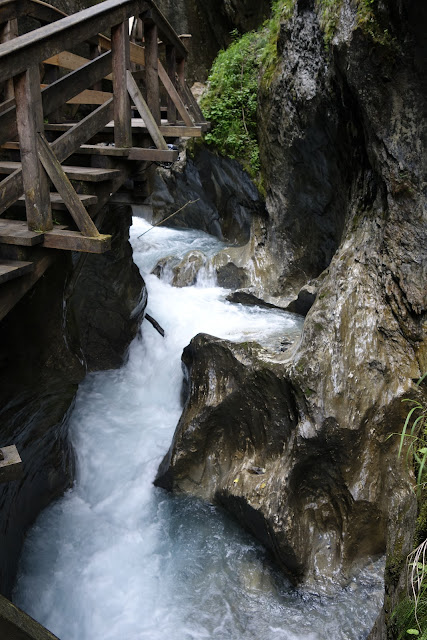 You explore the gorge and immerse yourself in the history of origins of this natural spectacle on specially created boardwalks and bridges. 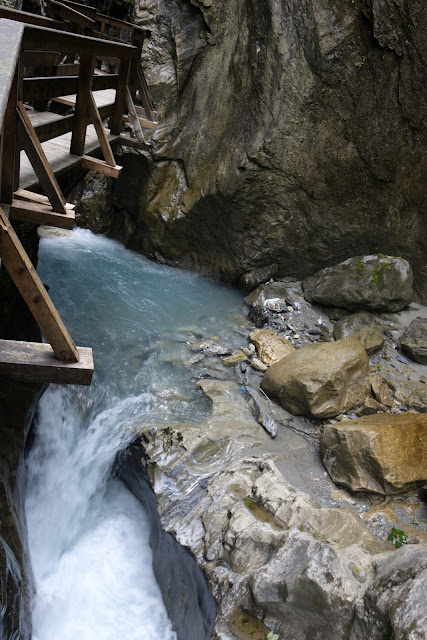 Around 14.000 years ago, the Kaprun Valley was covered by a mighty glacier. Moving slowly down toward the valley, the glacier worked the hard limestone rocks of the Maiskogel and the Bürgkogel. 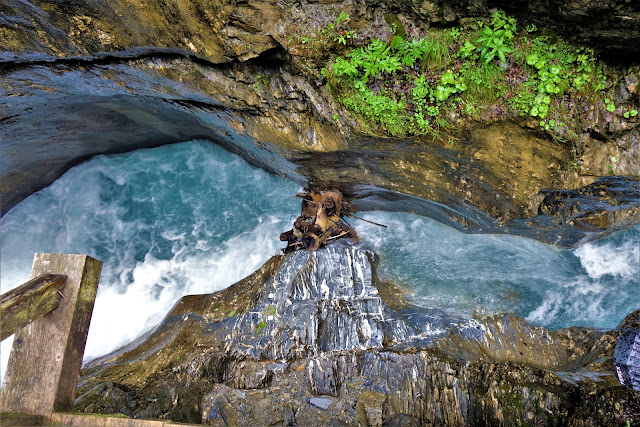 As the glacier melted it left a valley cut through which the Kaprun Ache run down toward the valley while shaping today's Sigmund Thun Gorge. 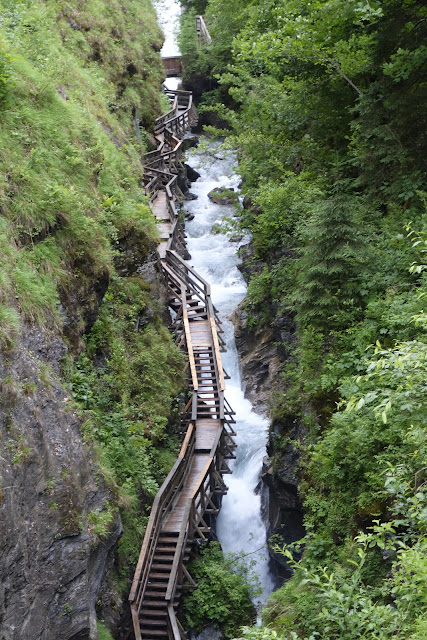 First settlers used this save place about 4.000 years ago. They came into the area because of the rich copper deposits. The hilltop site was used with interruption for a long period. 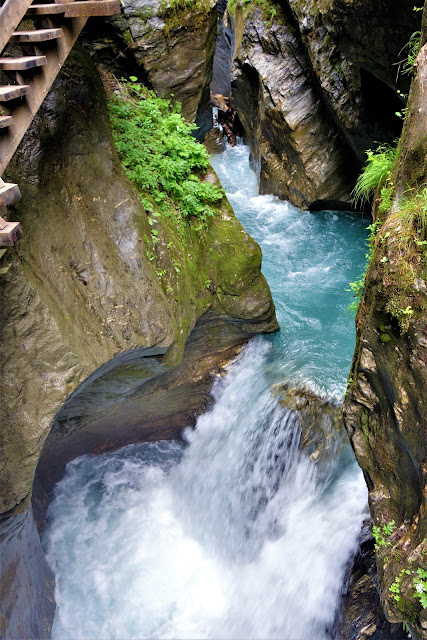 From the Celtic time an earthwork exist. From the late antiquity ramparts were excavated. In the middle Ages a fortress was build. It was a previous building to the Castle of Kaprun. Afterwards the hill was an agriculture site. The gorge was also used to raft wood. Signs and figures hewed into the rocks are from this period. 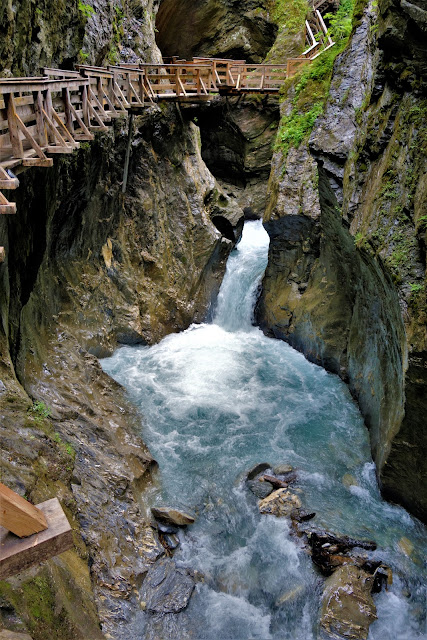 Beside the agriculture the wooden wealth of the valley was important. Hence, the Sigumund Thun gorge was already used during the past centuries to the raft. In the gorge rock hewed signs and annual figures point to the work of the wooden farm-hands. 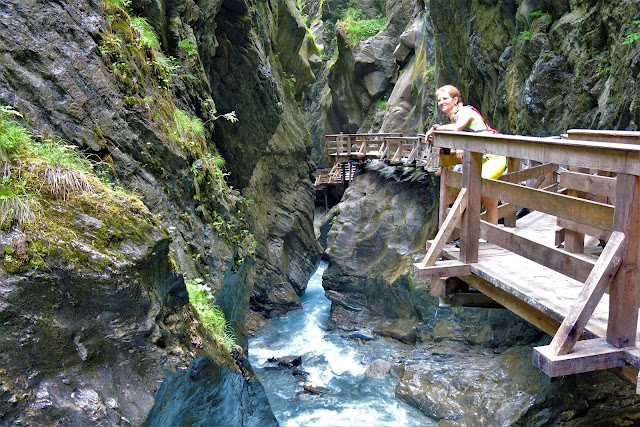 Everytime I go alone close to large amounts of water, such as big rivers or waterfalls, I feel a deep huge fear inside me. It is a sort of emotion that comes instantly and I need really a lot of courage and determination to ignore it. I remember about many situations ..... alone in the wildness hearing the terrible sound of falling waters .... 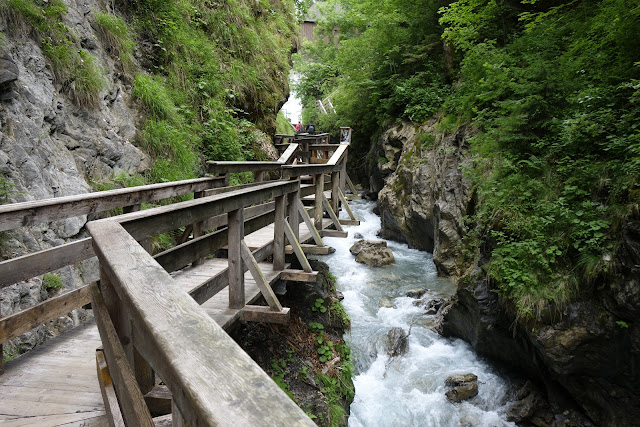 It is like I loose the control because I cannot hear anything .... just the noise of falling water. This noise means a terrible force which put me in danger, this is the connection I probably do ..... and it have to has a deep reason .... but I never thought about it (!!) 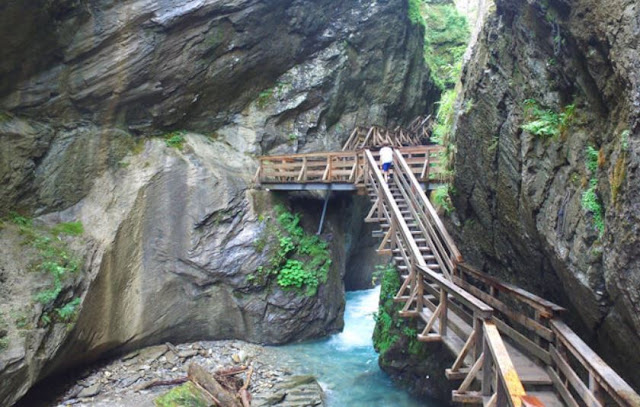 It happend in summer 2001 as I came for the first time to the Alps and I lost the way by bike somewhere inside a gorge between Germany and Austria! I suddenly was in front of a huge, huge and high waterfall ..... I felt the stomach tremblend and I tried to keep calm, but finaly I started to run along the bike to get out from that area .... although it was gorgeous beautiful! 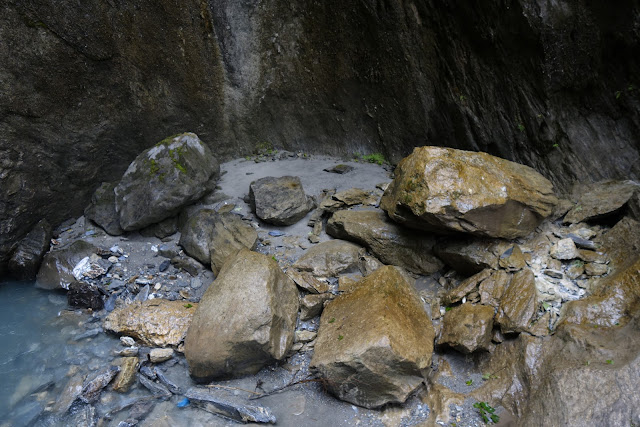 It happened in the Himalyas, in the second day in Namche Bazaar as I trekked alone, in December, for the acclimatisation and then again one week later, trekking alone to Gokyo Lakes in the higher Himalayas ..... wow .... I remember every single emotion and noise and sound and feeling ...... 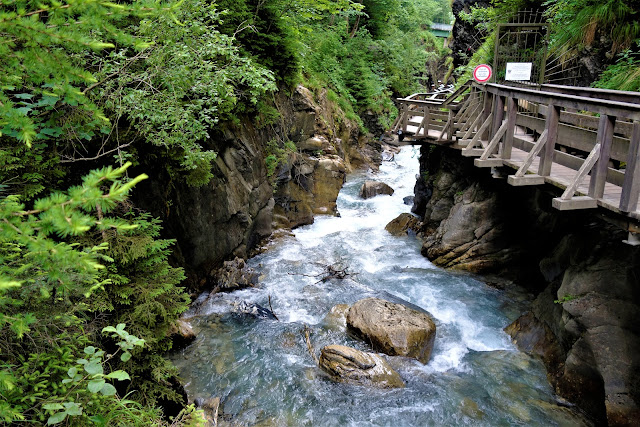 I sometimes decided to interrupt a trail and to return on the same path just in order to get away from that natural force of the falling waters ..... so, it is not a joke, it is something I carry inside since I remember  ..... and today it was pretty challenging, but .... 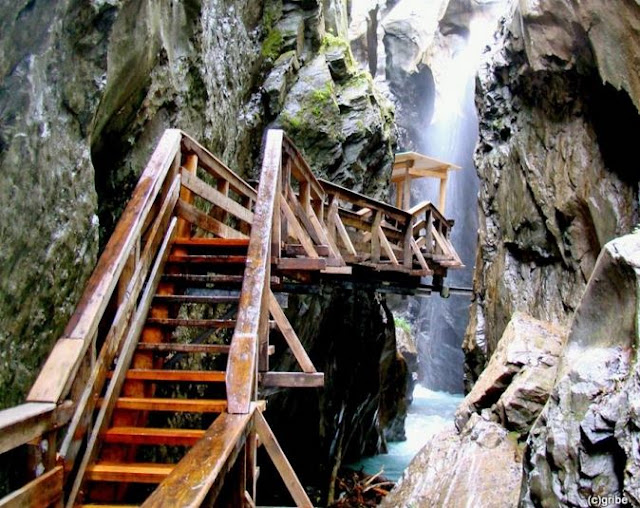 I forced the emotions and I did so, as I am not afraid at all! I reached the other end of the gorge taking pictures and then I decided to go back the 320 m and to walk again the entire trail filming every step!!! And it was a real emotional challenge, but .... I did it!!! (see the video above!) 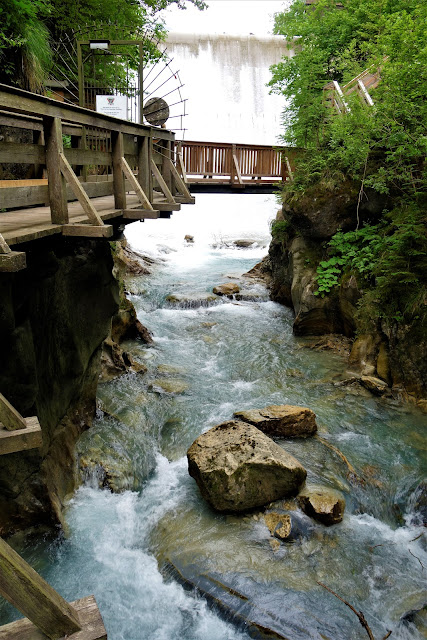 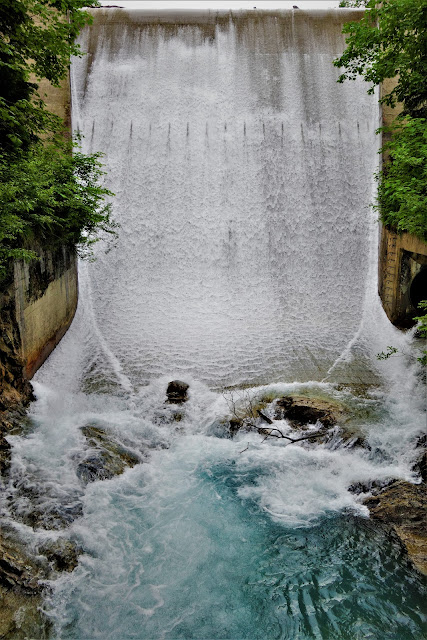 I left the gorge and I continued my solo adventure taking the path to the left, through the rain. Trail running. Emotional run. Meditative run. Run for Life, if you want. 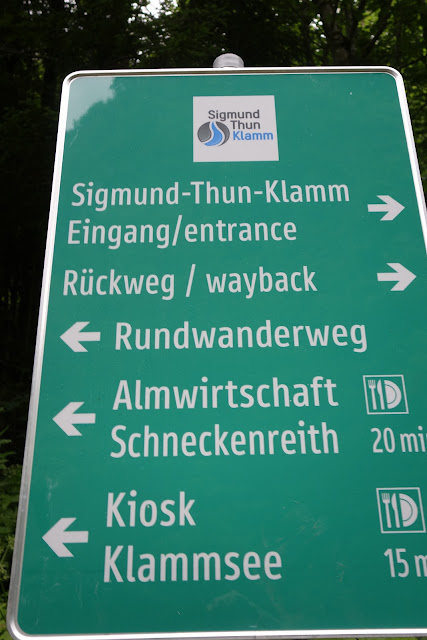 Follow this link to see the second part of the today's Journey.
A similar, but yet very different trail I did last June in Low Austria (The Grand Canyon of Low Austria) and some years ago on Malta Island and Teneriffa.