the first snow was riding slower as myself :-)

the story in pictures here
technical details by Garmin here 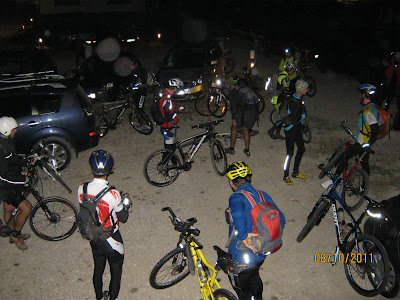 We started at 6 a.m., on Saturday morning, Oktober the 8th. 20 men and one lady, me :-) And, following the story of my life, in a very, very, very short time the group lost me and I lost the group, I did not know the trail, left or right .... so I waited for a sunrise and, yes, following the story of my life, I did the track alone for the rest of the day. A new lesson of life.

It was a pretty fresh air at 6 a.m., but warmer as expected actually. Pitch dark and this was my problem. As I am wearing permanent glasses, biking off road in the dark is a relevant problem for me, doesn't matter of the frontal light I have. For such of tours it would be ideal to know at least the trail, if not the most part of the group you are going to ride along. I didn't know anything of these.
The trail started uphill for a while. Somehow I had the feeling that behind me are at least 10 people, so I stopped to help one guy who seemed to have troubles with his cycle computer. And then he disappeared in front of me in the darkness. Behind me were only 2 guys who also passed on further, so now I was the last one. As I reached the first intersection it was still dark, about 6,40 or so. Left or right? I called after guys, but nobody was in the area anymore. Nobody waited for the last one, as normally you do in a group when there are intersection and when the trail is not marked. I tried by phone to reach two of the guys but nobody answered to my calls, so I gave up and I considered on my own on the trail. A little bit much to early as expected, but life is hard. 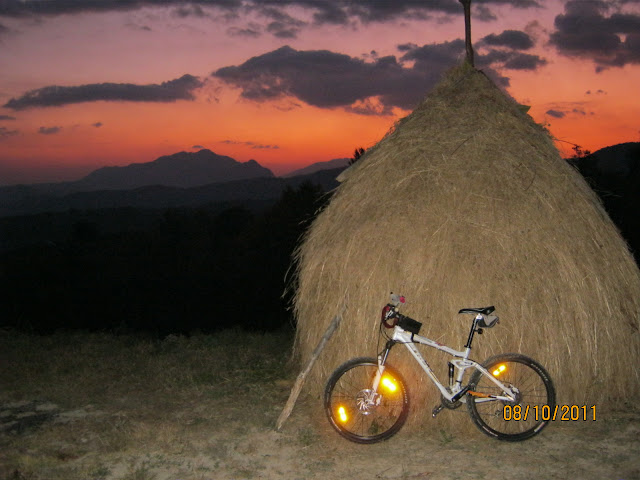 I waited for about 15 minutes I think, to be some day light and to find out the bikes traces. I crossed one or two villages, no locals outside, nobody to ask for direction. I crossed Sohodol Village to Glajerie then.
I was called after about one hour. The big group split into two groups and the second one waited for me about 2 km in front of my present location. As I reached them after few minutes, they started immediately further. They were 3 people only. 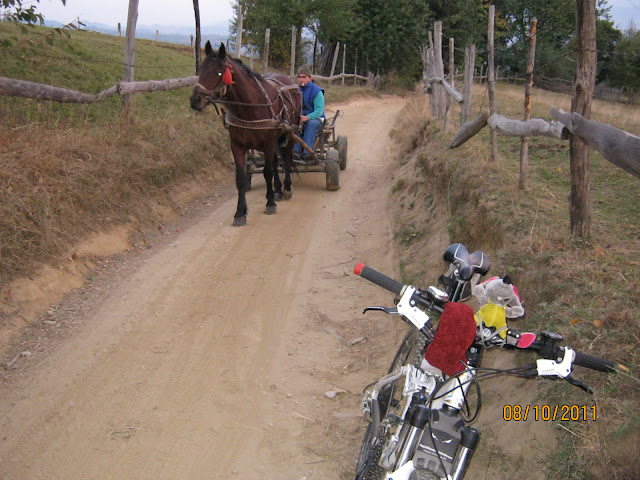 After few minutes I was alone again and one of the guys, Razvan, waited for me to a big intersection to explain me the outgoing path to Rasnov, to the left! I was very amused in my mind as he explained to me how long and difficult would be the trail to Diham Cab. He didn't say clearly: "You better give up and return!" :-)) I said "OK, OK, wish you a nice day, I will leave the trail." And he was gone and lost for my eyes in less than a minute. 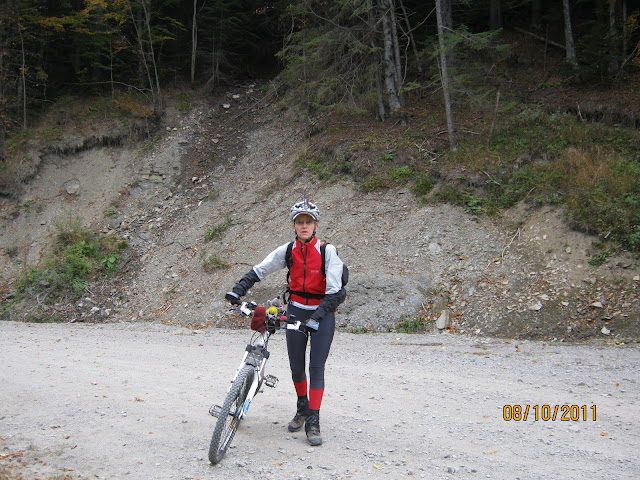 It was about 8,30. "I should be really crazy to go back now, so early!" The weather was great, sunny, chilli, dry, ideal time for a long ride. So I followed the guy to the track to Diham Cab. It was a good idea. Long way, but less than 10 km up hill. I stopped for a while to eat something. 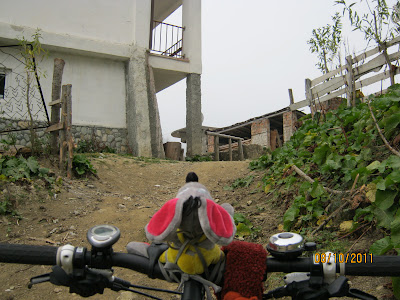 Reaching Diham Cab I suddenly felt depressive. I can only use some words: empty, ruins, misery, degradation. It was a surprise to see that depressive location. I tried the outside toilets .... horrible experience indeed. I can only sigh .....
It was about 10 when I left Diham, going the steep uphill way, passing over some more ruins, future mountain cabs probably, which are at this moment only for sale. All these constructions are giving such a sad and destructive image to this high landscape .... 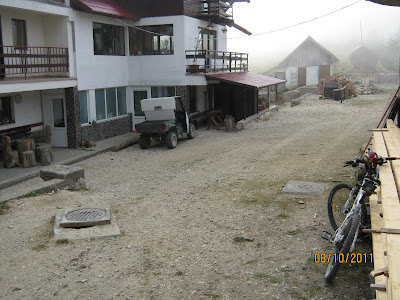 As the frog covered the land, I had to stop and to change my gloves, to put a hood I fortunately had in my backpack. It was cold and wet and cloudy, so I expected a long cold rain.
I followed relaxed the way to the left, to Rasnov. I wanted to go right, to Busteni, but then, the idea of going on DN1 to Rasnov was not so appealing and because I do not know the area, I had no map, no pump, I preferred to take the smallest risks. I thought back to Himalaya adventure and I felt again, like several times in my life, that traveling abroad give me always a much more comfort and security than traveling inside Romania. This is my perception since I remember to exist on this world. 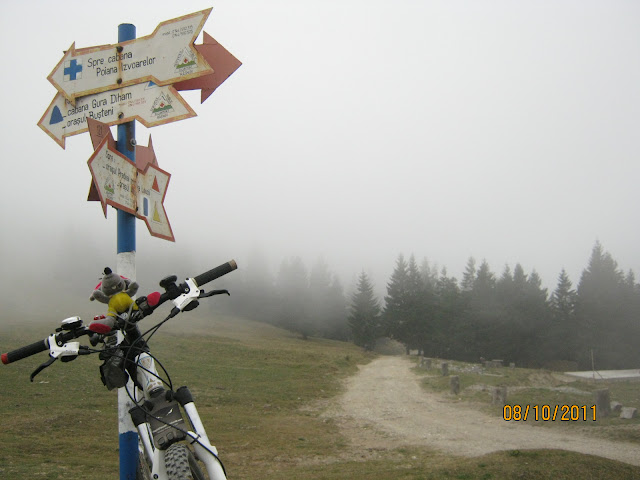 Reaching the wet asphalt wasn't a joy, but I had no choice. So I rode up to left to Rasnov. It was strongly rained and from Rasnov I rode further to Bran, finding very easy the accommodation place, Cehov Pension. It was 1 p.m. 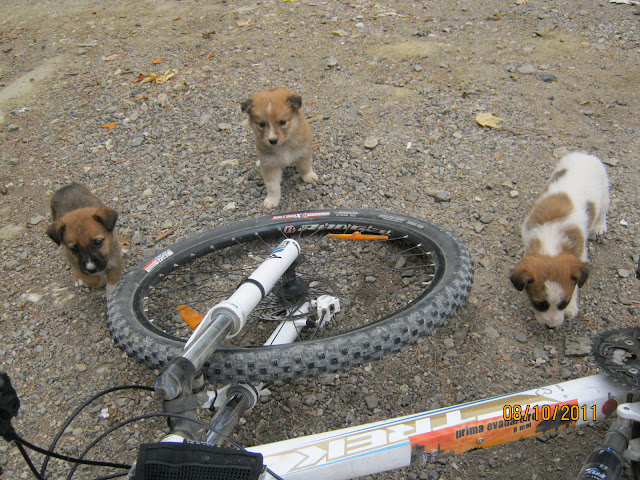 The room key had the guys, so I couldn't change and have a nice warm shower for about two hours, when I could ask for the reserve key and I enjoyed a hot shower and some chocolate I had brought with me. And a bier, of course :-) 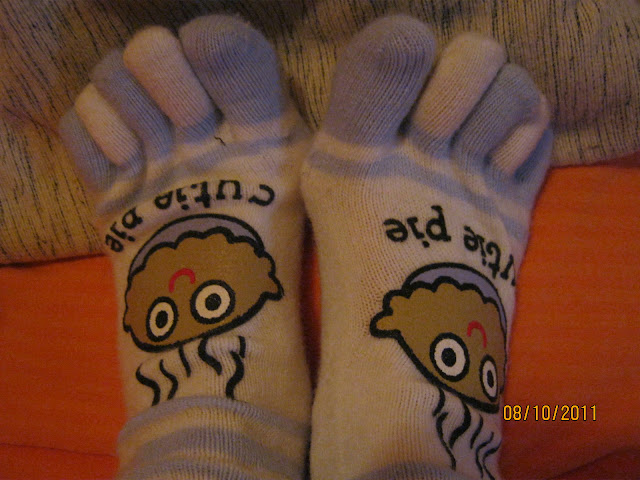 The rest of the group arrives after 4-5 p.m., some others came after 8 p.m. We had a very tasty traditional bean soup.
I liked the location a lot, I would attend it any time for such of activities.
I went to bed and in the morning all around was covered by the first snow blanket. Having in mind my Himalayan pictures, I said "good-bye" from Bran on Sunday morning at 11. 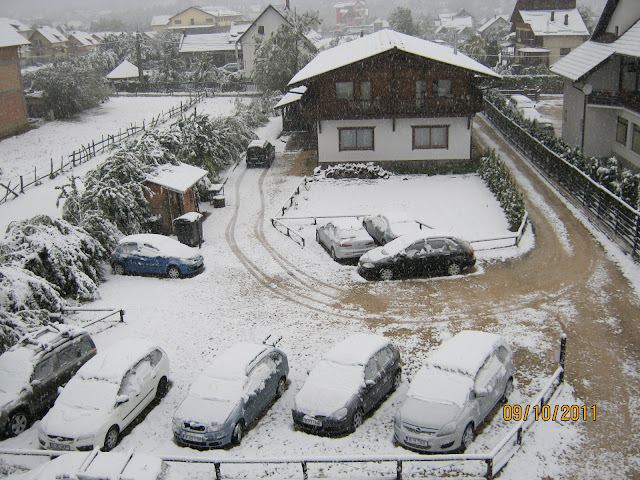 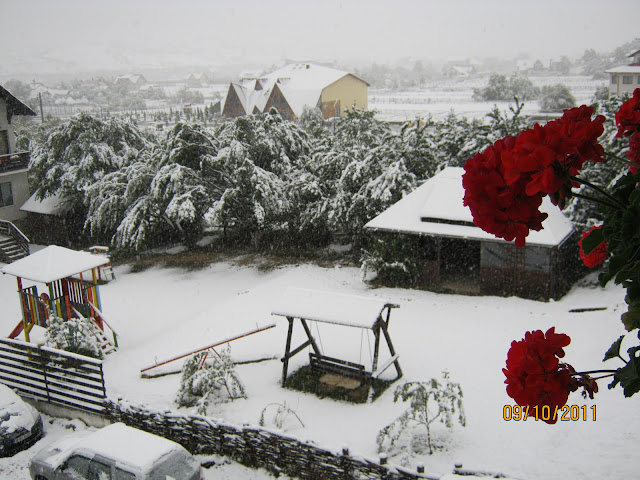