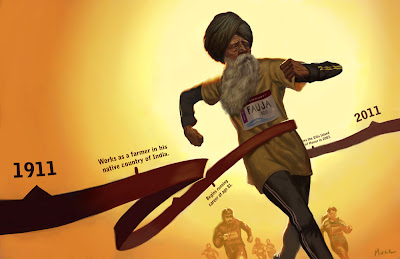 Fauja Singh was born in Beas Pind, Jalandhar, Punjab, British India on April 1, 1911. Not much is snown about his early life. He lived with his wife in his village in Jalandhar, and moved to London in 1992 to live with his son after his wife's death. He speaks only Punjabi and cannot read or write. The death of his son Kuldip and earlier of hiswife forced him to search for a worthwhile alternative in life. Fauja's jogging skills were developed on an Indian farm in Punjab, and then at the age of 81, after moving to the UK, his love for the sport became more "serious".
In London, he started running by challenging other old-agers to race him. Gradually he moved on to longer distances. At 89 years, he took seriously to running and ended up in international marathon events. When he first turned up for training at Redbridge, Essex, he was dressed in a three-piece suit. The coach had to rework everything, including his dress.
Singh ran his first race, the London Marathon, in 2000. According to his coach, he used to run up to 20 kilometres easily and wanted to run a marathon, thinking it to be just 26 kilometers and not 26 miles (42 km). It was after he realised this that he began training seriously.
Singh shot to fame when, at the age of 89, he completed the gruelling 26.2 mile distance in 6 hours and 54 minutes. This knocked 58 minutes off the previous world best for anyone in the 90-plus age bracket. 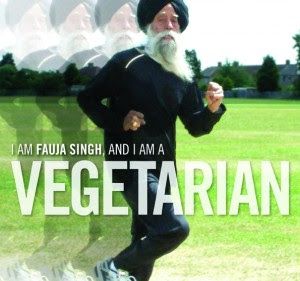 Singh is 172 cm (5ft8in) tall and weighs 52 kg (115 lb). He attributes his physical fitness and longevity to abstaining from smoking and alcohol and to following a simple vegetarian diet. He has been quoted as saying "I am very careful about different foods. My diet is simple phulka, dal, green vegetables, yogurt and milk. I do not touch parathas, pakoras, rice or any other fried food. I take lots of water and tea with ginger. ... I go to bed early taking the name of my Rabba as I don’t want all those negative thoughts crossing my mind."
Speaking about the marathon, he said: "The first 20 miles are not difficult. As for last six miles, I run while talking to God.
Running Career
Source: Wikipedia 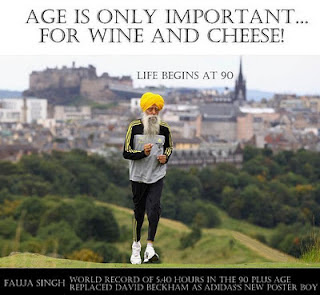 Oldest marathon runner announced retirement
By Dil Neiyyar BBC Asian Network
A man believed to be the world's oldest marathon runner says this Sunday's London Marathon will be his last.
But 101-year-old Fauja Singh, from Ilford, east London, will not be hanging up his running shoes just yet.

He intends to compete in what he calls "short races" of 5km and 10km.
His trainer Harmander Singh said: "I believe it's probably best that this is the last. I don't think he has anything else to prove."
Speaking in Punjabi, Fauja Singh said: "I'm very excited. But I'm worried I could get flu or something like that before then. So I can't wait for Sunday to come." 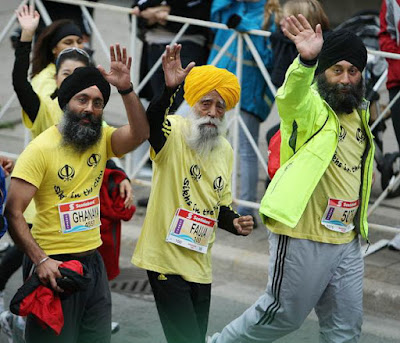 His coach believes he is in good shape for the 26.2-mile run and is hoping Fauja Singh clocks up a good time.
The London Marathon has a special significance for the great-grandfather as he was inspired to take up the sport after watching television coverage, 12 years ago when he was 89. 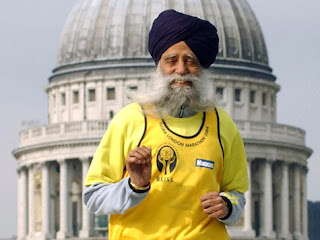 'Best trainee ever'
His coach said: "I only had 10 weeks to train him for his first marathon. He turned up the first day in a three piece suit and a pair of trainers.
"But he soon got his decent gear and we haven't looked back.
"Turning him into a marathon runner was one of the easiest jobs I ever had because he was so keen on doing it.
"If I said we're doing 10k today he would say why not 20k? (He's) the best trainee I have ever had."
Fauja Singh has run a total of eight marathons including the London and New York races.
He has enjoyed every one of them but the one that stands out more than the others is the Toronto marathon.
That is when he raced himself into the record books as the world's oldest marathon runner.
Fauja Singh's remarkable story has left many people scratching their heads. How can someone his age run 26.2 miles? 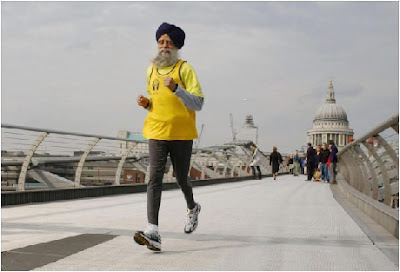 Some have even begun to question his age because he does not have a birth certificate.
But Harmander Singh believes the criticism is unfair: "Fauja Singh was born in India at a time when there were no birth certificates.
"He has a British passport and we've had letters from Her Majesty on his 100th birthday. The Olympics would use the passport as a definitive document."
Many people in the running world think critics are missing the point. A marathon is tough whatever your age.
Mike Gratton, a 1983 London Marathon winner, said: "I think everybody is absolutely astounded that somebody of his age can still be doing any sort of sport.
"But to run a marathon, which for many people is the ultimate in endurance, is quite incredible."
Others see Fauja Singh's achievements as a sign of changing times and that society needs to re-think how it views older people.
Emma Spragg of Age UK said: "Everybody now in the UK, one in four of people born today, will live to be a 100. So there's bound to be more people being active in later life. So why not keep challenging those boundaries."
Although Fauja Singh is retiring from marathons after Sunday his coach believes his legacy will go on.
"Everyone who has come across him or heard about him... says if he can do it, we can do it. We have a saying 'he is my granddad'. Well, he is everybody's granddad." 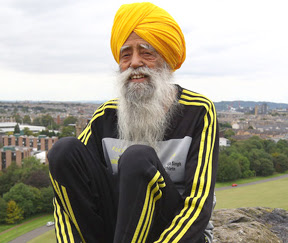