New life on the lake

I was visiting her for the first time on the 13th of May this year. It was my first time seeing a swan on her nest. 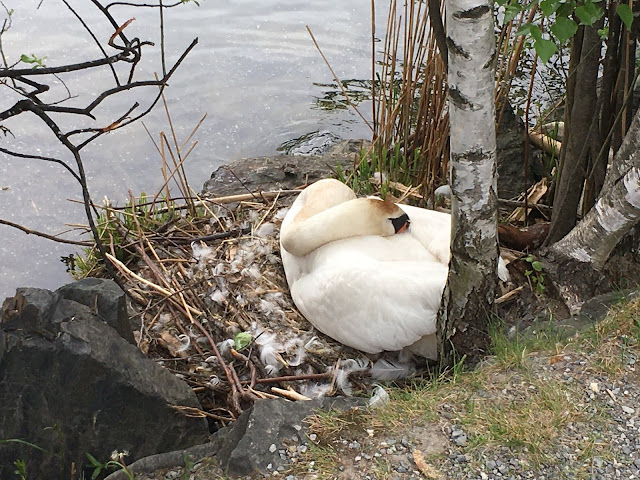 I thought it is a bit strange to choose that place so close to a path where people can come so easily. But swans are big, heavy and quite aggressive birds, so they don't know fear too much or at all. So the best is to show respect in front of them, especially when they are many together as they use to do during the winter. 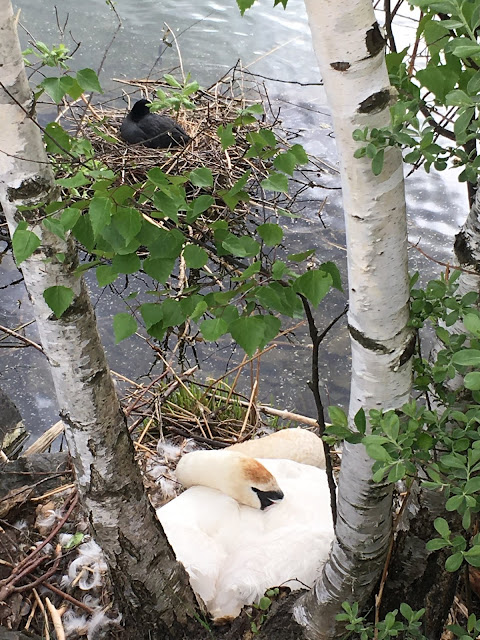 Beautiful, beautiful creatures who captured my fascination while living close to Danube Island in Vienna for two years. I see them every day for the last two years and I cannot change my fascination for their majestic kind of appearance on this post-card type landscape. Summer or winter, autumn or spring - they are staying here in a large number and bring visual and emotional joy for us. Such unfriendly and beautiful creatures, the swans ....
Since our first meeting as I stared her and for sure I disturbed her by being present so close to her I revisited her every few days. Living on the opposite side of the lake my walking or running way to her takes about five kilometres and a few times I came to visit her without any other reason. Just to see her again.
Every time gorgeous and on the same spot. 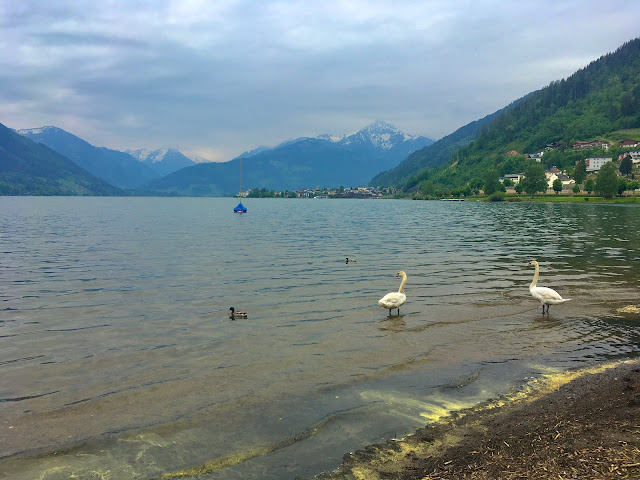 Swans usually mate for life, although "divorce" sometimes occurs, particularly following nesting failure, and if a mate dies, the remaining swan will take up with another. The number of eggs in each clutch ranges from three to eight. 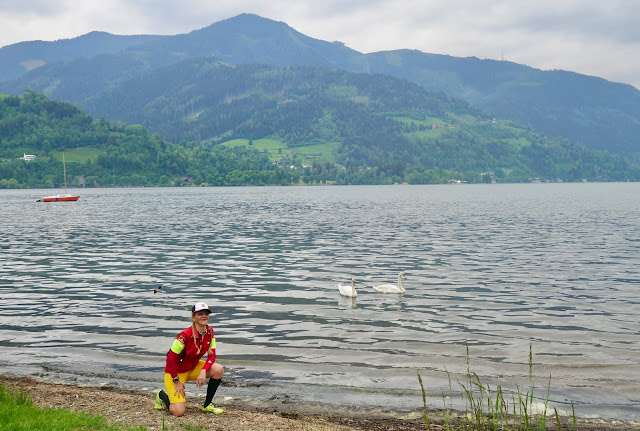 Swans are the largest extant members of the waterfowl family Anatidae and are among the largest flying birds. In the video below it is a very angry male because the lady flew away from him. His ego, proud and masculinity were probably very hurt!
The largest species, including the mute swan, trumpeter swan, and whooper swan, can reach a length of over 1,5 m and weigh over 15 kg. Their wingspans can be over 3,10 m.
What we have here are the mute swans and it is very rare seeing one of them being alone by itself.
Quite unusual for birds, swans have "teeth" - jagged parts of their bill that are used for catching and eat fish. 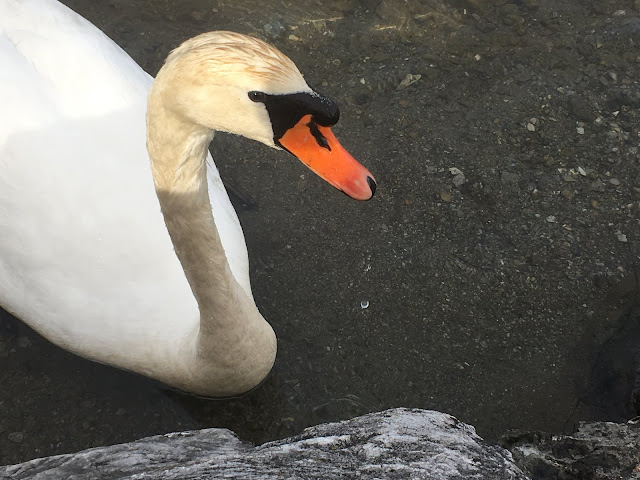 Adults also have a patch of unfeathered skin between the eyes and bill.
A group of swans is called a bevy or a wedge in flight. 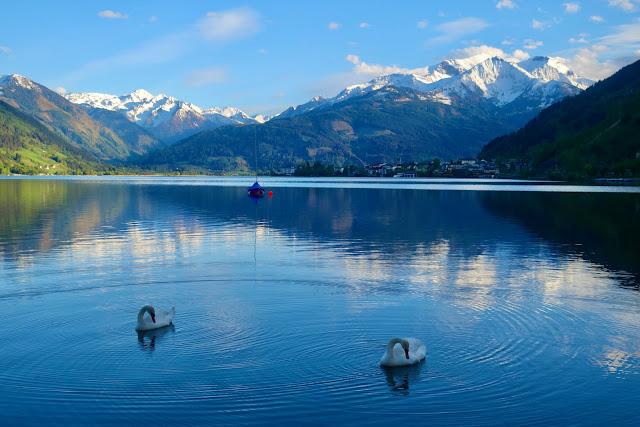 Several species are migratory, either wholly or partly so. The muse swan is a partial migrant, being resident over areas of Western Europe but wholly migratory in Eastern Europe and Asia. 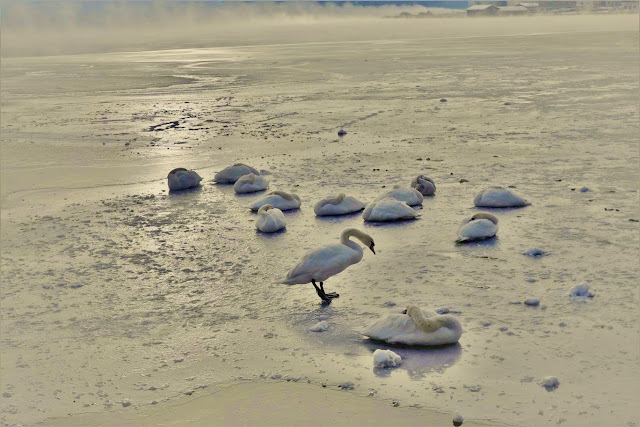 The picture above is from a very early February morning 2018.
Swans famously mate for life, and typically bond even before they reach sexual maturity. Divorce though rare, does occur; one study of mute swans showing a 3% rate for pairs that breed successfully and 9% for pairs that don't.

Swan's nests are on the ground near water and about a metre across. Unlike many other ducks and geese, the male helps with the nest construction, and also take turns incubating the eggs. The incubation takes at least days as I have read. I wanted to know how long time I will see "my swan" there on the eggs.
Yesterday late evening - I started at half-past eight as I never do - I walked around the lake and I visited her again. She was still there on the nest! 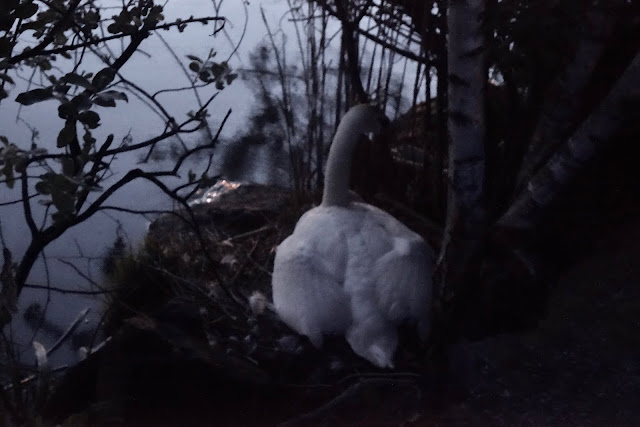 Along the shore, there were so many ducks, swans and other species sleeping or not. It was a peaceful evening and no humans on the way. Only me. But I am not human :-) 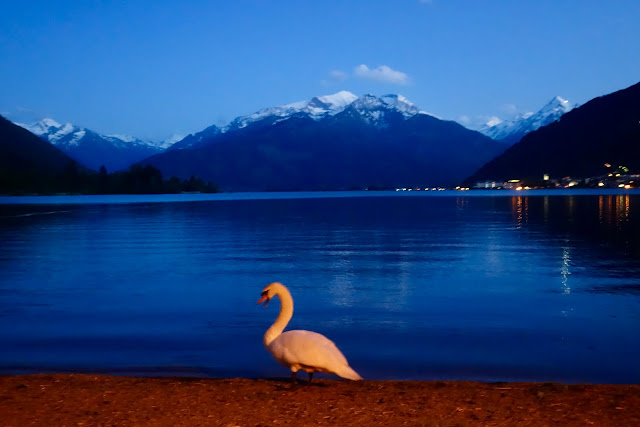 Average egg size for the mute swan is 113 x 74 mm, weighing 340 g, in a clutch size of 4 to 7, and an incubation period of 34-45 days. Swans are highly protective of their nests. They will viciously attack anything that they perceive as a threat to their chicks, including humans.
How old can become a swan? 16 up to 20 years old.

It was a rainy and very cloudy day today, the valley covered by dense fog. But in the afternoon I left home for a walk around the lake.
As the stronger rain started I just reached half of my mileage, I was on the opposite side of the lake and I saw the new life, the new bigger family .....
I stopped and filmed sweet moments of the swan family getting pitch wet, but who cares? I still had 6,5 km ahead to walk back home and when you are wet, you cannot become "weater" :-)
Very emotional, I loved it .... 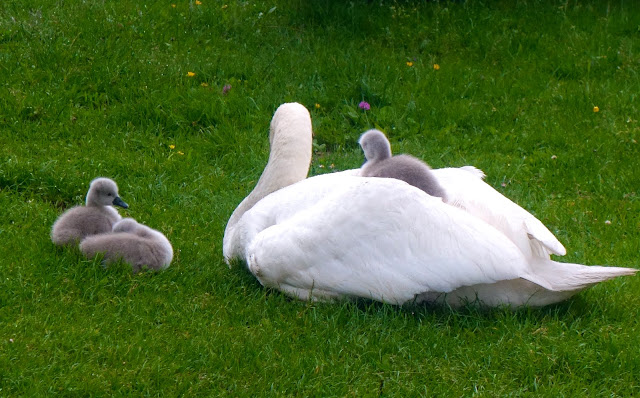 After about half a km I reached the point where the nest was and I checked up ...... oh yes, the nest was left and empty, so "my swan" became mother :-) 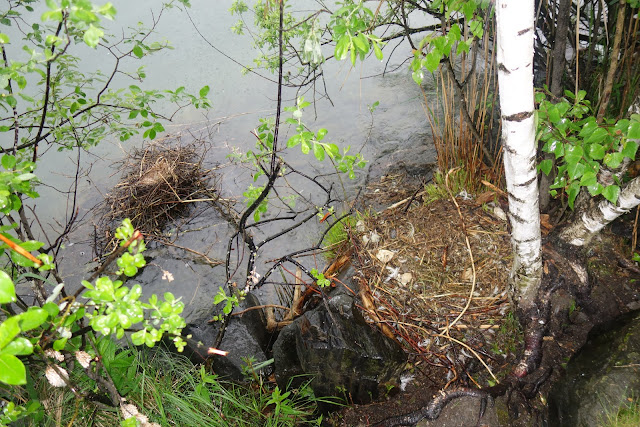 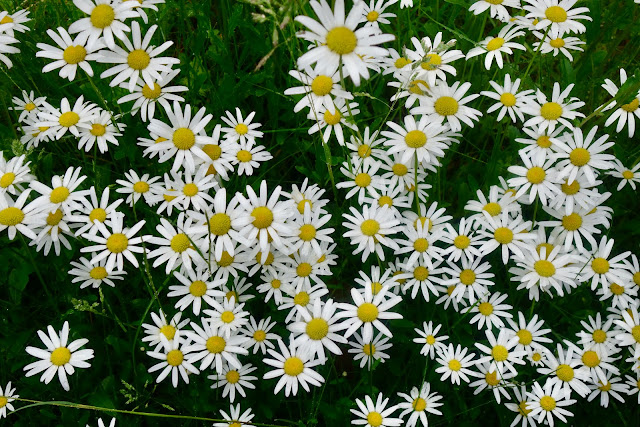 And just a few steps away from the swan's family, another sweet new larger one, oh my Gosh!!! The funny ducks!!!


As I got closer to my home, still three km to walk, the peaks around the valley came into the view ..... 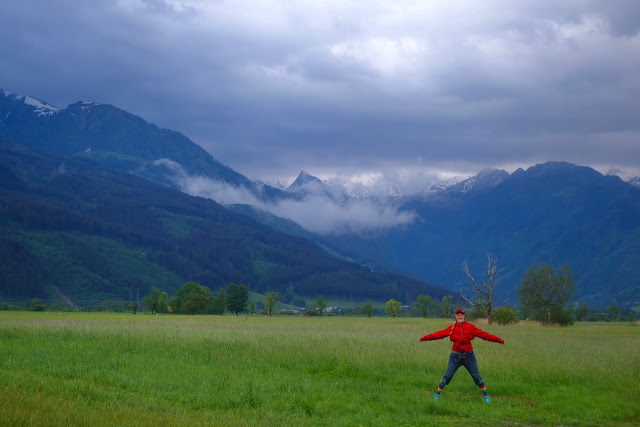 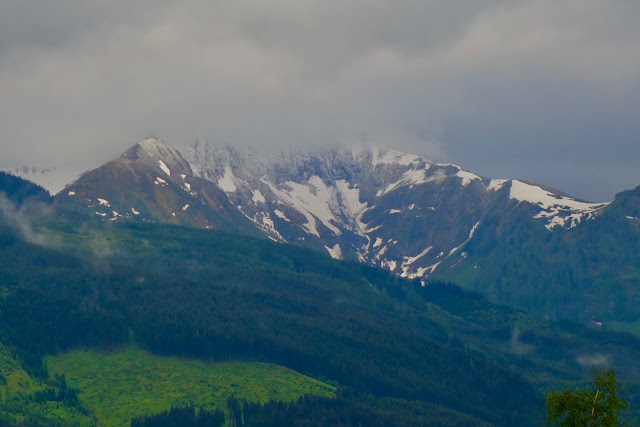 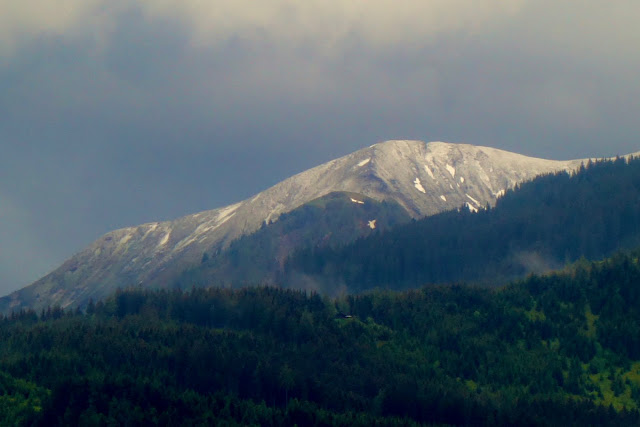 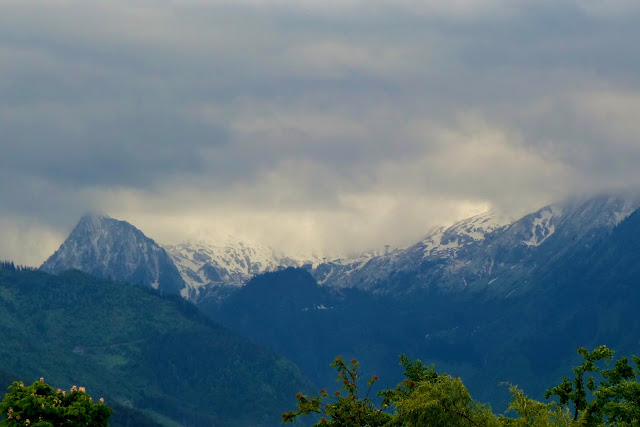 With frozen hands, I needed some time to warm them under warm water and then I could change my clothes. Good night :-)