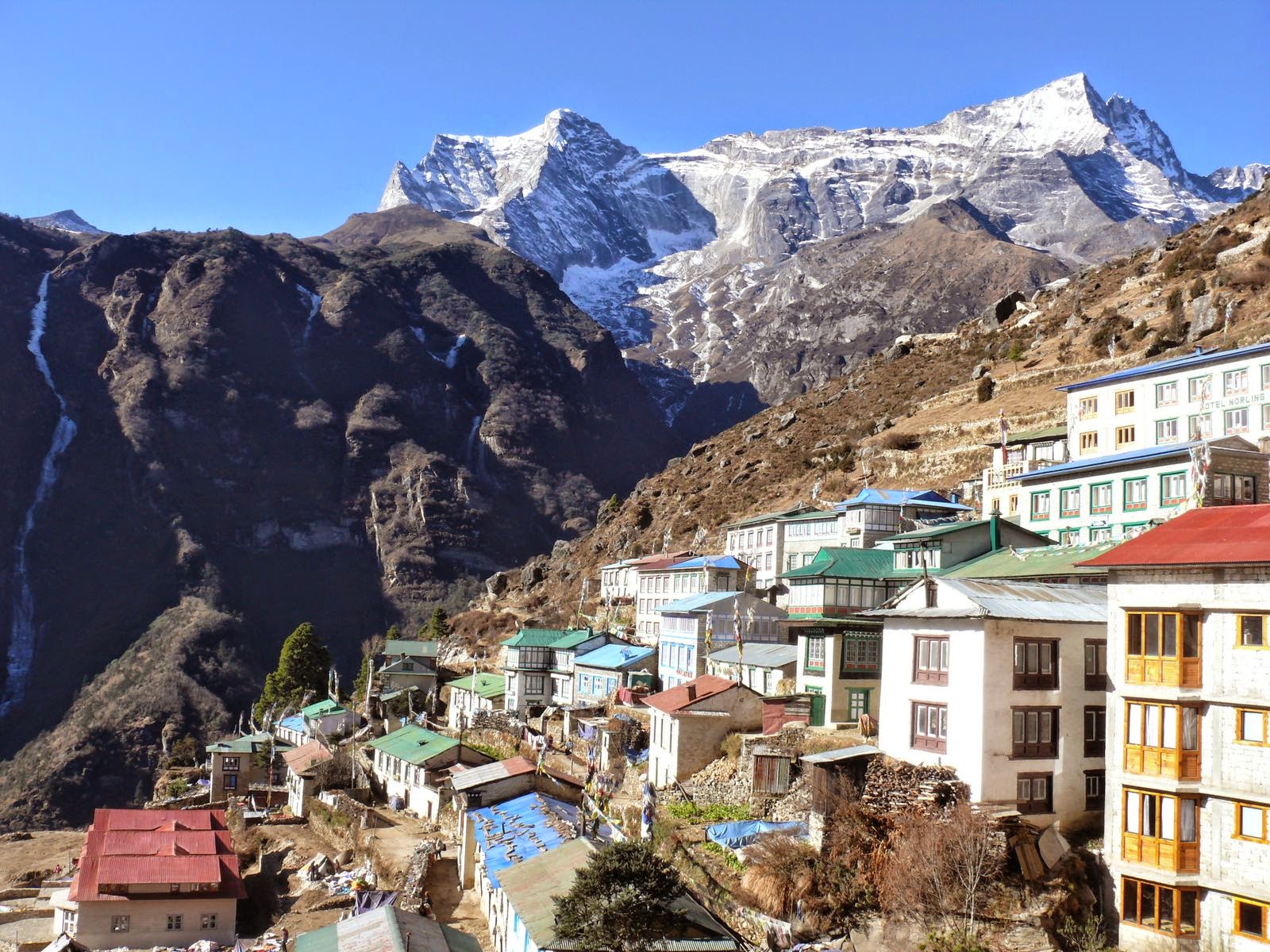 Wow! What a wonderful morning after a sleepless night!! Pretty cold in the room by night. I put the blanket over my sleeping bag and it was very warm inside, but don’t dare to get out your arms or nose! It was the first night when I couldn’t sleep at all, at least 10 minutes. What are you doing when you have to confrunt this situation? Nothing. Yes, I know, it sounds stupid, but every single minute you just hope that in the next minutes you will fall asleep. You are tired for doing anything else. It is too cold and the light you have is not enough for reading. You don’t want to use your batteries at the beginning of a long trek, this would be much more stupid. So, you just lie in your warm, but limited sleeping bag and struggle with the strong wish of sleeping. You start to count elephants, then sheeps, as they are easier :-)), then stars. And if the number of the elephants or sheeps is a finite one, the number of the stars is infinite ...... So, in the morning, you are really very tired. To my total unfortune, I also had to go to the toilett three times. But still lucky, the toilet is inside house, even the same level as your room :-) And I had big breathe problems, coming from my cold. I had a stuffy nose and nothing to help me, because I had been so smart in the last moment and left the tiny Chinese wonder box home, please, please don't ask me why!!!! 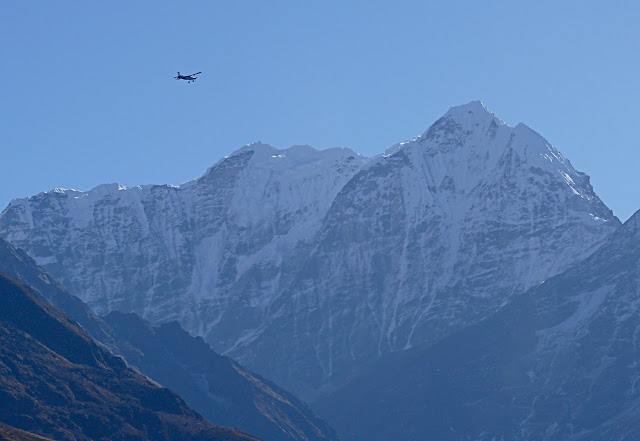 Very quiet in the night, I have the feeling we are actually the only 3 guests in this huge building (OK, don’t make the comparison with the Pentagon size, please! Or with a Marriott Hotel! Huge for this area, for this altitude, for this general conditions, after all you are almost close to an end of this World, just some days of walking apart, right?)
I had a small standard breakfast:
2 fried eggs (excellent taste!),
6 slices of fried potatoes,
2 toasts and
a cup of coffee.
The coffee in Nepal is terrible tasteless, they don’t want or they don’t know how to prepare it and I have no doubts they do it so weak just for saving the coffee. The standard breakfast includes a tiny fragment of butter and jam/honey, but they forget to bring it and I just wasn’t in the mood to ask for it. I knew the portions are so incredible small, that you don’t feel the lack of it, only the feeling you are cheated in some way.
In the nice big dinning room there was a lot of activity. About ten people were discussing and arranging and rearranging the pillows or other kind of details. The owner’s family is expected tonight a group of 76 monks. They are coming down from Khumjung for a special private religious ceremony, which will take one week long! They will be welcomed, have accommodation, meals and beverages for free. Seventy-six monks! Their role is to read about 80 religious books for the welfare of the family and their business, to bless the entire area. It is a big, long and for sure complicated ceremony, hold once per year. Now, that it is off season and very few tourists, the owners have the time and possibilities to do this. They have also a special religious room, which we had the honor to visit later in that evening. They keep there all the tools, all those mysterious books, some monks – probably the most important of them – are spending their time inside that room, talking, drinking tea, eating, debating. 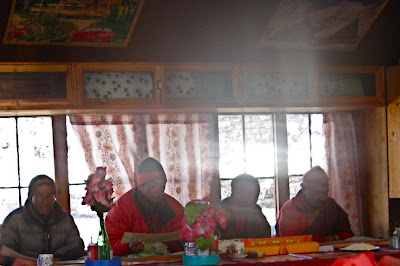 This is a crop from a picture I could take about 10 days later in an isolated village. I didn't had the nerve to ask for permission of filming or doing pictures. The long orange thing on the table is the form of the book. To be very honest, I had 3 different occasions to take real pictures of all these things, but in a strange way I just felt there are to holy issues and I am sure the locals are so tired about simple tourist asking stupid questions and photographing everything, doesn't matter what. I call this a sort of old fashion common sense, but next time I will leave it back home (!)
Anyway, it will be something important, for sure something very interesting to see or to feel. I don’t think we will be allowed to stay with the monks when they pray. Those books are not looking like a book at all. Between two wooden boards there are 780 pages. Sizes I appreciate 50-60 cm x 10-15. So, 76 monks will come here and for one week long they will read and sing and mumble as special prayers about 62.400 pages.
So, this morning, the entire staff here was starting to be excited about the big event, but we were allowed to stay for 2 nights longer. It was funny in a way to see how worried the 10 persons in the morning were, in the big dinning room, about arranging the improvised banks and to move their position for some centimeters and then to move it again and again and again, looking for total perfection in such an imperfect world....
I was surprised to see bottles of wine for tourists. White wine, red wine, cheaper or more expensive. To carry wine up to here .... impressive! Costs between 1.000 and 1.400 NRP (13-16 USD) 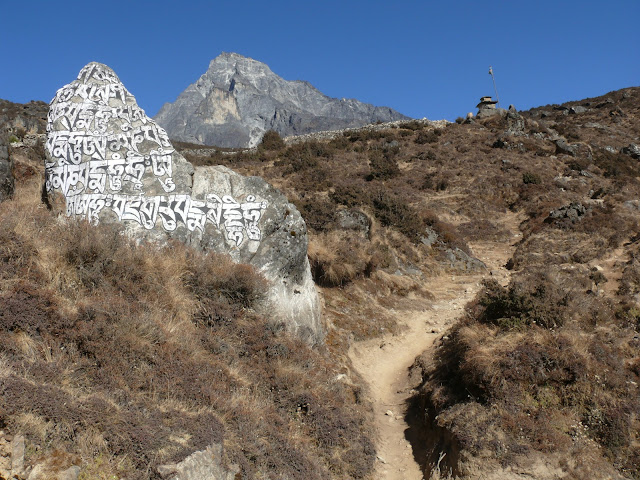 As the British couple agreed I accompany them on the today’s trek, we left the lodge at 10:10, going for the higher circuit of the Sherpa Villages of Khumjung and Khunde. This area was very loved by Edmund Hillary and he invested here a lot of work, so the area has even an airstrip in Shyangboche at 3.790 m, a big school in Khumjung, a hospital. Impressive work! They have power all the time, much better than in the big cities of Nepal, Kathmandu or Pokhara!!