Gokyo Area meant ecstasy and exhaustion, and probably the peak of my sickness, because the apparently simple cold I cough aggravated and become much more than a cold. I had to leave Gokyo earlier than I thought because of my sickness, so, up there, at almost 6.000 m, I left behind two corners I did not explored. Which it means I will return. Which it means I have to forget about the sadness I felt leaving Gokyo Area …. 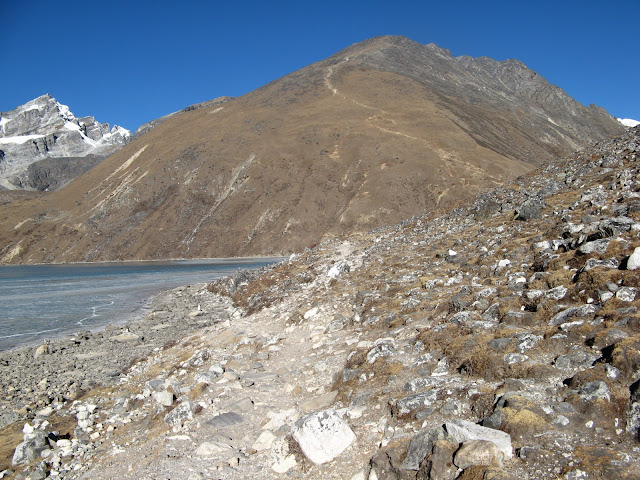 Yesterday evening I went earlier to bed and I slept from 9 p.m. to 1:30 a.m., when unfortunately I had to go out. From that point it was impossible anymore to fall asleep because of the stuffy nose and I had to clean my fluid bloody nose every ten minutes, it was terrible bad. Additional I had an awful headache which obsessed me the entire day. After 7 a.m. I started to pack, it is so much more easier to pack your backpack when you have only 5-6 things to put inside. Before 8 o’clock in the morning I entered the big dinning room. The big Australian group was already on the way to Gokyo Peak, I could see very clearly the long line of red jackets going up on the mountain on the opposite side of the lake. A wonderful, sublime day again, cristal clear sky. It was still warm inside from the fire. When they have big tourists groups, the lodges owners take care to make fire early in the morning. If there are only few  tourists, one ore three persons without any local guide, they do not bother for it. It is not about costs involved, because the yak shit doesn’t cost them money, but it’s easier not to bother about doing fire for one or two persons. This matter can be managed before you decide to overnight in that lodge, but you have to know about this aspect and to openly discuss with the owner from the first moment. Otherwise you will be surprised to come in the dinning room in the morning and to see that they don’t even intend to make fire or you also can be surprised in the evening, when no fire will be start.  Anyway the price for the room and food is the same, doesn’t matter if you get fire or not. This doesn’t influence any costs’ level. 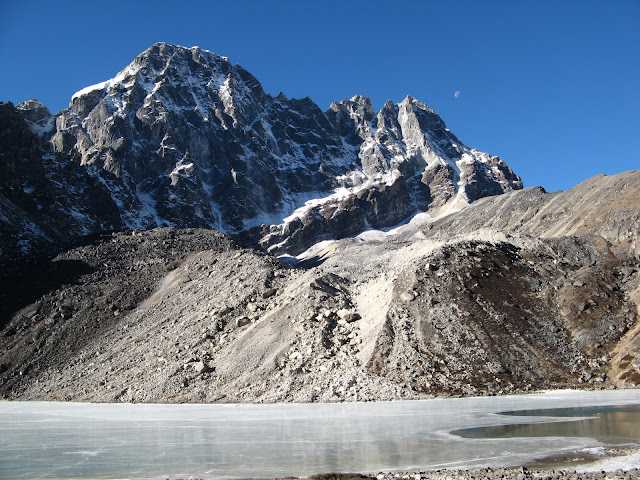 I left Gokyo at 8:25 in the morning, following the same path as two days ago when I came to Gokyo. But this time I enjoyed walking alone. I was sad because I had to leave the area and because I knew that in 2-3 days I will leave the mountains for a long time, returning back to Europe. I hate byes. I walked very, very slowly just to delay the separation and I looked very often behind, stopping, turning around, taking pictures, sitting for few minutes. On the first lake it was a ducks family. I delayed there probably 15-20 minutes. From that point, steepy going down, the landscape was going to change totally.
follow the link and read about some emotions on the way 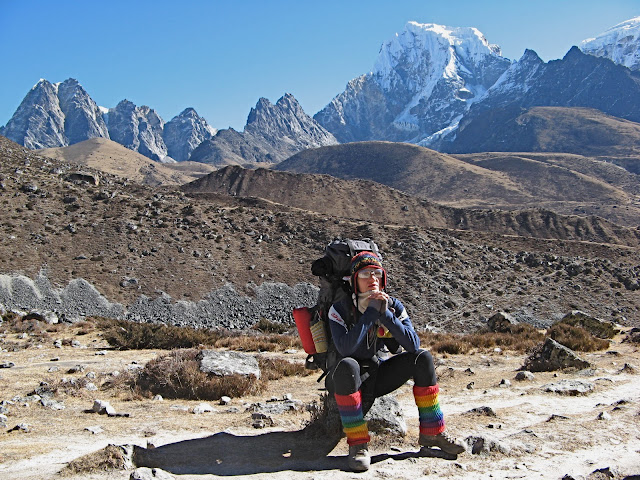 I reached Dhole only after 4 and half hours. I recovered the stuff I left there, I had a small lunch, I had a chat with the Sherpa owner who was alone with the small white sweet dog. Her man was away in Khumjung, so she was alone and the small dog was her joy.
Now, with my heavier backpack, I went further. It was 2 p.m. and I knew that it wasn’t possible to reach Khumjung. I also knew that I had that forest segment with ice falls on the way and I fell twice. Once I almost lost my camera, but I could recovered it. It was a little bit strange that I met very few people and only two tourists groups going up. 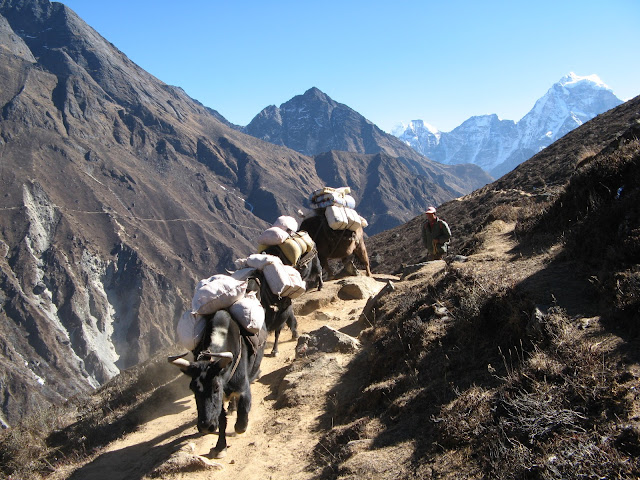 I finished my trek today at 3:30, after 7 hours. I discovered only one hidden lodge somewhere steep down close to the river, so I had to leave the high narrow path in the forest and to go down. I didn’t like the place, but apparently I had no choice. It was a deep buried valley along the river, very cold, of course. Unexpected colder than expected. The host was a boy about 17 y.o. who wanted 100 rupies for the night. I asked if any other tourists inside. It was a lady from Holland with his guide. He didn’t want to start fire before 5 p.m. so I said I have to go outside and walk for a while instead to freeze inside. And I explored the area for about one hour. I was bored and sad. I stopped here because I knew the next segment of the trail will be one of the longest climb to the next settlement and as I was alone, I didn’t want to risk about trekking alone in the dark. I needed at least 2 hours longer of sun light and it was to late for that. 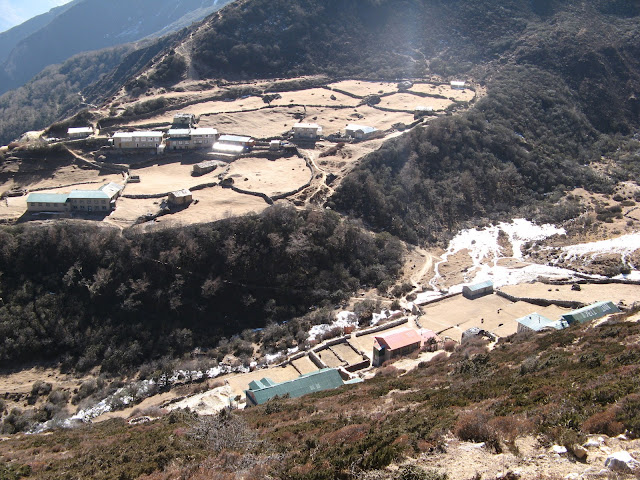 Above Dhole at 1 p.m.
The guy did the fire after 5 p.m. and after ten minutes I went inside the lodge, I knocked on the door of the Dutch lady, even I didn't see her before. I just wanted to let her know that it might be much nicer in the dinning room instead to lay alone in her frozen room. She appeared after 10 minutes, was very surprised that somebody thought about her and we spent indeed a nice evening. She actually belonged to a bigger group, but she was one day later in Kathmandu, so now she tries to catch her group.
I went to sleep about 8 p.m. I still didn’t feel better, terrible strong headache and very tired. As I already told several times, this cold consumes a large amount of energy for human body. Tomorrow will be another long and not easy day. 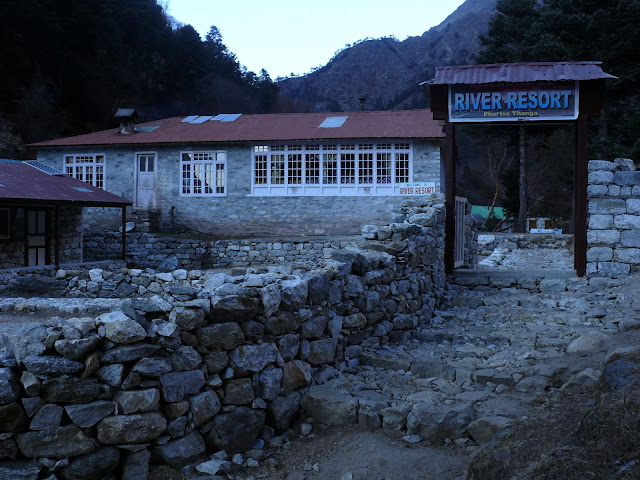