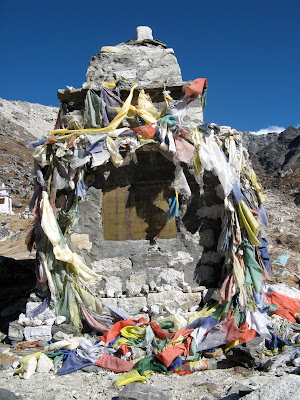 When I look to a picture of a “killer mountain” it happens something strange. It looks deadly ... but I immediately think about a such of occur thing: "how I reach the amount of money for going there, doing this, trying this, climbing there?!?" ....
OK, I have to admit that I never dreamed about climbing Everest until now...... I always said to me that I couldn't breathe over 6.000 m or I would need 3 month of living over 5.000 m high. But something strange is still happening and I remember about my first ascent higher than 6.000 m, in Ecuador, 9 years ago: As I saw the climbers’ cemetery at the foot of Chimborazo, I felt crazy. No, I didn’t want to give up the climb, but only in that moment I realized the really exposure to the risks. And the local guide we had then and who paid something for us, said to us that evening: 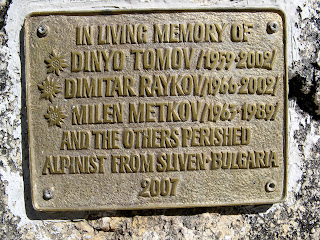 “So, people, I would like to have the money from all of you, as we start to climb at midnight.” Clear text: “And if one of you die on the route, I stay unpaid.” It was about one dollar from each of us and we were 5 people ….  Of course it is difficult to comment this, but I was shocked. The man had right actually and in a very pragmatic and almost rude way, he wanted to be sure about his 5 dollars. He didn’t think about the fact himself could die on the route. 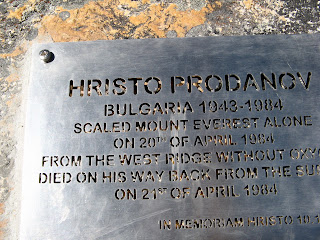 Coming up here to Lobuche before yesterday, alone, reaching the Tukla Pass at 4.830 m alt. and seeing all the memorials to so many different people who died on their trail to different destinations of this area, of course including Everest mostly, I just took a break of 15 minutes to look around and memorizing everything I saw in that moment. I couldn’t stay longer in that amazing place, I just wanted to go forward, further and higher, I wanted to find my trail and to reach the 5.000 m alt. that day. I just find occur that you don’t feel as wanting to give up the entire story. You are tired, alone, I didn’t meet someone for about three hours, I even wasn’t sure at 2 p.m. that I follow the right trail, but the force which pulled me was much stronger. So …. Let you go with the wind is such a nice metaphore and becomes so real in this context ….. I am just going with the wind ……….. 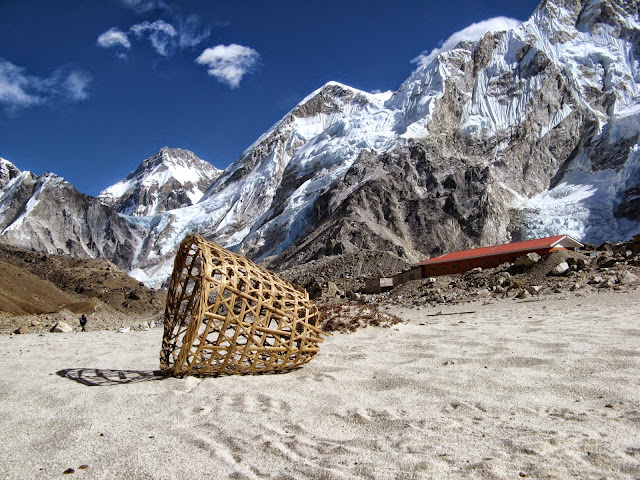 And yes, I described the trail of yesterday, going from Lobuche to Gorak Shep for the first time, but I didn't mention anything about the other memorial you meet just before climbing up on the Kumbu Glacier ..... you see? It seems not human sensitive, but after you pass along so many memorials and you read: 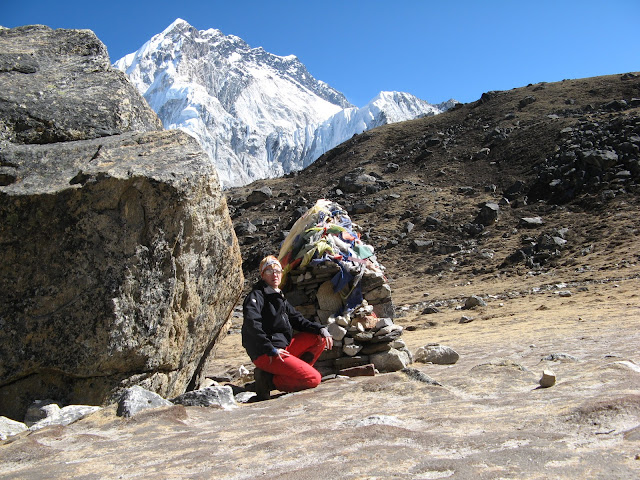 "he climbed Everest alone and died on the return way" or "he was on his way to the top of the world" and so on, you  will stop looking at them, you will stop reading all those memorial words, you will stop taking pictures of them and you will finally ignore them .... think about the place of Pashupatinah in Kathmandu, where the death is almost a living subject and the people are looking at it every day and every night .... is the death just a part of our lives? What's so big deal about it? 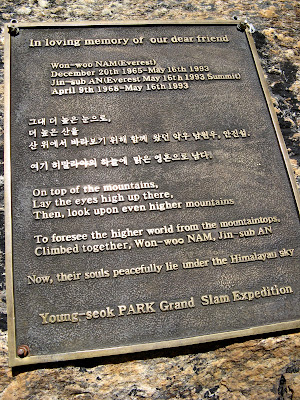 Diary notes:
”Lobuche, 17:45
What a day! I’ve just get high fever again. I couldn’t sleep last night at all, at least five minutes! And this despite the better accommodation conditions. I had -15°C in the room over the night, this is meaning that last night in that summer and very old lodge were about -17°C. I was terrible tired and sleepy, of course, but today was a long and exciting day, Kala Pattar Peak – the original base camp for Mount Everest ascent - was on the agenda. 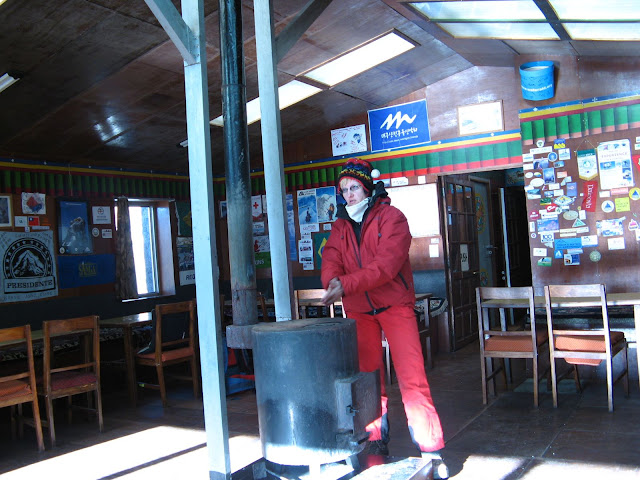 So, at 7:10 I left my warm sleeping bag and started to be ready for the day, at 7:30 I ordered the breakfast and at 8:30 we left the Hotel. It was terrible cold outside too, but the sun just rose few minutes before and everything around was bathed in its beautiful light and warm. Wonderful day, perfect weather! We reached the settlement in Ghorak Sherp at 11  o'clock and stayed for about one hour inside, drinking tea and hot chocolate. We didn’t intend do be so late staying there, but then it came a terrible sand storm on the valley and we had to cross that white sand desert in order to reach the ascending path to Kala Pattar. Everything was flying in the air: plastic chairs and bags, cartoon boxes, papers, wood, just everything. The dinning room where we were taking a seat was outside, exposed like a sort of terrace, very nice and small, but made only from some wooden boards and we had the feeling it will be soon taken by the wind! 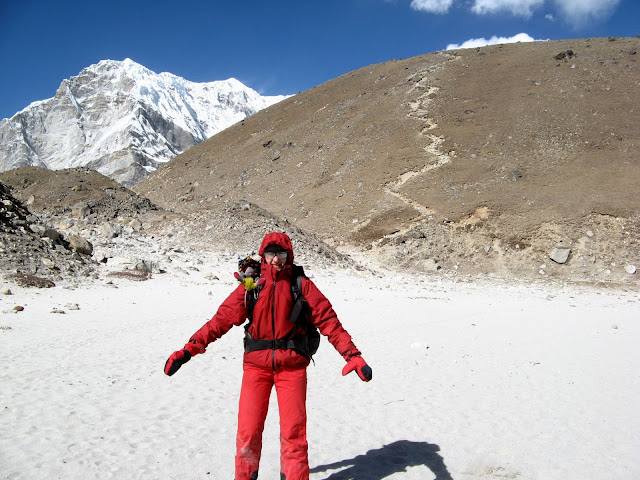 The strong wind is coming from my left and from behind too,
so I had to have very fixed legs on the ground
We started our walk at 12 o'clock. I was fascinated crossing the white sand plateau – this is actually an ancient lake bed, which now contains a small lake on the right, coming from the glacier, and a helipad -, incredible scenery. So empty, so deep between those rocky and icy giants, some yaks around and no people, some baskets in the wind. Absolutely fascinating. I was lying on the sand as you lie and make angels on the snow, if you know what I mean.
The ascent makes its way up a series of steep switchbacks before leveling off somewhat as it traverses to the eastern side of the mountain. At the begining, for about one hour, it is a crazy steep zigzag which climbs from 5.164 to about 5.350, then it comes a down plateau, not so steep, very wide and exposed to the winds from all directions. Soft ground actually, but because so dry and frozen, quite hard this period of the year. In the summer I suppose is all only green high grass here. After about half an hour you start to climb on the dark big rocks. Khala Pattar is actually meaning „The black rock“. The main reason why many trekkers attempt to summit Kala Pattar is that it provides the most accesible point to view Mount Everest from base camp to peak (due to the structure of Everest, the Everest Summit cannot be seen from the base camp). The trail becomes steep once again until it reaches the wind-swept summit ridge. From there, a five to 15 minute scramble over boulders takes one to the top. 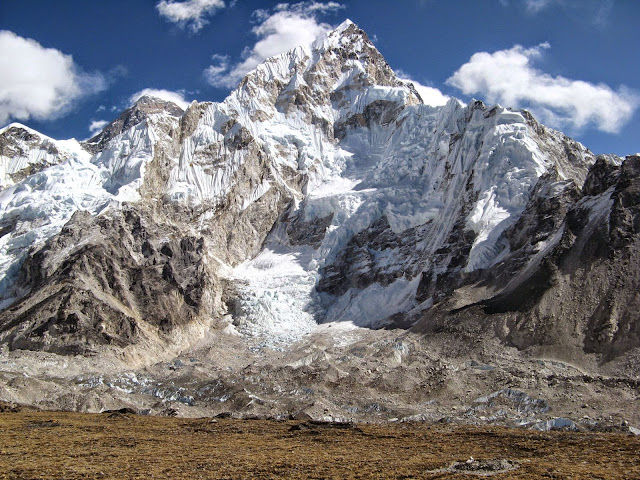 Magnificent Nuptse (center, sharp) and the Summit of Everest
Kala Pattar appears as a big brown bump below the impressive south face of Pumo Ri (7.161 m) and climbing on it you feel crushed by the greatness of the white giant behind which the Tibet is lying.
About 20 m away from the summit the wind became really creepy and dangerous, Andy, Claire and Peter stoped and returned. Difficult to describe, but the wind can give you a scary feeling indeed. It was 2 p.m.. The views from Kala Pattar of Everest, Lhotse and Nuptse are spectacular. In my madness I climbed a flat rock, on a higher lever, terrible exposed, I managed to take out my camera from the backpack and I filmed a few minutes. I had to keep my feet very stiff. With mine 58 kg per total were not great miracle to be strucked. I really struggled to keep filming, but after my fingers were totally frozen and I couldn’t keep balance anymore, I had to give up. I was alone, nobody behind on the mountain, the other three guys were already too long distance from me, so I packed my camera, looked around once again and started to descent. 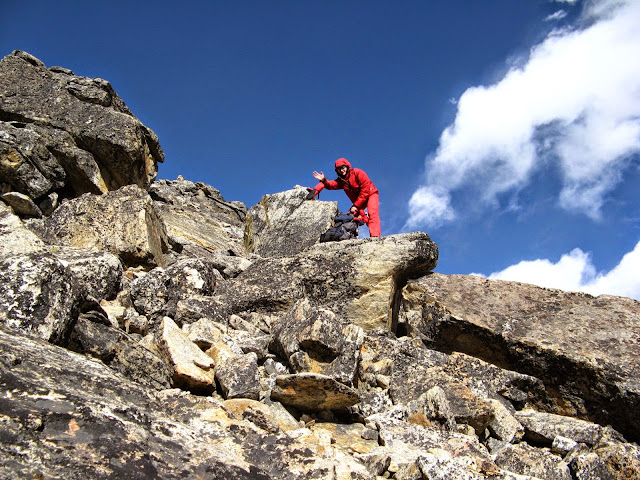 Hardly to believe, but in 8 minutes I descended what I climbed up for one hour on the rocks!!! And in 30 minutes from the summit I reached the ancient river bed at Ghorak Shep (2 hours up and half an hour down).
It was pretty late to leave Ghorak Shep at 3 p.m. – as we didn’t intend to stay over night there, because next day we plan to leave Lobuche and have the probably longest day of the trek to Gokyo Lakes Area -, so we had a strong march to Lobuche, which we reached in two hours. It was already crepuscule and terrible cold again, no sun, as we reached our Eco Hotel.” Let the video play with loud sound.
So, this was the day of Kala Pattar Summit, no further descriptions needed.
Only that I had a great Sherpa Stew for 320 NRP: 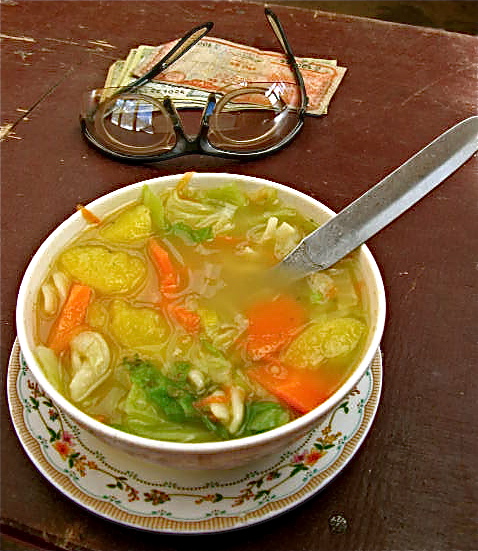 And only that being on the top my right eye suffered a burst blood vessels and for several minutes I had some problems, but every step descending in altitude improved my eyesight. Great day, I have only one desire: to sleep! Tomorrow it will be terrible long, so I have to get better over the night. 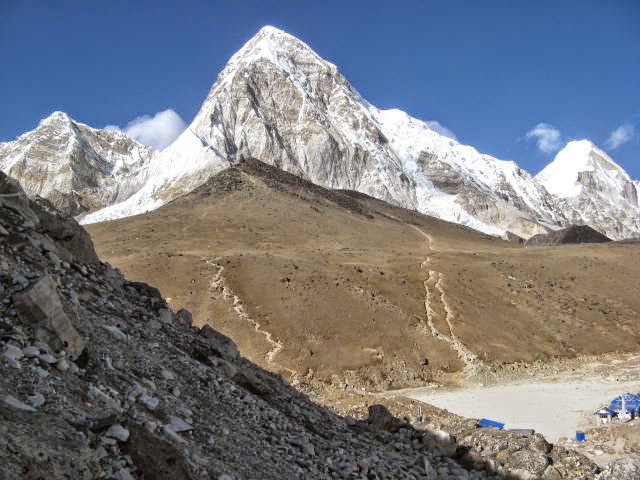 
read here the daily schedule of the entire trekking
READ HERE about the next day
N.B.