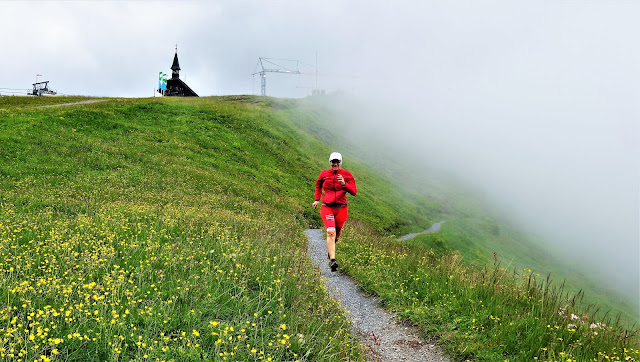 Trail Running Schmittenhöhe Berg: 20 km, 1.000 m uphill
Wow! Again and again ..... just a perfect day for running, again and again running/walking on an empty mountain ..... with the clouds!
A spontaneous long run on Monday.
Yesterday it was a quiet, silent day and I didn't feel like going out. Not at all. I slept longer and Marty decided to go visit some friends of him. I wasn't in the mood for anybody and for anything, anyway. I have such days, even I do not always love them. But know I just try to work on myself (again), to keep the mind clear of thoughts. Challenging task, you need years to overcome the habit.
But something new happened in this cointext: I drew again! I drew a new drawing and I finished an old one that I started two months ago! And I opened my unfinished book and wrote new pages on it. So, it happenes something all the time and these life phases when you are in a sort of "waiting room" are not by chance here, there is a reason for it. 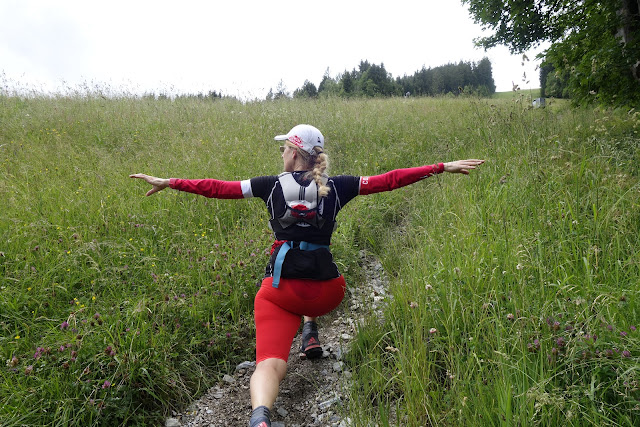 I took the weight vest, 4 kg of sand on the back. I have to say that during the run, 4 hours long, I even didn't feel it. I had a small bottle of water on the waist and a thin rain/wind jacket. Cloudy day, agreeable temperature. Just the perfect day for a long trail running.
The trail steepy starts just behind the building where I still live. Thousand meters uphill for the first km does mean a vertical run. I never got so far on this mountain, but today it was the right time to reach the highest point at 1.970 m: The Schmittenhöhe.
I run on this mountain for 6 months now, starting 2nd of December, 4 days after I moved out here. Fascination pure. It is a green, not a rocky mountain. A soft mountain with plenty of options and trails.
After about four kilometers, taking plenty of shortcuts through the forest - abour 1 km shorter, but steeper - I reached the Areit Lounge, the first "level" of the mountain, where a big restaurant and ski slopes starts and where you change the cable cabin to go higher.
But the Areit Bahn is still closed for big revisions after a crowdy miraculous winter and ski saison. This is why the entire area is pretty empty. Who wants to reach the peak by cable has to go to the other cable which starts somewhere in Zell am See. For me is just perfect!
The way go steep uphill to Glockner Haus and the 2nd Water Reservoir. 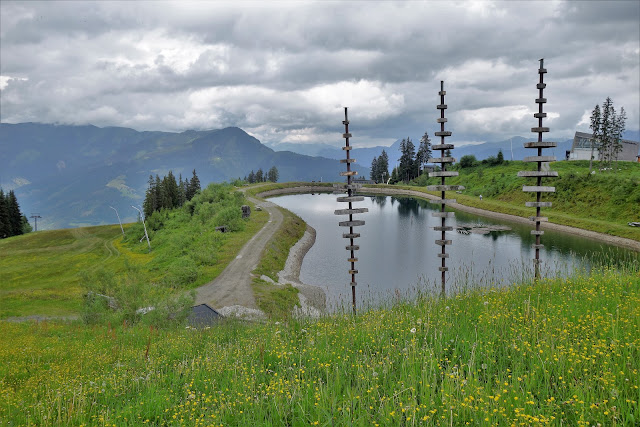 After Glockner Haus there are two ways to the Schmitten: a forest path on the left and the mountain larger road. I choose the narrow forest path that is steeper. 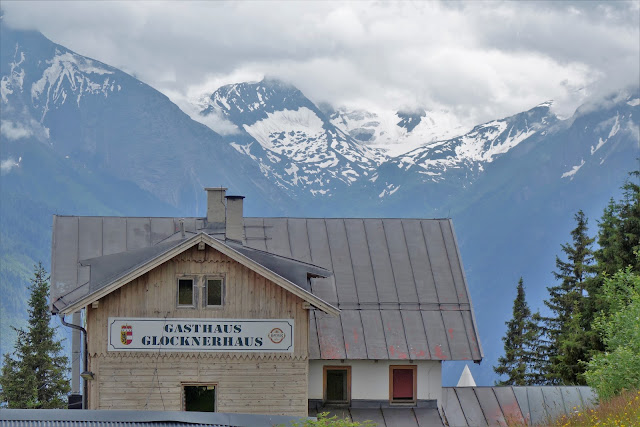 The path meanders through the forest in a very idyllic way. You can be anywhere in the world, if you want. 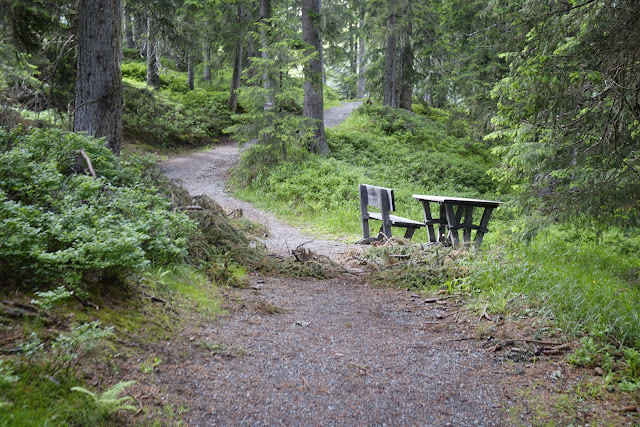 It is pretty amazing how I always find fascination in banal things that most of the people do not even remark. The scenery with the wooden table and banc at the edge of the path made me stop and take the picture and I do not get enough looking at it. The beauty of silence, the beauty of simple things, the curved path, the high trees, the vivid green ..... so much emotion. 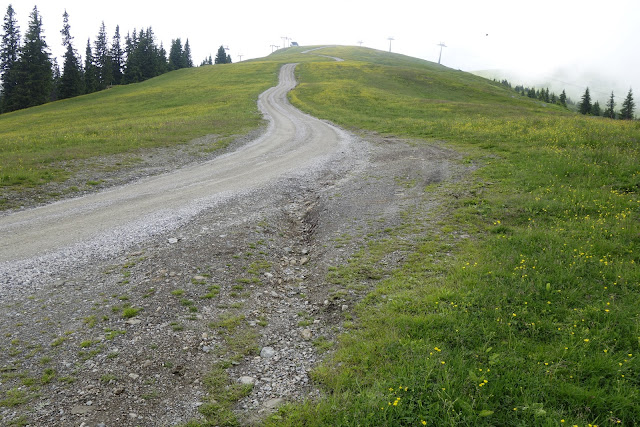 The long way to the sky in front of me .... clouds and fog running from the right directly into the path I was going to follow .... exciting, just exciting!
Zooming the image to what I was thought to be the highest point of Schmittenhöhe ..... a construction site? 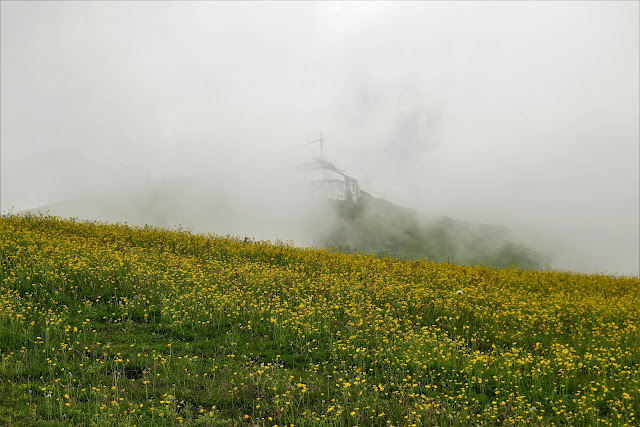 Austria entirely is a construction site, all over the country is been built .... houses, hotels, infrastructure, roads .... all over.
And looking back to the Zell am See Lage .... divine .... 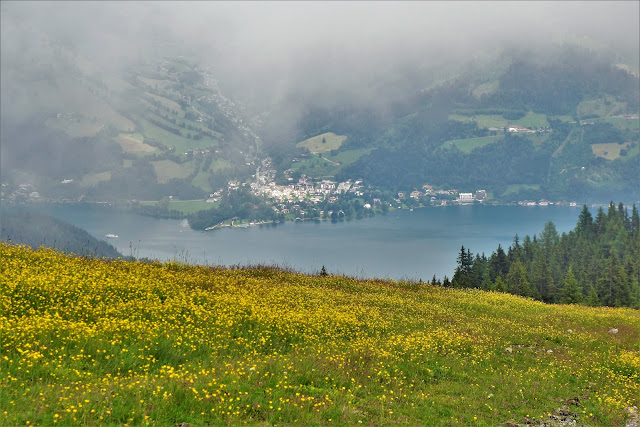 And looking ahead while uphill running .... 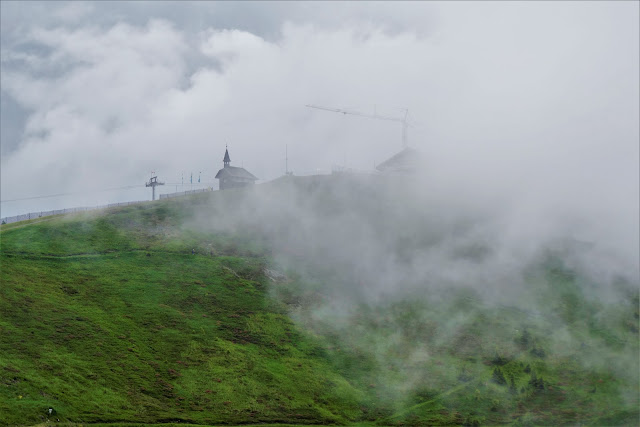 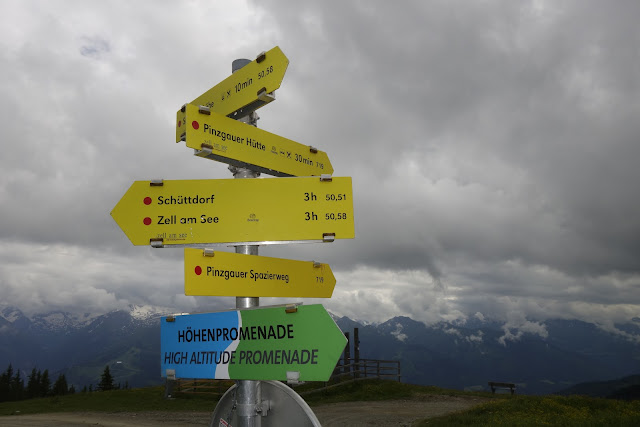 I reached the Schmittenhöhe at about 16:40.
A small charming wooden chapel attracted my attention ..... as I didn't expect to see one here, so I went inside. 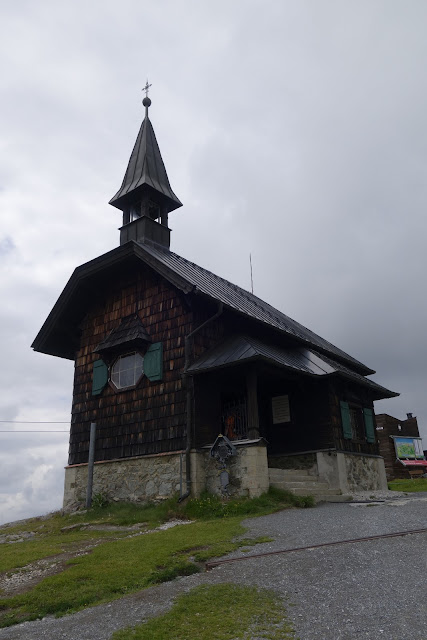 The Elisabeth Chapel
On 7 August 1885 at 8:00 p.m., Empress Elisabeth, fondly known to posterity as Sisi, arrived in Zell am See on a special Imperial train. She stayed at Hotel Elisabeth, which no longer exists. Before the construction of the Schmittenhöhebahn, guests were carted up to the Schmittenhöhe over a bridle path in a horse-drawn coach. Elisabeth didn’t wish to be transported in such a fashion, so on 9 August 1885, she departed with mountain guide Anton Ullman of Zell am See at 1:00 a.m. and hiked up to the Schmittenhöhe to view the glorious sunrise. Along a moderately steep bridle path, the ascent ordinarily took approximately 3 hours. Elisabeth, avid mountaineer that she was, completed the ascent in just 2 hours and 16 minutes. Sisi was an ardent sports lover, keeping fit and slender through hiking, horse-back riding and fencing. 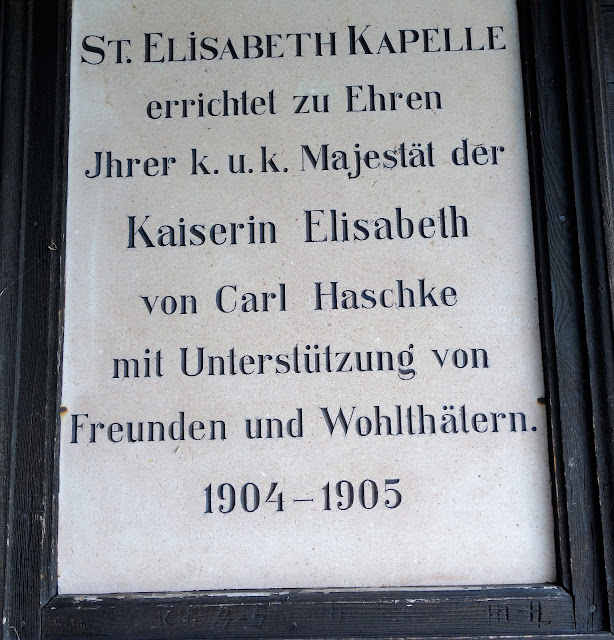 Planned during 1904/05 by supporters Carl and Emilie Haschke as a memorial chapel to Empress Elisabeth according to designs by architect Josef Wessiken of Salzburg. Under the supervision of Jakob Menis of Zell am See, a carpenter and a mason (Strassgschwandtner and Herzog) both hailing from Zell am See, then built the Sisi Chapel. 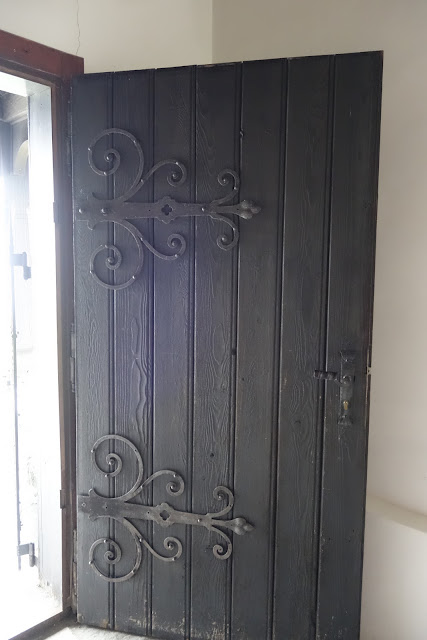 On 10 September 1908, on the occasion of the 10th anniversary of the death of Empress Elisabeth, Dr. Johannes Baptist Katschtaler, Archbishop from 1832 to 1914, consecrated the chapel. There is still a personal souvenir of Empress Elisabeth to the left of the altar.
Until its sale to Agricultural Association and Zell Forest Association in 1984, it was part of the hotel property on the Schmittenhöhe. Its last proprietor was Franz Gramshammer, a hotel owner in Zell am See (Grand Hotel). 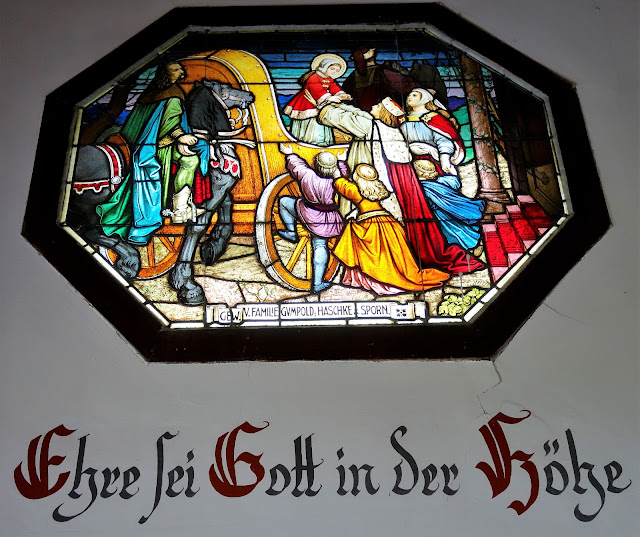 From the Chapel, a short round-trip named "Sissi-Rundweg" starts. 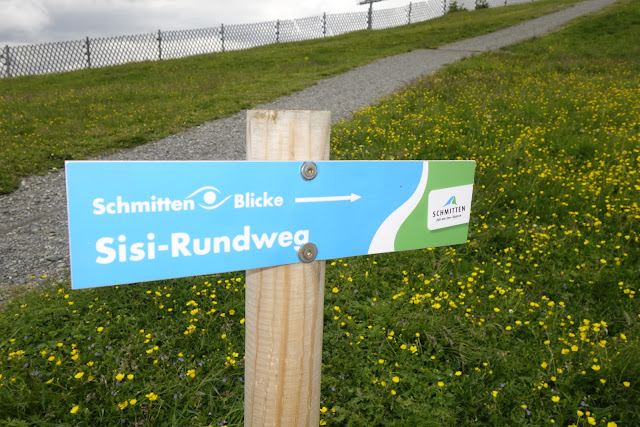 Sisi’s circular path is a short walk, only one kilometre, starting from the Elisabeth Chapel situated on the top of the Schmittenhohe. The walk is full of interest as in addition to the marvellous views there are information boards which detail the life of Empress Sisi.
Elisabeth Eugene Amalie, nicknames Sisi was the daughter of Duke Max of Bavaria and Ludovika, the Bavarian King’s daughter was born in Munich on 24th December 1837. The family spent their summertime on Lake Stamberger See in their small castle, Possenhofen, leading to a carefree life. She grew up happy with her seven brothers and sisters.
Sisi’s mother Ludovika, a daughter of Bavaria’s King Maximillian 1, was the only one of three sisters who did not marry into a Royal family. Her husband Max, was a Wittelsbacher, thus he was accorded the title “Duke in Bavaria” only upon his marriage. Conspiring with her sister, Sophie, the emperor Francis Joseph’s mother, Sisi’s mother Ludovika secretly tried to marry her daughter Helene to Francis Joseph. The prearranged meeting of the families did not go according to plan and the Emperor Francis Joseph fell in love at first sight with the young impetuous Sisi. They were married in a magnificent imperial wedding ceremony on the 24th April 1854 in the Augustinekirche in Vienna.
Sisi the traveller.
When Empress Elisabeth was ailing from coughing and respiratory complaints in 1860, she was inspired to take her very first trip abroad alone. She went to a spa in Madeira which gave her the opportunity to escape the rigors of court life. On her return to Vienna she suffered a severe relapse. Her doctors diagnosed “consumption”. The Empress departed to a spa on the island of Corfu.
Her escape from Vienna’s Imperial Court in 1860/61 launched a journey which was to continue up to her death. She travelled throughout Europe, to Asia Minor and to North Africa. When Elisabeth returned to the Imperial Court in Vienna after an absence of almost twenty years, she had transformed from a pale, shy young woman to a self-confident monarch.
Stretching out ahead of me I could see the High Altitude Promenade. I was tempted to do it now but decided to leave it for another day and concentrate on Sisi’s walk.
Empress of Austria and Queen of Hungary.
At the beginning of 1867, she succeeded in reaching an accord with Hungary, despite strong opposition from her mother-in-law and members of the Imperial Court. On 8th June 1867, the coronation of Emperor Francis Joseph and Empress Elisabeth as King and Queen of Hungary took place in the St Matthew’s Church in Budapest.
Children.
When she was 17 years old, the young Empress Elisabeth gave birth to a girl, who was named Sophie Friederike. A year later another daughter, Gisela was born. In 1858, Crown Prince Rudolph Francis Carl Joseph was born. Her fourth and last child, Marie Valerie Mathilde Amalie was born in 1868 in Ofen, Hungary. Sophie died at the age of two from diarrhoea and fever. Crown Prince Rudolph committed suicide when he was 31 at Schloss Mayerling in Lower Austria, together with his mistress, Mary Vetsera.
The assassination.
On 9th September 1898 on the shores of Lake Geneva.the Italian anarchist Luigi Lucheni stabbed Elisabeth in the heart with a knife he had made himself. She managed to board a lakeside boat but then collapsed. She died a short time later in her hotel. The internment took place on 17th September in the Kapuzinergruft in Vienna.
Source about Sisi: crosbyman66.wordpress.com
Back to my running day through the clouds: 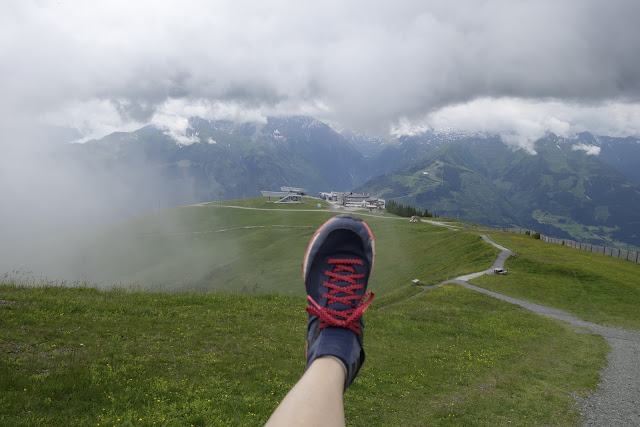 It was 5 p.m. and the last cable cabin descended from the Schmittenhöhe nach Zell am See. I could have take it, but I didn't want to finish the marvellous day on the mountain, so I decided to run back to Schüttdorf instead. 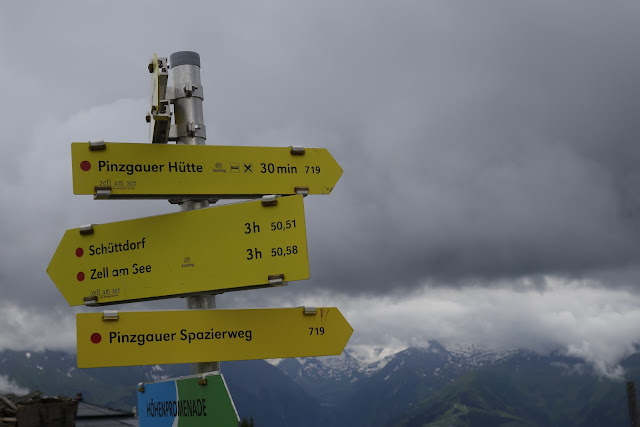 It took me about 4 hours to get here, so in about 90 minutes I could be back home, by running most of the trail. 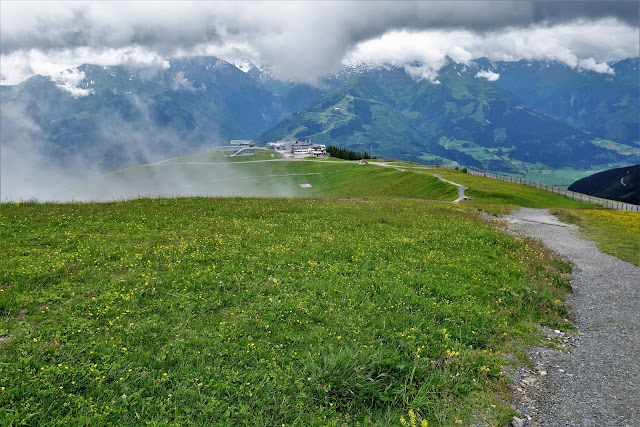 It was a relaxed nice long descent over 1.000 m and I enjoyed every single moment of it. 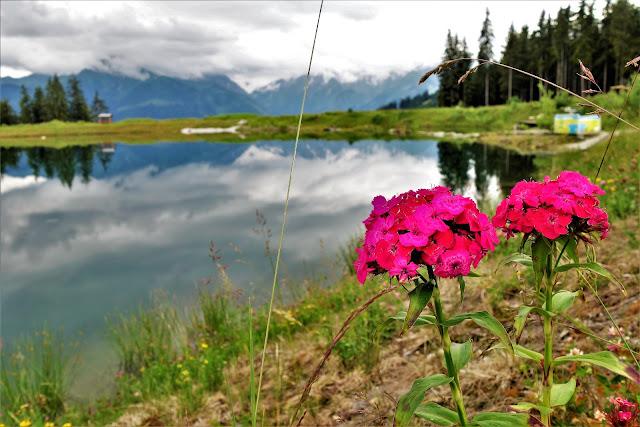 I knew I will reach town on the day light, so I was worryless. 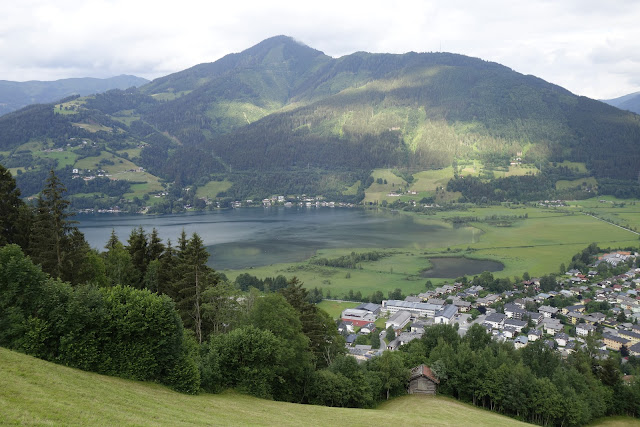 A good bath, looking to the pictures, writting the blog and a good long night sleep :-) 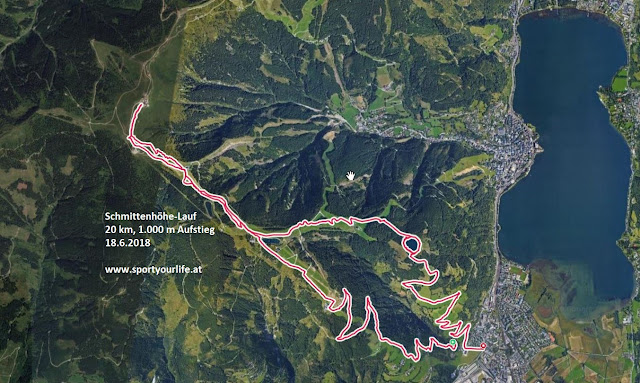