Crazy enoug to ride with neoprene!

Nice weather, sunny during the day, chilly .... until about lunch time. When it became cloudy and started to rain. Endless rain ... After the slowly and nice run yesterday, with Inuak (18 km running and talking) ..... 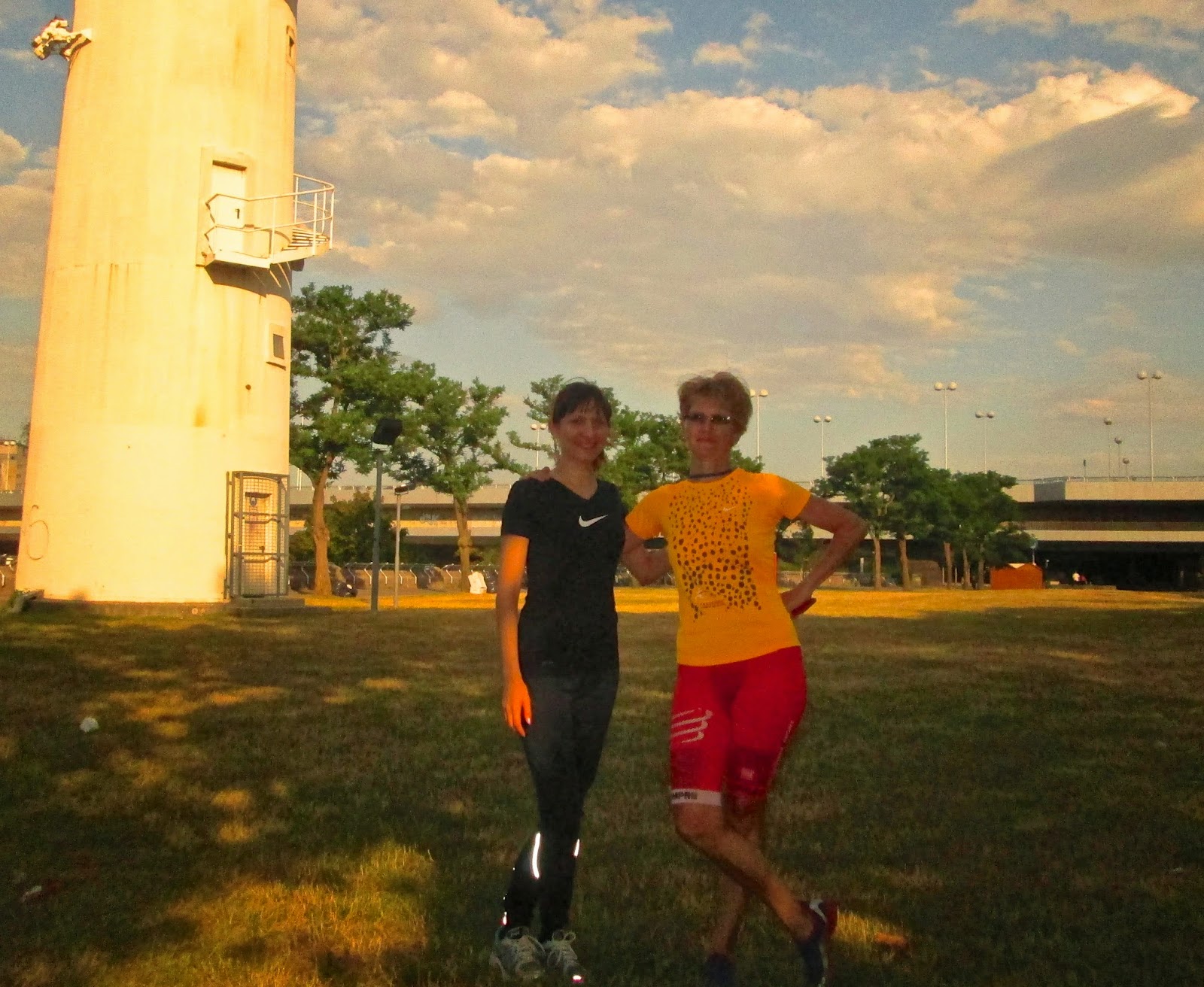 the plan today was to go swimming in the Danube.
So, I cycled home (8 km), I spoiled the cat a little bit :-), 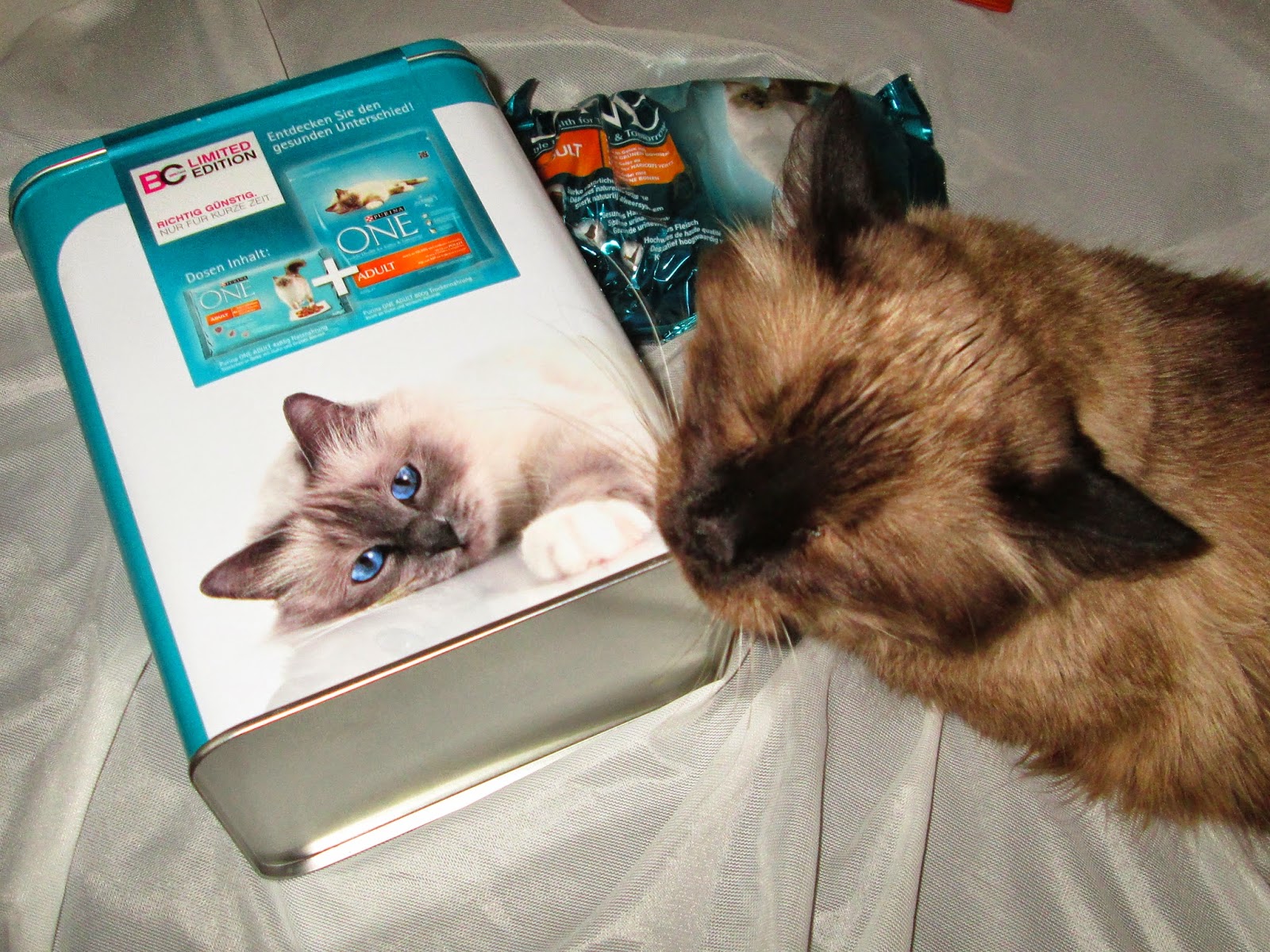 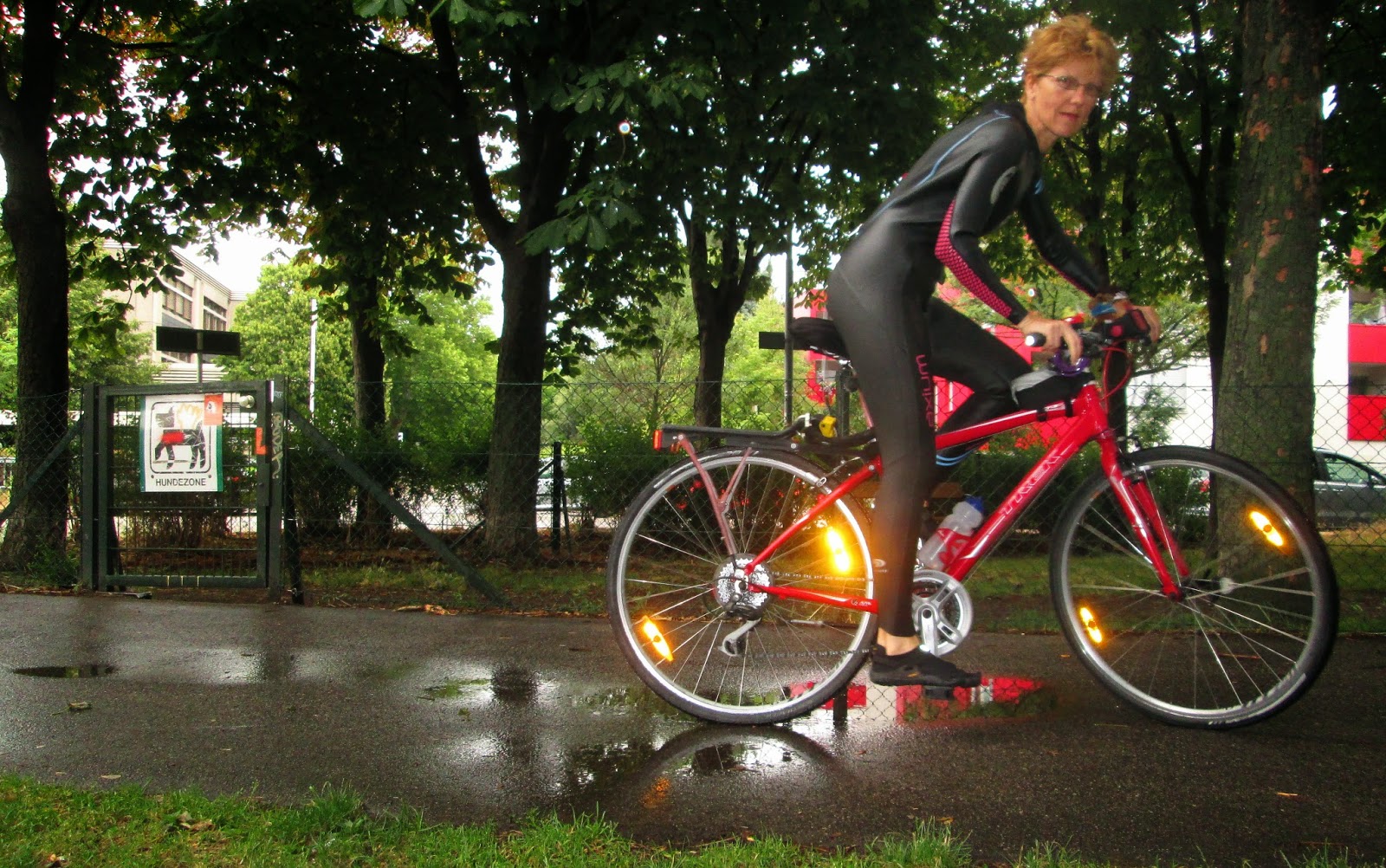 The last time I used my neoprene was ... two years ago!!! Summer 2012. As I thought I hear some strange sounds, I stopped .... WTF?! Is my butt bigger and the neoprene cracks now?! 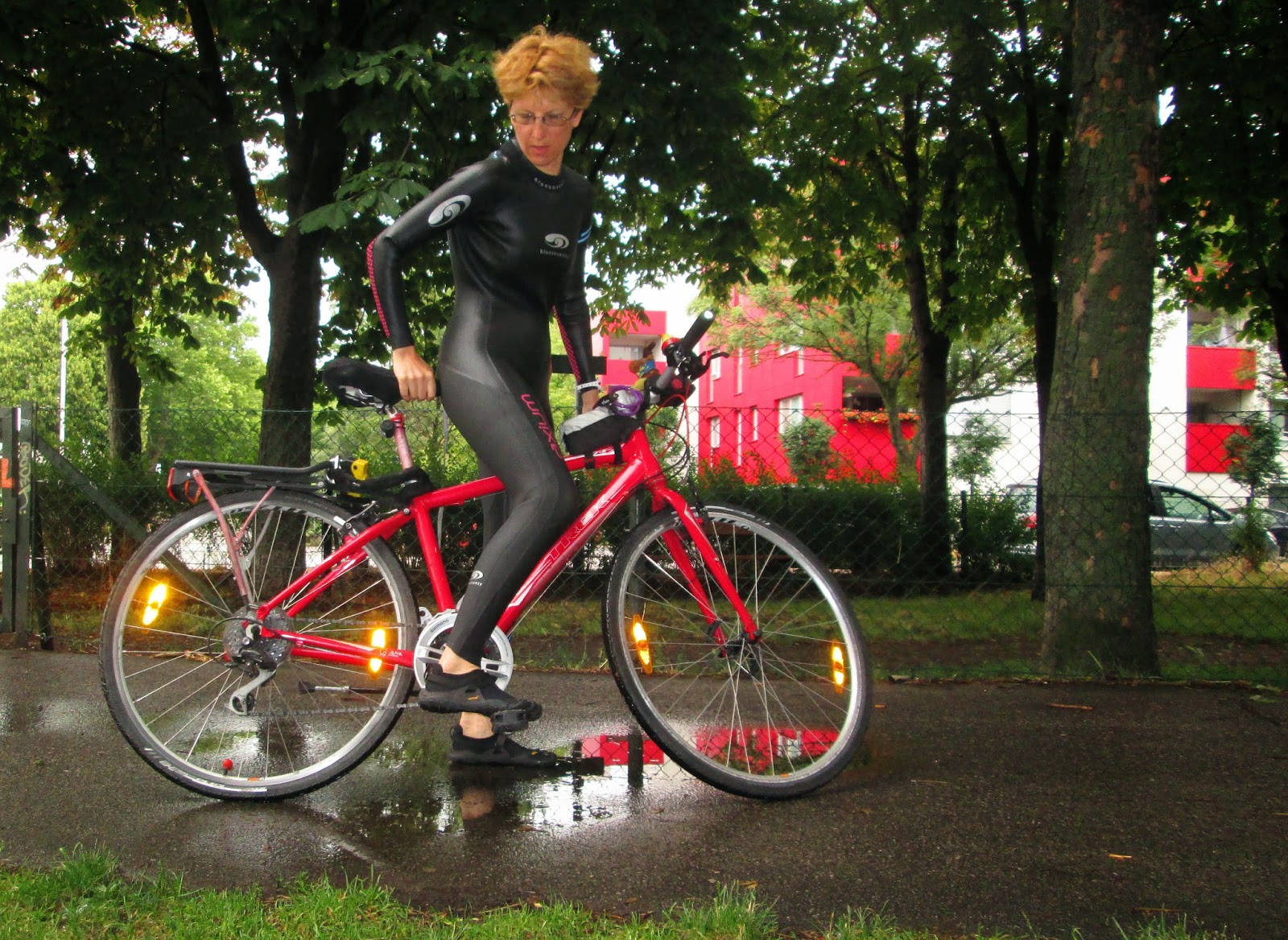 So, after about 3 km I found a spot to get ready for a longer swim. Nobody around, no boats on the water :-(, just a few runners. 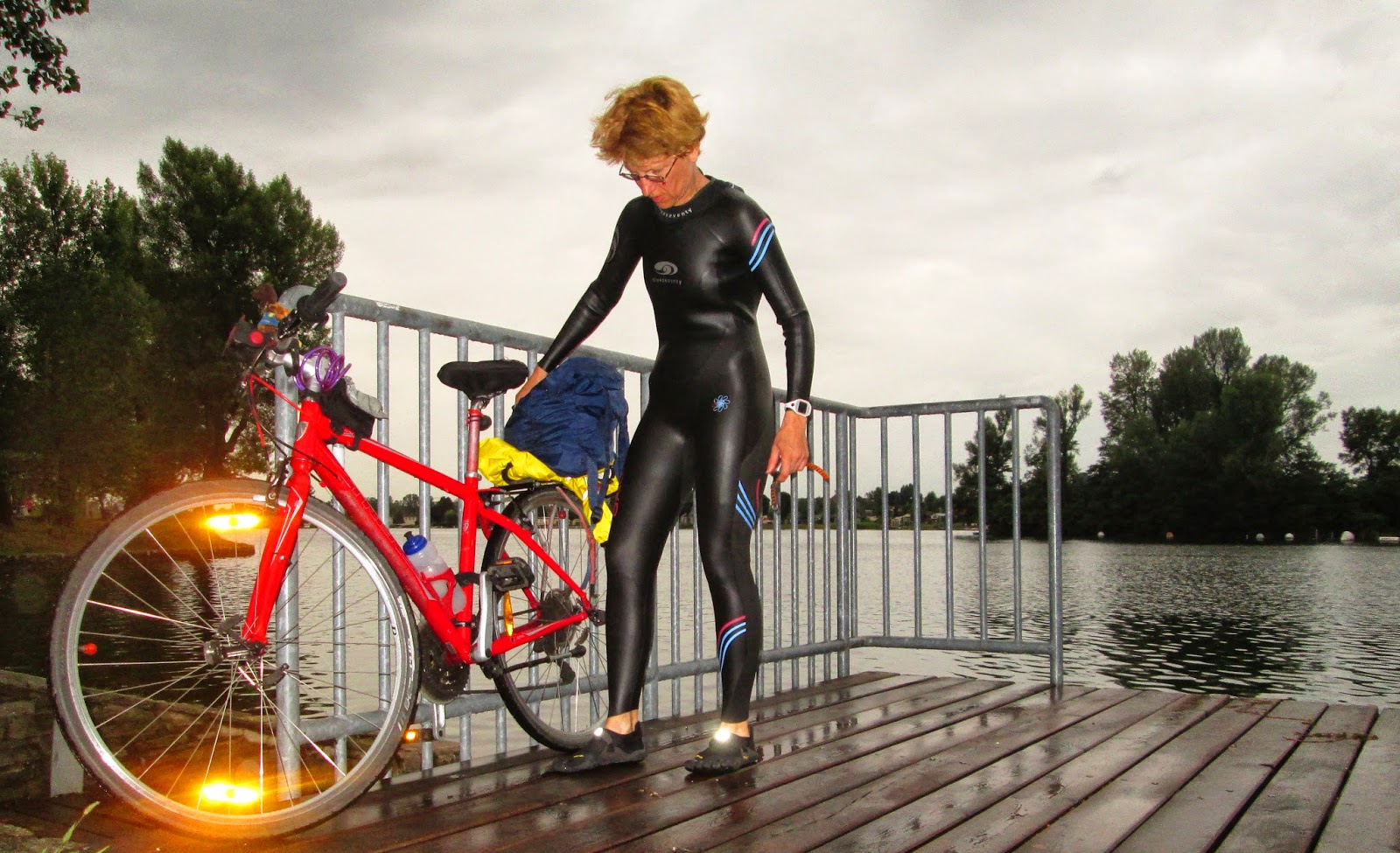 I love the swim cap we've got in Oradea, in our ironman kit. It is the best! 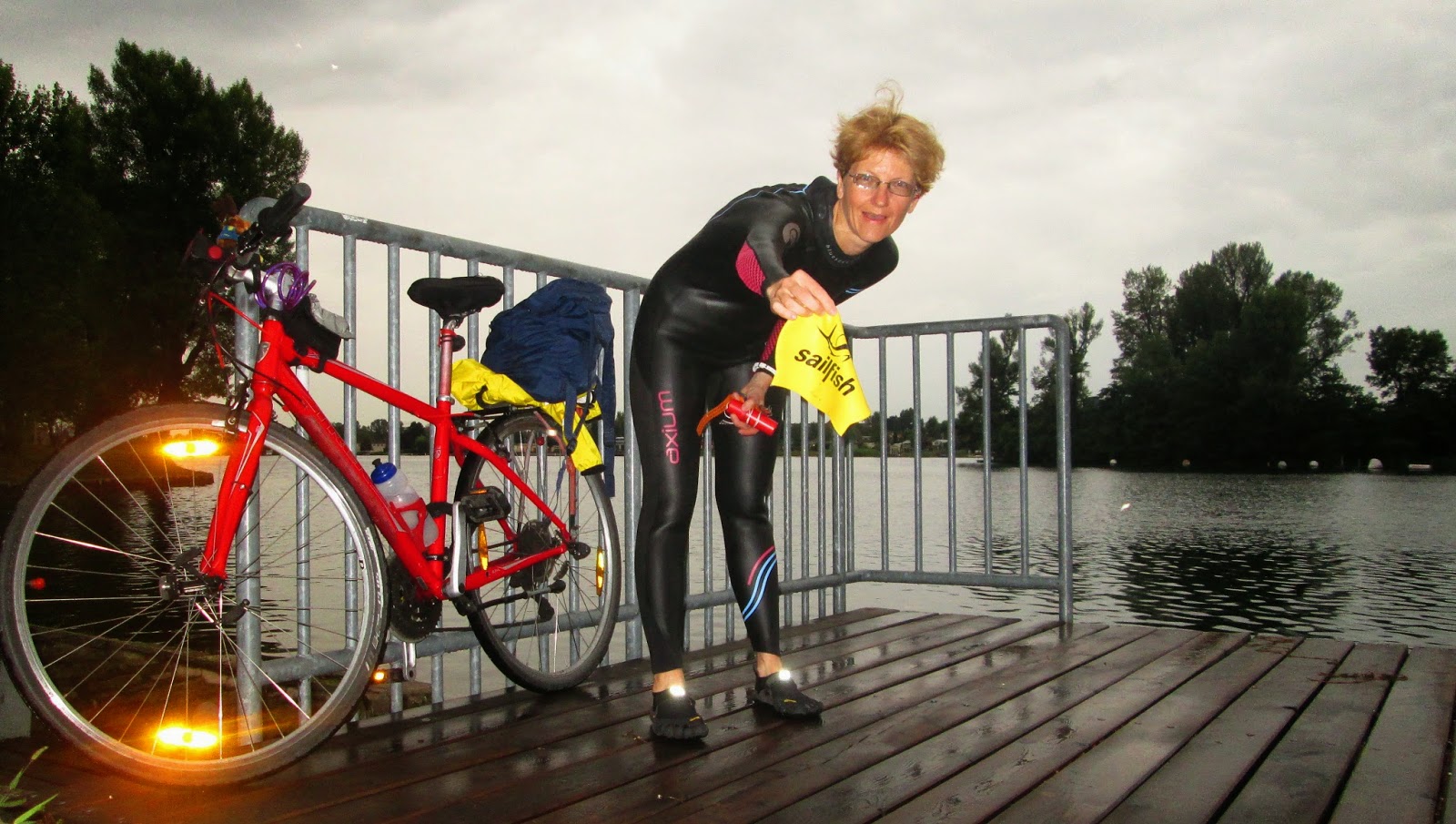 So, 55 min for 2 km, alone in the Danube .... the feeling cannot be described. The rain was persistent and soft.
Swimming with neoprene is a different world. I had forgotten how it feels to swim with neoprene. I was faster about 3 minutes per km and I also foolished around for 2-3 minutes. 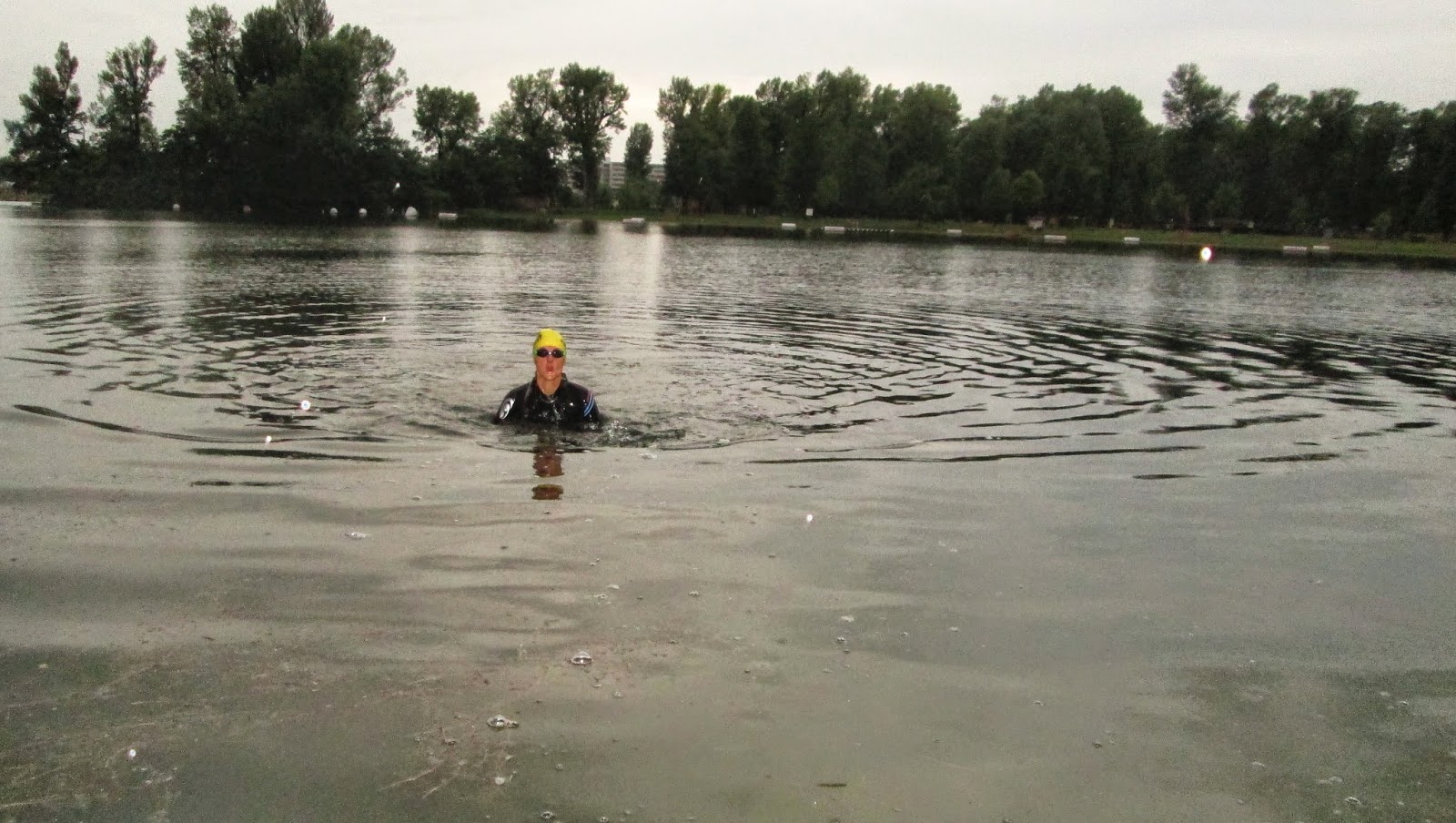 It was absolutely great, although a little bit weird sometimes ...

I never swam before alone in an open water, a large river, on rain, far away from shore ..... weird feeling, I felt crazy enough and incredible enough ... me, doing this?! I do not think so ... 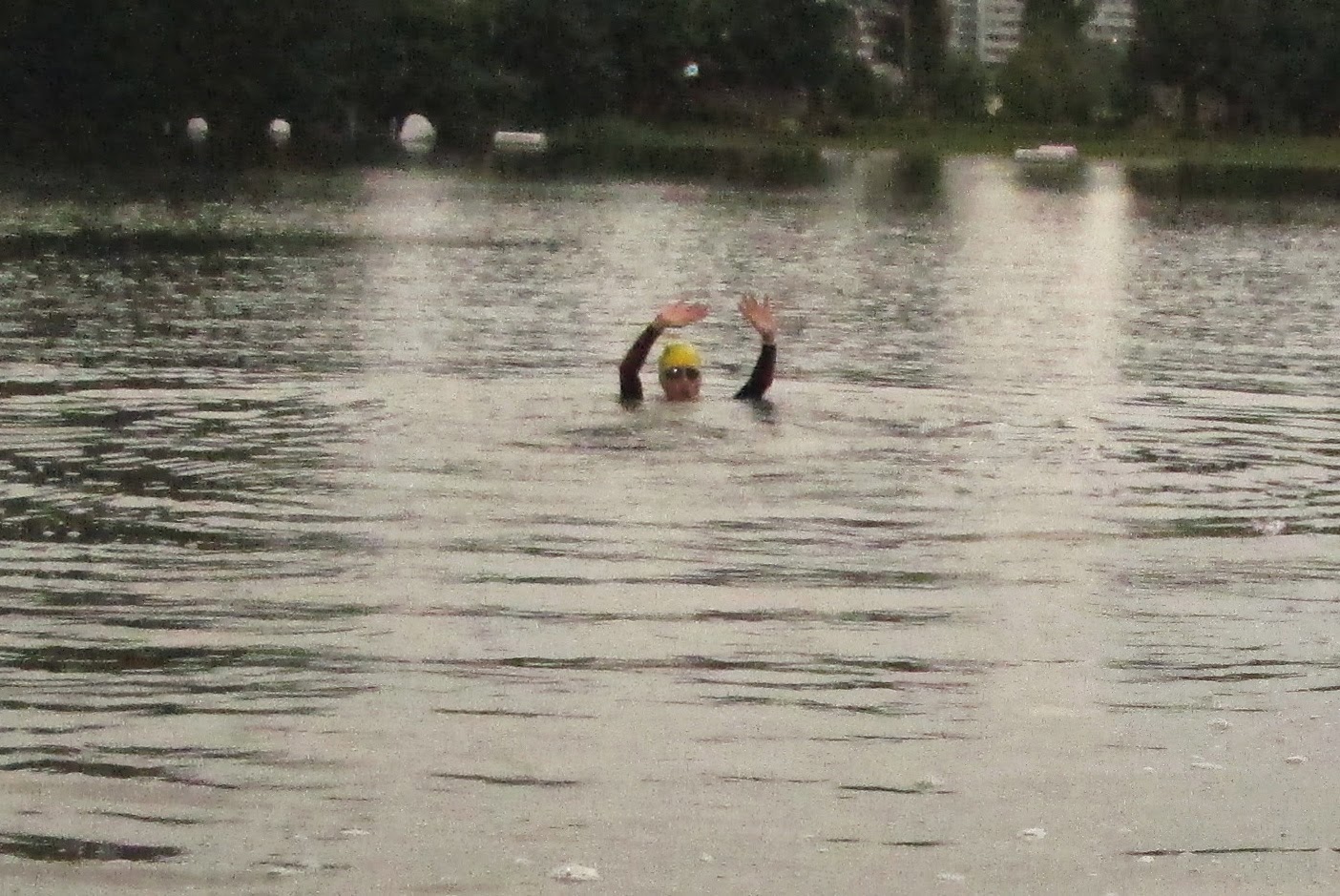 I often still have the feeling I watch a movie ..... and the main character seems to be me, but I am not sure ...
Shortly before getting out from the water a man and a very playfully nice dog crossed the place where I let my bike.
The dog stopped on the shore close to the water and started to look at me. I approached the shore and I felt I have to speak to the dog :-), as he was incredible persistent and watched me in a very funny way!! 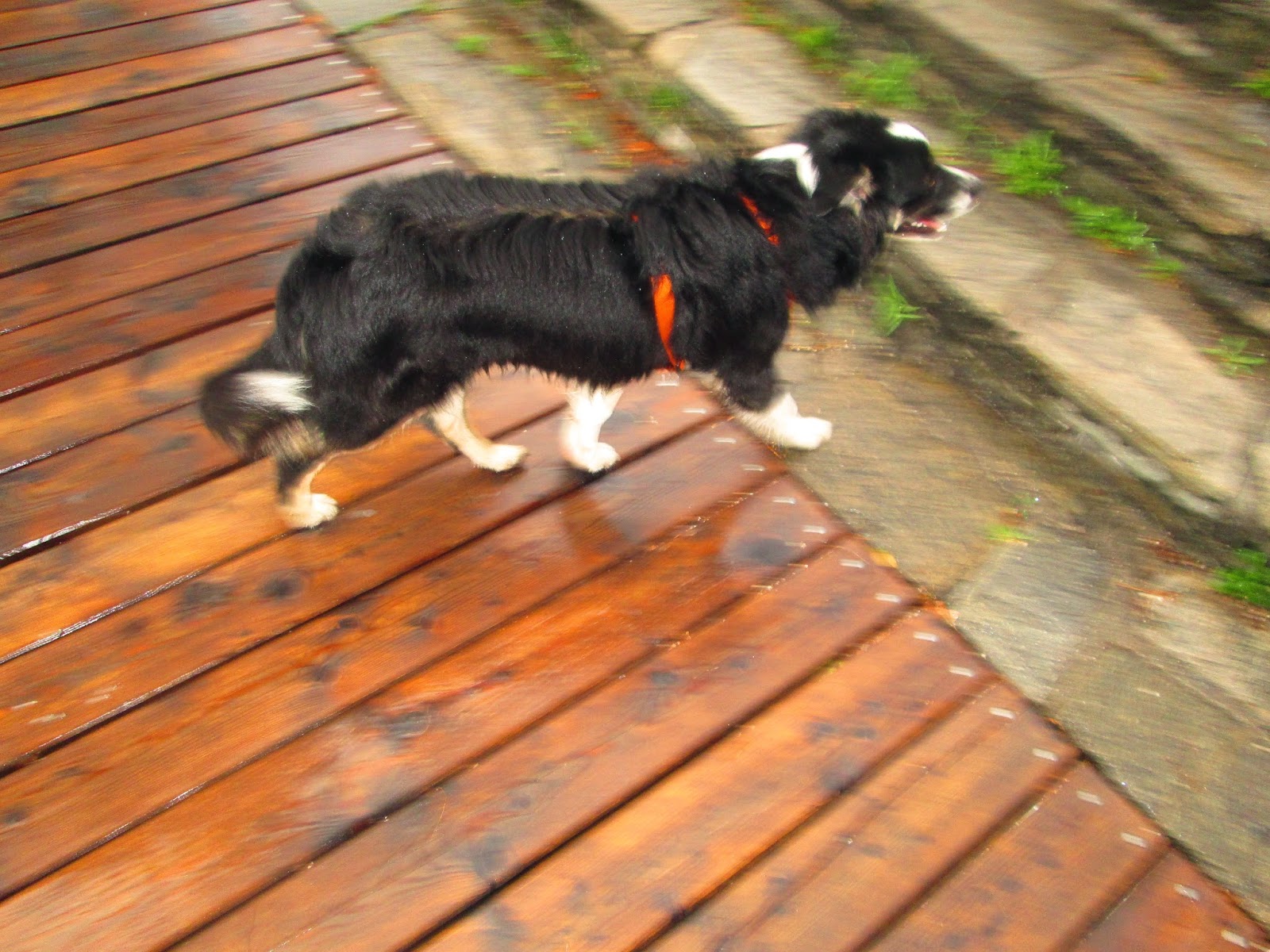 He jumped on my, oh my God, on my neoprene (!!!), we played for a while - still softly raining - and then I urged him to go to his master. The man did not stopped to excuse, to call the dog, but everything was in vain. He explained me that the dog is very curious, then he explained to the dog that it is not allowed to jump on people on the streets!!! :-)
So, after about three-four minutes he decided to put the leash .... :-( 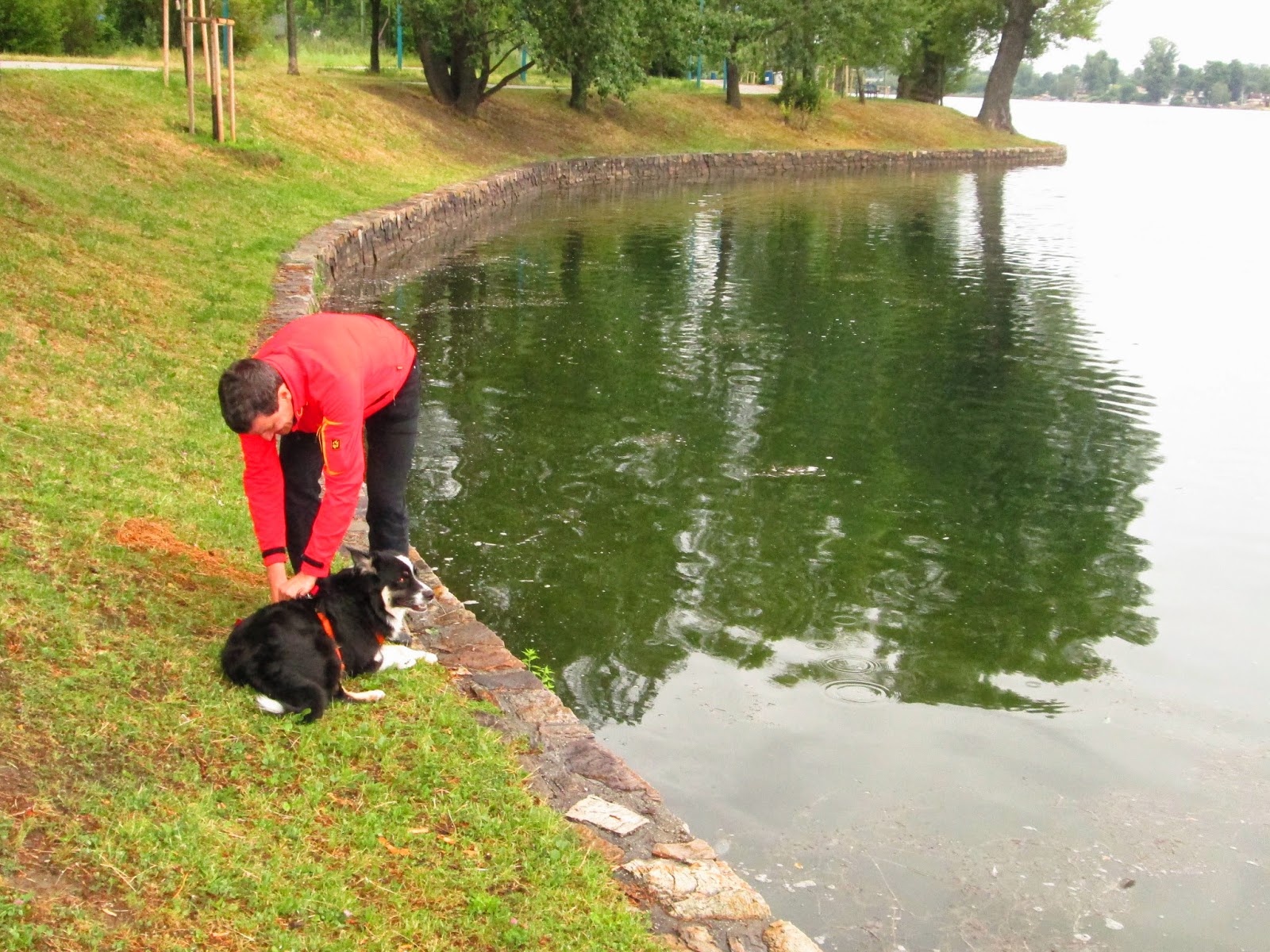 and I decided it was the time to ride home again, in my special suit :-), but not before to release the aquatic creepers hanging all over me :-)
If this is not an adventure ..... 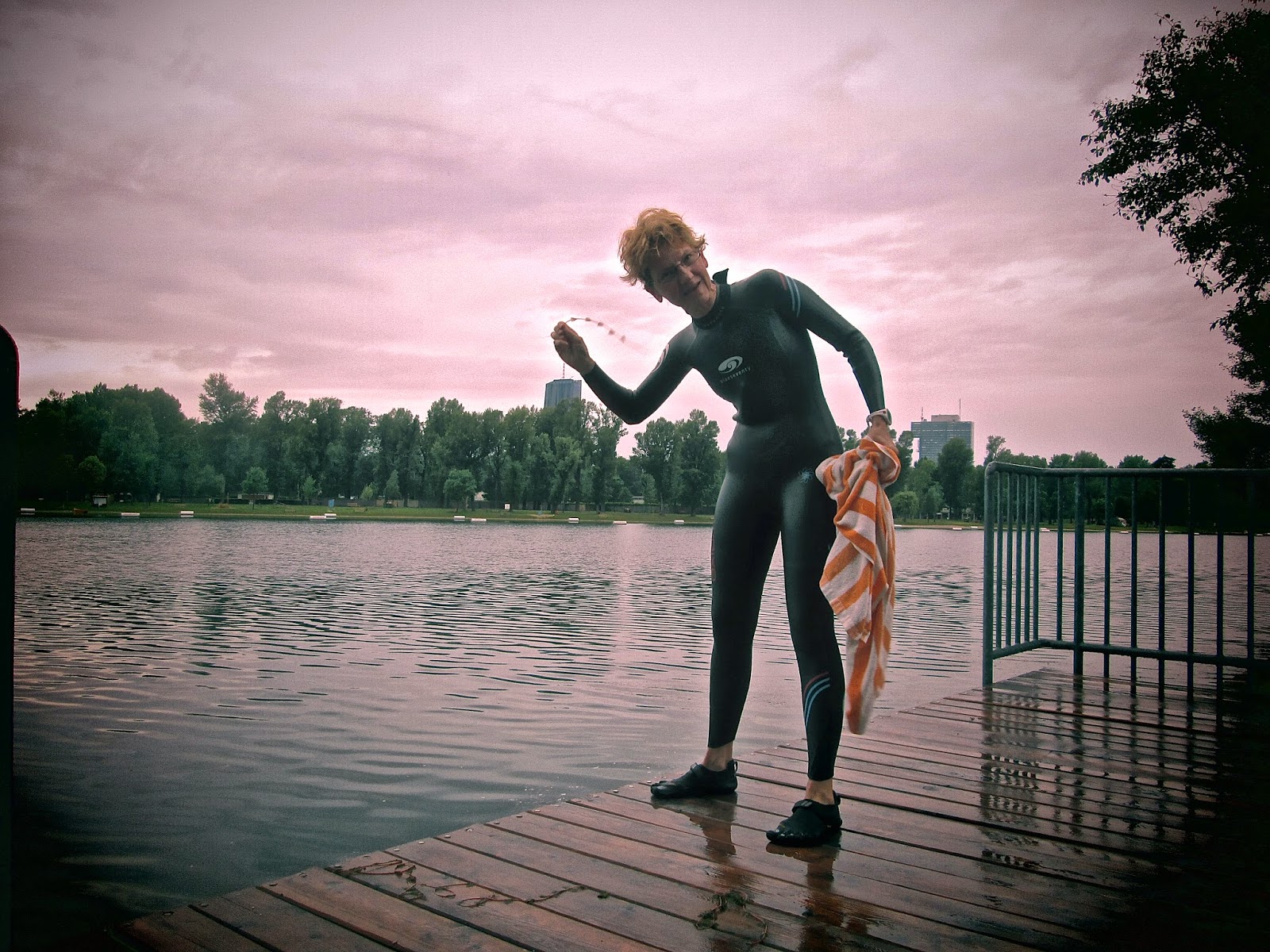 I hope to do it again ... as I did it last Sunday evening, as the rain storm started .... that was crazy indeed! 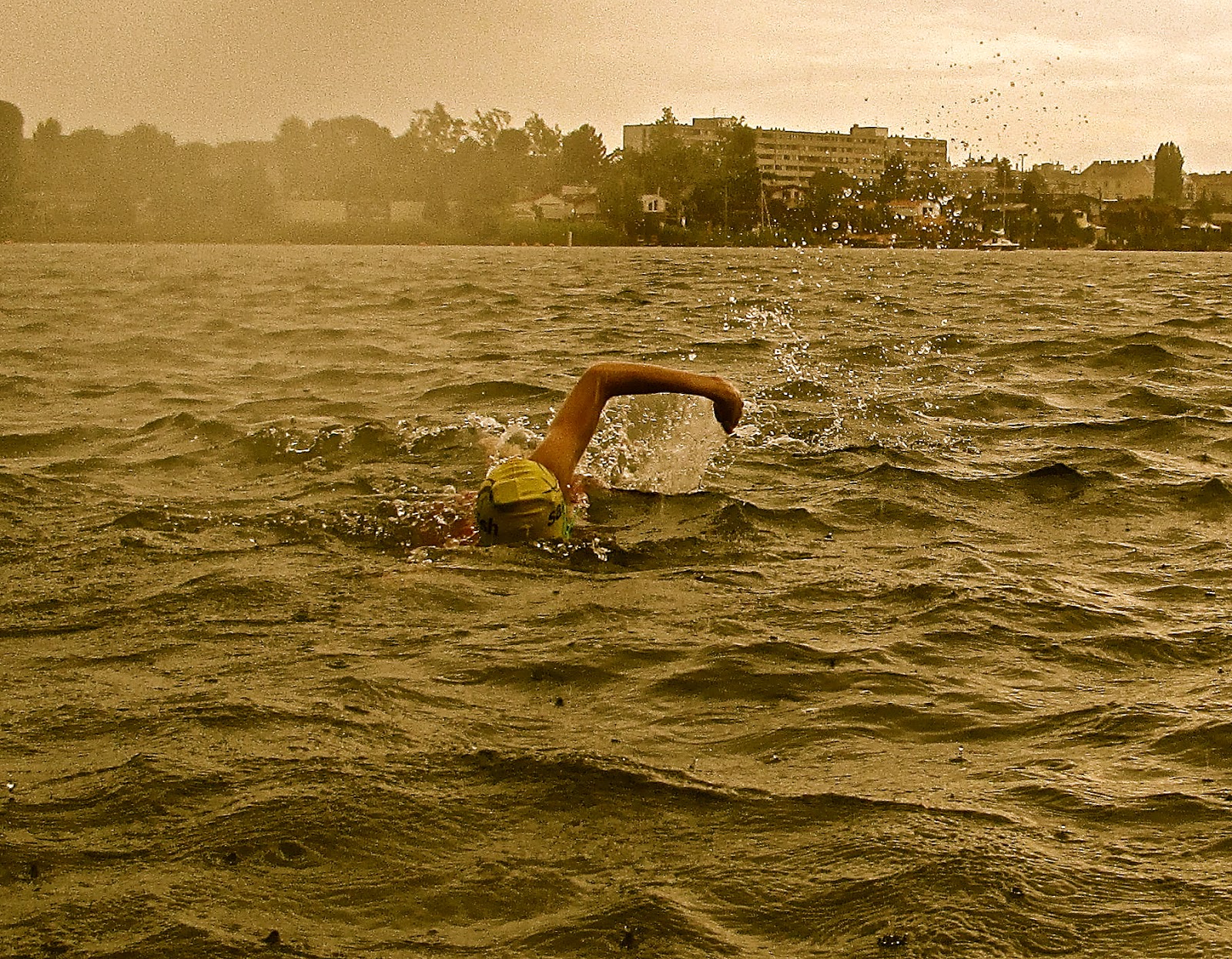