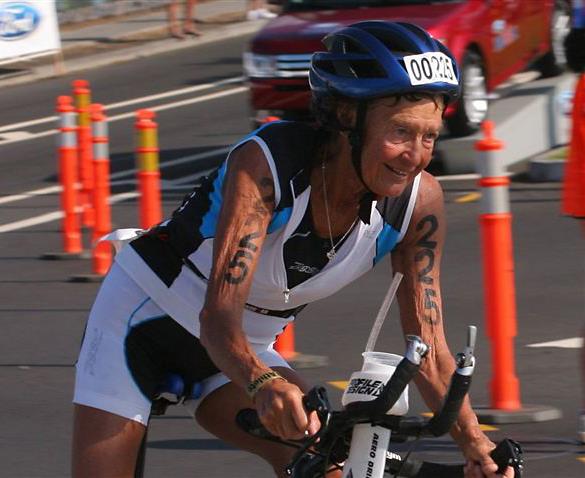 She does it again! How special and inspiring it was in Penticton for the 30th and final Ironman Canada race to have a new world record set by the one and only Sister Madonna Buder aka the "Iron Nun". A great inspiration to those young and old...
At the 2012 Ironman Canada event, Buder became the oldest woman to ever finish an Ironman race when she crossed the finish line at 16:32:00. At the age of 82 she sets a new world record on the women's side. She might even be the world recorder holder for the oldest person in general to finish the grueling 140.6 mile race as it seems Lew Hollander has the oldest man to finish and Ironman at 81.

Her splits for the day consisted of a 1 hour - 36 minutes and 9 second Swim (2.4 miles), a 7 hour - 54 minutes and 15 second Bike (112 miles) which converts to roughly an average speed of 13.10 mph on the hilly bike course. She ends her night with a 6 hour - 41 minutes and 21 second Run (26.2 miles) for and overall time of 16:32:00.
Sister Madonna Buder also known as the "Iron Nun" is a Roman Catholic nun from Spokane, Washington. She started running at the age of 48 and competed in her first Ironman when she was 55. She has completed over 330 triathlons including countless Ironman and Ironman 70.3 events (30+). In 2005 at the Ironman World Championship race at age 75, she became the oldest woman ever to complete the race, finishing 1 hour before the 17-hour midnight cut-off time. In 2006 in Kona at age 76, she again became the oldest woman ever to complete the race, this time barely finishing under the 17 hour mark with a time 16:59:03.
In 2008, Sister Madonna participated in the Ironman Canada race held in Penticton, British Columbia. All day and at the end spectators cheered and encouraged her but this time she was unable to finish the race under the 17 hour cut-off, finishing in a time of 17:02:47.
In the Ironman community, a failure like that is painful but triggers that knee jerk reaction to try again and conquer the course another day. Fast forward a year... On August 30, 2009, Sister Madonna was back in Penticton and this time successfully completed Ironman Canada in a time of 16:54:30. The accomplishment broke her own record of being the oldest female to complete in an Ironman triathlon at the age of 79. At the time, Sister Madonna said that she would be back next year to be the first 80 year old woman to finish an Ironman.
In 2010, at the age of 80, Buder again was trying to challenge her self and set a new record but didn't get to complete her race in Penticton at Ironman Canada due to some wetsuit issues which might have contributed to not making the bike cut-off.
Iron Nun Sister Madonna Buder's Book, The Grace to Race 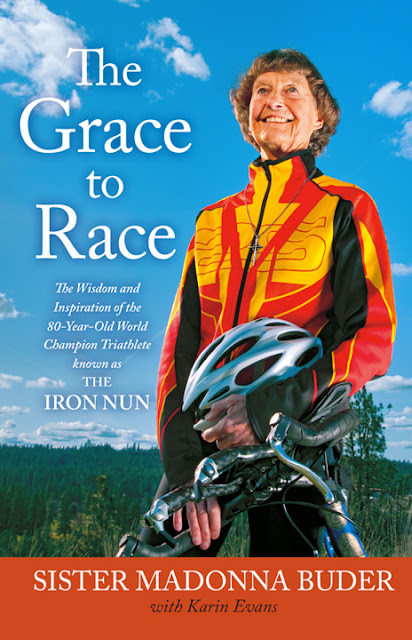 Some people slow down as they get older, especially when they hit their 70's, but here is a woman that hasn't slowed down one bit and shows us that life goes on even when you're 80. At the 2011 running of the Boston Marathon, Sister Madonna Buder graced those other athletes running with her presence and ability. At the age of 80, she set out to conquer the course and establish a new age group for women.

"I don't know if there's been an 80-year-old woman to run Boston. When I last ran Boston in 2008, there were several men in their 80s, but no women." The woman who started running late in life and has conquered several grueling Ironman triathlons in her career finishes her day at the Boston Marathon in 5:01:05.
Her accomplishments in running and triathlon have inspired many people who have seen her in person or have read her story to try things and achieve new heights in doing so. Now she has another way to inspire others with the new book she published late last year, The Grace to Race: The Wisdom and Inspiration of the 80-Year-Old World Champion Triathlete Known as the Iron Nun.
Sister Madonna Buder is 80 years old, has run more than 340 triathlons, and doesn't know what all the fuss is about. In The Grace to Race, she shares the no-nonsense spirit and deep faith that inspired her extraordinary journey from a prominent St. Louis family to a Catholic Convent and finally to championship finish lines all over the world.
As a beautiful young woman, she became an elegant equestrian and accomplished amateur actress. But as she describes in this intimate memoir, she had a secret plan as early as 14: she wanted to devote her life to God. After being courted by the most eligible bachelors in her hometown, she chose a different path and became a Sister of the Good Shepherd.
She lived a mostly cloistered life as a Nun until her late forties, when a Priest suggested she take a run on the beach. She dug up a pair of shorts in a pile of donated clothes, found a pair of second-hand tennis shoes, and had a second epiphany. This time, she discovered the spiritual joy of pushing her body to the limit and of seeing God's natural world in all its splendor.

More than thirty years later, she is known as the Iron Nun for all the triathlons she has won. Just five years ago, the age 75-79 category was created for her at the Hawaiian Ironman in Kona, where she completed a 2.4-mile swim, a 112-mile bike ride, and a full 26.2-mile marathon in record time. Now she has set her sights on a new goal: inaugurating another new Ironman age group, 80-84, in 2010.
"Sister Madonna proves you can make records, and break them all over again, at any age. Her spirit is without limits." - Dara Torres, Olympic gold medalist and author of Age Is Just a Number
Sister Madonna holds dozens of records, has broken dozens of bones, and tells of dozens of miracles and angels that propelled her to a far-flung race.
"It is my faith that has carried me through life's ups and downs," she writes. "Whenever injured, I wait for the Lord to pick me up again and set me on my feet, confidently reminding Him, 'God, you know, my intent is to keep running toward you."
Source, click here pls