Introduction (long)
OK, this was a crazy week and a crazy Friday before my first flight after four years of no holiday abroad. Tough week, but interesting week ... communication ... a little bit late for me, but still not too late ... The simple fact that I am here, before the gate, waiting for boarding, is a result of my first experiment of testing a new communication .... this meant, by the way, giving up 95% from me. And this is tough. This meant, by the way, giving up to get angry because due to (an idiot!) a huge lack of communication from the other part, I lost about 6 hours going there and back three times in 3 different days. In my old times, maybe just one week before, I would have given up everything and I would have had nothing at the end. "Nothing" means in this specific context, my money. An amount which covers the value of the entire flight ticket! Or the entire value of the accommodation costs for 7 days and 2 dinners on the island! :-) Yes, it is incredible, but I was so all my life. I've got upset and I closed the door behind me without wanting anything more from the other(s). My mother did so and she learned to be so from her distant relatives from Germany. Later in life I've got the same from people in Germany who were closer to me. And then, after several such of experiences, returning to Romania, trying here to get some close feeling from old friends, I saw that they where not prepared in the same way I wanted or I dreamed to be of. So I had to learn to keep distance, no to make close friends, because I wanted to leave  the place anyway and as I cannot endure the separation from too close friends I took this like "a must" in my life. So, this is the "big picture" about me and my connections.
Why am I telling you this?
In case you need to listen, in case you want to understand, in case you find it useful for yourself. 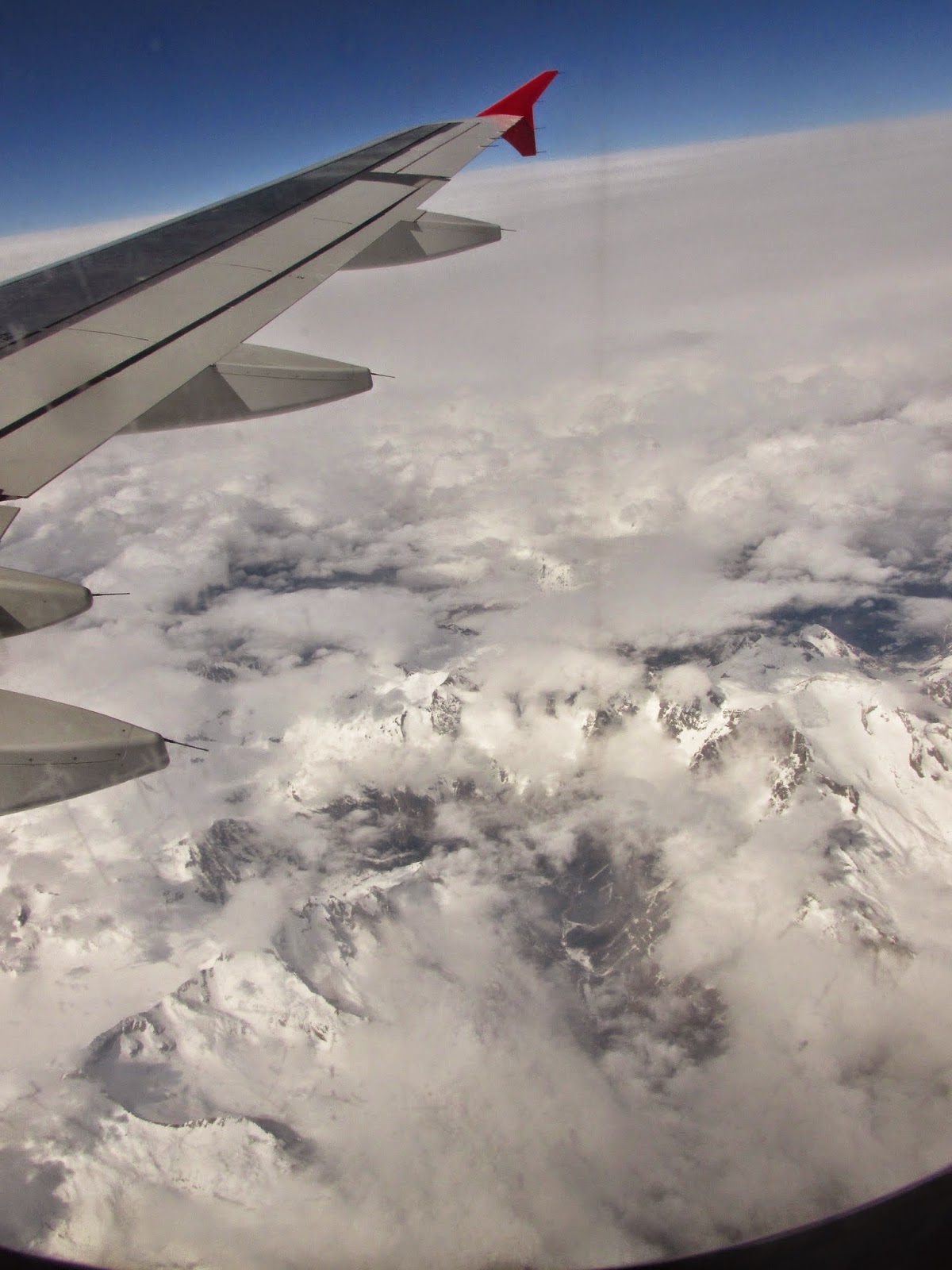 I am in the plane. Place 20F to the window. I choose myself this seat. Unfortunately I have the plane wing in front of any imagine ... so not a good choice from this point of view, but I managed it good, I take good pictures. The seat on my left is free. Strange. Because the plane is full indeed, no other free seat. Story of my life .... On the other seat to the edge there is a young woman. Black hair and a shy figure. I tried to connect to her. "Where do you flight? Lanzarote or Fuerteventura?" Lanzarote. "Oh, like me. First time?" Yes. "Me too. Where part of the island?" She didn't know the name of the place she was going to. I tried later to connect again, but I had no success. I thought she would like to look on the window too, but no. She was all the time mindful about something, a sort of flying thought or hope .... 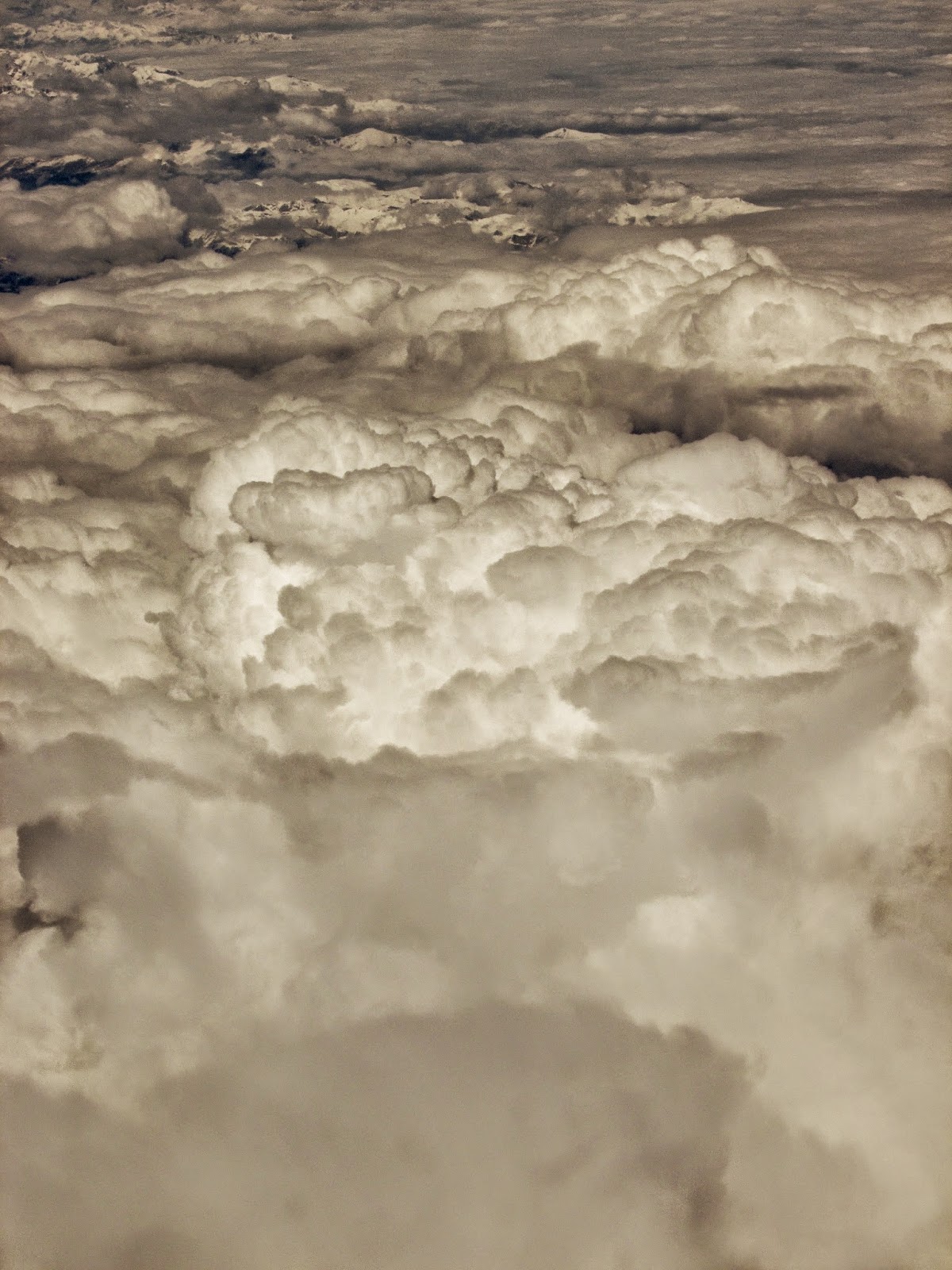 Every time I looked to her she was like a floating ghost ... I cannot say if she belongs to that category of people who are "always very happy"...
Flying with Austrian AirLines for the first time it was a very enjoyable experience. I had to smile inside of me as I heard the instructions and I remarked how the times are changing .... ”Please get out the earphones from your ears as we are going to communicate very important safety rules.”
Yes .... ”the earphones generation” .... in Austria are some discussions in mass-media at this moment. Should the people be punished because they use the mobile phone and are walking, crossing the streets of the cities wearing earphones? Why only the car drivers? Very many accidents are happening because people are speaking on mobile while crossing the streets or because they do not hear alarm signals because are listening something during they participate to the traffic ....
So, going back to my story: 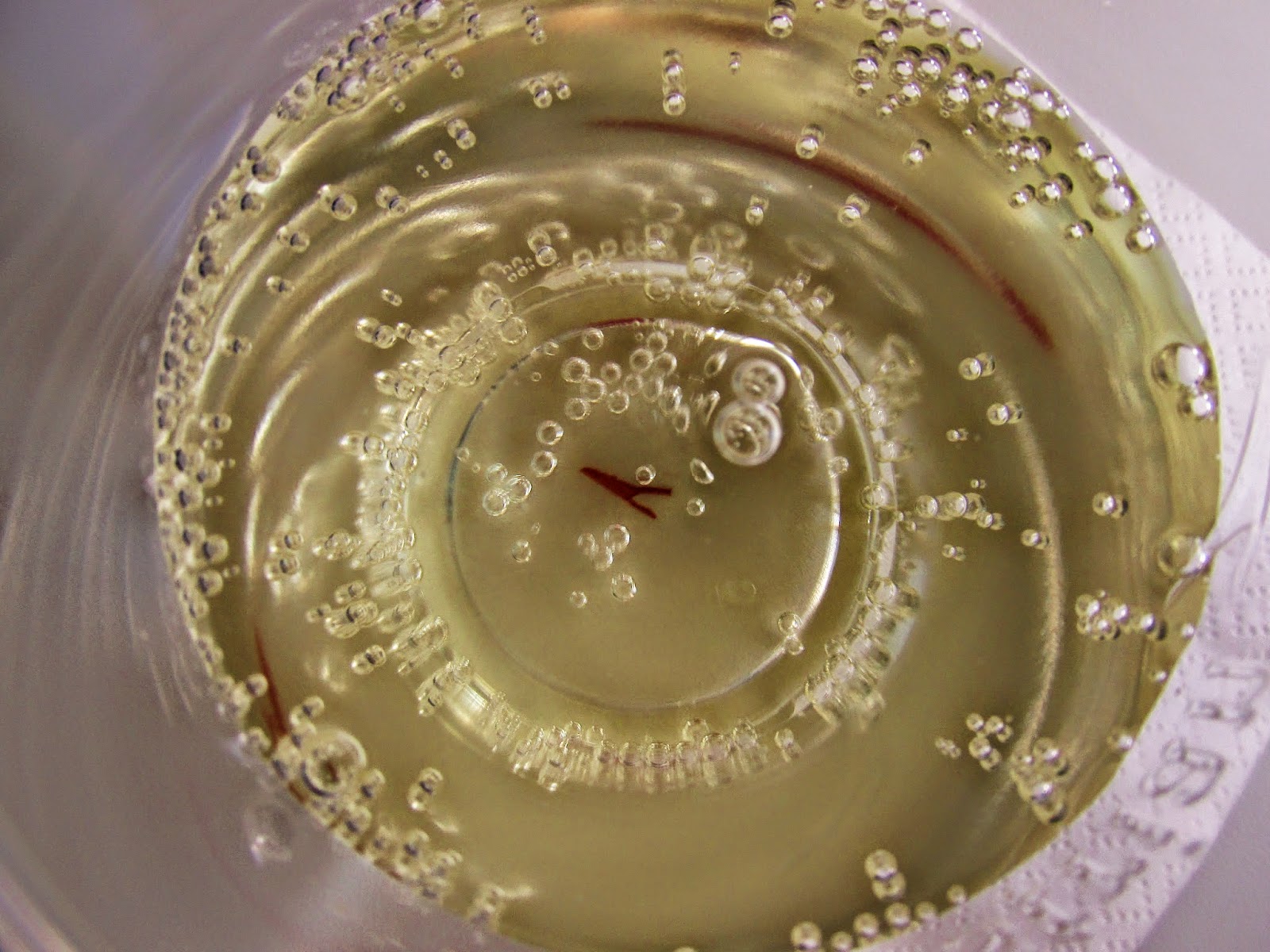 The flight took almost five hours til Lanzarote. Before landing we got a glass of champagne and I enjoyed the idea, I love champagne!
I have read about 50 pages, but I mostly took pictures, as my fascination for clouds never dies.
The book of Martyn Brunt about ”Accidental Ironman” has a sort of humor inside, but after the first pages it becomes boring (for me, of course). I will try to finish it, to exercise my English - a lot of words I don't understand there, being not a literature style language - and to write a summary at the end. 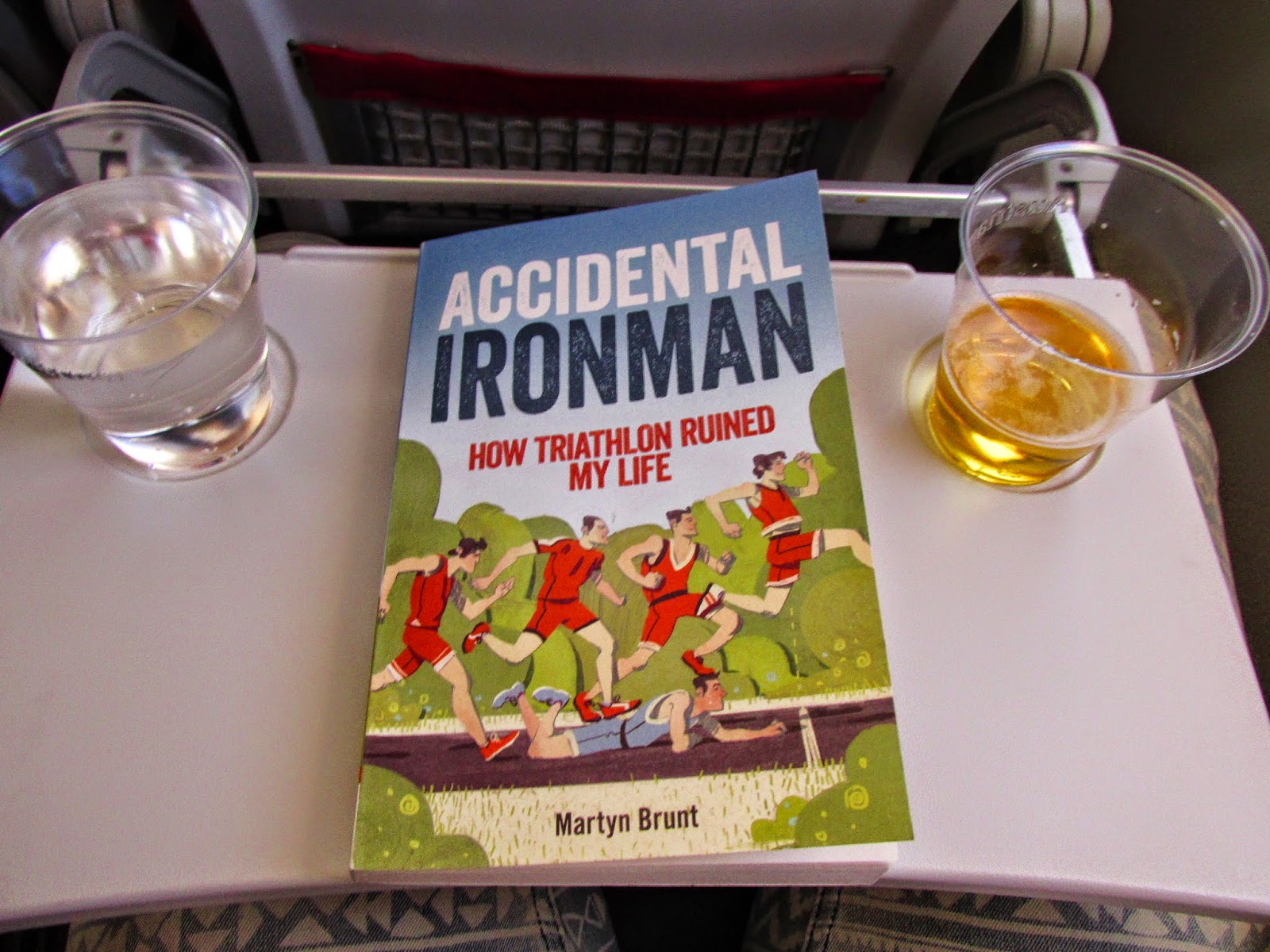 So far, I do not find the title it suits, but it was chosen only from commercial reasons, which by the way I do not find as being a fair play sales strategy (!)
A mention, before going on and trying to be shorter for today: I left Austria and I landed on one of the Canary Islands of Spain and nobody needed to see my identity card ... so much changes in the last four years?! No identity card needed .... hm
First time in Lanzarote
Short, because the story would become much to long:
From the airport, when you go out you go right and you will see the public bus station. At 18:00 came my bus to Puerto del Carmen (161 or 61 bus) and I paid directly to the non-English-speaking driver the large amount of 1,40 euro (!!!) 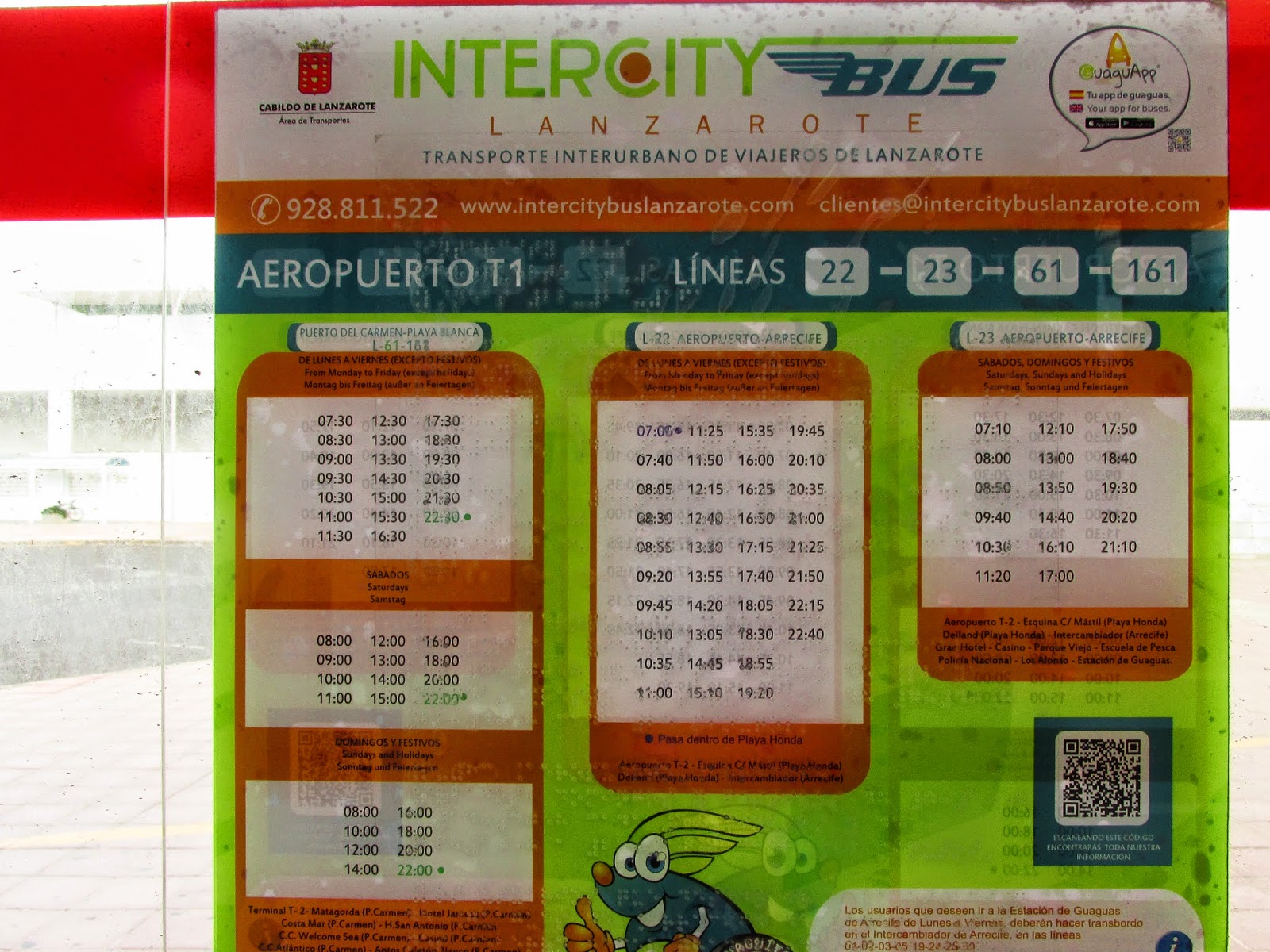 The drive took about half an hour. You have to know where you are going to get down .... and I was total unprepared for this, but I finally managed somehow!!
The luggage have to be stored in the hale.
I looked for my hotel for a while. The bus driver gave me a prospect with the map, so it was not so difficult. But I had 2 backpacks and the bigger photo camera.
Accommodation (details in a future material):
18:45 I reached the apartments complex "Las Terazas" and the guy by the reception knew pretty well English. 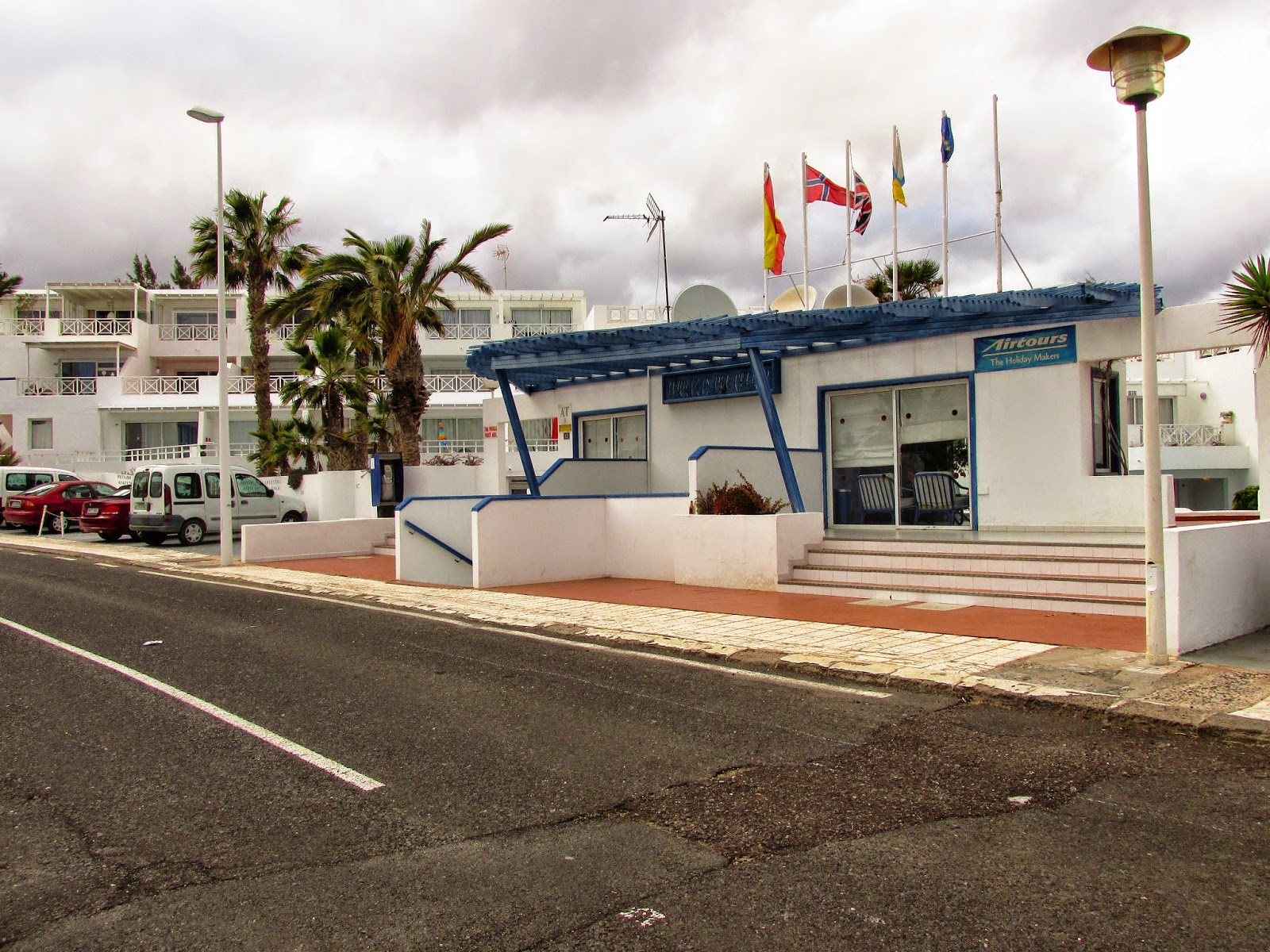 Although I asked for a quiet room, somewhere behind and on the back side, he gave me a room at the ground level close to the pool. Exactly what I pointed out I do not want to get it. I do not understand these games .... I booked 6 months ago, man!!
I took the key and I asked if it is not possible to have a quiet room, somewhere back side after all. And yes, it was possible. Is this just a game in order to show what big personal service he is doing for me?! My intelligence is insulted in this way ... 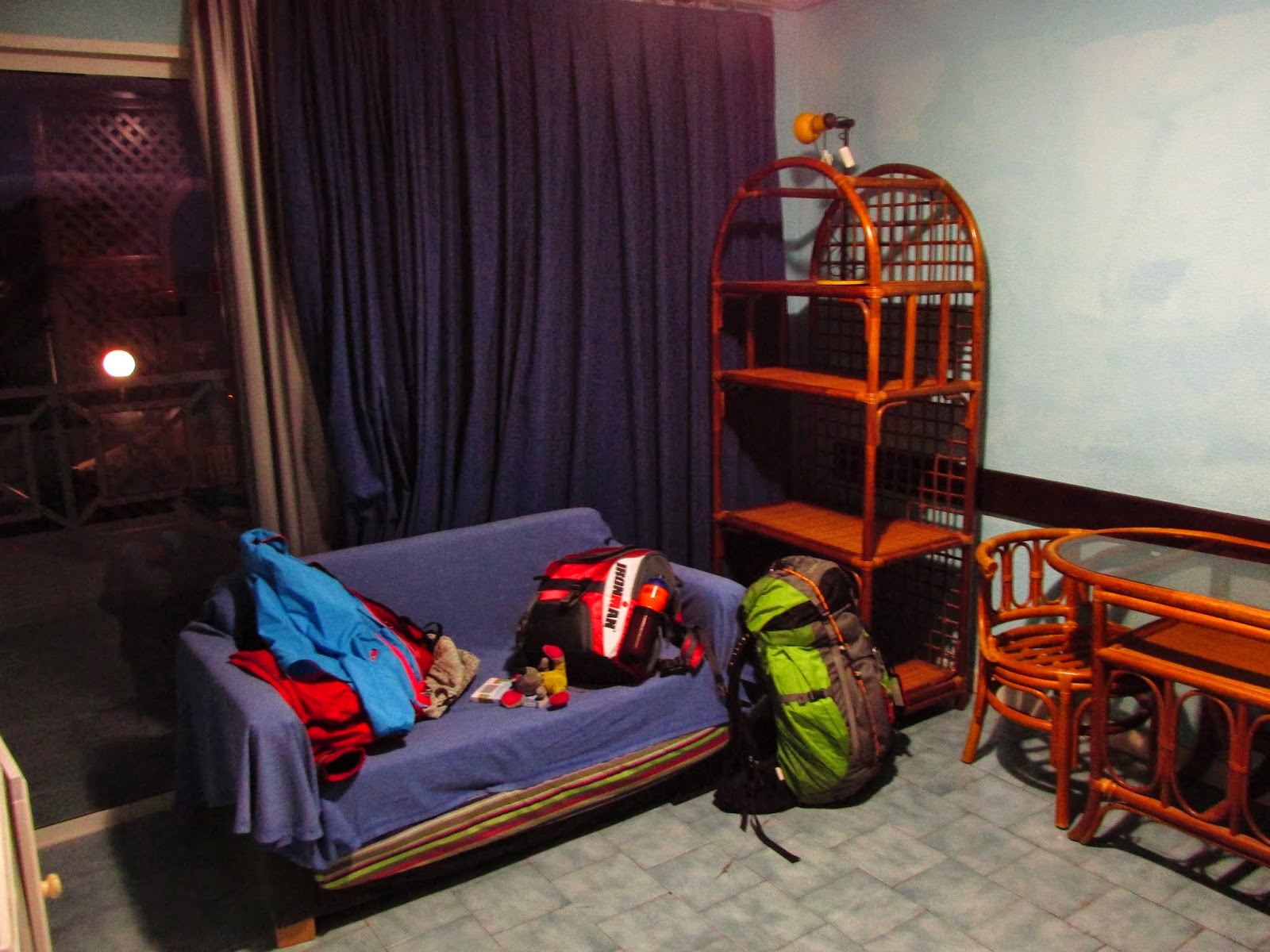 OK, I let the luggage in the room and I went outside to see, to discover ... it was 7 p.m. and the reception closed ....
First activities, first pictures about the amazing lava island of Lanzarote:
I was outside running, walking and taking pictures for about two hours.
I also succeed to hurt me .... terrible painful and the running long treasures ripped out on knee area :-( 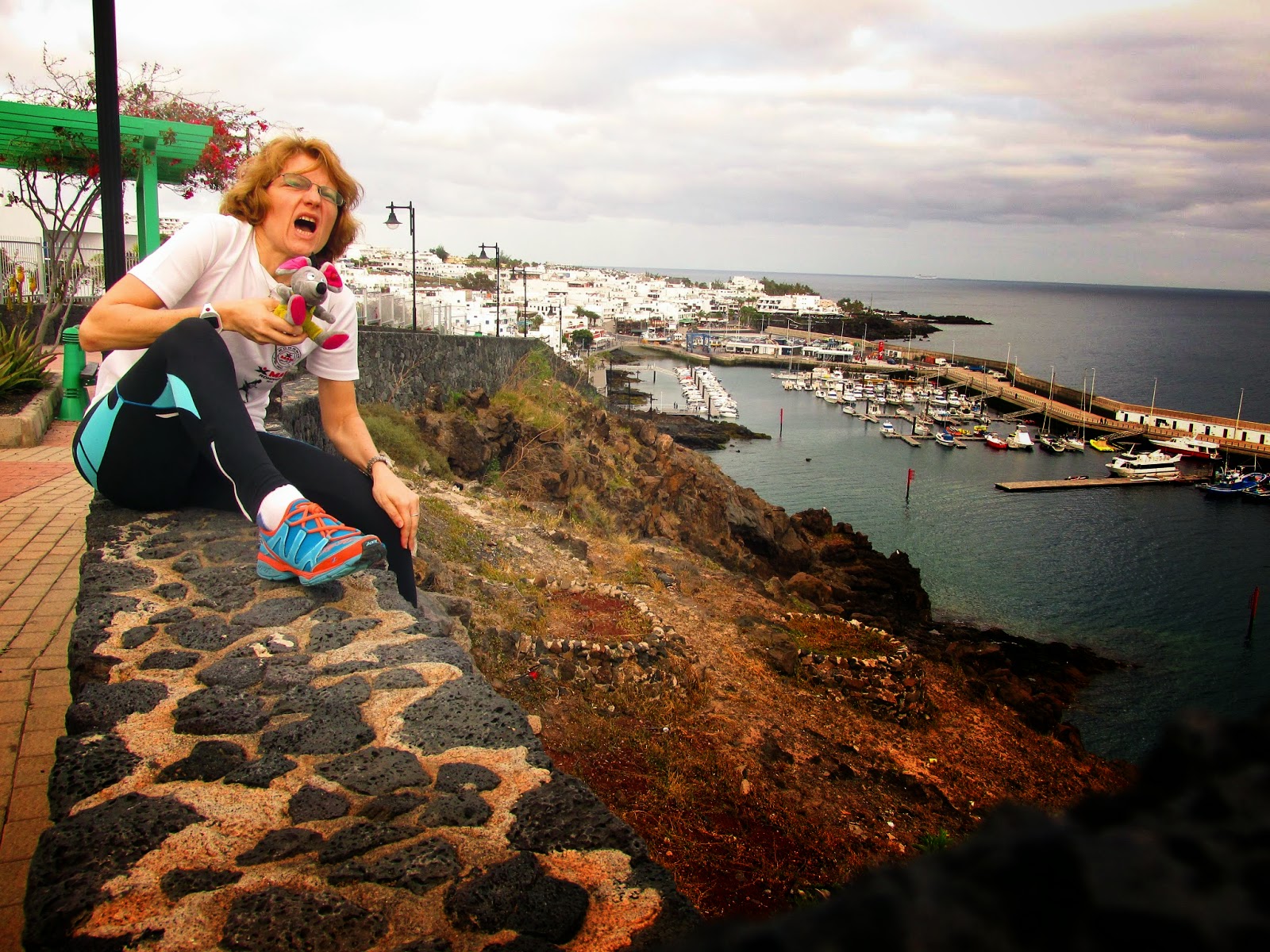 I returned on full darkness to the hotel. I saw terrible many cats. Hungry cats. Homeless cats. Sick cats. Not happy cats .... aristocrats cats among them. This is why I name this island The Cats' Island ! 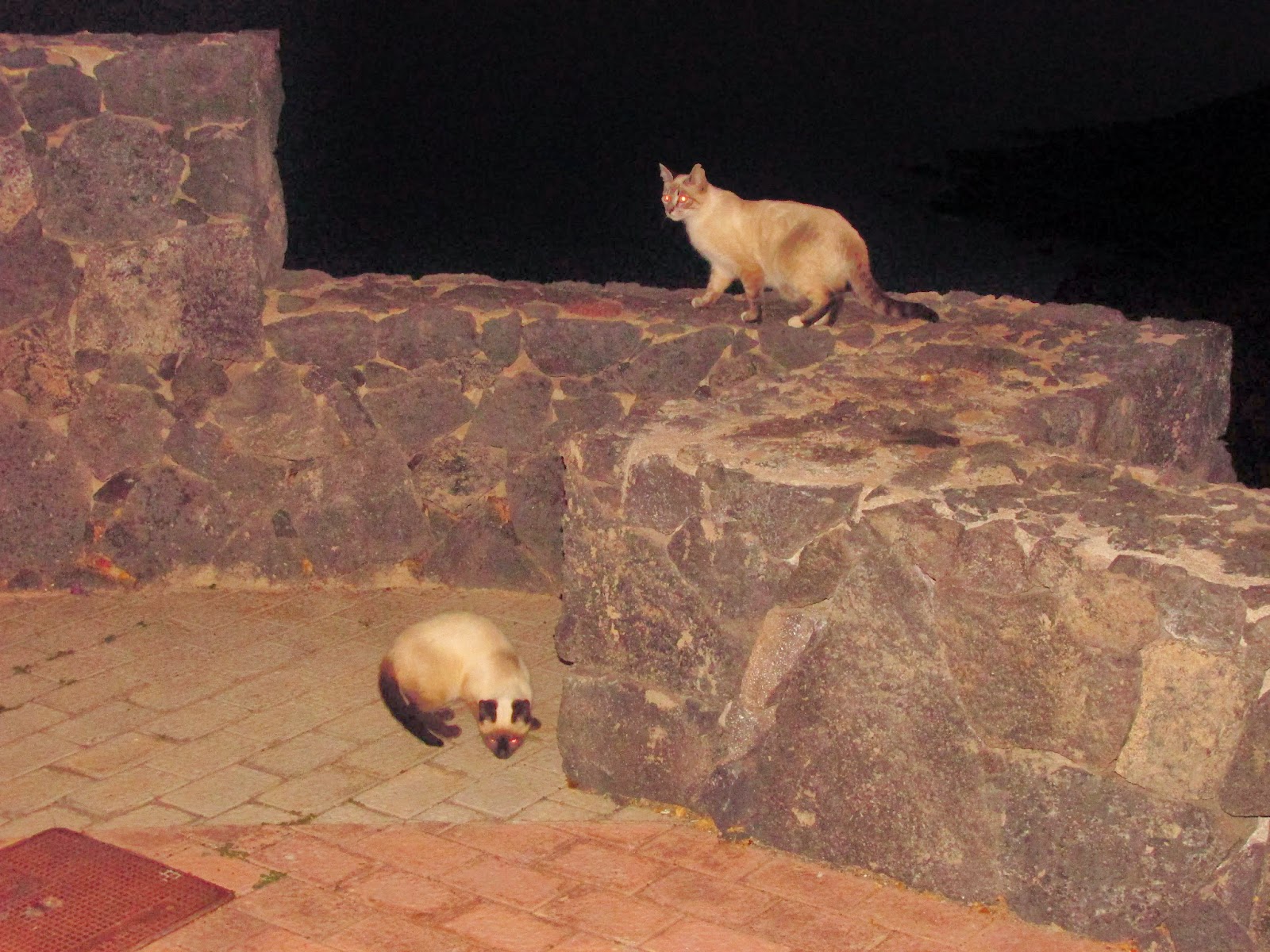 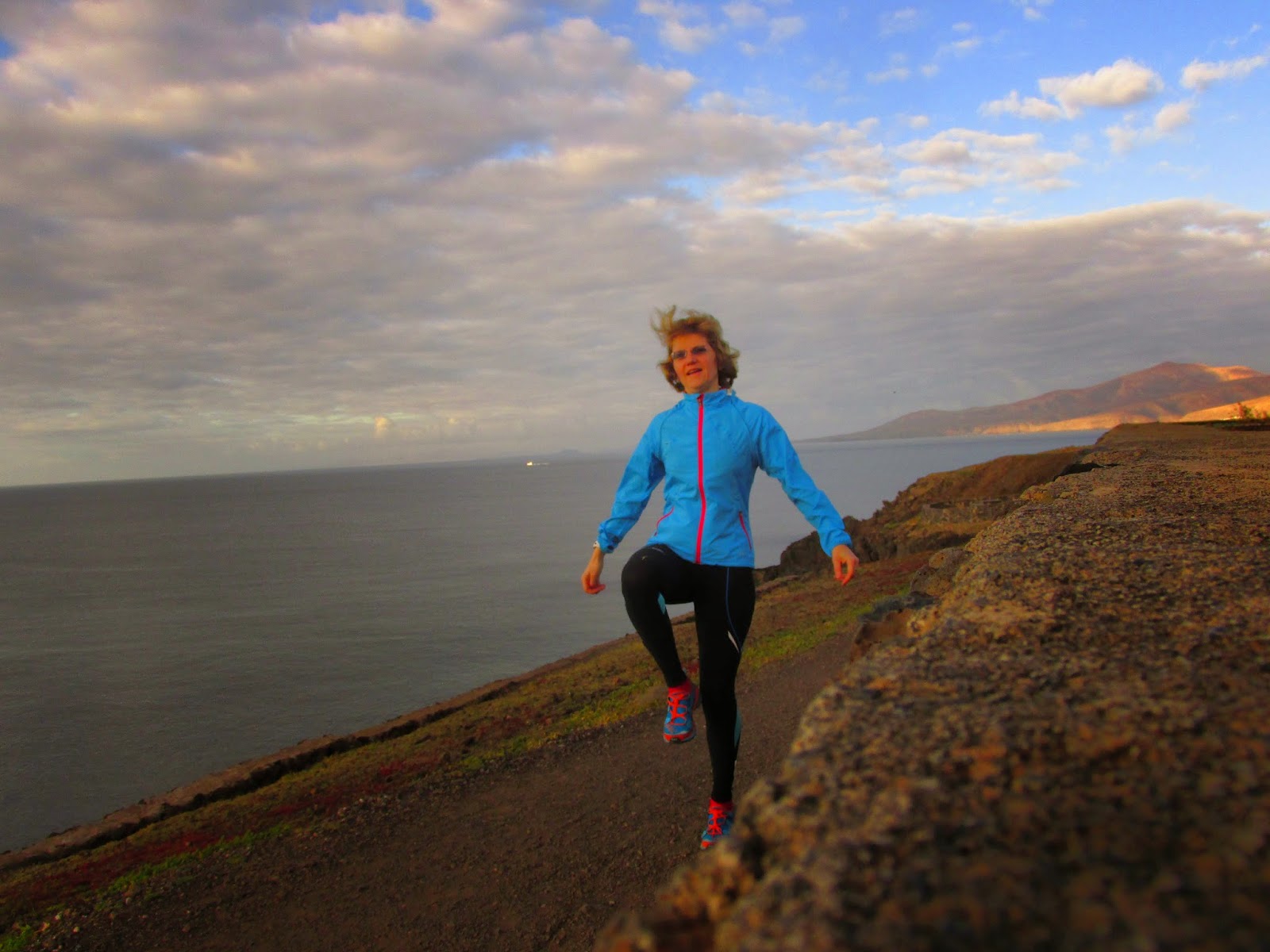 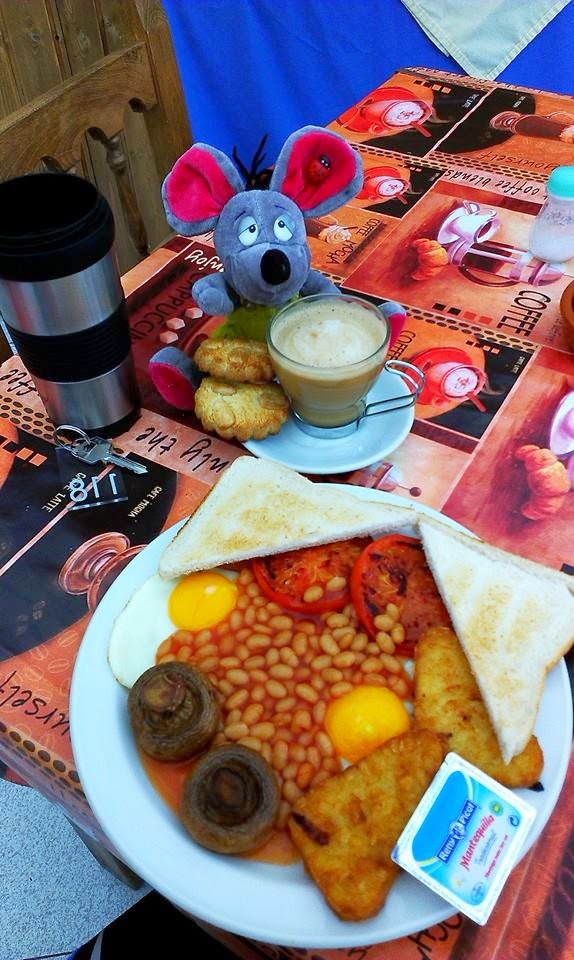 Going to pick up my reserved road bike.
Closed doors.
Found another shop, open. They had only 3 mountain bikes available.
3 days = 22,50 euro. 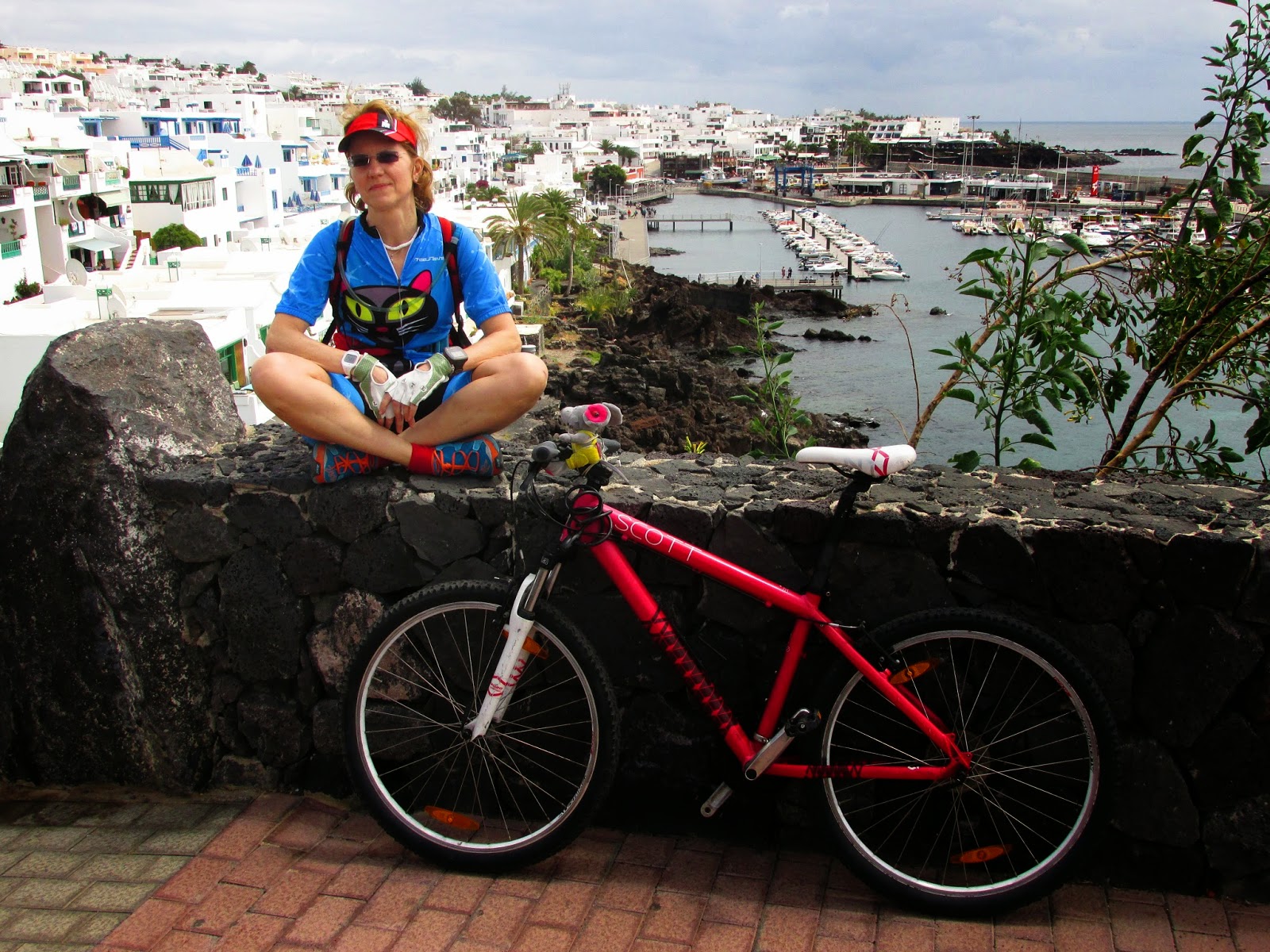 Puerto del Carmen along the coast until Puerto Calero. Off road mostly. 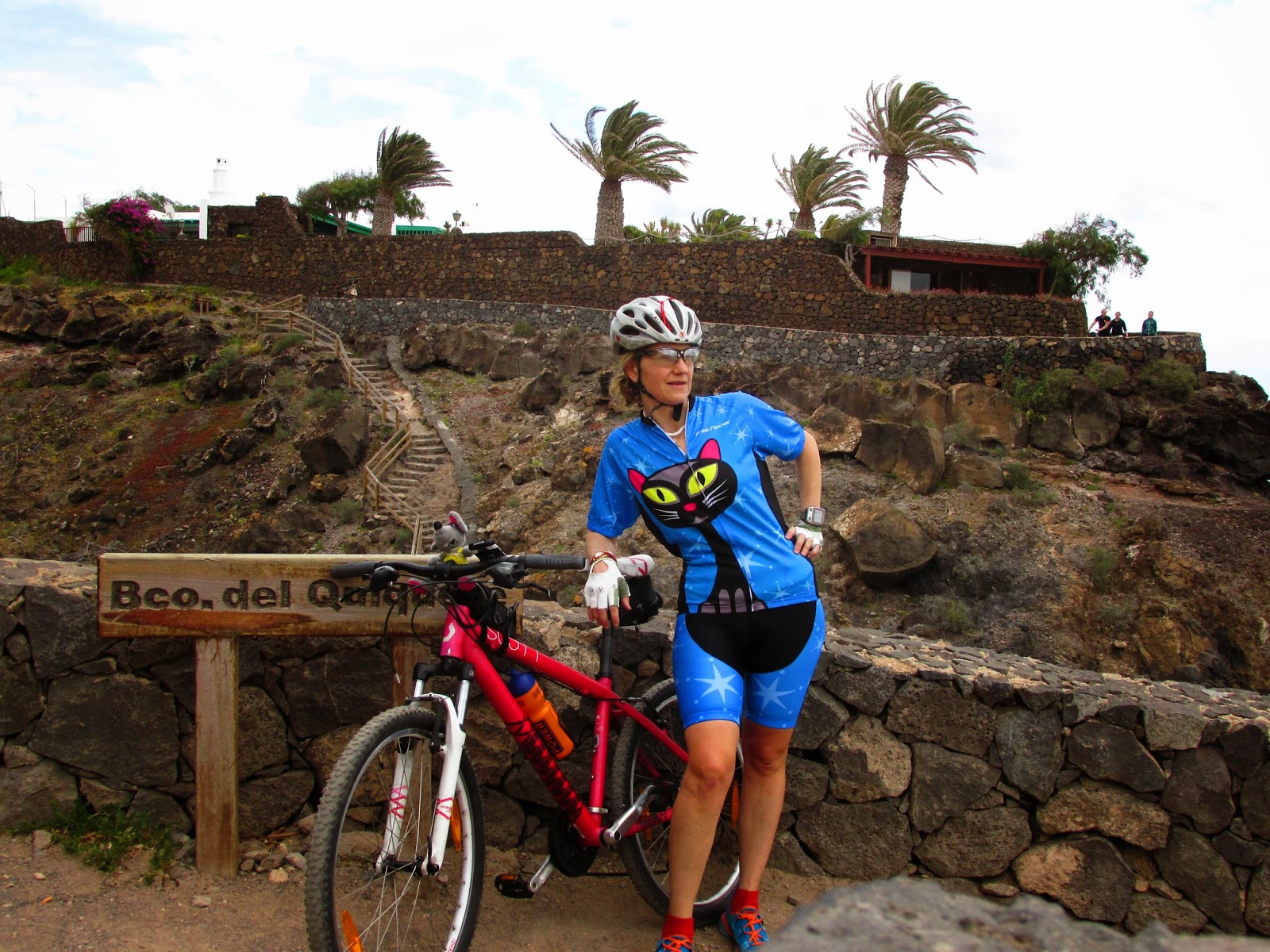 Then on the road straight away to La Asamada. Terrible, terrible windy, man!! These islands are windy! 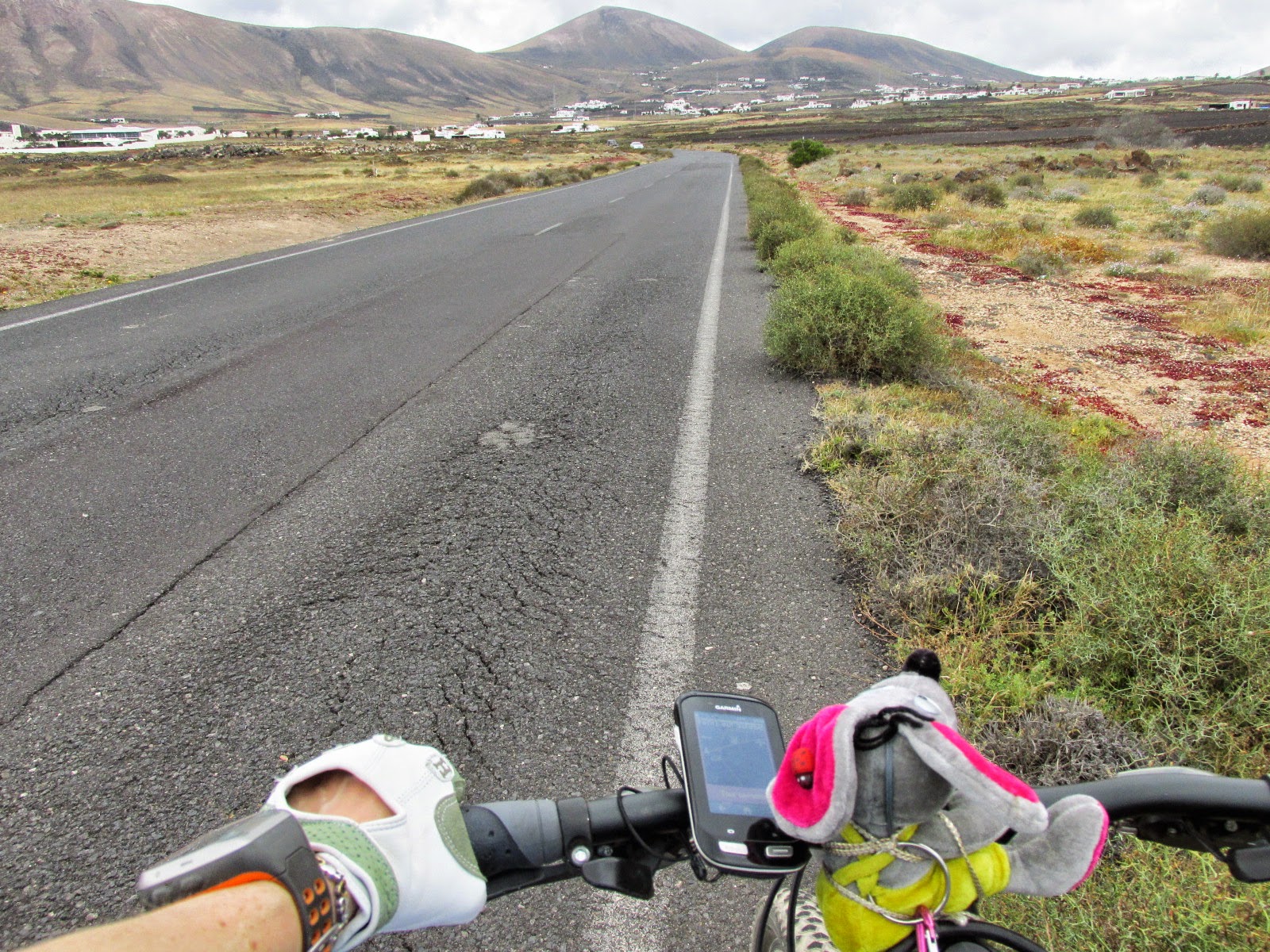 I reached Conil and I returned on a different way, looking to reach the coast actually. 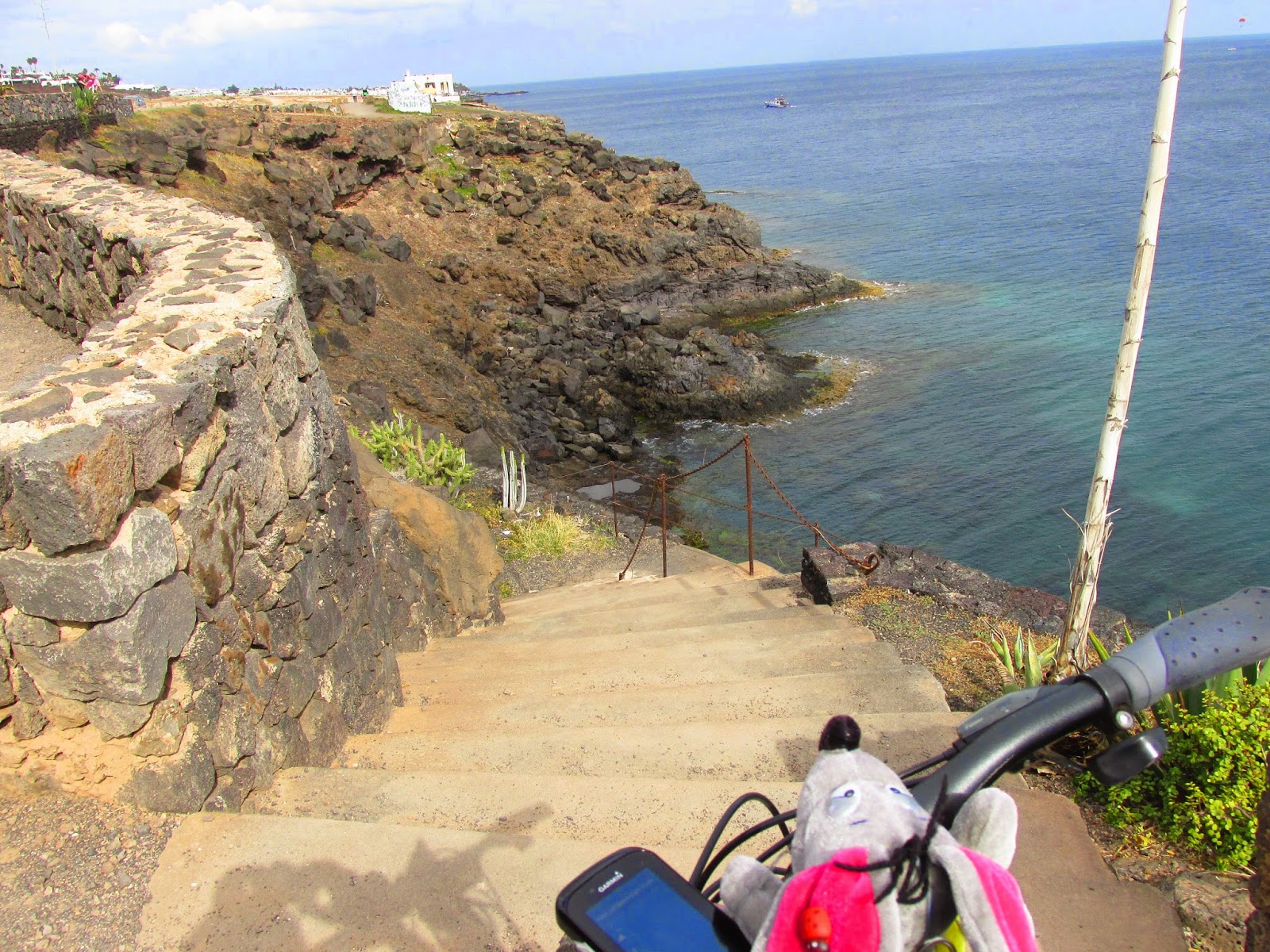 The description of the day in a future material, just follow me :-)
Good night (already Monday, it is 00:40 and I need my sleep. Outside is very windy, balcony glass door is moving from time to time, pretty chilly actually. I would go out, but I am really very tired).