Finding °that° exceptional and only one in life feeling .... (1)

Short notice of the day 4th on Lanzarote Island:

I have to start with the pictures of the day, they are three + 2, summarizing the essential of this day which I will never forget in my life:


After 3 full days on this Island, only since yesterday I've got the feeling the amazing is starting. I am not "in the rush"-type. I need 1-2 days to look around, to smell, to touch ... then I can go further.
Yes, yesterday was a great day too, but not so great like today. The idea to change the place it was fantastic! One week in Puerto del Carmen in that 2* apartments complex would have not been to nice, but being without money, it was a good solution. I don't think you find in Puerto del Carmen accommodation with breakfast for 28 euros. And it is close to the airport too, direct bus. When you are traveling alone in a complete new place, you are a woman and have more than one piece of luggage, the best idea is to measure the risks, distances, costs and see what you can do and what you cannot do.
So, I woke up at 7:30 a.m., after only 6 hours of agitated sleep. I started to pack my backpacks, I ate a rest of noodles from yesterday evening, I took the rented bike and cycled to the center of Puerto del Carmen, in order to return it. I got lost, so I cycled around for about 1-2 km longer, I returned the bike and I run back to the hotel. It was 9:30 already. On the way I tried to find the bus station, but the information was so terrible confused .... no bus was for Arrecife Estacion as I was told by the reception guy .... terrible confusions here about the information you get, the bus drivers do not speak English .... I never watched telenovelas, so my learned Spanish is gone and lost .... I saw a mature, serious taxi driver, I said "Hola" and asked him how much would cost me to be driven to Tinajo, 20 km away from Puerto del Carmen, to the other side of the island. He said about 23 euros .... 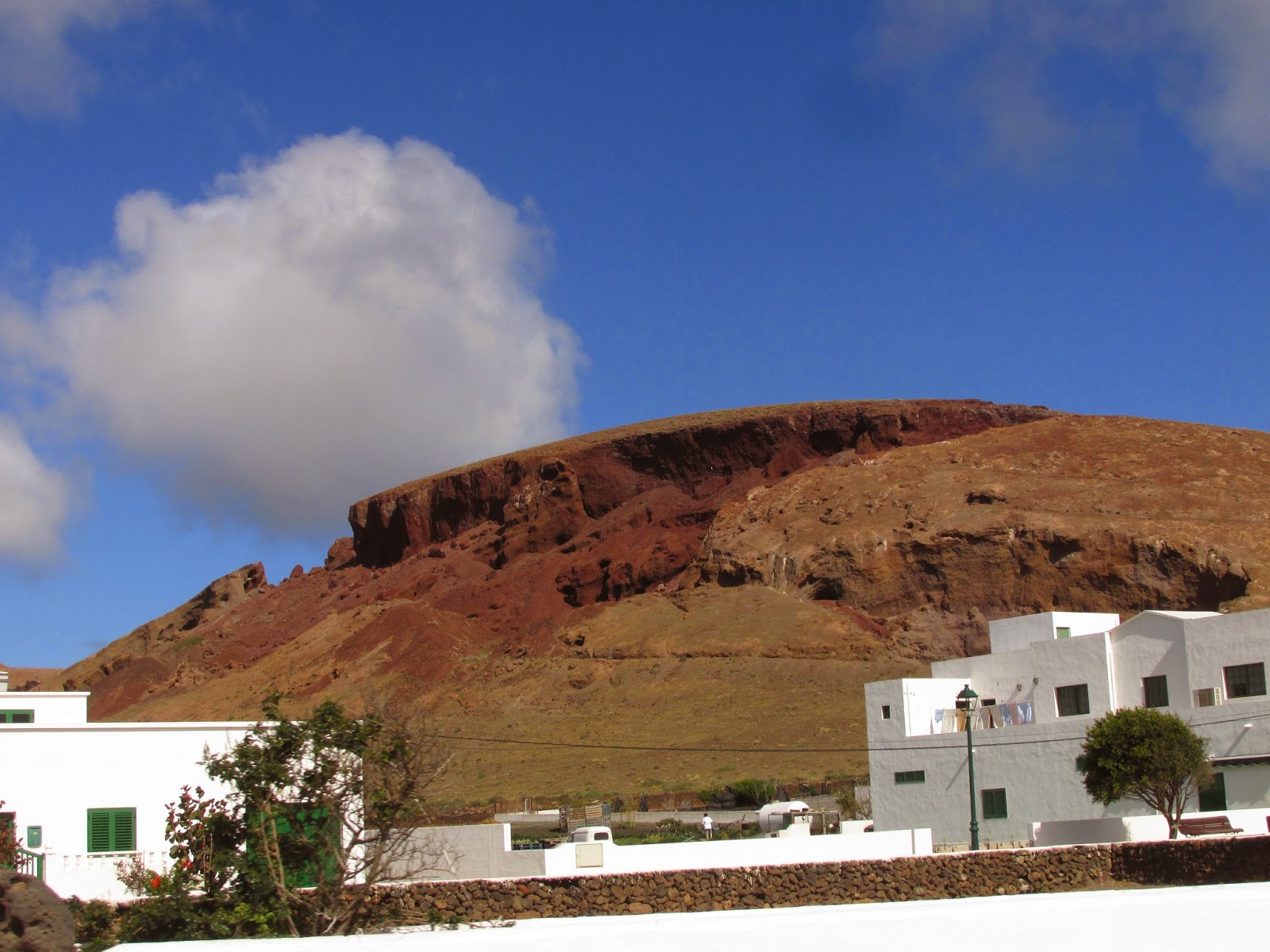 By buses would have cost me probably 5 euros per total, but it would also cost me about 3 hours and a lot of stress because of the luggage, because the backpack are heavy (13 + 8 kg + a bigger photo camera of about 1,5 kg), because the bus is crowded and late. And I was told I have to take the bus to Arrecife, then change with a bus to Tinajo. But I also was told in Arrecife there is a single bus station (!!!), named Estacion ... and on the list was no bus stacion that name, but several bus stations in Arrecife ..... so .... WTF?!
I decided to take a taxi, for the first time in my life while traveling .... ok, I will skip the lunch and the dinner, it would not be for the first time. In Puerto del Carmen I spent only 40 euro for food in 3 days and not because the prices are like in Thailand or Nepal .... just because so I always understood to travel low budget, when not possible to be mid or high budget :-) Anyway it seems I eat more air while traveling, because I am too excited.
The man said his friend will drive me, another taxi driver. We agreed to meet in front of the hotel in one hour sharp.
I had my breakfast - omelet with cheese and a coffee, I could eat only 3/4 of my omelet -, I thanked to the nice British couple which owns the bar&restaurant, I noted their names to keep in touch, then I checked-out and thanked to Mario too, the man from the reception. I also bought two wonderful post cards, 20 euro cents each.
10:25 the taxi was in front of the hotel and I was amazed. I said to the man please no rush, drive slowly.
He understood and the half an hour was very pleasant, no hectic.
Due to the electronically tool the cost was 23 euros. I let him 28 (although it was an unexpected cost for me), he was happy, I was happy and .... sometimes money is the change for a piece of small happiness, we cannot change this (!)
Finca Marisa
seemd to be closed. 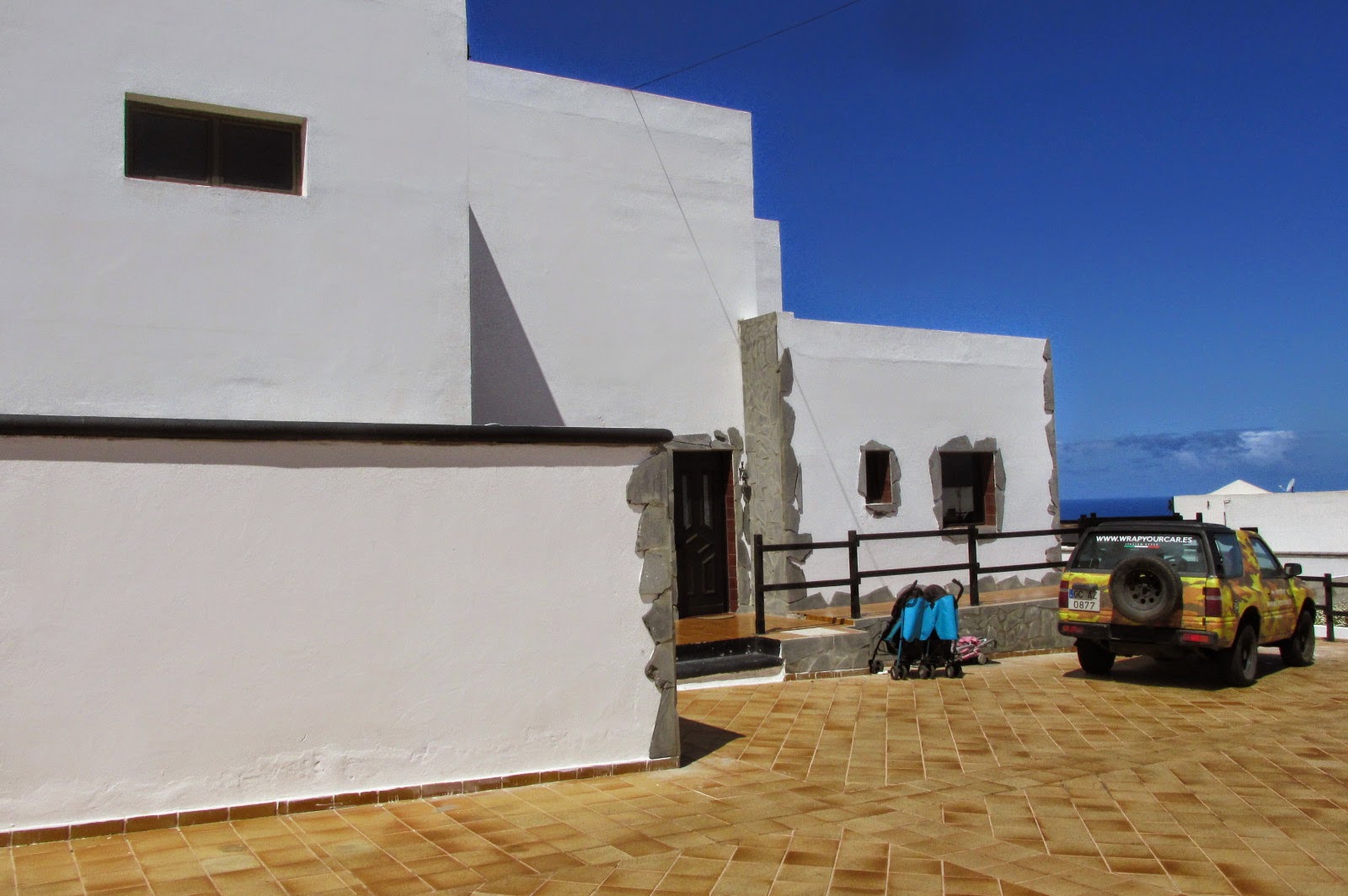 A jeep dirty car was on the yard, but the door was locked. Hm ...
I heard some noise from the inside ....
I went out on the street again to check again if I am in the right spot .... maybe I booked on another island, in another place, another Finca .... 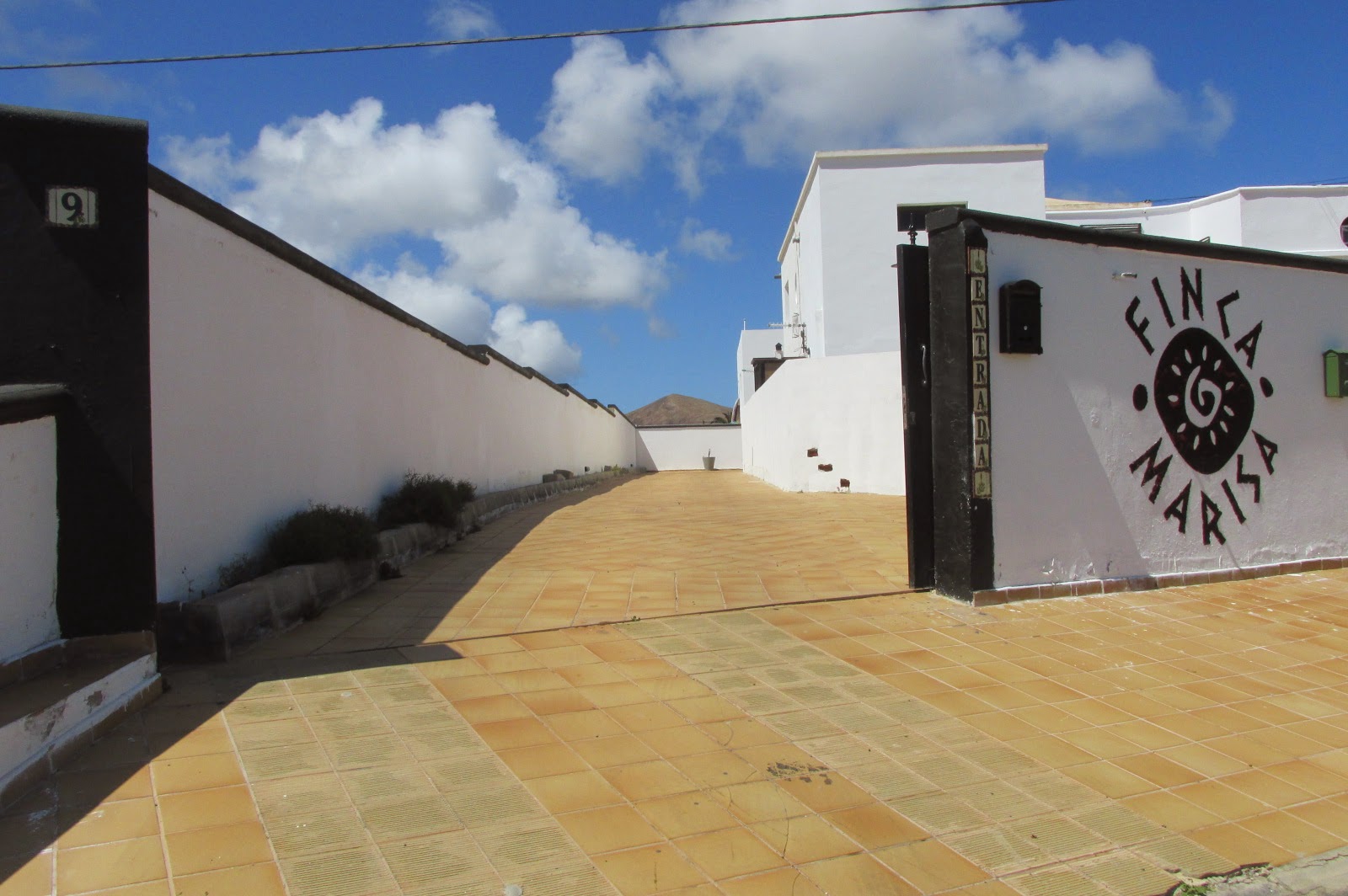 I went back and I knocked louder and more continuously and somebody came to the door, unlocked it and .... a young, merry face of a nice lady who was in the middle of her work cleaning the house opened the door for me. At that moment I felt terrible well and familiar. A nice feeling. She speaks some English. I said to her that I came earlier, it was 11:15 and the check-in time was 14:00, but if it would be possible to let the luggage in a corner I will be perfect to wait until 2 p.m.
She said: No need. You can go to your room. You are the single tourist here and the room is ready for you.
Really?! This is niceeeee .... the only tourist?! In such a big house .... excellent!!
My room was exactly the room I booked, I recognized from the pictures. When you use booking.com you see the pictures of the room type you book, you know?
Et voila:
I was thrilled indeed ... this orange color and the rustic flair and the space and mirrors and stone and wood and a fantastic view into volcanic dessert ....  and the silence I was looking for!! 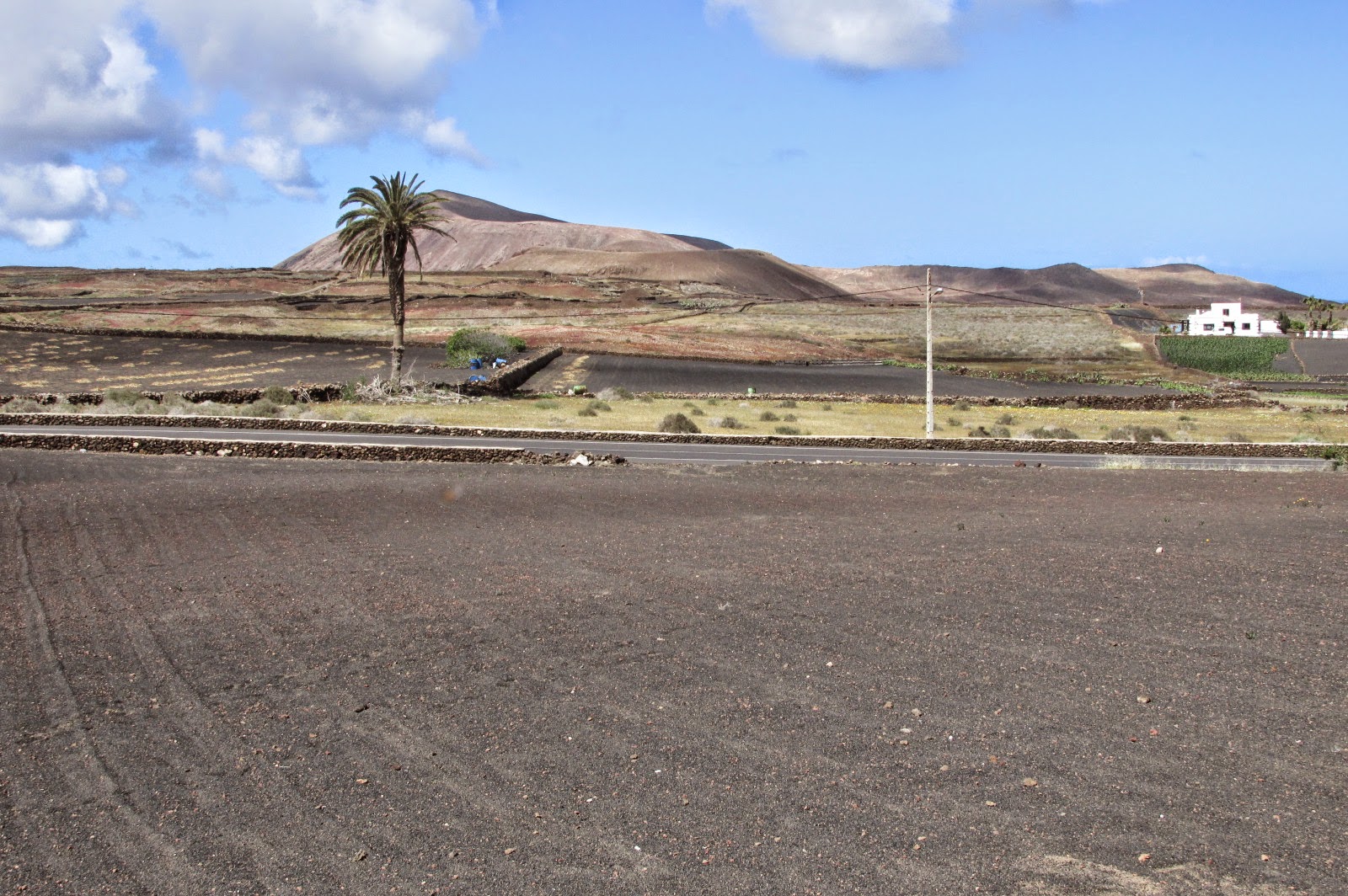 I told the lady I need to go to La Santa to rent a bike .... or maybe does she know a renting shop in Tinajo?
She said, no, Club la Santa is the only one renting bikes in the area and she can drive me there, about 6 km away to the Atlantic Coast. It would be another possibility, she call a bike store in Puerto del Carmen and they bring a bike for me here, charging 10 euro extra for the transportation. Shit, I was coming from Puerto del Carmen!! I did not take the bike with me because from Tinajo I do not go to Puerto del Carmen again, but to Arrecife directly. 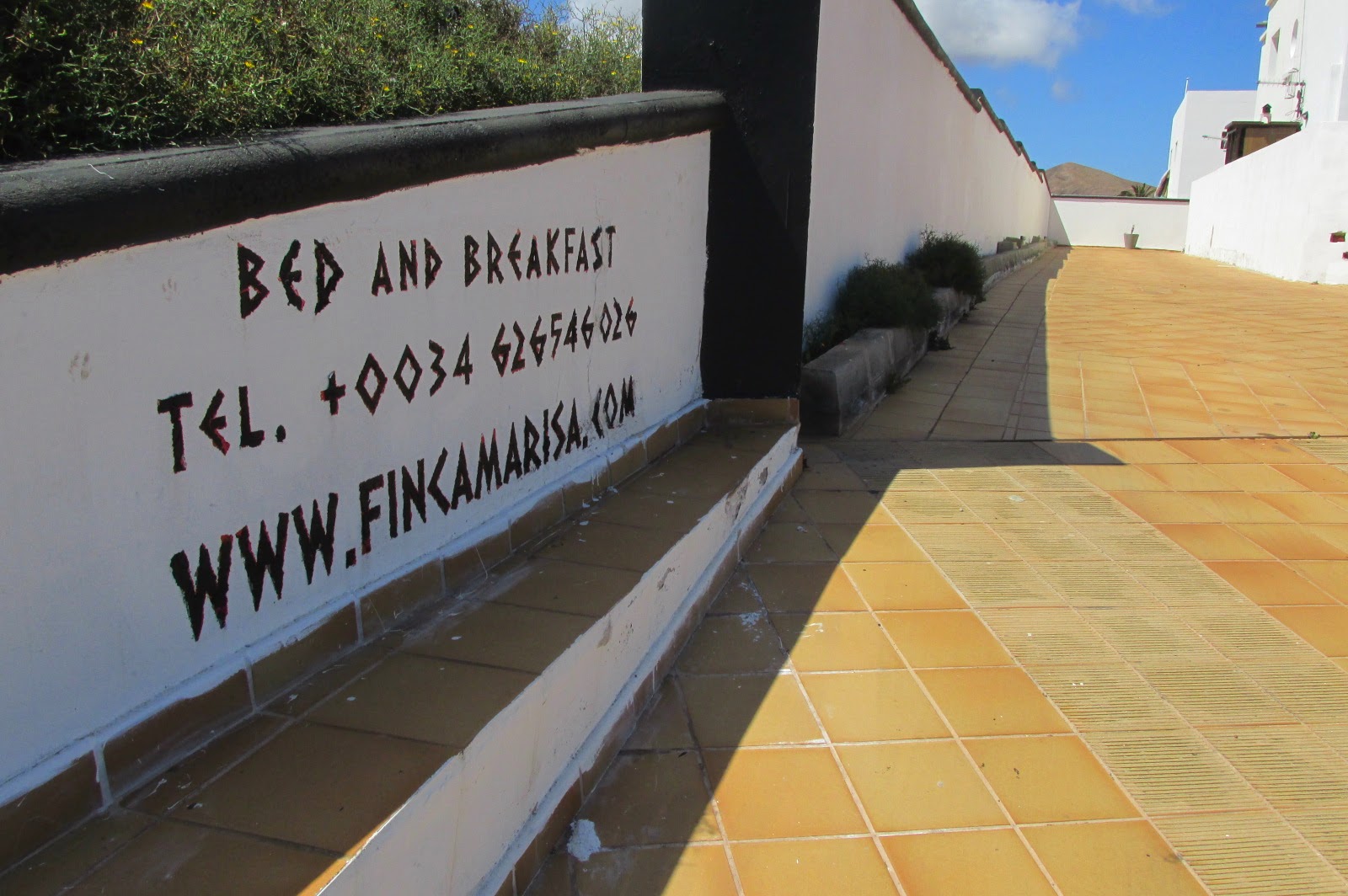 Initially my plan was to run until there and to come back by bike, of course. But I was tired and it was to warm outside, so I took her offer very happy.
We went together there. A lot of professional bikes. A very professional store. Not exactly what I was looking for this time as I had a strange feeling it could be too expensive. And it was too expensive: 22 euros per day!!!!! I paid 22,50 euros in Puerto del Carmen for 3 full days for a good mountain bike, man!!
So, we returned by car to Tinajo and she called the store in Puerto del Carmen, owned by an Italian family. In one hour and half I was delivered with a powerful road bike for 16 euros per day.
It is my friend for the next two and half days: 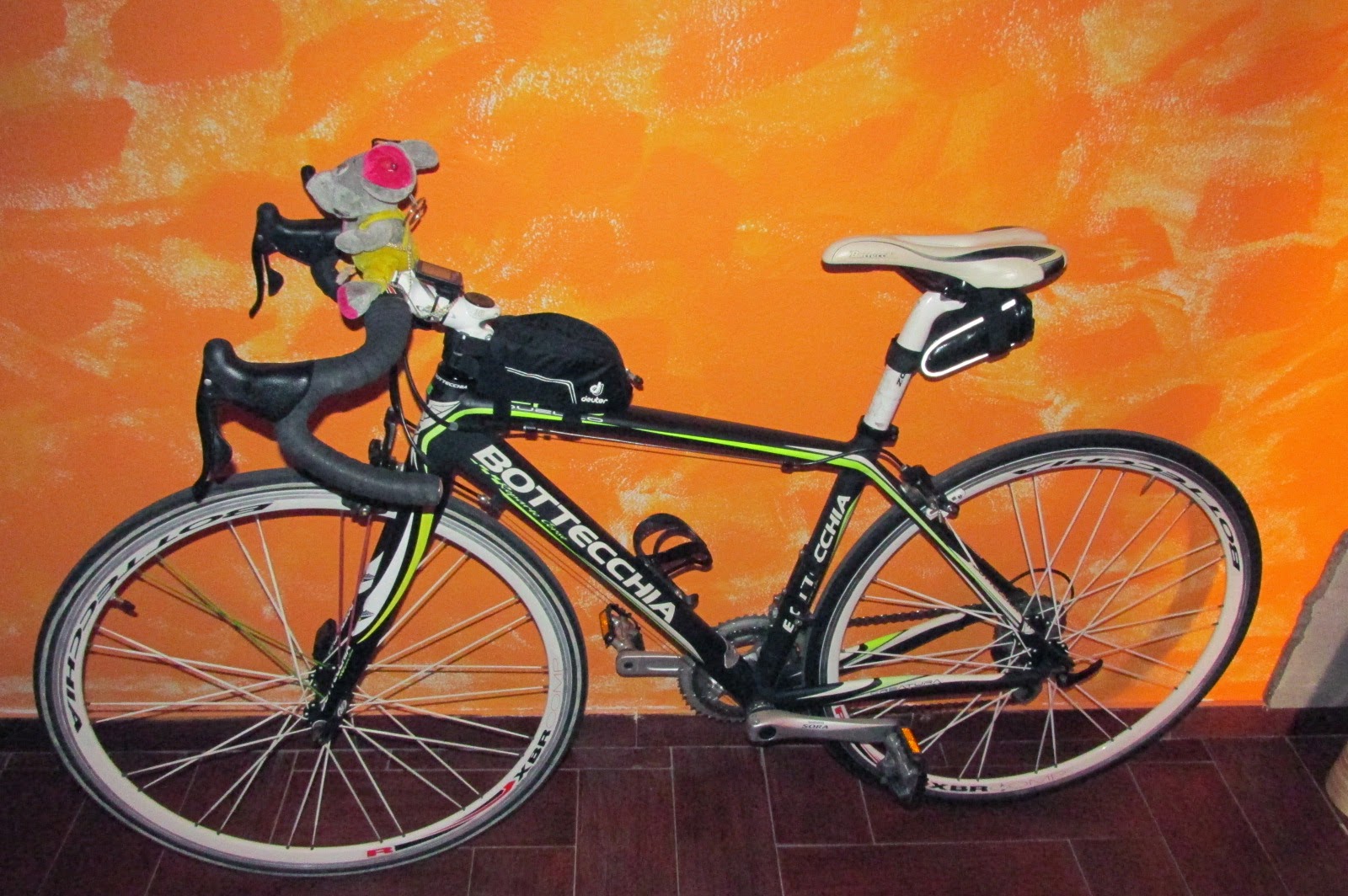 I am not used with such a race bike. Not so low in the front. This is the disadvantage of renting in this way, you cannot choose the bike you feel good with. You have to be sure about the size, pedals, type. If the store would have been here, I would have not rented this bike, but probably a slim mountain bike again. And the adventure I was into today would confirm the idea. 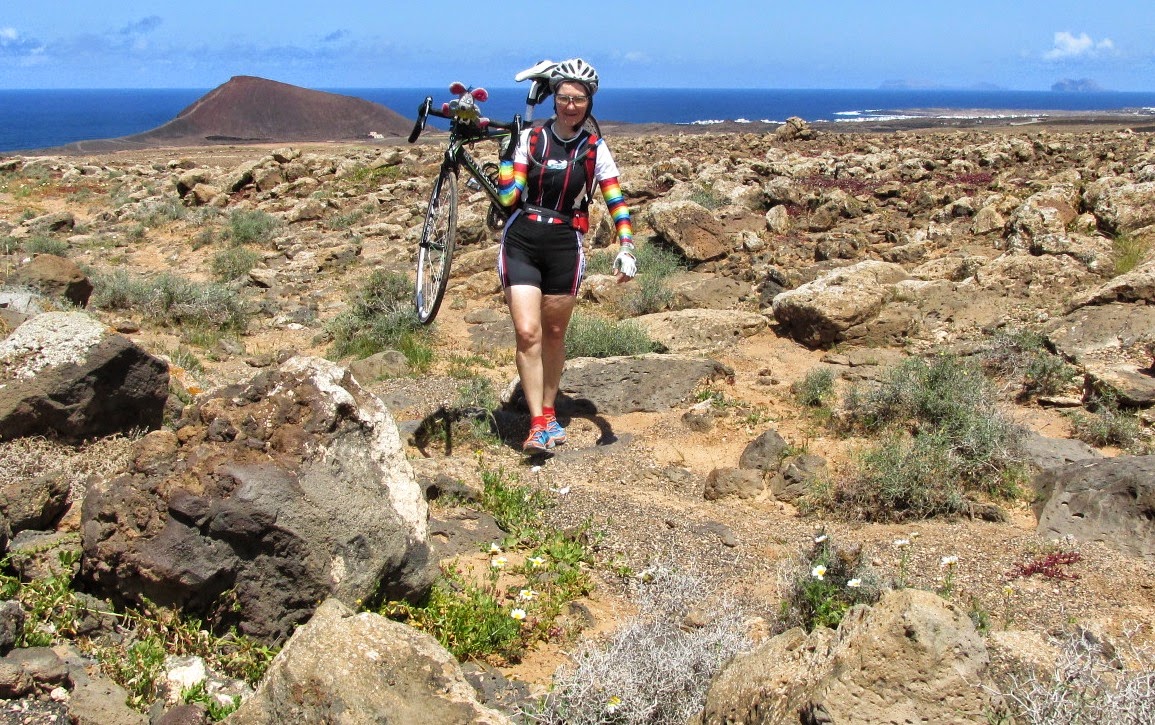 But, in the given situation, I took the bike, I paid and .... "have fun and good luck with it, Anca!! Here is our phone number for any emergencies :-)"
"What kind of emergencies?"
"You know, if the bike breaks down ...."
"Or if me break down ...."
"Yeh, then we call the hospital and visit you with flowers and chocolate."
OK, good to know!