The feeling of Hallstatt in Salzkammergut, Austria 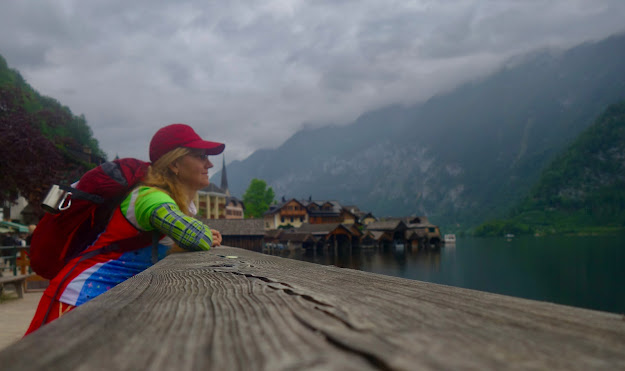 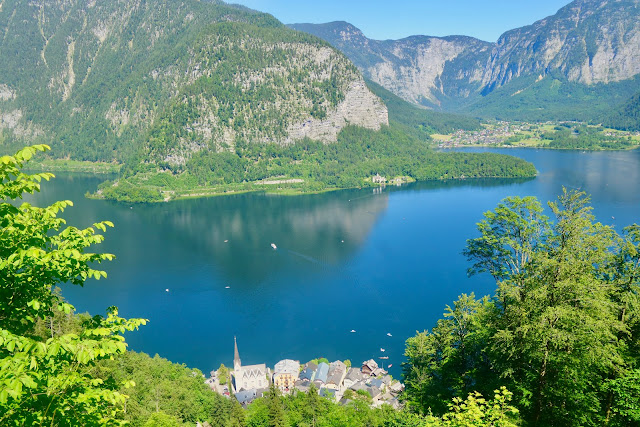 I saw many such places in the world. Or maybe I am too sensitive and I get fascinated too easily. It doesn't matter. Somehow I had short moments when I could believe I am in Venice (the narrow ancient alleys between ancestral stone and/or wooden houses that seem to hang from each other on the steep mountain slopes) or in the middle of Norway (although the mountains there are softer, rounder and totally different, but the combination of such a big lake nestled in the green valley ......).
What it does matter is that I still can find the fascination! The process of fascination is a thing of spirituality and growth - I would dare to say. 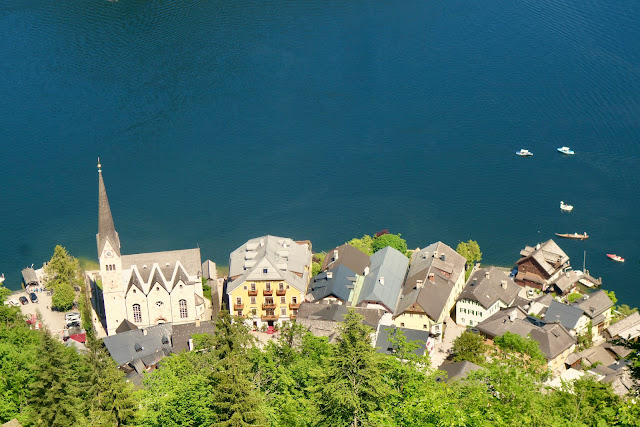 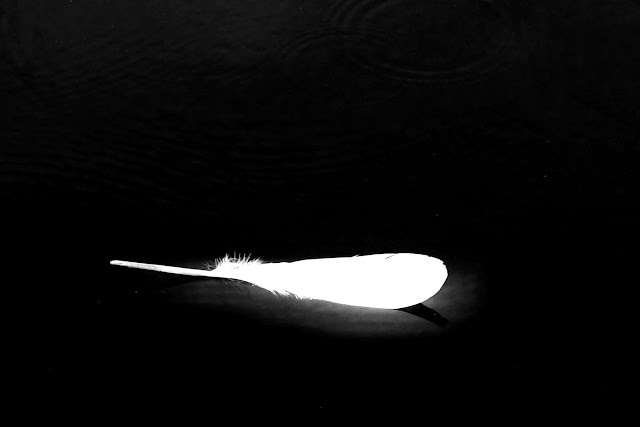 I reached Hallstatt twice in three days (being invited by a client). Once by bike and once by bus. I overnighted in Bad Goisern. There are few options to reach Hallstatt from Bad Goisern or from Bad Ischl: by foot, by bike, by bus, by car, by taxi.

Reasons to visit Hallstatt?
Well ...... it depends what defines you. 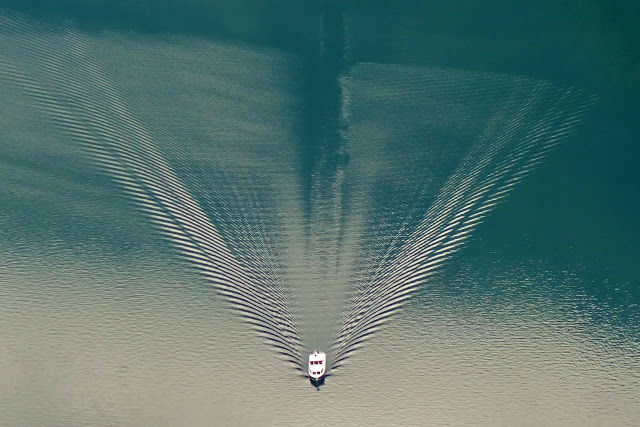 It depends what fascinates you and how much from what you see in a moment can you perceive. Be ready for a tremendous amount of information and colours in Hallstatt. Be ready for a steep hike. For a lot of ancient history and old architecture. Be ready to be amazed. 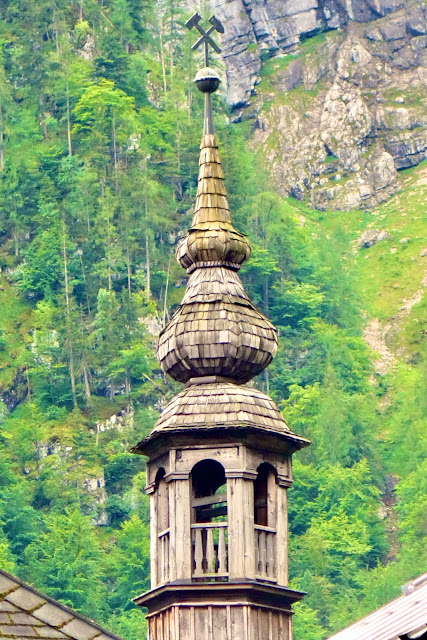 Be ready for tired feet. Be ready for Chinese hotel names, food, hosts, designs, music. Depending on the season, try to avoid Hallstatt in summer months while the high touristic season can kill a part of this quiet place. As I came here on the first day after about 25 km by bike it was hot and crowdy. I decided to return the next day, a Saturday. Then I thought it is for sure not such a good idea, as Saturday is check-in day and the borders are open now and being a long weekend for so many people (started on Thursday!)  ........ 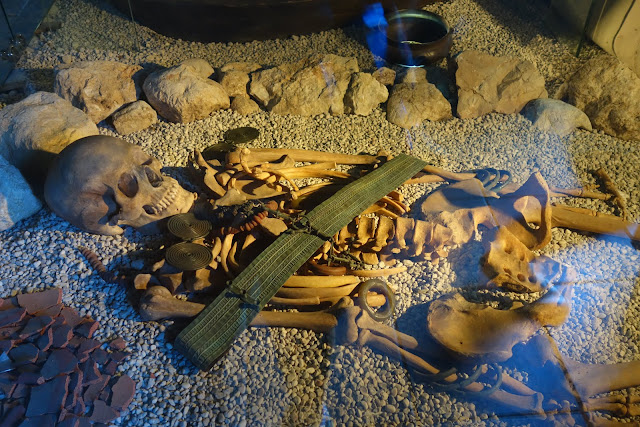 So I said to me, "Let's come on Sunday in the morning!" And yes, it was the best decision. Sunday is a check-out day after an overcrowded prolonged week-end. It was rainy, cloudy, chilly and just perfect for a long-long walk (six hours is a really long walk :-)), decent pictures and visiting the oldest active salt mine in the world! And a probably unique manifestation of art .....

Alongside the world’s oldest salt mine and the idyllic, world-famous postcard view, the charnel house or ‘Bone House’ in St. Michael’s Chapel is one of the most interesting tourist sites in Hallstatt. The chapel dates back to the 12th century and is located next to the catholic parish church. Each year, visitors from throughout the world come to admire the unusual collection of over 600 artistically painted skulls. Many of the skulls were decorated at the end of the 18th century, but a few are from even the 20th century (Source). 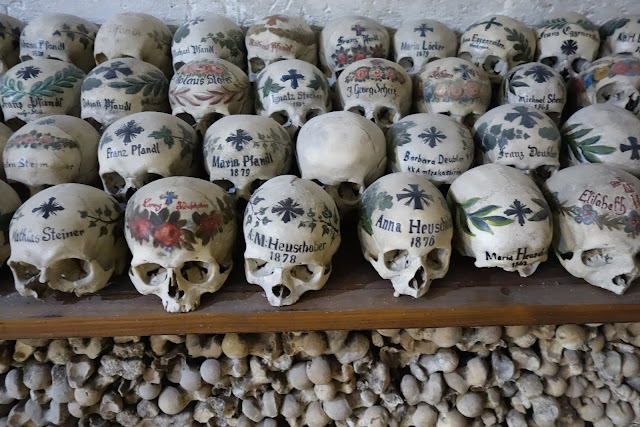 Skull painting was carried out primarily during the 19th century and belonged to a cultural area that mainly consisted of the eastern Alpine region (the Austrian Innviertel, Upper Austria, Salzburg, Tyrol, and Bavaria). 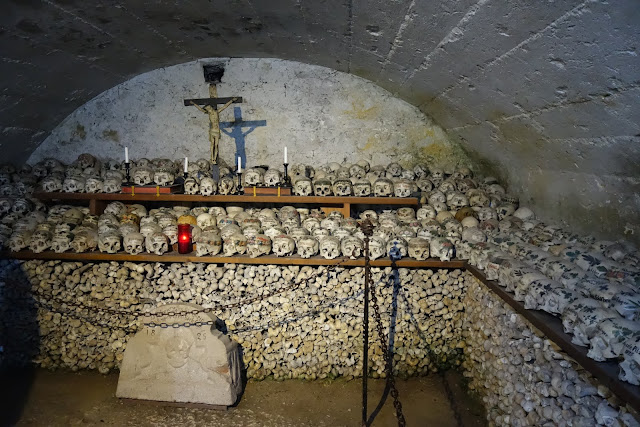 Even during modern times, this custom has still been in use in Hallstatt. Hallstatt is home to the largest collection of skulls ever, with few other collections still in existence. When an existing grave was reused for a new burial, the skull or bones were transferred from the grave to the charnel house or ossuary as part of a second funeral. The identity of the deceased family member was preserved by decorative paintings and inscriptions. Depending on the family relationship or based on artist choice, the skulls were labelled with names or initials. At times, no markings were used to identify the deceased. 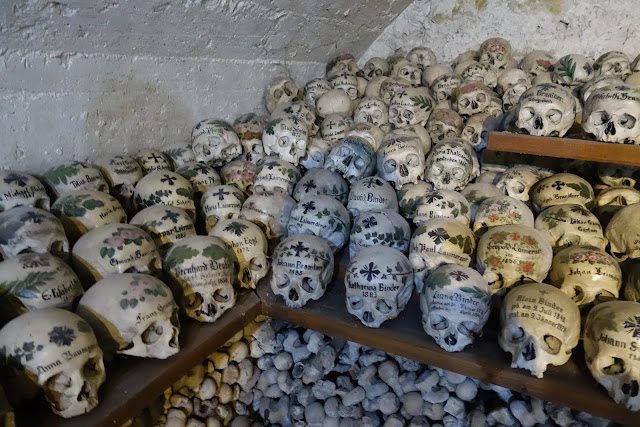 Although it is clear that various methods of painting were implemented, there is also evidence that the painting style followed a particular development. This evolution is also apparent in the manner in which the names and initials were written. Prior to a study from 1974 to 1993, there were conceptions regarding the painting which did not correspond with the actual artistic development. It was also accepted that the skulls had been placed in the charnel house due to a lack of space in the churchyard. During earlier investigations from 1948 to 1950, 2104 skulls, both painted and unpainted, were documented. Since there were approximately 30,000 entries in the church death registry prior to 1900, it is clear that the remains of the individuals housed in the charnel house represent only a small fraction of the deceased population. 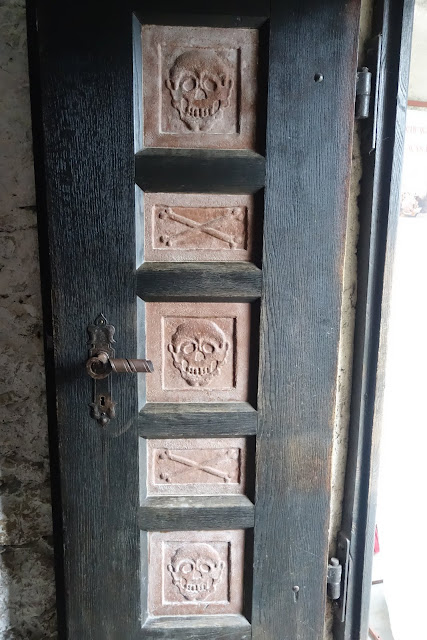 There is evidence of family tradition in the skull paintings and numerous painters were active during this time period. With few exceptions, certain painting styles emerge as characteristic for particular eras. Skulls with wreaths are the oldest—the darker the wreath, the older the skull. Thin wreaths and coloured crosses with contoured edges are the latest examples of this type of painting. Flower ornamentation on the forehead marks the next phase of artistic development followed by green leaves on the temples (oak, ivy, oleander). A black cross on the forehead was almost always included. 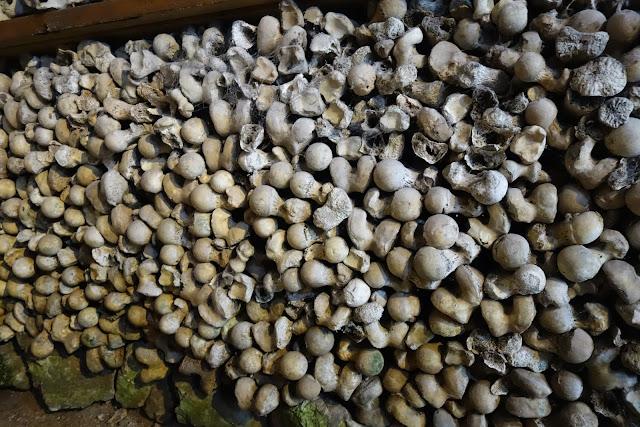 The latest paintings from the beginning of the 19th century are characterized by thin ivy branches on either side of the skull, Latin script and comparatively narrow crosses. At times, skulls only carry the name of the individual. Some paintings are copies of earlier examples. During the last few years of the 20th century, very few skulls were interred in the charnel house. 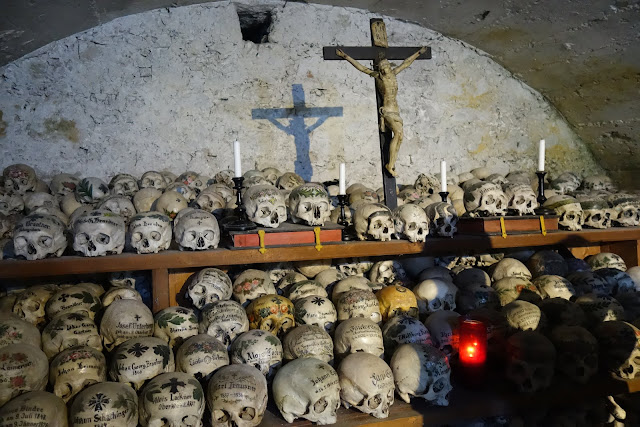 St. Michael’s Chapel: Home of the ‘Bone House’
Located adjacent to the picturesque cemetery and next to the catholic parish church, St. Michael’s Chapel is considered the home of the charnel house. Donated by the salt merchant Eysl in 1612, the baroque Michael Altar stands in the eastern section of the chapel. The baroque pulpit located on the northern wall was moved from the parish church in 1905. The rear altar originates from the former hospital chapel in the Hallstatt village district of Lahn. The two stone lanterns on the village side were once used during funeral masses. The exquisite stained-glass windows in the gothic section of the chapel, located in the upper story, depict St. Michael with the Balance of Life. 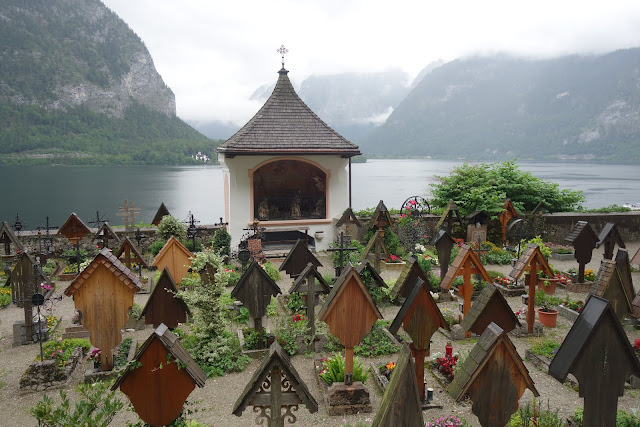 Read about the archeological site in cellar