Golling - 25 km away from Salzburg to Zell am See

On a heavy rainy day today, driving back from Salzburg to Zell am See, about 25 km from Salzburg and 70 km before my destination on A10 I took the highway exit to Golling Burg. 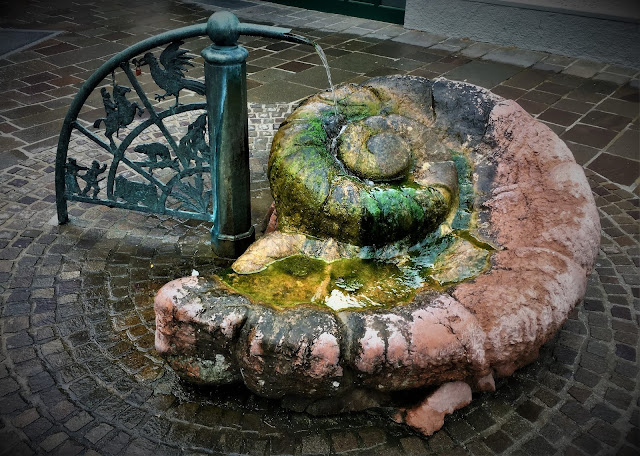 It was an absolutely spontaneous decision at the moment I saw on the edge of the highway a huge label about "Golling Burg" and because one of my first profession wishes as child was to become archaeologist, I never can resist such of tentations :-)
If Austrians are very good in something, that something ist merchendising and exploiting the potential of their amazing beautiful country. A small, conservative, but a fascinating rich country in variety of landscape and traditions. Yes indeed, Austria is at the same time a historical crowded spot, with a solid old architectural story which can be seen along the way in all directions - all the medieval and even ancient castles (Burg) and huge animal quadrangular farmer households - and a generously natural space surface where the nature still has its place. A sweet combination between wild natural potential and man's intervention. And  a Land of Old Castles & Fortifications!
They simply love their country and take good care of it. National flag has two colors: red and white. You can see these two colors everywhere and this has a deep impact on the colective mental. It is what I call it: "the small detail which makes the big difference".
Now is  the period of time when you see the best their love and care: the tunnels all over the country are washed and cleaned, this means by the way major deviation from the normal driving routes and longer driving times; the trees are cut and coiffed so that they stay healthy; the roads and highway edges are cleaned and the vegetation or possible dangers (big old trees which could fall apart over cars, animals or people) are removed, bridges are cleaned up, washed and verified and the list can be continued. It is a huge amount of work which is done. Slowly-slowly, but efficient and mostly in due time before something wrong happens.
The more I stay here, the more I get - or I think I start to - to see into deep and to understand this place, but somehow I have to notice that the process takes an unexpected long amount of time ....

Actually I was looking to find the way to a total different castle in the area which draw my attention every time I drive to Salzburg. But entering Golling today and looking for further information, I found out the name of the castle I was looking for: Hohenwerfen. So, that is on my TO DO list for the next week, before the summer holiday tourist invades the area.
I parked the car near the community office where free parking is allowed for 90 minutes. It was exactly 12 p.m. as I reached Golling, lunch time for most of institutions and small shops. The picture above is the first I took and it is the Golling Burg. 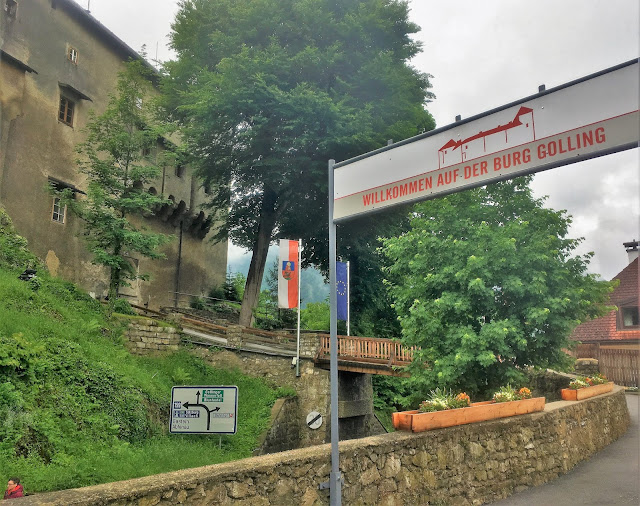 Coming back home in the afternoon, looking for more detailed information seemed to be a challenge. I didn't find much about the place and about the old castle and the reason of it can be, the facts are not known.  I found some elementary information mostly on Wikipedia. And yes, Wikipedia is worth to be spend for, 20 or 50 Euros each year it make sense when ever I can afford. 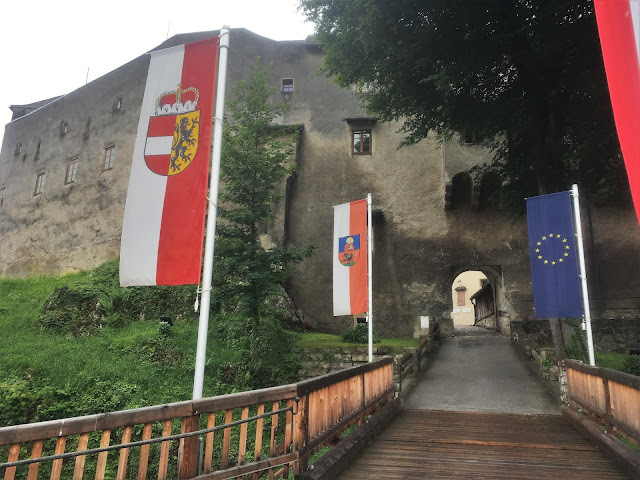 Golling an der Salzach is a market town in the Hallein district of Salzburg, Austria.
The town’s name reflects original settlement by the Slavs ("golica" in Slovenian means "grass-covered mountain").
A further source indicates that the name is due to the Roman Col or Colle (accusativ singular "hill"). 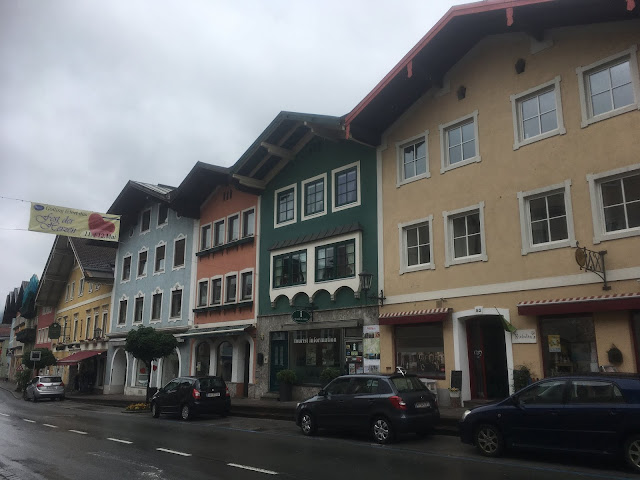 1241: The first documentation of the town's name as "Golingen" (still with one "l" at the time) in acharter by Archbishop Eberhard II.
1284: Golling was first mentioned as a market town. 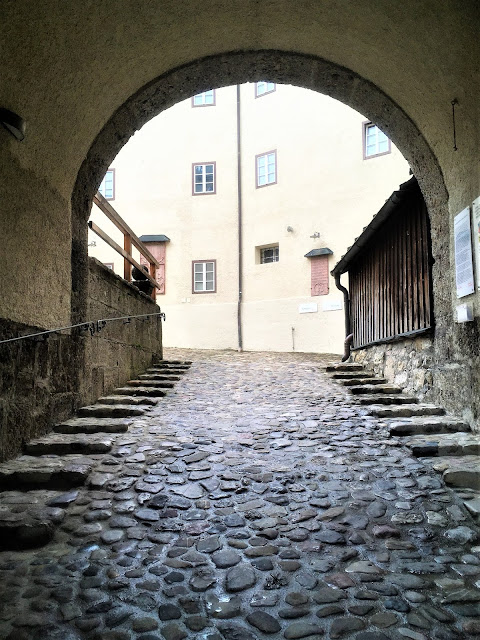 This institution served as a lower-level Bavarian and Austrian administrative body from the 15th to the early 19th centuries, and exercised sovereign authority. 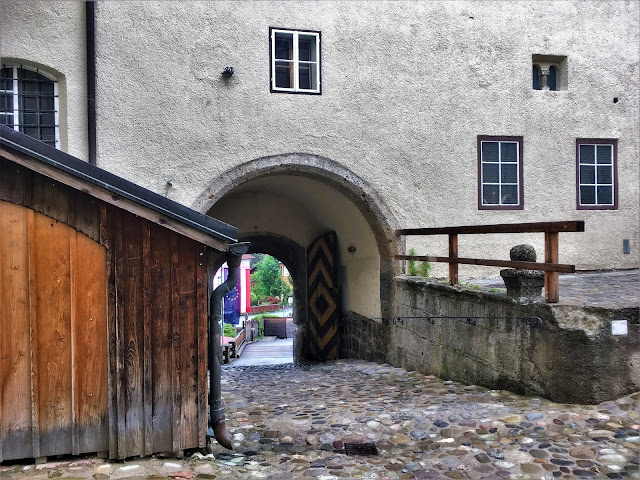 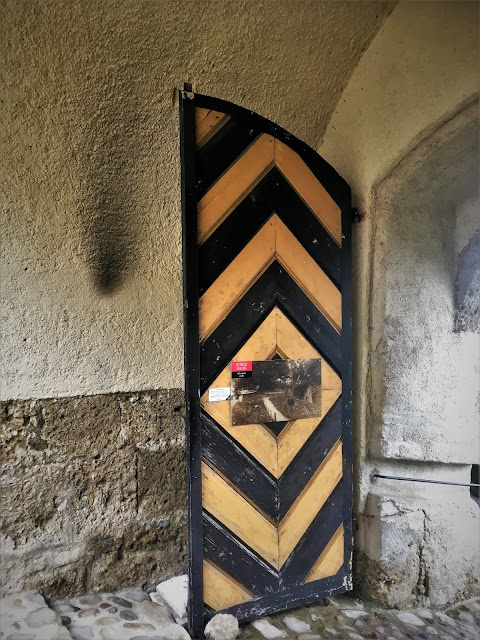 It was headed by a so-called Landpfleger, essentially a judge, who exercised civil, police and punitive authority, as well as military leadership.

1809: Battles were fought between the allied French and Bavarians against the Austrians and the Salzburg state militia on Pass Lueg. 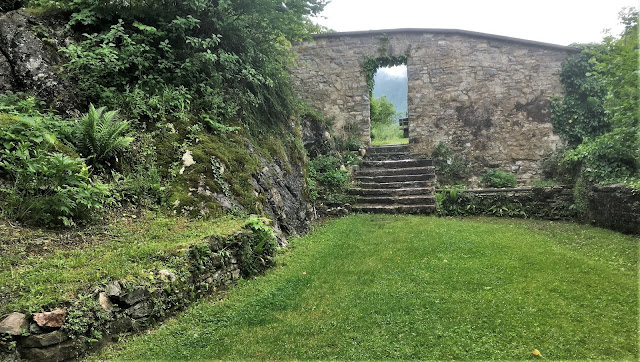 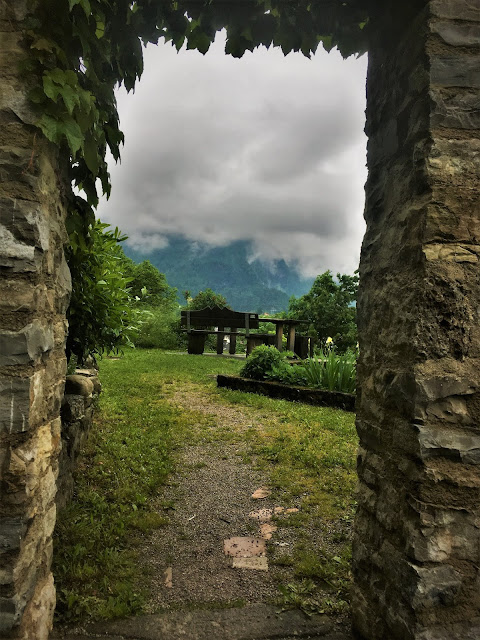 1820 The Pfleggericht was re-established under Imperial & Royal authority. 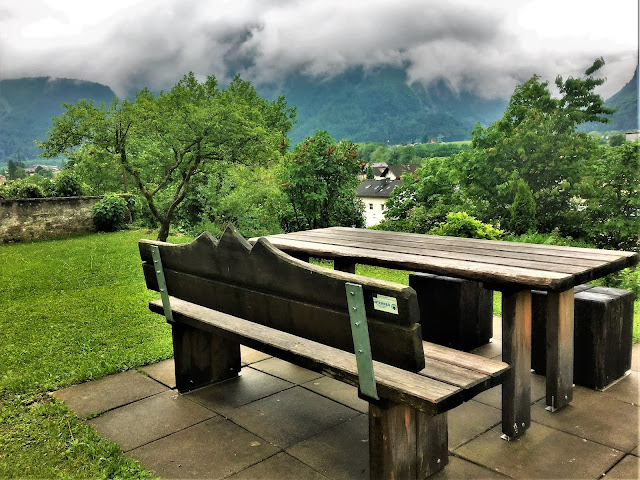 1896: The political district of Hallein (Tennengau) was established, with the integration of Golling. 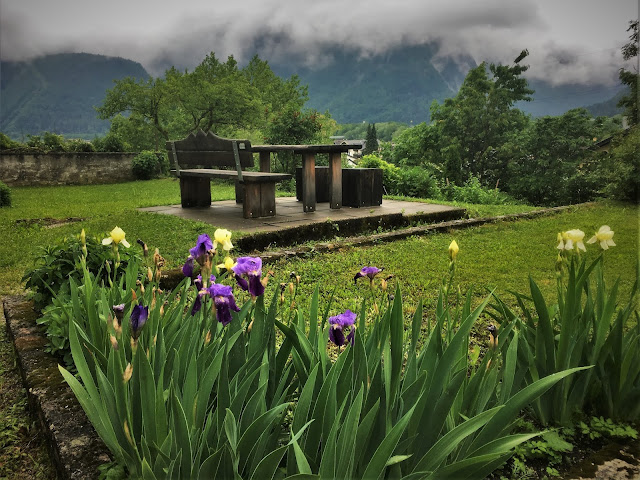 1936: The previously independent villages of Obergäu and Torren were incorporated into Golling. 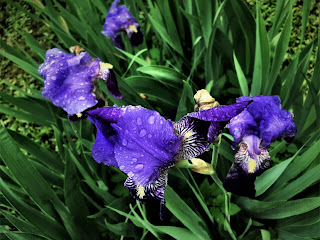 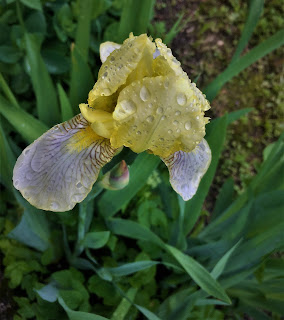 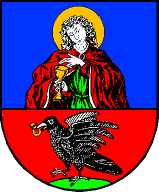 In the upper part of the coat of arms is patron saint John the Evangelist, who is holding a golden chalice in his left hand that he blesses with his right. In the lower part is a black raven. Here is the story behind this: "Once upon a time, there was a castle on the Hiasenwand. When the lady of the castle bathed, she laid her diamond ring on the window ledge. The ring disappeared without a trace. The ervant was suspected of having stolen the ring. He was convicted and later exected. One day, a shepherd found the lady's ring in a raven's nest. Since then, the raven has been depicted with the ring on the coat of arms."During the Roman period, a Roman watchtower protecting the road from Iuvavum (today's Salzburg) to Virunum (today's Zollfeld) was located on the hill on which Golling Castle was later built. In addition, there was a Roman altar and a Villa Rustica in the neighboring and today belong to Kuchl Katastralgemeinde Kellau. 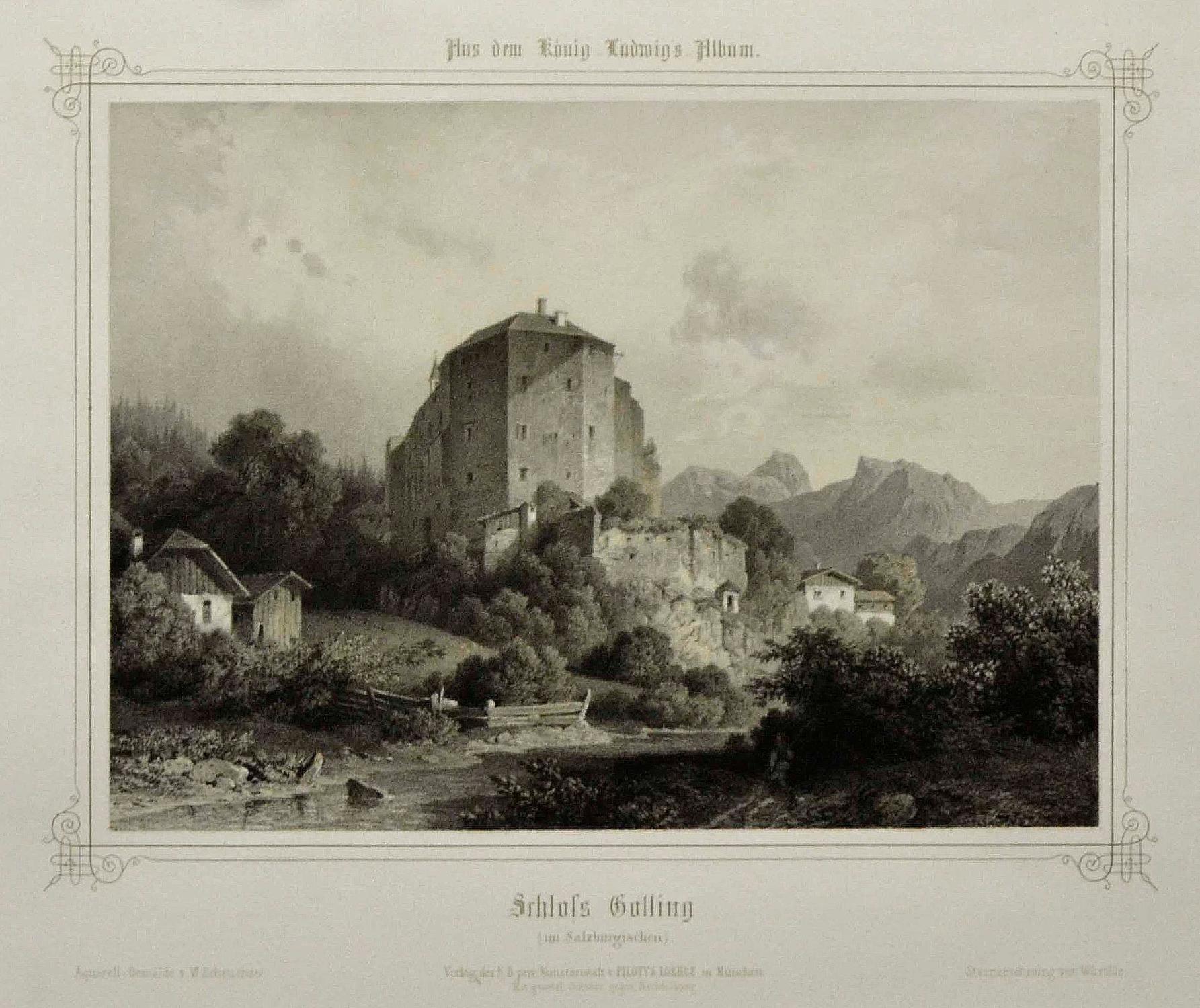 Der Name der Marktgemeinde Golling wurde 1951 offiziell zu Golling an der Salzach geändert.
I walked a bit downtown admiring the old, but well conserved row of buildings .... so much color, so many details, so much hand working .....

Reaching back home it cames into my mind: "If I only could to change something in this world, I would let vanished all big supermarkets and corporation. I will let the small businesses to flourish, I would let human beings to exploite and use and develop their creativity instead of killing them and pushing them into standards and constraints. Big and much, having much and more, unlimited more, becoming selfish, greedy, accummulating without any need, destroying nature, things and souls ..... is this the human's being purpose on this Earth, to destroy all around and himself?"

I returned to my car, took the last pictures of the day and said "good-bye" to Golling for now. 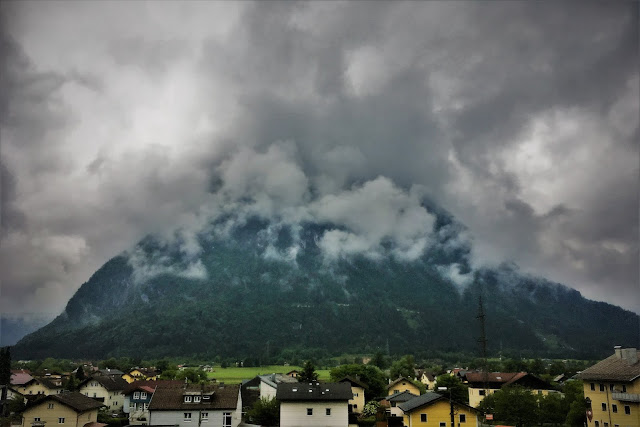 And this is the Fortification I was hopping to find today ..... but I found the name and the path to it for my next journey.

The fortification of Hohenwerfen was built between 1075 and 1078 at the behest of Archbishop Gebhard of Salzburg during the Imperial Investiture Controversy, meant as a strategic bulwark atop a 155-metre (509 ft) high rock.