I had the opportunity to be in St. Pölten - one of the oldest cities of Austria - three times so far (TO bike IM 70.3 St.Pölten 17.05.2015), but only for very few hours and for very focused goals, so I did not see too much of the city, unfortunately.
Before yesterday afternoon I arrived here coming from Linz for my first cycling race (Radmarathon Sankt Pölten 2015) and yesterday morning before the race I took the chance to walk for about two hours inside the historical area of the city. 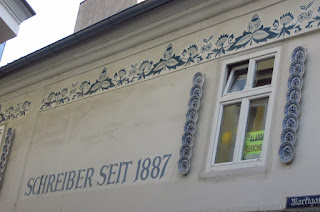 Admiring this house I reached the box of memories: as little girl I liked a lot to sew and this - the upper blue line design - was one of the favorites of my mother which I was taught to sew!!
The St. Pölten area of today was settled since about the 3rd millennium BC. There are numerous finds of painted ceramic culture and even traces of the Bronze, Iron and Celts Ages have been found. 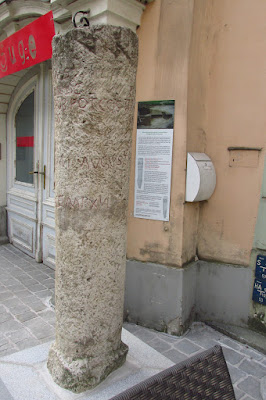 At the exact spot where in the Middle Ages was The Old Town of St. Pölten there was - since the end of the 1st century to about year 450 the Roman city Aelium Cetium.
The Roman city was one of the most important civil supply cities of the Roman Province Noricum, from which one could reach the soldiers covered town borders on the Danube - within a day's march only.
Archaeologists have documented numerous findings since 1988 and the Roman map is now in outline form known. The today's Wiener Strasse/Heßstrasse is located on the same place as the Roman city main street was located. 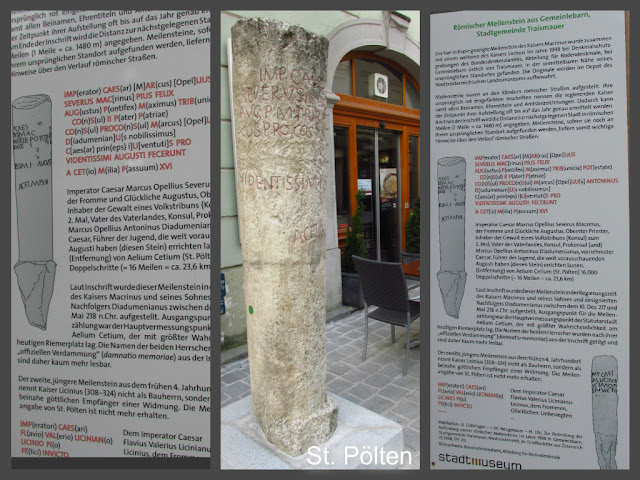 During the second half of the 4th century the inhabited area or the Roman city began to become smaller. In the first half of the 5th century the majority of the population has left the city in an attempt to find safer places in settlements along the Danube River Protection Line.
The latest document of ancient life - a grave together with a bowl - comes in around the year 450. Aelium Cetium was therefore abandoned and for several centuries the place was not inhabited (settlement interruption). 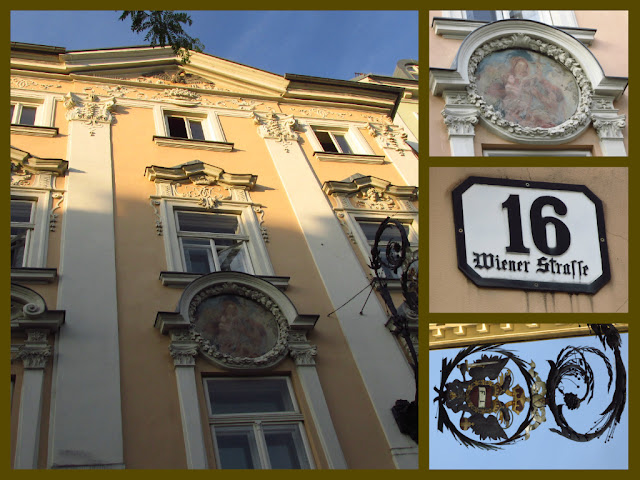 Many of the questions about the establishment of St. Pölten are still unanswered after current state of research. It is certain that it originated in the early Middle Ages in the area of ​​today surrounded by the promenades downtown both a monastery (the Hippolytklosters) as well as a secular settlement. The archaeologically documented monastery was built by the Tegernsee monastery, perhaps, but after the avars campaignes* of Charlemagne (from 791), not later than 850. 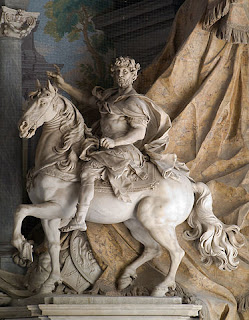 *In 788, the Avars, a pagan Asian horde that had settled down in what is today Hungary (Einhard called them Huns), invaded Friuli and Bavaria. Charlemagne was preoccupied with other matters until 790, when he marched down the Danube and ravaged Avar territory to the Győr. A Lombard army under Pippin then marched into the Drava valley and ravaged Pannonia. The campaigns would have continued if the Saxons had not revolted again in 792, breaking seven years of peace.
For the next two years, Charlemagne was occupied, along with the Slavs, against the Saxons. Pippin and Duke Eric of Friuli continued, however, to assault the Avars' ring-shaped strongholds. The great Ring of the Avars, their capital fortress, was taken twice. The booty was sent to Charlemagne at his capital, Aachen, and redistributed to all his followers and even to foreign rulers, including King Offa of Mercia. Soon the Avar tuduns had lost the will to fight and traveled to Aachen to subject themselves to Charlemagne as vassals and Christians. Charlemagne accepted their surrender and sent one native chief, baptised Abraham, back to Avaria with the ancient title of khagan. Abraham kept his people in line, but in 800, the Bulgarians under Khan Krum also attacked the remains of Avar state.
In 803 Charlemagne sent a huge Bavarian army into Pannonia, defeating and bringing an end to the Avar confederation. In November of the same year, Charlemagne went to Regensburg where the Avar leaders acknowledged him as their own ruler. In 805 the Avar khagan, who had already been baptised, went to Aachen to ask permission to settle with his people south-eastward from Vienna. The Transdanubian territories became integral parts of the Frankish realm, which was abolished by the Magyars in 899-900.
The settlement has not yet been detected archaeologically, both as name of origin and their location within the old city are controversial in the research. Maybe it's identical to the place Treisma, who is mentioned in texts of the 9th century several times. In any case, in a document from the year 976 from the settlement "Treisma" the "Monastery of St. Hippolytus" is mentioned.From this monastery, the town got its name: "Pölten" is a Germanized form of the masculine name "Hippolytus". The patron saint of the city was the Western Church father and first anti-pope of history, Hippolytus of Rome (c. 170-230). 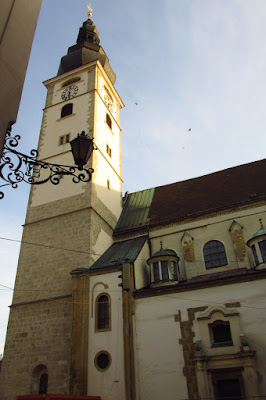 St. Pölten didn't become a town until 1050 and officially became a city in 1159.
Until 1494 St. Pölten was part of the diocese of Passau, and then became the property of the state. A Benedictine monastery was founded in 771.
In 1081 it hosted the Augustinian Chorherren and in 1784 their Kollegiatsstift closed. Since 1785, this building has hosted the cathedral of St. Pölten.
The city replaced Vienna as the capital of Lower Austria with a resolution by the Lower Austrian parliament on 10 July 1986. The Lower Austrian government has been hosted in St. Pölten since 1997.
The name St Pölten is derived from Hippolytus of Rome. The city was renamed to Sankt Hippolyt, then St. Polyt and finally St. Pölten.
The Hippolytus monastery and the separate settlement were the germ cells of the medieval city. The development of the St. Pölten old town, which was surrounded in the High Middle Ages from city walls (built from about 1253 to 1286), but only in 1367 came to a first qualification.
Around this time the area within the walls surrounding the city was for the first time largely built. Despite the long break after settlement Roman city the development of the medieval town was strongly influenced by the system of Aelium Cetiums.
Not only that was demolished the crumbling ruins and their substance used as a building material, some of the ancient Roman monuments - such as the cathedral square - it has adapted and used. Some of the medieval streets and squares newly created or lost are exactly where previously stood Roman streets and squares (!) 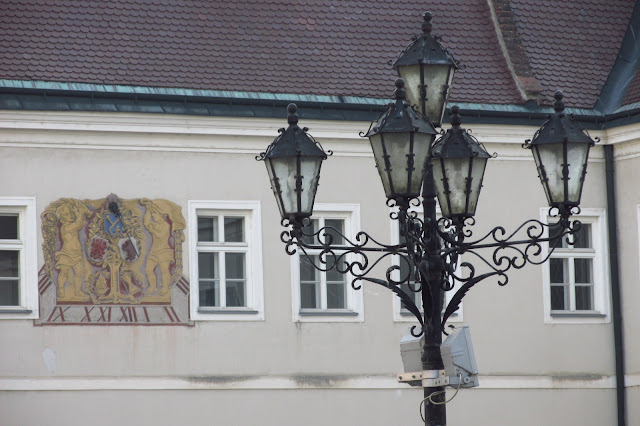 The old part of the city located close to the train station have to be walked and felt. It is a beautiful combination of ancient, old and modern and offers a fantastic flair and charm.
I was very impressed about the area and I have to go back for 1-2 days. 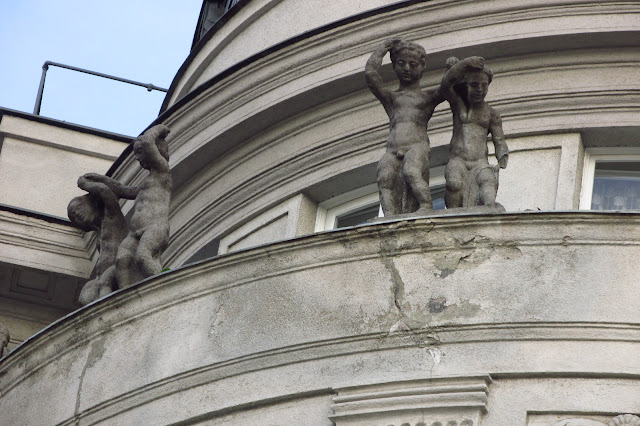 I was here early in the morning between 6 and 7:30, almost nobody around. It is worth to wake up in the morning and to do such a photographic tour, believe me! Then get relaxed and go back in the afternoon to enjoy the life on the historical streets of Sankt Pölten! 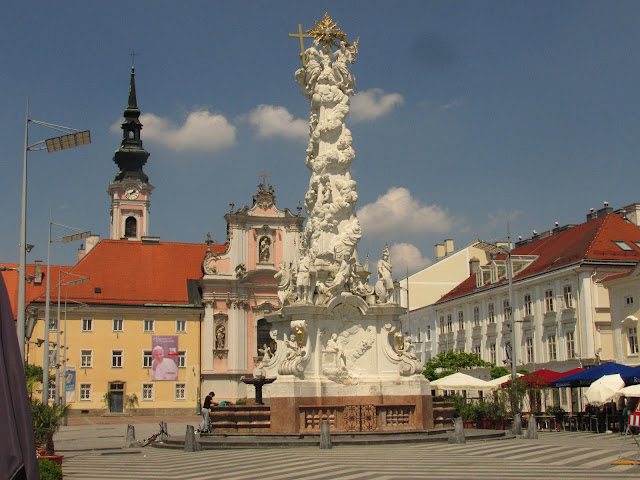 I spend the night in the most unfriendly, austere and empty hostel I ever saw in my traveler life. I use hostels pretty often and my experiences so far were pretty nice in location from Rome, Florence, Paris, Zell am See, Cluj, Brasov, Sibiu etc.
Imagine a hot summer day, about 38°C, a large space hostel, a very large dinning room, a nice kitchen with refrigerator. You come in, put your water and cake and fruits in the refrigerator and later in the evening when you go there .... the door is locked  and a huge notice on the door is screaming to you: "no entry! Access is allowed only for the staff!" - Which staff is ONE PERSON!!!!
Do you know another hostel in the world where you are not allowed to use the kitchen????????? I will tell the story later, because now I cannot download the pictures. I had to jump on the window to reach my water from the refrigerator!!
You have to make the bed by yourself, when you leave you have to take the sheets and put it in a box outside the room. Not big deal, but somehow strange .... you have to make the bed when you arrive .... this I find strange, to be honest. No towels, not even for rent. No nothing. A big nothing. Just the roof over your had for 26 euro per night in an ugly building, last floor, near the train station .... so I could hear all the announces about departures and arrivals of trains.
Internet connection extremly slow, so I used mine!!
Otherwise very clean. Austere. No welcome anywhere, no typical atmosphere .... I do not wonder it was empty .... So, this is my feed-back for Jugendherberge am Bahnhofplatz 1a in St.Pölten. 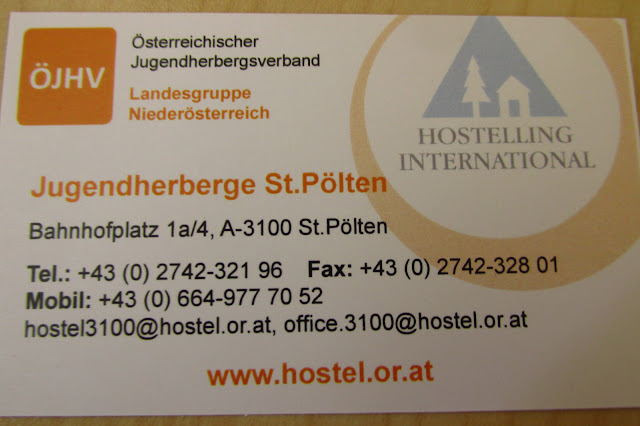 Even if the location is weird, a little bit of imagination and minimum of investment for some colors and funny objects could help that place to become a very nice place to stay, more familiar and enjoyable as it is very close to the train station. But if you have a staff one-man-show 7-12 and 17-20 .... a young girl in a tiny room, isolated .... strange experience.
About the breakfast ....... more minimal than this I never lived before, not to forget that due to the house rule you are not allowed to use the kitchen if you need to prepare something to eat or if you need to put something in the refrigerator (!!!): 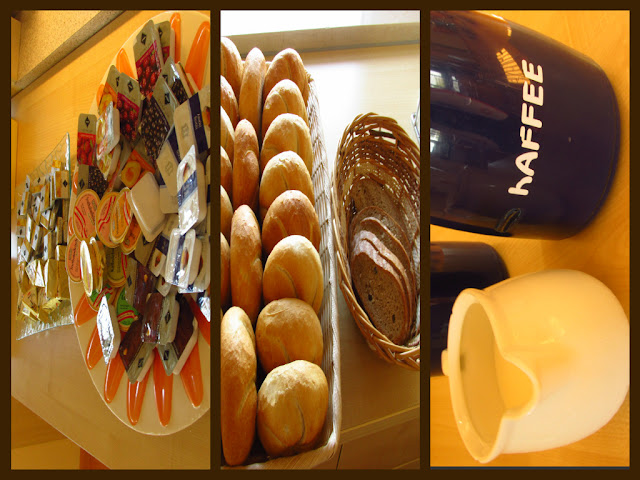