Sporty snails and burned out minds 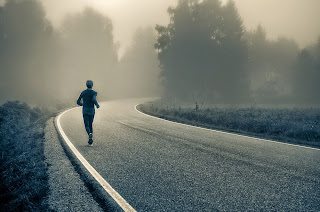 A man goes out in the morning for a long run.
He could not sleep all night.
He was told he is sick and have to take off from work for a while.
Get the mind clean.
He runs in the morning at a crazy hour. At he never could do before, he likes to sleep long in the mornings. But now is different.
Steams from the ground are covering the island.
The moon is big, full, partially covered by cold heartless clouds.
The mountain (Kahlenberg) is somewhere behind the frog. 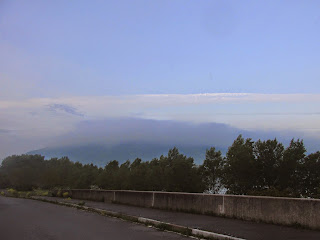 He runs fast. One km. Three km. 3:55 pace. 10 km.
On the middle of the road a big snail runs too.
His own speed, of course. But he runs.
The rain over night stopped.
The runner stops too, takes the snail from the middle of the road, he puts it in the wet grass and run further. He runs slower. 6:30 per km now. Powerless. He almost give up to run. He walks ....
The snail is in his mind.
He would like to run his life so fast as the snails is doing all the time.

Tuesday morning, 05:25 a.m., Donau Island, Vienna:
A cyclist enters the Donau Island taking pictures of a cloudy foggy morning.
The mountain (Kahlenberg) and the village (Kahlenbergdorf) are hidden behind curtains of mist. 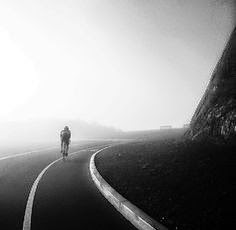 He was told he is sick and have to take off from work for a while. Get the mind clear.
He cycles in the morning at a crazy hour. Very fast. 2 minutes per km. Then 1:50 per km. Ten km. Twelve km. 15,5 km in thirty minutes.
A very low mist curtain cover the road 20 m in front of him in a curve.
A rabbit is running across the road.
All over the places ravens are jumping, low flying, observing, watching, croacking.
The ducks are still sleeping.
Some of them are making funny noises. They probably dream about something.
The cyclist stops.
He is listening.
The grass is growing. Grass growing does not stop.
He sees a runner coming from the mist.
He turns around and cycles back. Slowly. 3 minutes per km. 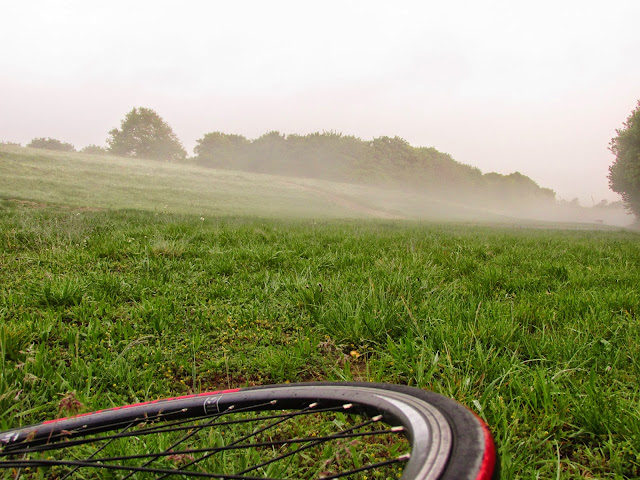 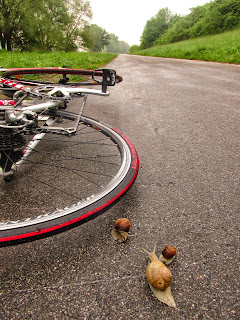 After a while the runner is approaching. He stops and takes a sit watching the snails.
What are you doing here?
I am not sure.
You too ....
What do you mean?
I am also not sure anymore what I am doing.
Yeah ....
Are you OK, man?
I am not sure, man.
Silence. They watch a movie thinking to their own lives .... why did the humans transformed the life into an endless race?

It's all about perspectives.
And perceptions.
How are you, man?
I am burned out, man. And you?
Me too, man .... so I was told. I had no idea how it feels, I always just read about others being burned out.
Now we know and others will read about us. 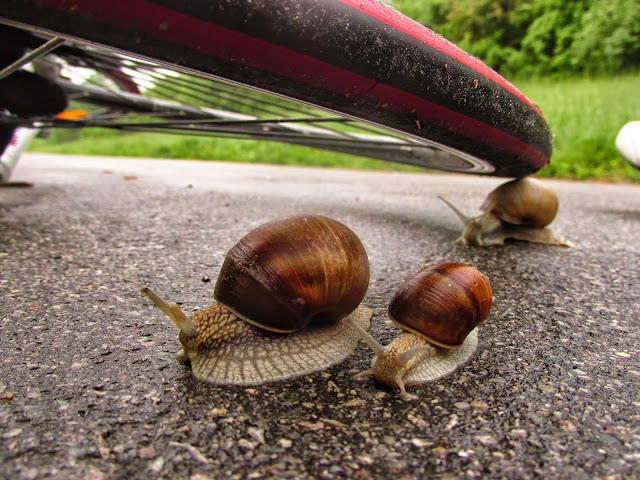 Two sporty adults, one under 40 and the other up to the 50 y.o., are sitting at 6 a.m. in the middle of the road and are watching to three snails different sizes who went out for a slowly walk after a long night rain. And they sit there for one hour long. Speechless.
I hope you get the picture ....