I didn't check out the weather forecast, as usually. But after yesterday's experience as the rain started while I reached Greifenstein Power Station over the Danube and it was pretty cold, today I was better equipped. But not enough, as I had to find out later :-)
I left home due to a spontaneous decision at about 1 p.m. It was chilly and pretty cold, maybe 12°C. After 3 km when I reached the road along Danube to Greifenstein I saw the sky :-) 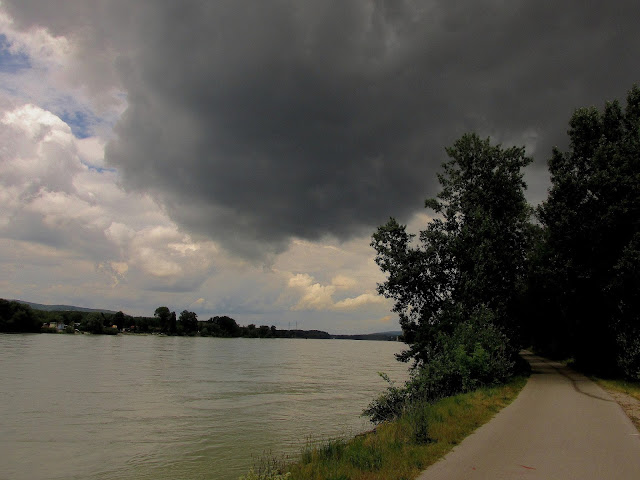 and I continued cycling, of course :-) I wasn't at all in the mood for a competitive cycling, but I wanted to be out, to feel free, to be close to this image from my old life dream which I never could explain: me happy cycling along a big river ..... and look at me, I am here and I am cycling along a big river!!! Exceptional experience ....
The rain reached me in the exactly same spot as the day before!
But today I was better dressed, long treasures, long sleeves, wind and rain jacket in the pocket ..... so I celebrated with dance and song and told to the strong fast rain: "I don't care, I don't care, I am singing in the rain and I go further today, you cannot stop me !! :-)" 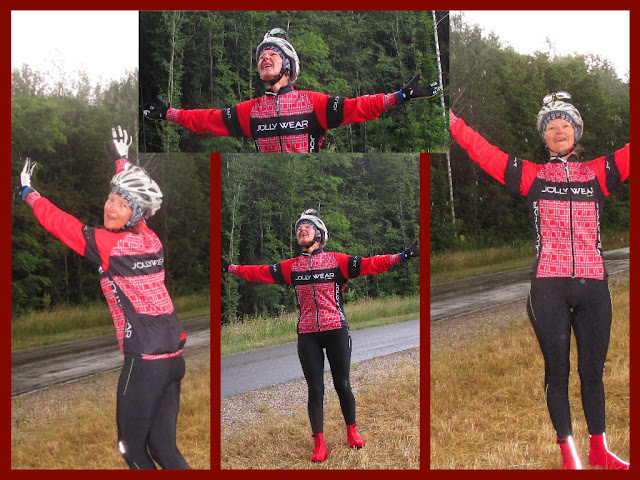 I stopped for about 10 minutes, the rain was too strong and why getting unnecessary so wet, sooo early, after only 15 km?! I felt a little bit cold as the temperature dropped, but I ignored the feeling. 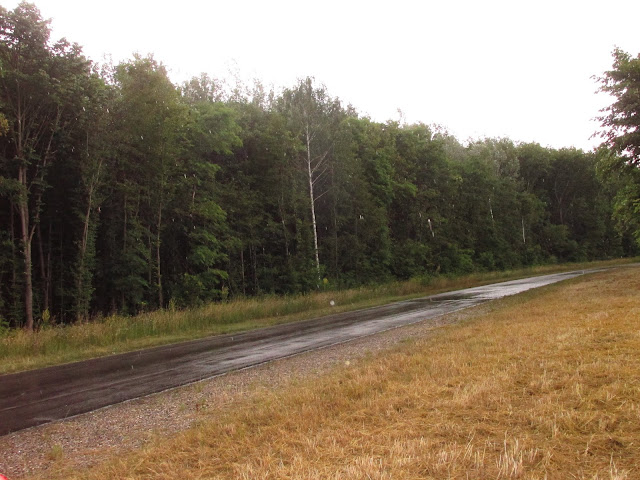 I entered the Power Station to cross the Danube and smiled again to the friendly sky, as I felt we have a real dialogue now, right?! It said to me: "Go-go, girl! I watch over you, you just take care and go! See you later :-))" 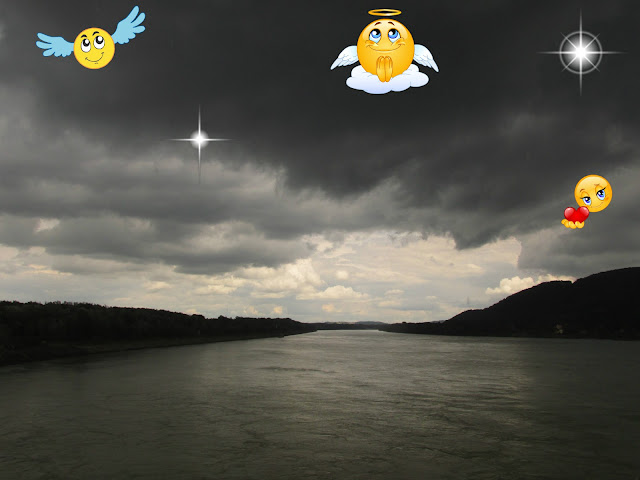 And I continued my ride, the rain stopped. For a while.
I reached Greifenstein and then I started the navigation system, so I was told to ride about 3 km on the main street ..... I crossed Höflein an der Donau and I reached Kritzendorf. I then turned right on the Neudauerstrasse - Hoheneggersteig ..... which was much to steep uphill, for me impossible to ride on it. And the rain started again .... so I now was walking uphill but it was very arduous with those SPD-shoes .... 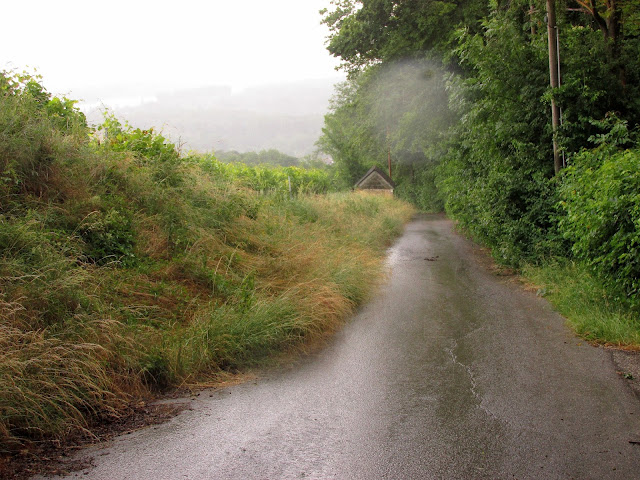 And it was cold. A cold strong and fast rain, waters began to flow on the road from the hill down .... it was extreme, so I decided to stop and to try to find a refuge under a tree.
From there I watched the wild rain falling ....Now it was the moment when the rain smiled and told me: "Sorry, girl, but I am stronger .... smile!" 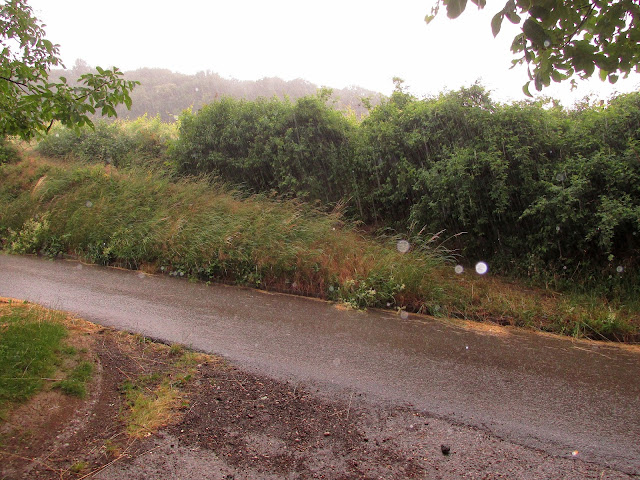 And I smiled ..... After ten minutes as I felt I am going to freeze under the tree I started to move my arms in a frenetic static run .... brrrrr ..... cooolllldddd and wwweeeettttt ..... and kept smiling .... avoiding to think about HOW I will be going to get downhill from there whith my shoes!
After another ten minutes the rain stopped and I knew how I get down from the tree :-), because  on that point of the steep hill I felt as the little cat in a high tree .... having now idea how to reach the ground again. What to do?! To start to cry and wait for someone to save me, to pick me down from the tree?! 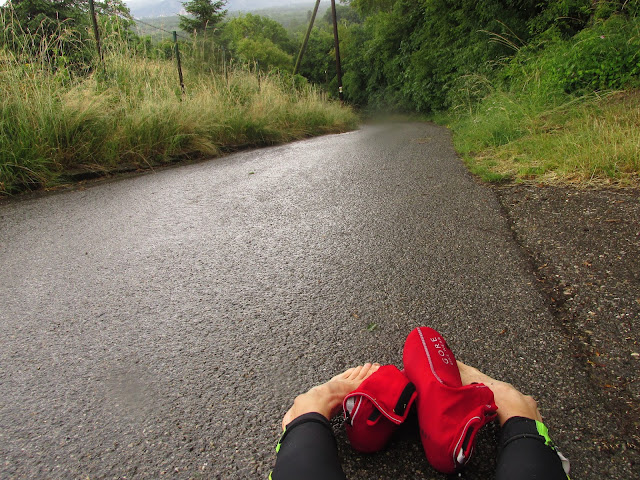 And so, in this funny non-sporty way - being afraid otherwise I could slip and be hurt again!! - I began my descent giving up to continue going uphill until the end point of Hadersfeld. It is important to always have solutions in the pocket :-) 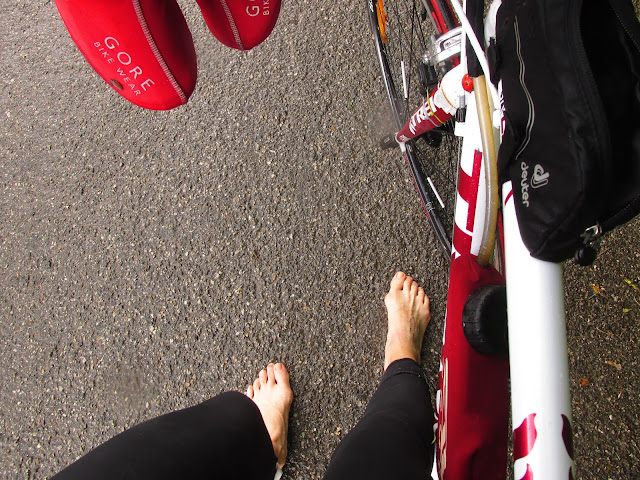 I knew it is a place where I have to return, but with a second pair of shoes in my backpack. 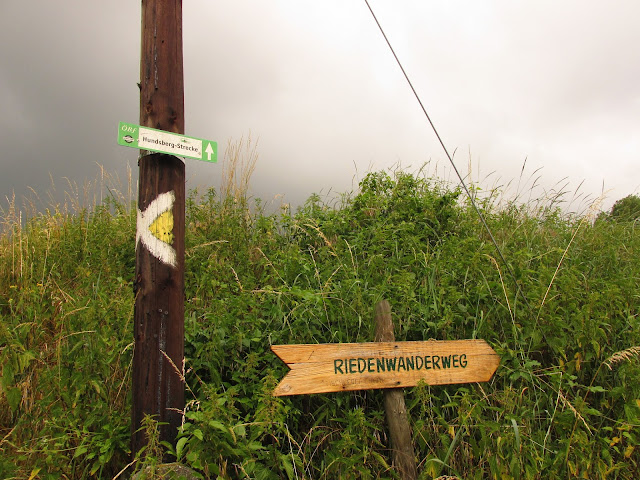 I then followed a different street, Feldstr. .... I had no idea where I am, but the rain stopped again and a sort of shinning sun was coming and I was fascinated about the area .... old villas, narrow street, old walls ..... I was in Kritzendorf - another full of charm Austrian small village - about 3.000 inhabitants -.
So the journey started and the photo camera goes in action now .... 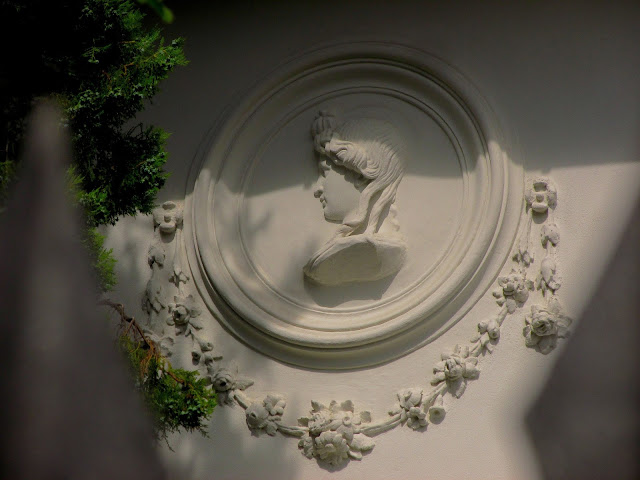 Every step was a new fascination ..... 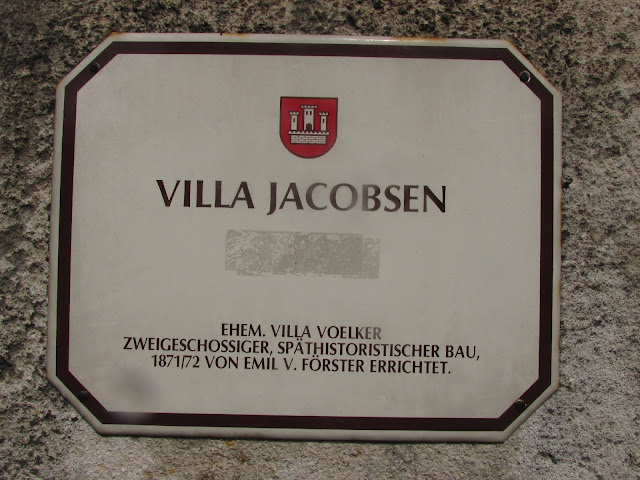 Many buildings in Kritzendorf are under the Austrian Law of Historical Preservation and this villa is one of them. I found in internet an old picture of the building: 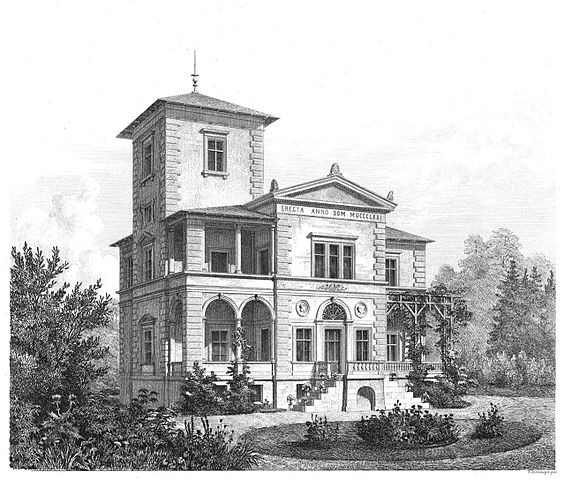 And without to know I took many other pictures of similar old buildings: 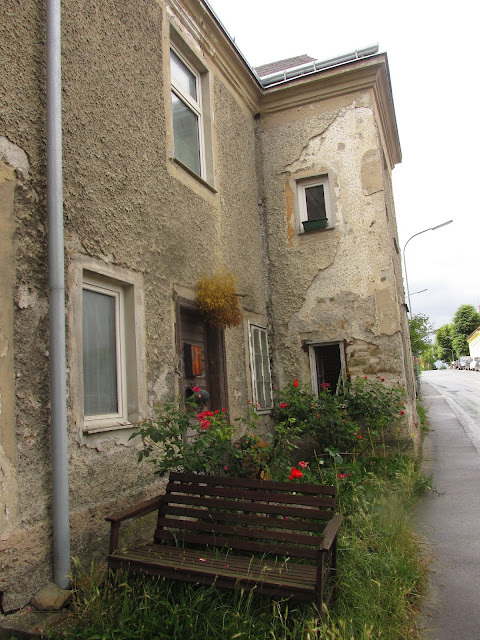 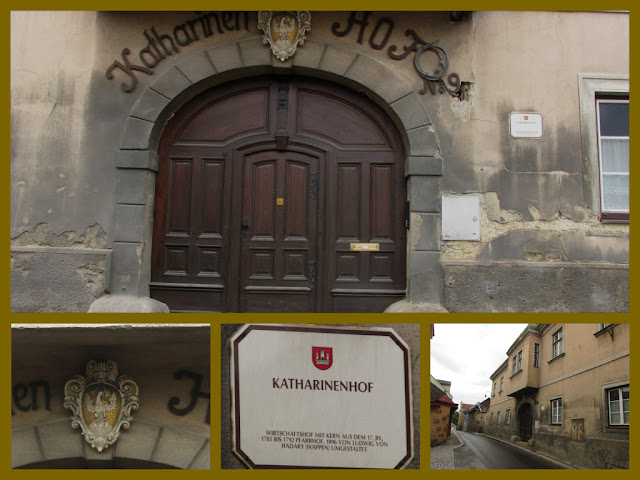 The Church was built in 1460. A small, but high old late Gothic style: 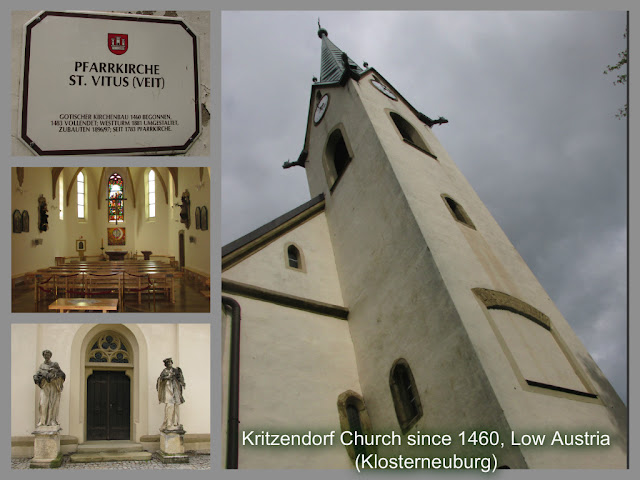 I walked through a short segment of the place about one hour .... I am sure there are a lot of other stuff to be seen there. 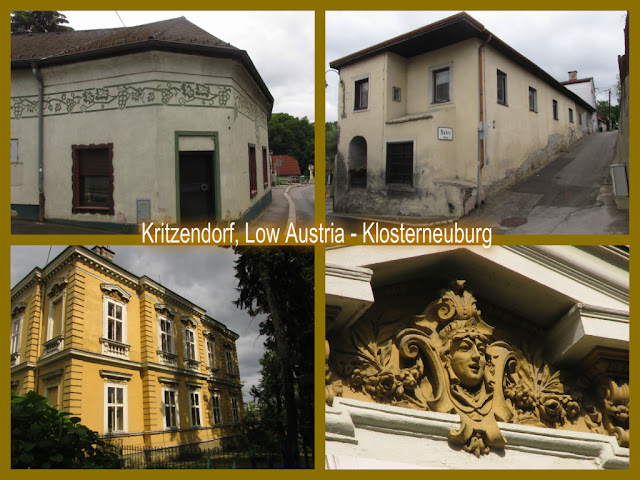 Rain started again, I was cold, I was wet, I was hungry .... so I started to look after the right direction back home :-) 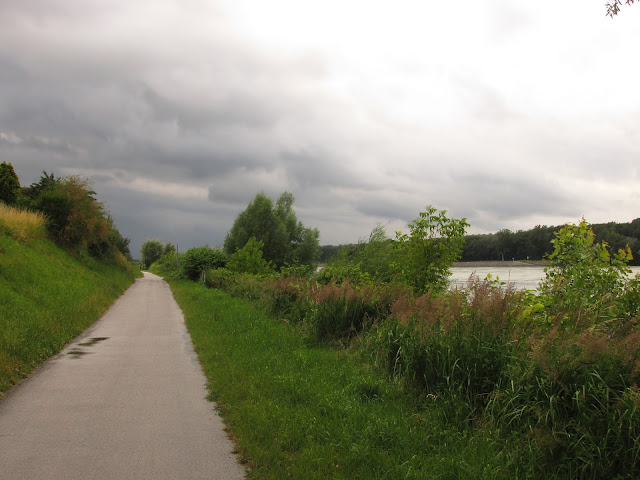 And voila, me, riding along the Danube again. Frozen hands, free mind, empty stomach, full imagination :-)
As I reached my place again, about one and half hour later, the sun was shining ..... yes indeed .... 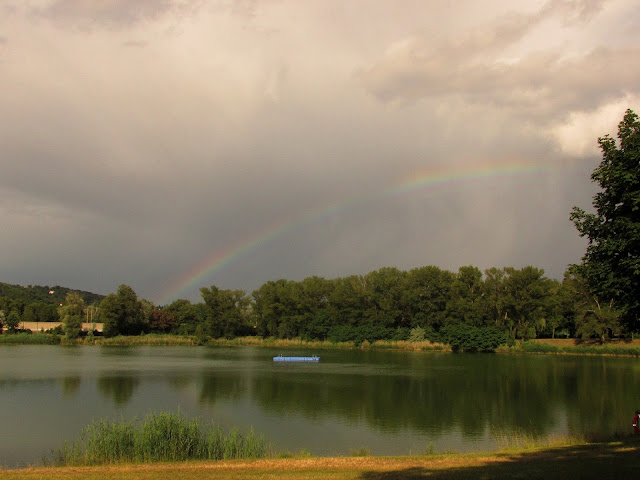 Nobody was swimming in the lake and only few people were walking around ...
I stopped here for about twenty minutes just watching .... 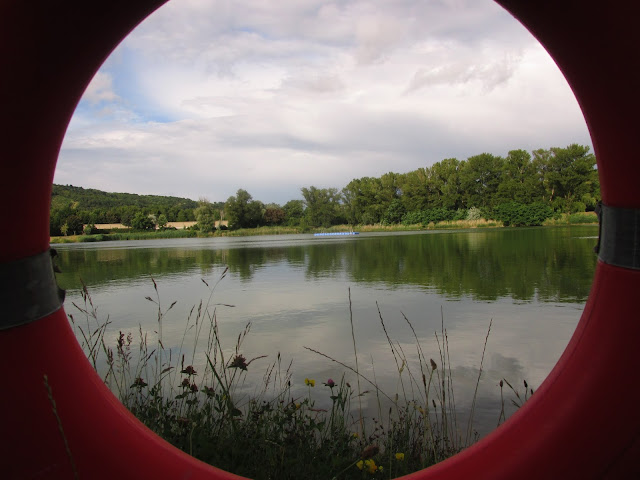