Some stuff about drafting (TO Bike_Linz Triathlon 2015) 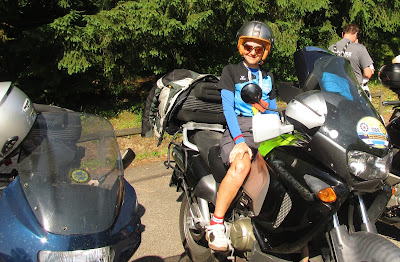 There is a lot of information about this event on its 11th edition, as it is a pretty complex one.
As I was asked if I would like to come as Technical Official on the cycling route I said yes.
First of all, I liked a lot on the bike route at IM 70.3 St. Pölten and I am willing to save so much experience as TO as I can!
Second, I never say "no" when I have to chance to be on the road again.
Third, transportation (and somehow accommodation) costs were covered and this was very important. So I said YES even if I knew it will be a busy and exhausting long week-end (which for the moment does not matter so much as I do not have to go in the office on Monday morning).
So, Friday driving to Linz: 209 km, about 2 hours. Going to the event area to see how the things are. Beautiful area, generous place, wonderful swim in the lake. At 2 p.m. was the start for Kids-Triathlon.
Saturday, 6th of June, technical meeting with the staff at 7:30 in the morning (this is why I choose to come to Linz on Friday afternoon), on duty for check-in post for about one hour and half and then on the motorcycle with Peter as driver for several hours.
At 15:45 I left Linz driving to St. Pölten (130 km, 1h15min) and on Sunday I started for my first road bike race! - leaving St. Pölten at 14:45 and driving back home to Vienna. 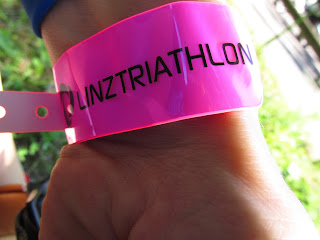 I have to say that the experience with the motorcycle driver in St. Pölten was better, as the guy was more carefully and gave me a security feeling, no sudden movement, not extreme speed.
The context was also a little bit different, as in Linz the traffic was open, this means a lot of cars, which is a big challenge for competitors and for everybody involved, motorcyclists on duty especially. Races with open traffic are not so enjoyable for anybody, but this is not a reason not to start on it. You have an additional stress which influences your race, your mood, performance, this is for sure.
CHECK-IN point:
There were 2 check-in gates and we were 3-4 TOs for each of them. We had to check:
- if the competitor has the closed helm on the head;
- if the competitor has all start numbers with him: on the saddle bike, on the left side of the helm and the body start number.
We were not supposed to check the breaks or anything to the bikes!
The competitor have also to wear the colored access bracelet. 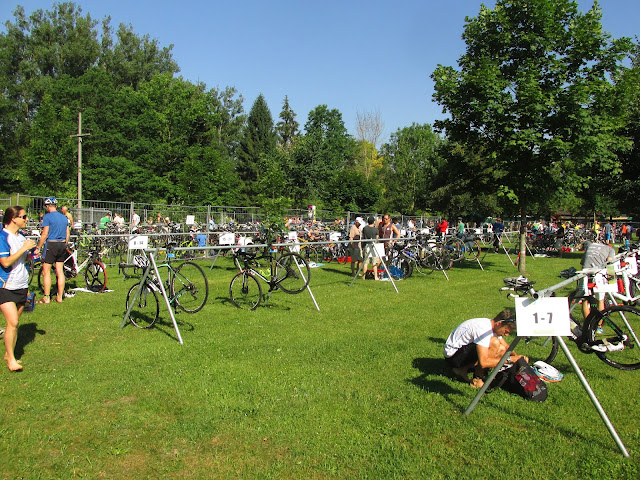 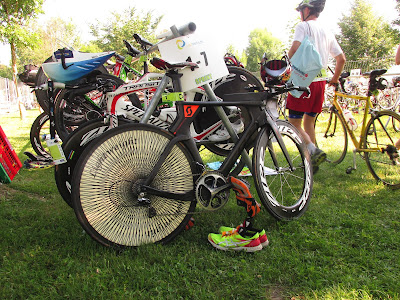 After the transition area is officially closed, nobody is allowed to go inside for any reason. If the competitor wants to add something to his equipment - sun glasses or towel or what ever he forgot - he can ask a TO to do this for him/her.

Event structure was, as I mentioned before, pretty complex for the day and it was probably the hotest day of the year so far!
The big half distance triathlon:
1,9 km swim - 90 km bike - 21,1 km run.
The new half of the half distance triathlon (a sort of hybrid-Olympic):
900 m swim - 45 km bike - 10,5 km run.
The sprint distance:
750 m swim - 25 km bike - 5 km run.
All distances could be done as individual and as team.
The event included:
° Upper Austria Country Championship;
° University Championship - award for the best students and employees of the high school system of Austria.
Start hours:
09:30 for Sprint distance, men, 1st wave
09:35 for Sprint distance, men, 2nd wave
09:40 for Sprint distance, ladies & teams
12:00 for half distance
12:45 for Olympic distance.
The bike route was 45 km long, up- und downhills, open traffic.
The TO motorcycles were split on 2 fix segments. On the downhill segments there are few things which a TO could see or do, actually you cannot do anything there.
For me and Peter meant a segment of about 15 or 20 km which we had to cover together with a second TO (from Luftenberg up to junction B3 to B125). We started from T1 and drove along the entire route, then about 5 km before the finish we returned about 15 km and then back and so on.
Every TO gets in the morning a complete excel list with the name of every other TO and their position in the race. This administrative aspect is prepared by the TO Chief.
In Penalty Box - here it was pretty strange located, inside the Transition Area, what myself I find improper - were a single TO, ideal is to be two of them and we had her phone number in case a competitor decide to leave the race on the bike course.
It was hot, very hot, my skin was burned out as I wasn't prepared with an adequate equipment and also no sun protection cream, so for me the hours spend on the route were a big challenge, but having fun and being interested in everything I saw and did I enjoyed the day a lot.
As always on the bike route the main issue is drafting. Long segments with strong wind attempt many competitors do stay in drafting, even if some of them do not quite realize that at the moment.
Drafting is when cyclists race in a pack and one cyclist can shelter behind the other to save energy. This is what you have seen in the Tour de France. Drafting is normally against the rules for all but the Elite Competitors. You must not take shelter cycling behind or cycle beside another competitor during the race. You can be disqualified from the race for drafting. The drafting area - and penalties times - is defined different, it depends from race and country (!) In the picture below there are 7 x 3 meters (UK), in Germany and Austria the area is about 10 or 12 x 1,5 or 3 meters. This is why the competitor have to carefully read and understand the regulations of every event where he/she starts.

As I already mentioned in previous articles:
As competitor without much or/and long experience I cannot appreciate the distance from the cyclist in front of me. A Technical Official can see and judge the exactly situation very fast. It is pretty difficult, if not impossible to draft by intention and to say "sorry, I did not realized!".
I told several cyclists in this situation: "Pay attention, you are drafting."
Most of them say "Thanks" or "OK". This is the right attitude. They will not be penalized. The role of the TO is to be sure everybody play fair, nobody is cheating, nobody is trying by clear intention to get advantages during the race, nobody disrespect the rules.
If a TO remains longer behind a group of cyclists this is because he counts. He observe the movements and he count. Me personally I count up to 20-35 seconds then I decide if it was drafting by intention or not and, as I said before, the judgement is pretty simple. If intention or bad willing, yellow card and no negotiation.
If the cyclist stay longer than half a minute close behind another cyclist this is clear drafting by intention, this is clear an advantage and this is not fair-play if the rule of the event does not allows drafting.
If you are overtaken you have to slow down for getting yourself out from the drafting area. If you do not slow down and stay in the drafting area longer than half a minute, you are subject to be penalized, yellow card.
If you get yellow card twice, the third will be a red one and you are DSQ.
If you argue with the TO you get red card.
So, after you leave the drafting area you can start your attempt to overtake the cyclist in front of you. Very few are successful about it. Of course, there are cyclists who slow down after they overtake another cyclist and this means lack of experience, not a very good judgement etc.
Imagine you are on the high way driving with 130 km/h and another car overtakes you, come in front of you and then slow down from 135 km/h to 130 or worse to 125 km/h. This seems a stupid thing to do and it is also not safe for anybody.
Another interesting issue is about blocking which is another non-fair-play stuff during a triathlon.

If you are a competitor and read this, do not forget a thing: the fact you do not know the rules does not matter when it comes to be penalized. When you start into a race your job is, along racing, to be sure about the rules. Reading and understanding.
Pay attention to some simple facts which allows you to avoid being penalized:
! be sure you have the plug bar ends on your bike.
When loading or/and unloading your bike into/from the car there is the risk the handle bar end get lost and you do not even notice. My advice: Replacement plug or wine cork have to be always in your pocket.
! The helmet must be closed and tight before you check-in. Between closure and chin strap it may be place for a finger, no more.
! No littering outside the littering areas allowed! In Austria you get red card without any further negotiation!!
! Avoid drafting, play fair. The time you have on your disposal to get out from the drafting area depends from race to race, profile, distance, country (15 seconds, 25 or 30 seconds). The exceptions are also depending of conditions and there are always or fast always segments on the bike route when drafting can be allowed, see uphill, downhill, narrow curves.
! Do not attempt, do not even think drafting behind a car. Drafting area in this case is 35 x 3 m!

Happy and safe race to everybody :-)

P.S.
I gifted 2 penalties for drafting this time, this meant the cyclist had to go himself to the PB after the cycling route and stay there waiting the penalty time run out.