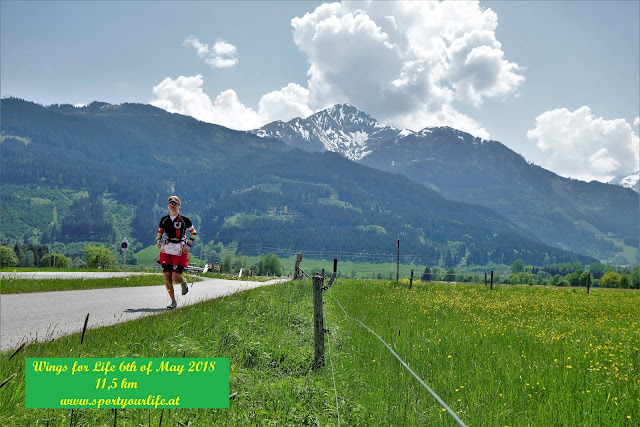 It was a wonderful weather in Zell am See. A little bit too much sun for a long run, but it was OK.
Just a few people coming to run at Areitbahn Parking Place in Schüttdorf. Good organisation, I had no idea it will be organized or so. No new contacts, the Austrians like to keep distance. They watch and observe, but stay away.
So .... I did "my" run between the first group which took advance immediatly after the start at 1 p.m. and the second group which I left behind me very soon after the start. I just didn't feel OK to stay behind. I can't speak while running, so what's the point?! 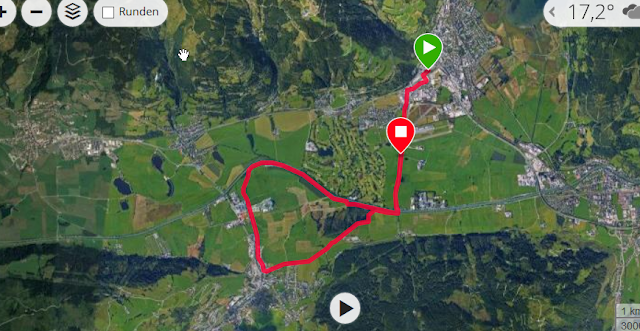 On the other hand, my goal was to run for about 7 km and after the car would have catch me I intended to finish, go change, call Martin - a guy I met last week-end for the first time -  and go with him to Saalfelden for a hike on the fantastic range of mountains called "Das Steinernes Meer" ("Rocky Sea") which I first saw in August last year. I could say that the image of this Rocky Sea brought me here from Low Austria as I couldn't left the area anymore and I decided to take all possible risks to move out here. And I did it .... I spent all I still had to move out here 3,5 months later from the first "meeting" with Rocky Sea. I had no idea that day being so close - only 12 km - from Zell am See-Kaprun! Life .....!!
These both pictures I took mid of December after I moved out here to Zell am See. Everytime when I watch them it took my breath away and butterflies move in my stomach ..... 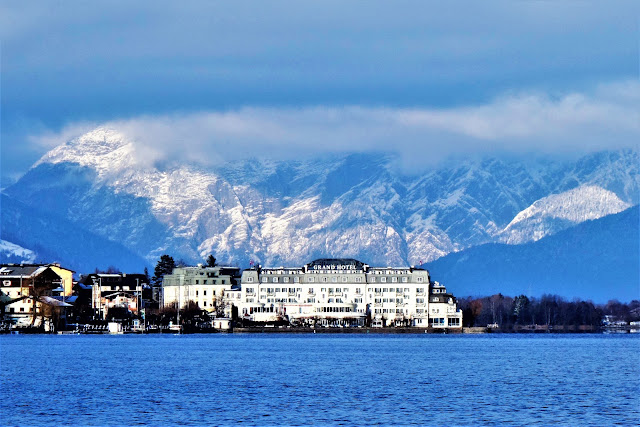 So, the concept of Wings for Life is relatively simple: people on the entire planet Earth start to run or walk in the same moment. 1 p.m. in Austria. You pay on-line (20 Euros as resident in Austria), get the electronic confirmation and the number, you print your number and wear it during the run.
The event is actually not a competition in the standard use of the term. Globally there is a winner who this year get some holiday time in Austria (just by chance it happens to be Austria, so far I have read). So, if the winner run in India or China or where ever he was running and whatever nationality he is, he win the holiday in Austria. You can run by yourself using an App and being monitorised, which is a great idea. You can run in a team or go to a local event as I did.
You have to manage all the fluids and energy intake by yourself, there are no lab stations or so on the trail.
30 minutes after the start an official car will start too and will drive 15 km per hour. At the time the car catch you, your time is off, you are out of the "competition". So I thought, in the 30 minutes I can run 5 km and then I could run 2 km longer. The app started correctly at 1 p.m. and after each km I got the verbal message about the distance I had run. 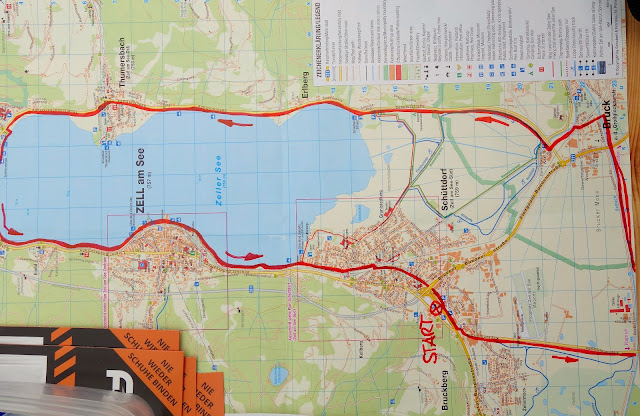 After about ten km I decided to leave the official trail, as the entire route was actually for at least 20 km and I didn't want to run so long. I have run only the distance to Kaprun and back, than the trail went on to Bruck am Grossglockner, Thumersback and around the lack back to Areitbahn - I would say a total of 22-23 km? I know the route by segments very well already.
No car catched me and I waited, I slowed down, I walked ..... I even took pictures!!!! no car ..... I stopped my own watch going back home and then I heared in the headphone: "The car is catching you now!" Wow!
"Wow" because I was pretty sure that after I leave the official trail I will be lost or kicked out from the official time, but it seems I was wrong. I would probably run longer instead of walking and taking pictures if I would have known I am still monitorised :-) Anyway, now I understand the concept better and I know you can run 15-20 km until the car catch you.
What it is interesting to remark:
So few people taking part in a humanitarian event where they get anything along the parcours, but the cost is much lower and so many people taking part to every races (where the costs are 2 or 3 or 4 times higher!!!) where the organiser is doing everything for you and you get fueling along the parcours and a participation kit with what ever stuff in it.
I called Martin to pick me up in an hour, I got home to change and then we drove the Maria Alm.
What a marvelous area!! 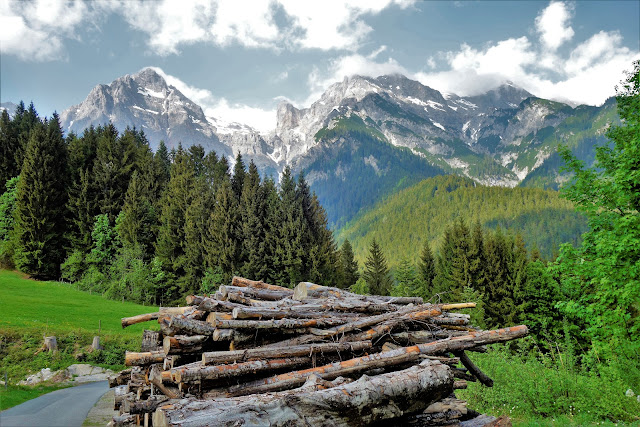 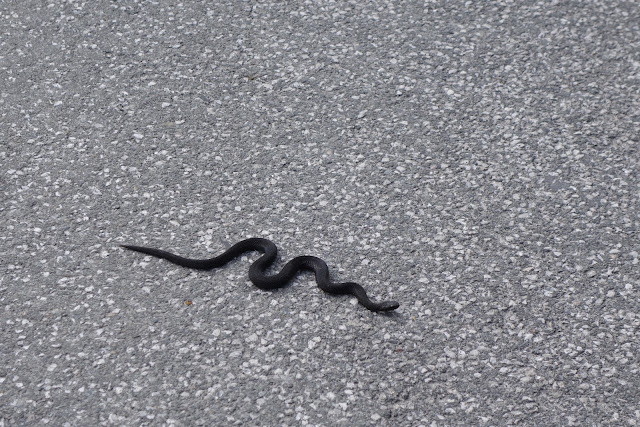 The snake suddenly appeared after I took my feet from the spot, Martin was behind me and called me to see it .... in a very hurry-hurry elegant move the snacke crossed the road under our eyes, keeping the head arose.
I remembered being here by bike in winter, mid of January and having a long-long conversation with a dear cat :-) who didn't want to let me go away again. 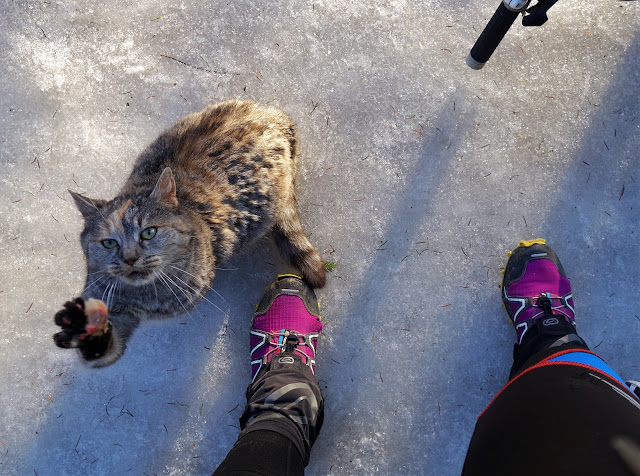 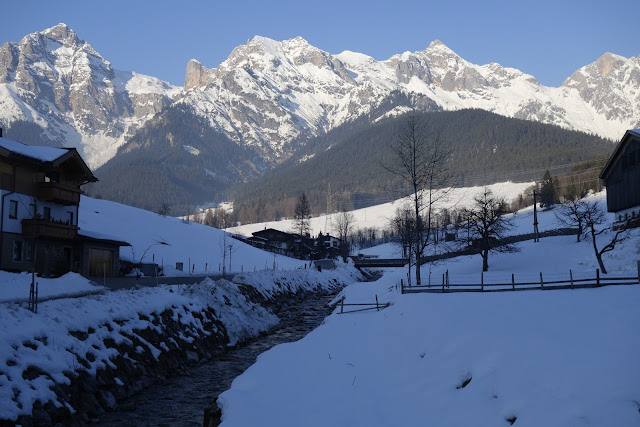 I returned via Maishofen that time. 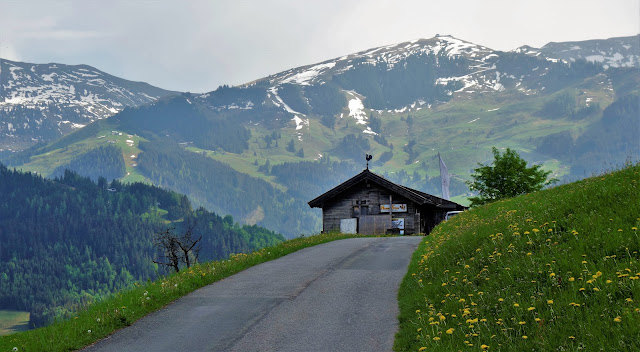 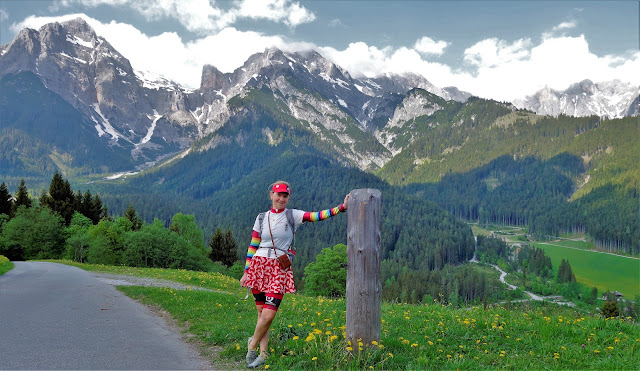 To the northwest the Steinernes Meer borders on the Hochkalter stock and the Watzmann, to the northeast lie the Hagen Mountains and to the southeast the Hochkönig. It has an area of around 160 km², making it the largest massif in the Berchtesgaden Alps. Of that, 55 square kilometres lies above 2,000 metres. To the south the mountains drop steeply into the Saalfelden Basin. Immediately at the foot of its northern slopes is the lake of Königssee. 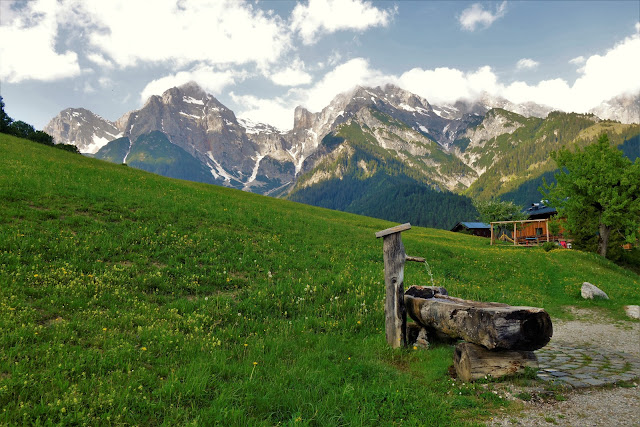 Dachstein limestone and karst features characterise the scenery. Some 800 karst caves have been identified in the Steinernes Meer to date. Also typical is the distinctive plateau character of the Steinernes Meer above a height of 2,000 metres, which is well illustrated by two statistics. First, fifty - i.e. almost all - summits have a height of 2,000 to 2,600 m; only about ten are lower. Second, the average prominence and isolation of the summits is low; only a few mountains rise significantly over the plateau.
The name of the range means "rocky sea" and derives from the rocky and bare character of the plateau, its grey expanse recalling a fossilised sea. The Bavarian half of the Steinernes Meer belongs to the Berchtesgaden National Park; the Austrian side to the Limestone Alps Nature Reserve (Naturschutzgebiet Kalkhochalpen). 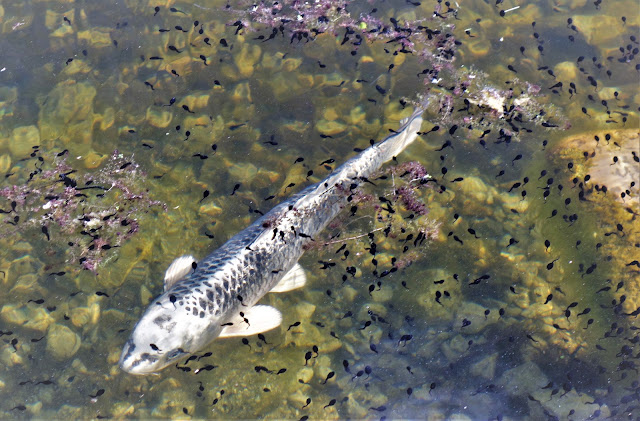 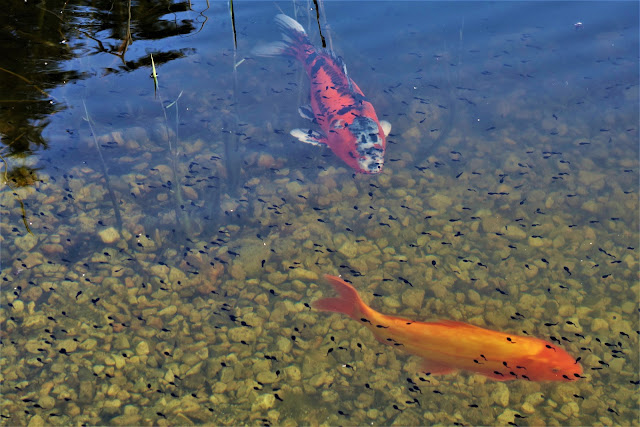 The most distinctive and best-known peak in the Steinernes Meer is the Schönfeldspitze (2,653 m) on the southern edge on the Pinzgau side, whose summit pyramid is also visible from Berchtesgaden and which is the emblem of the Berchtesgadener Land.
The far less well known Selbhorn (2,655 m) is slightly higher than the Schönfeldspitze and is the highest peak in the range. 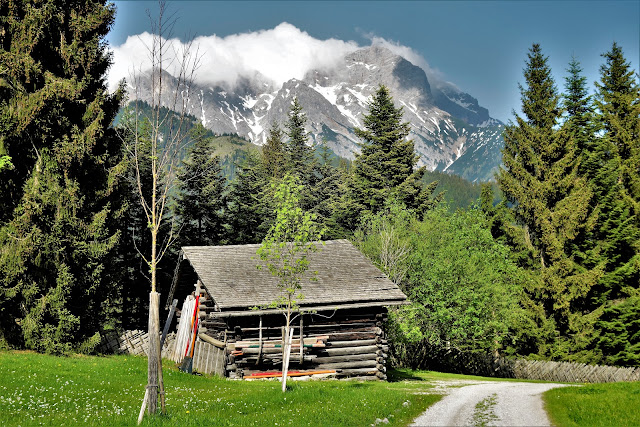 Other high and well-known summits include the Brandhorn (2,610 m), which forms the tripoint of the Berchtesgadener Land with the Pinzgau and Pongau regions; the Großer Hundstod (2,593 m), the Funtenseetauern (2,578 m) and the Breithorn (2,504 m). 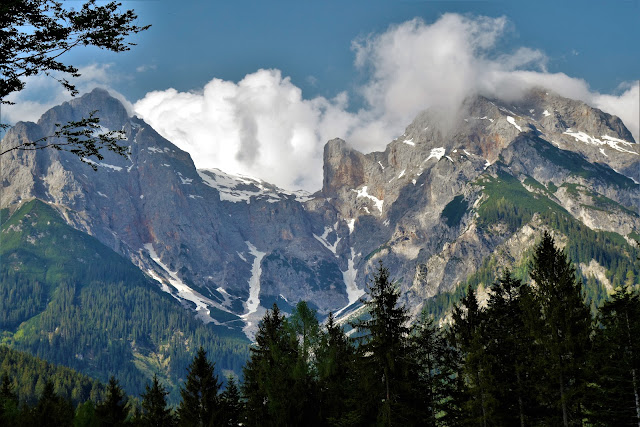 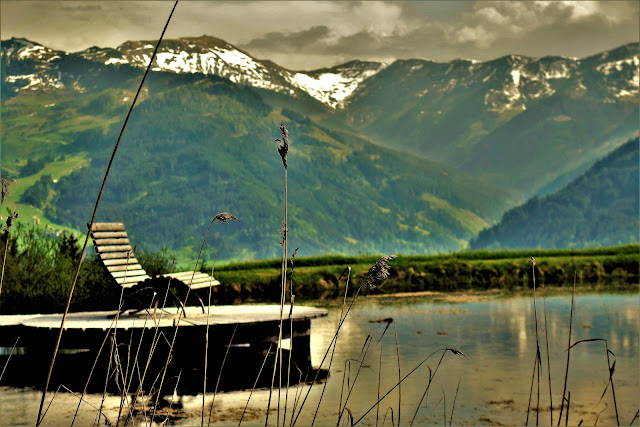 Only about 20 peaks are accessible over a marked hiking path or climb. This indicates that tourists concentrate largely on a few destinations. Large parts of the plateau are places of absolute solitude; many peaks are only rarely if ever climbed. 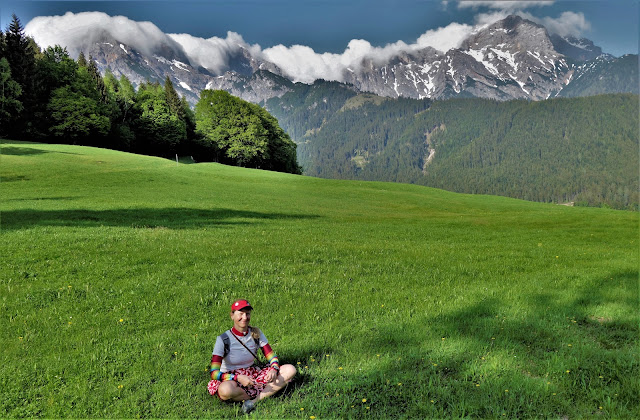 The most important elevations in the Steinernes Meer, in order of height (incomplete list):

On the to do list:
To overcross the Rocky Sea from Austria to Germany! 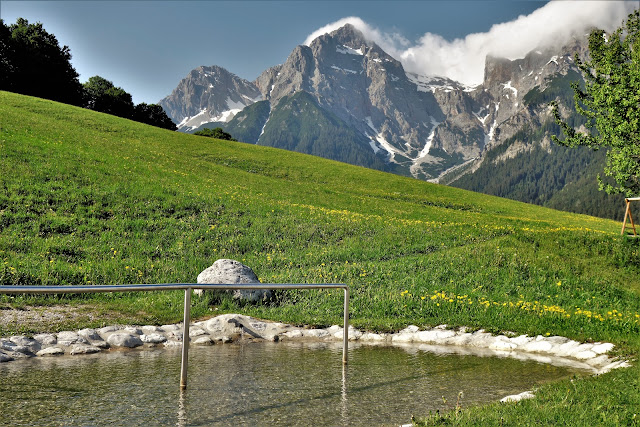 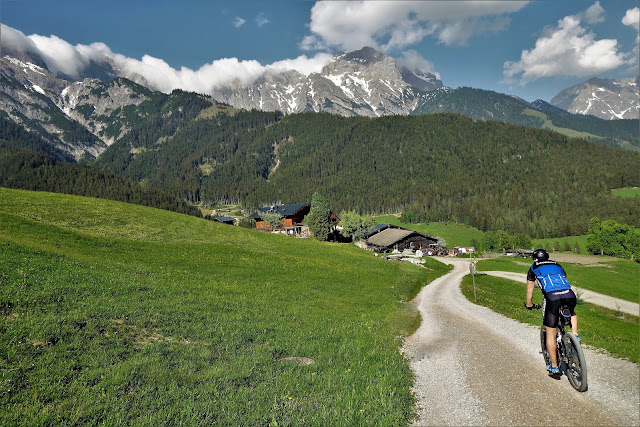 The pictures from today are hier
By the way, the winners from yesterday: 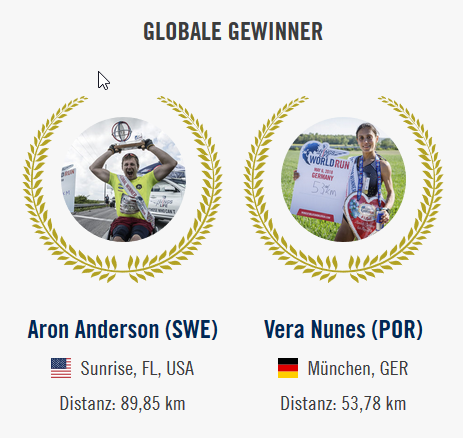 Note: Aron Anderson was "running" in his wheel chair and Vera Nunes on her own feet. Astonishing performance!