My own Duathlon on lava dessert of Lanzarote with a road bike_Ep. 2_Timanfaya

As I started to tell the story here I will continue now up to the end with several pictures. Here something more details about National Park Timanfaya.
I left Tinajo by bike to Mancha Blanca. 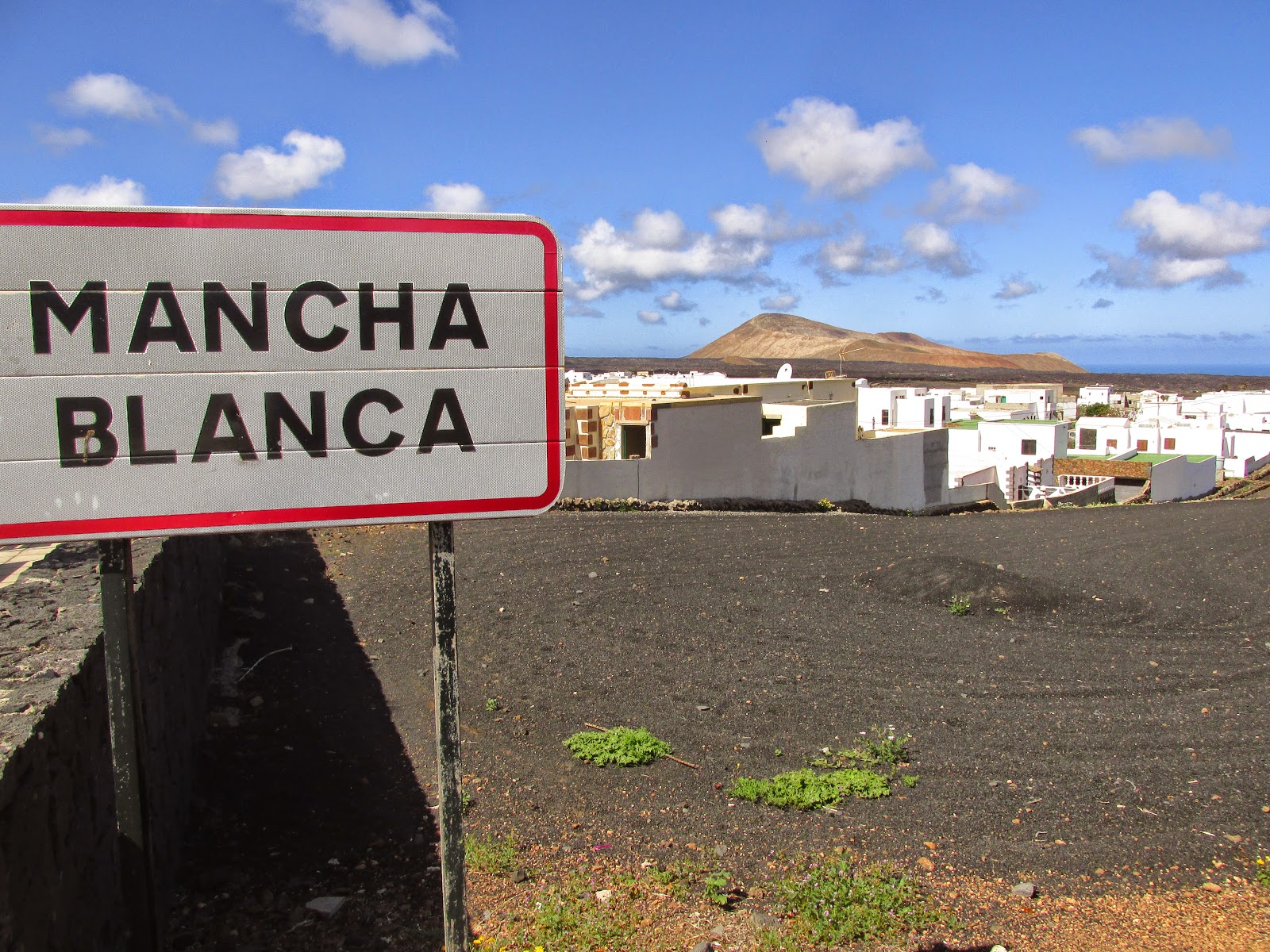 Exceptional weather. The plan was set, today I wanted to go to Timanfaya National Park of Lanzarote. It was one of the main reasons I choose Tinajo for accommodation between calderas and lava hills and mountains. 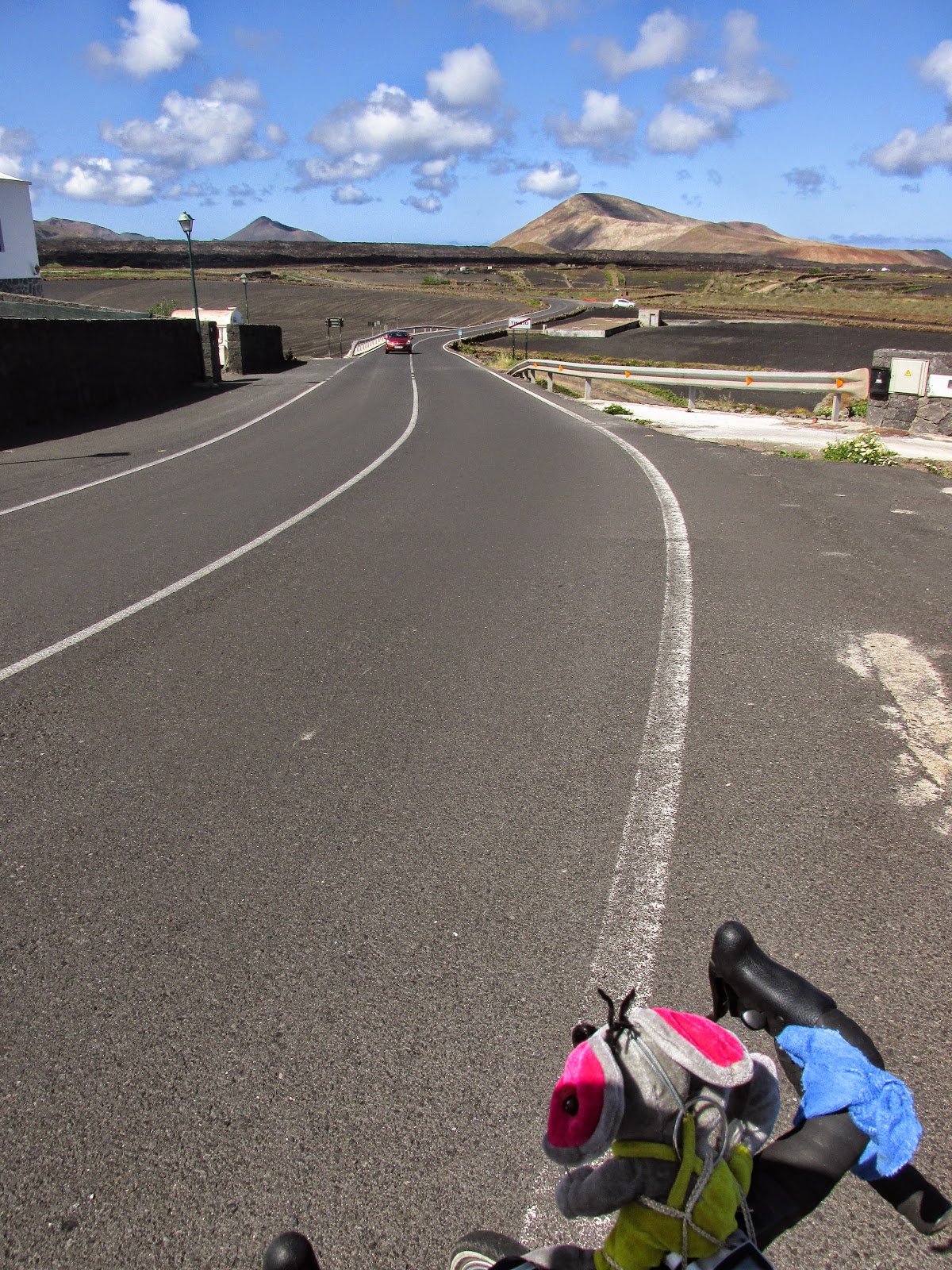 The road conditions on the island are almost perfect, you cannot dream about something more.
After about 2 or 3 km on the right side of the asphalt road I saw a long road leading to a mountain. Two cyclists on mountain bikes were coming from there and I could read a sort of disappointed faces. Hours later I also understood the reason :-), but myself I did not let me disappointed, you will see!! 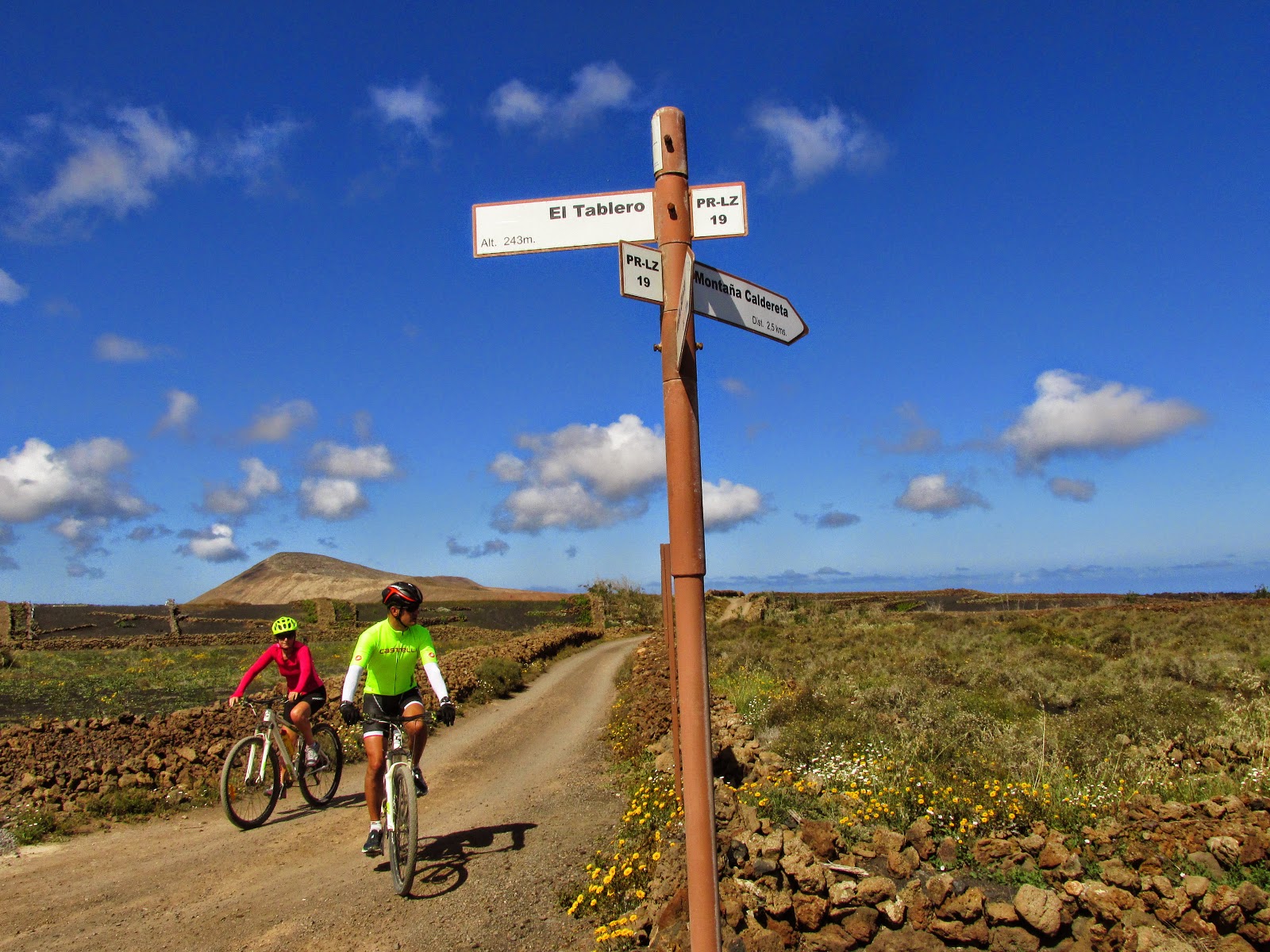 I left the road on my ride planing to go on it when returning later back home.
My destination was now a different one about 10 km away, so I continued to cycle on my direction. 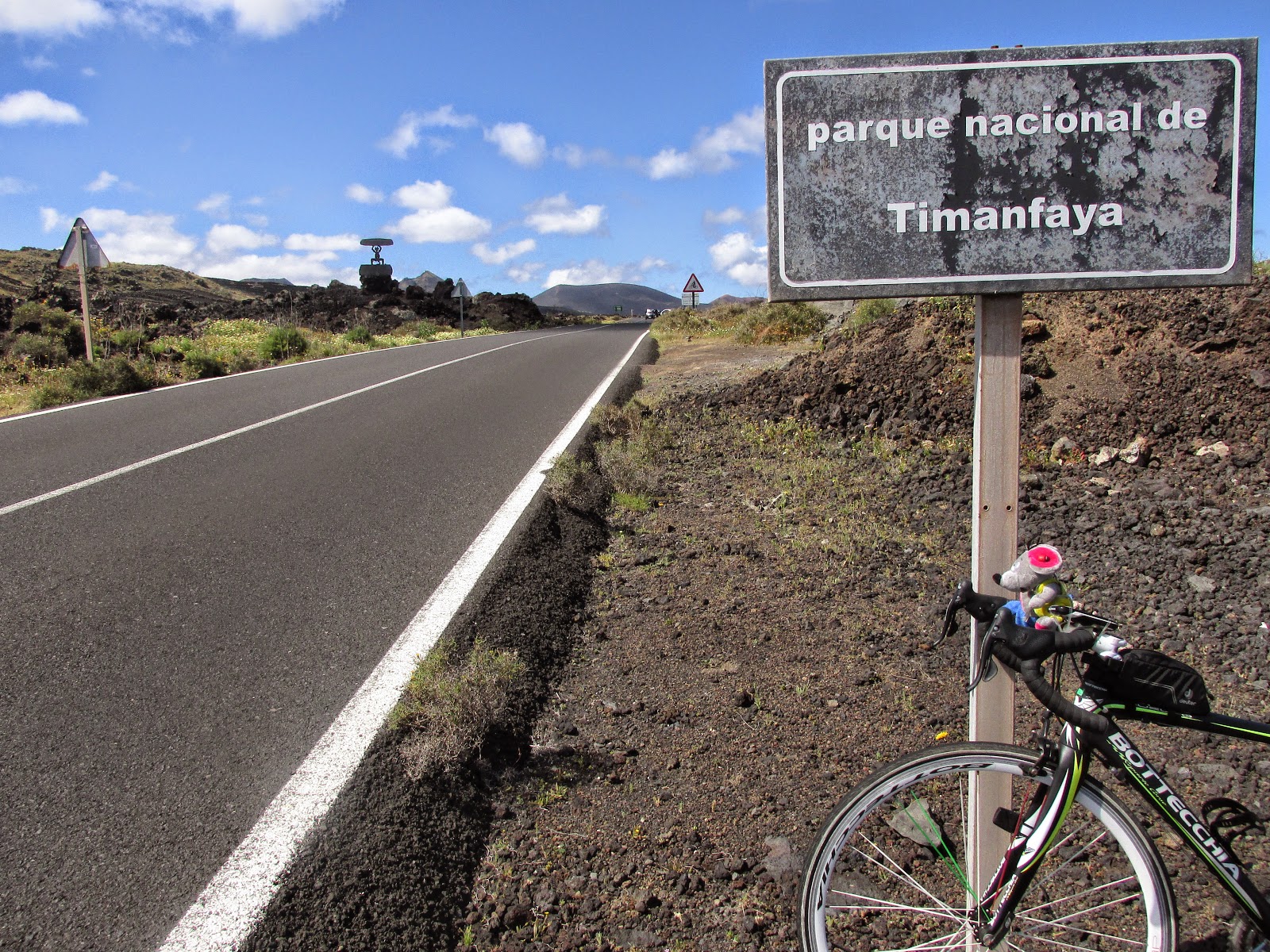 The Timanfaya National Park was established and declared as such in 1974. It is located in the south of Lanzarote and has an area of 551 square kilometers. It is the second most visited National Park of Spain. It can be reached on a very good asphalt road which was built in 1950 due to the visit of General Franco. 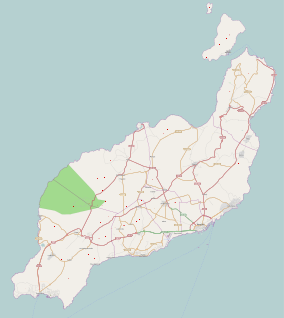 "El Diablo" is the symbol of the Park and the statue was created by Manrique Cesar. 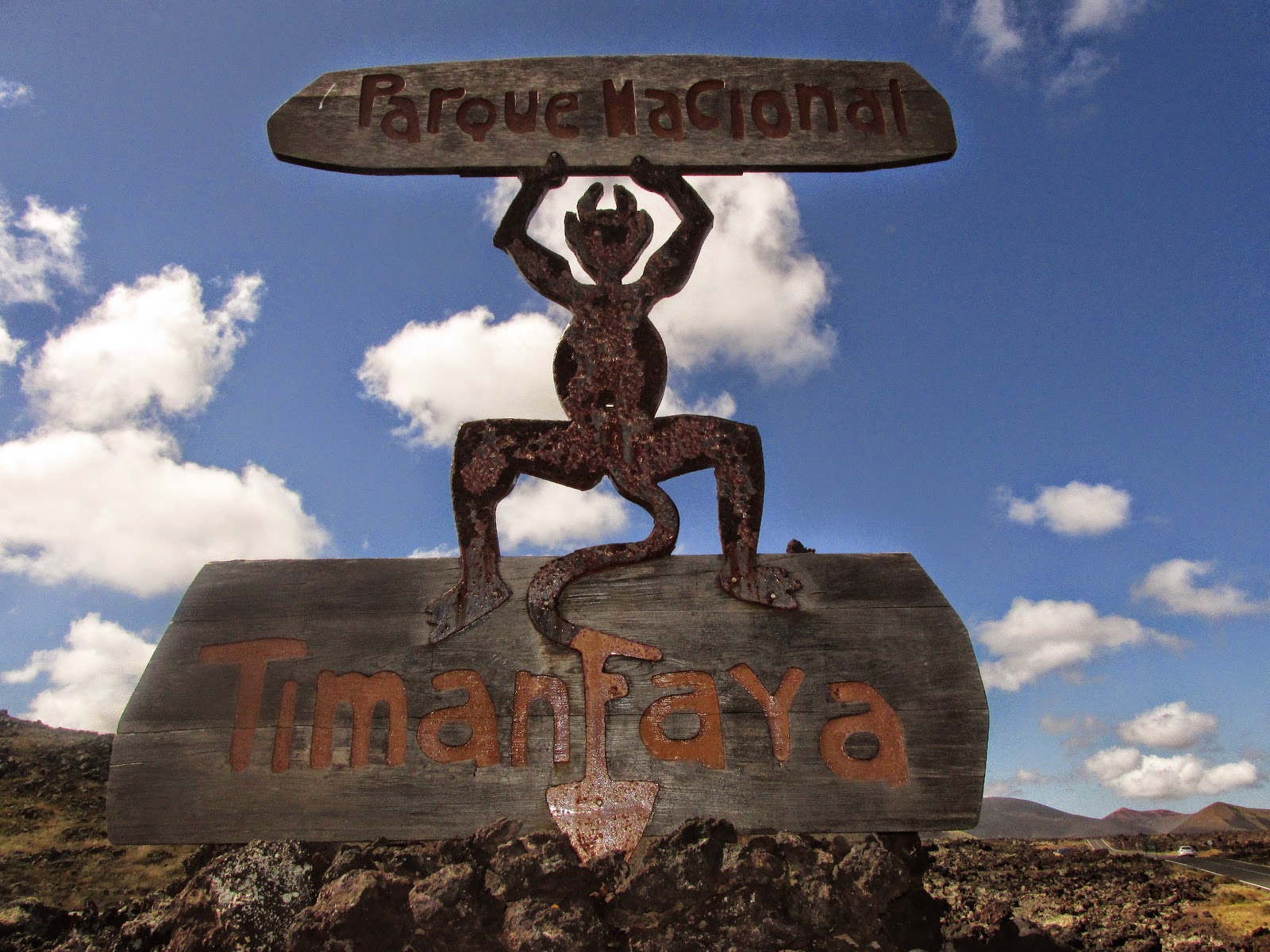 The volcanic landscape of the Timanfaya arose between 1730 and 1736. During this period were formed numerous volcanic cones (the Fire Mountains, Montañas de Fuego) and its magma covered a quarter of the island of Lanzarote. The once fertile land where a lot of agriculture was operating, is today covered by the solidified lava. 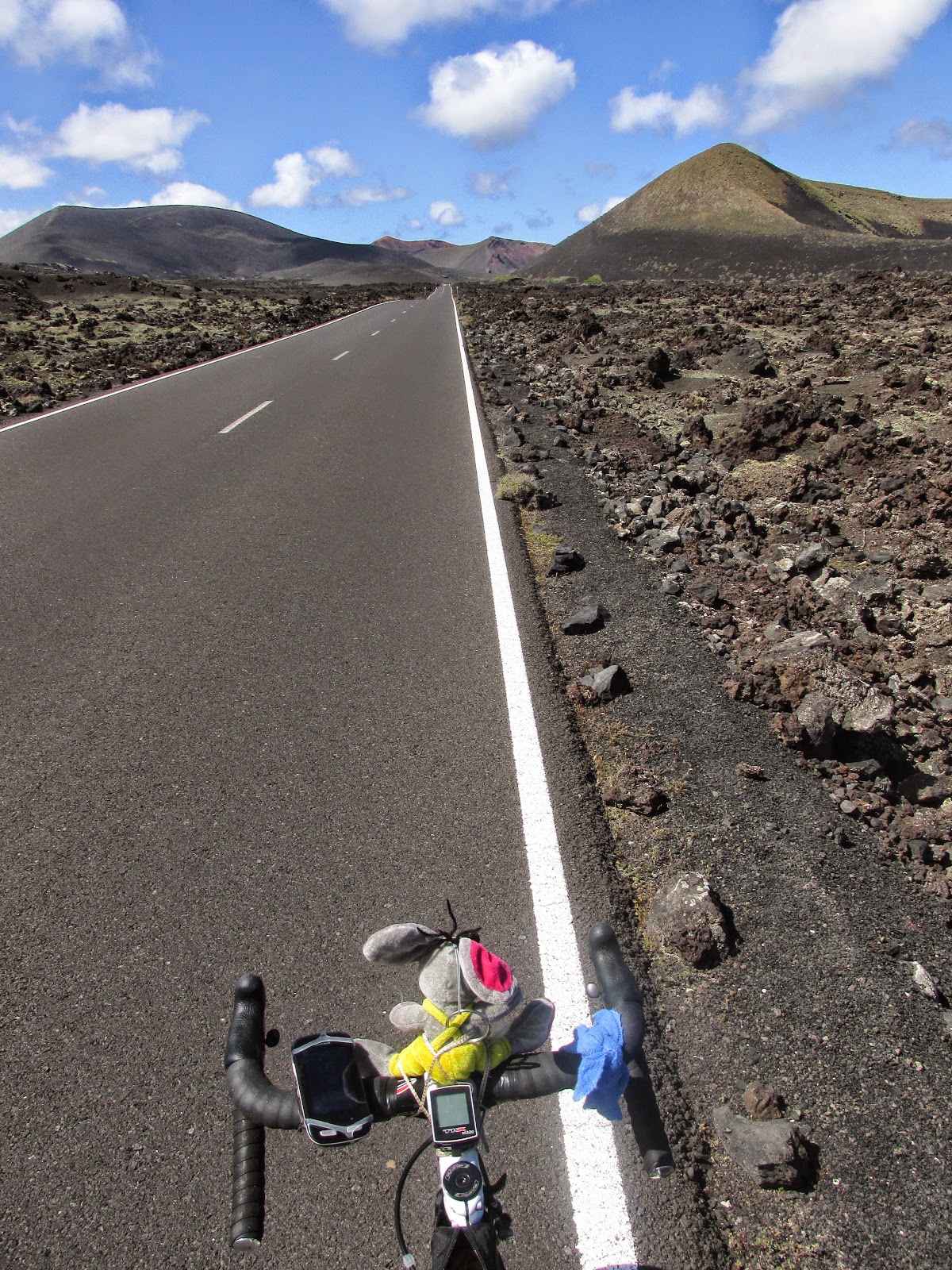 In the 19th century there were new outbreaks. In 1824 arose other volcanoes such as the volcano Nuevo del Fuego (named Chinero), the only one which is located on the present territory of the National Park. The volcanic activity now rests since the 25th Oktober 1824. 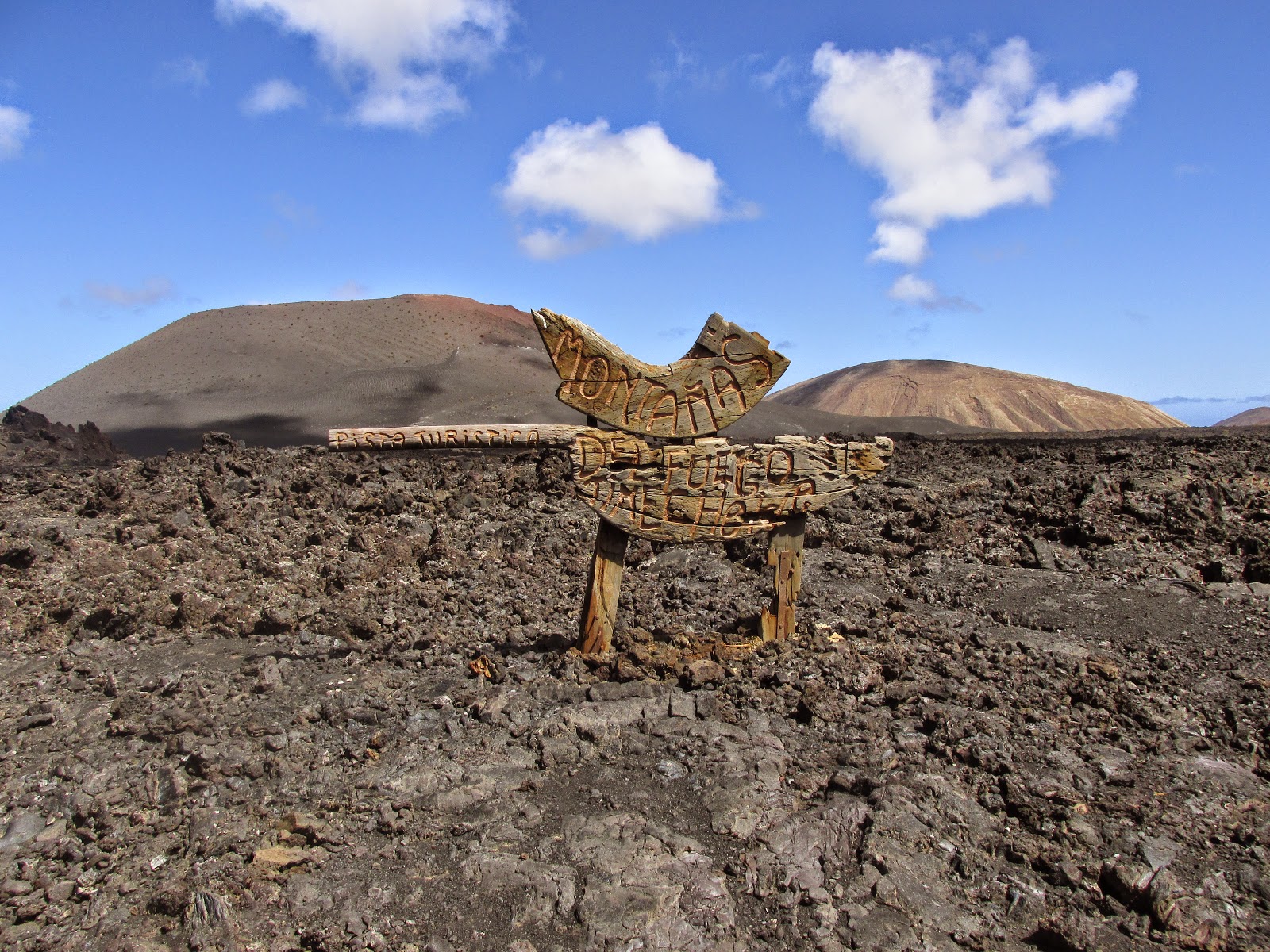 I was the only one by bike on the road, I paid 9 euros and I was free to enter and ride for the next 2 km only. Then I had to park my bike, as cycling is not allowed. Why? I had to see later on myself. 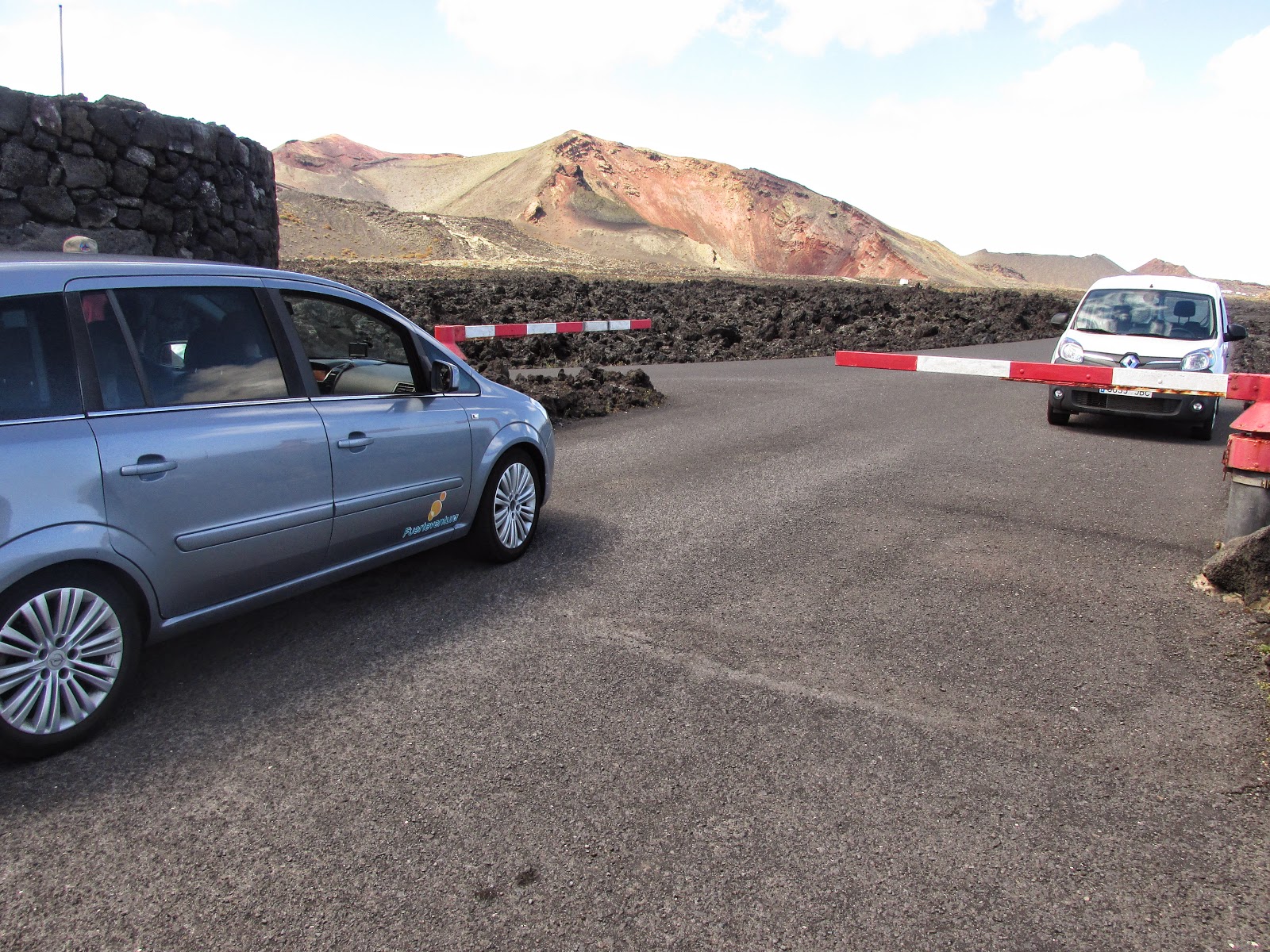 I left the many cars behind me enjoying the adventure .... which it was after all not an adventure, because you are not free to go on yourself anywhere inside the area, as I dared to hope on my mind. After about 1,5 km I stopped behind the last car which was waiting on the long row of cars. This was a stupid thing to do, but I thought it would be fair and respectful for the drivers. Stupid me! Bad education! 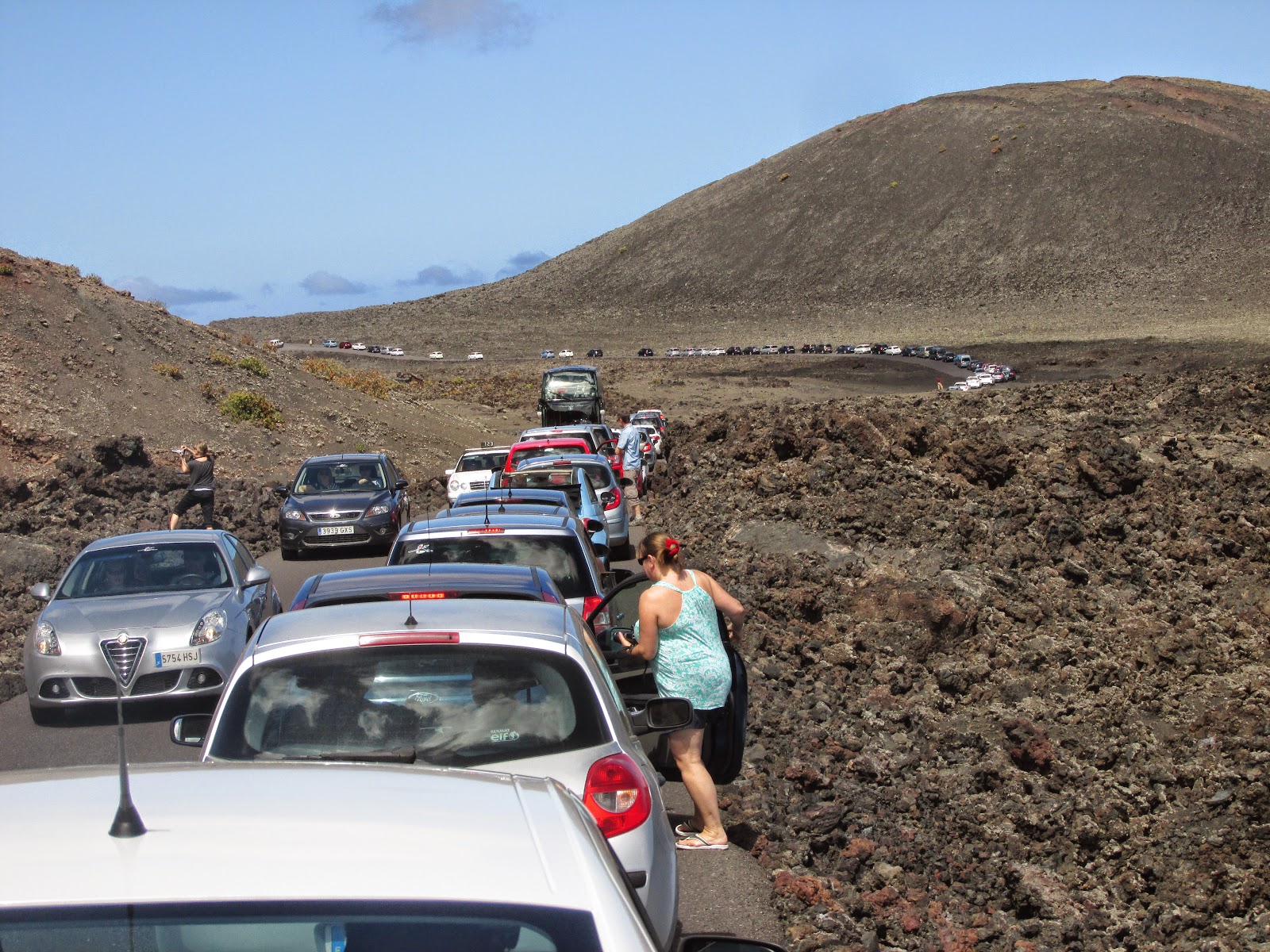 I lost about 40 minutes because of being bad educated .... We advanced very slowly until a common point of the very narrow road where there were two guardians. One of them signed me to go further, not to wait after the cars in front of me and at that moment I realized I could have done this 40 minutes before! 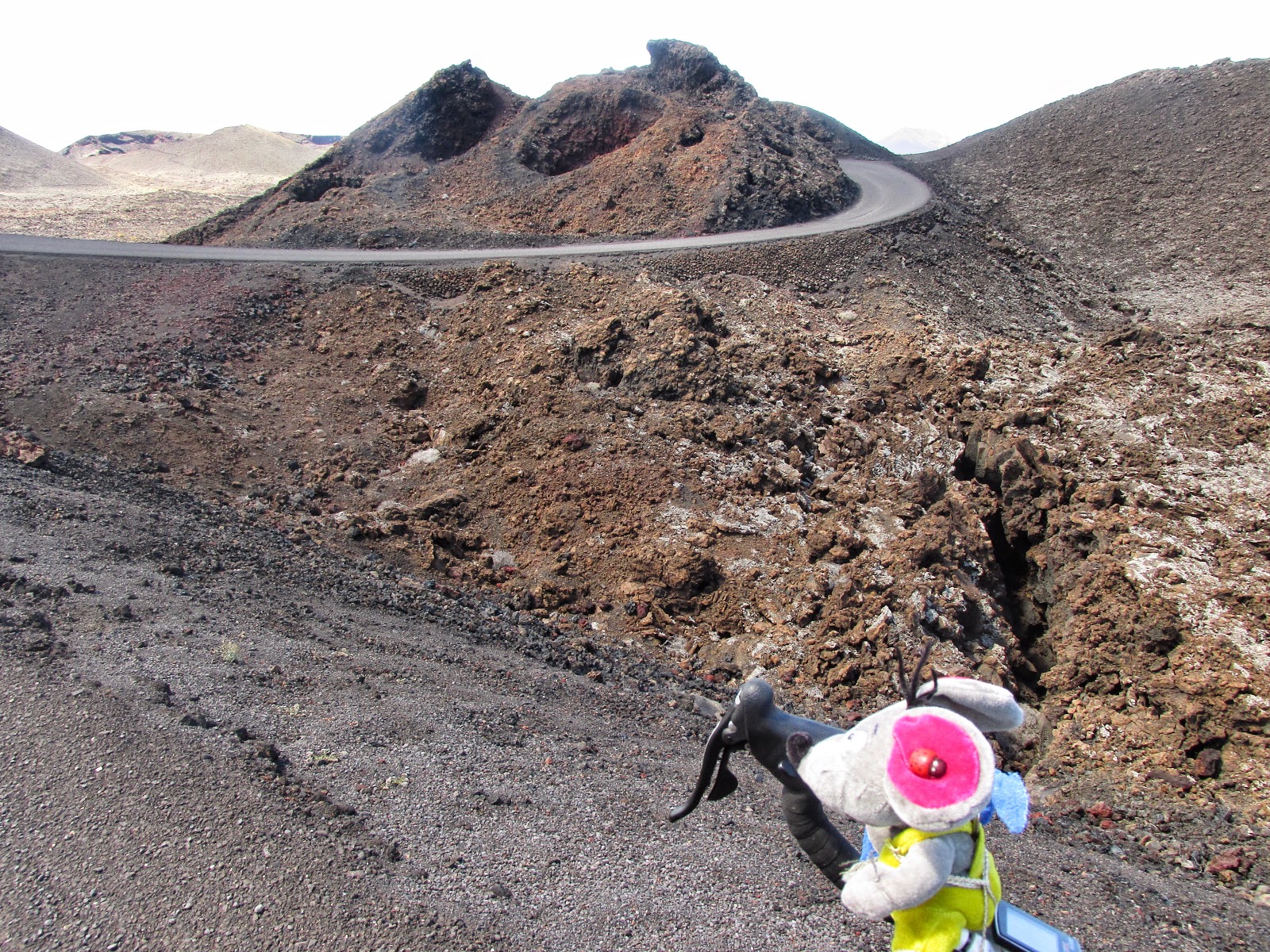 Because there is a big parking place where you have to let your car. From that moment you are by foot and can go to the restaurant, to the toilet, to the souvenirs shop or just looking around. Or you can go and wait to go on board of one of the National Park Coaches. 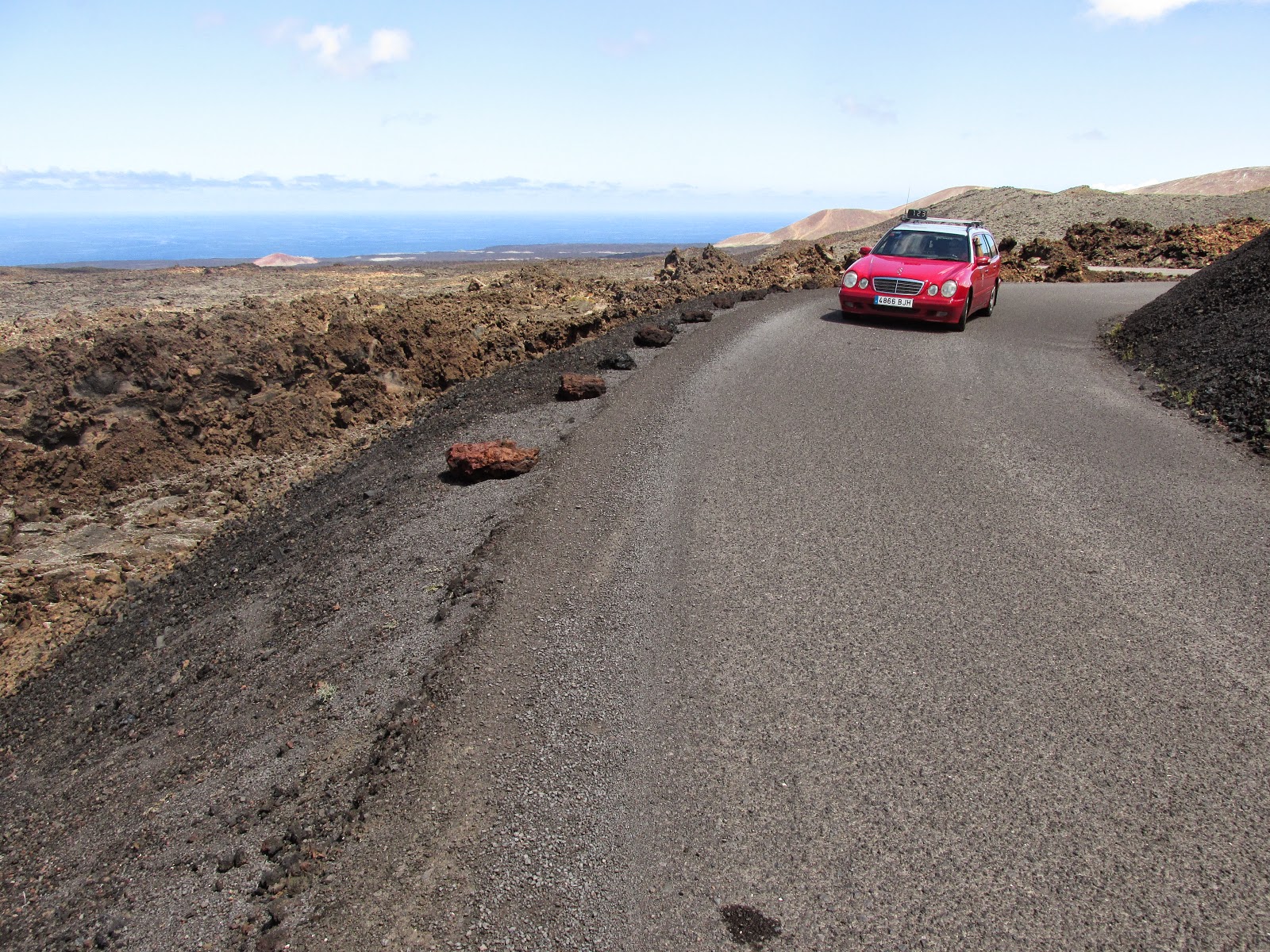 Unfortunately there is no special place where you can let the bike in secure conditions. I was worried. No fence, no nothing. I had to let it somewhere outside against a wall. What could I do?!
I took the first available bus. The conditions are not ideal, to be very honest. If you cannot sit on the first row, you see almost anything. The bus windows are not clear, the pictures you can shoot are such a bad quality that you cannot use them for anything! From this point of view it was a big disillusion for me. 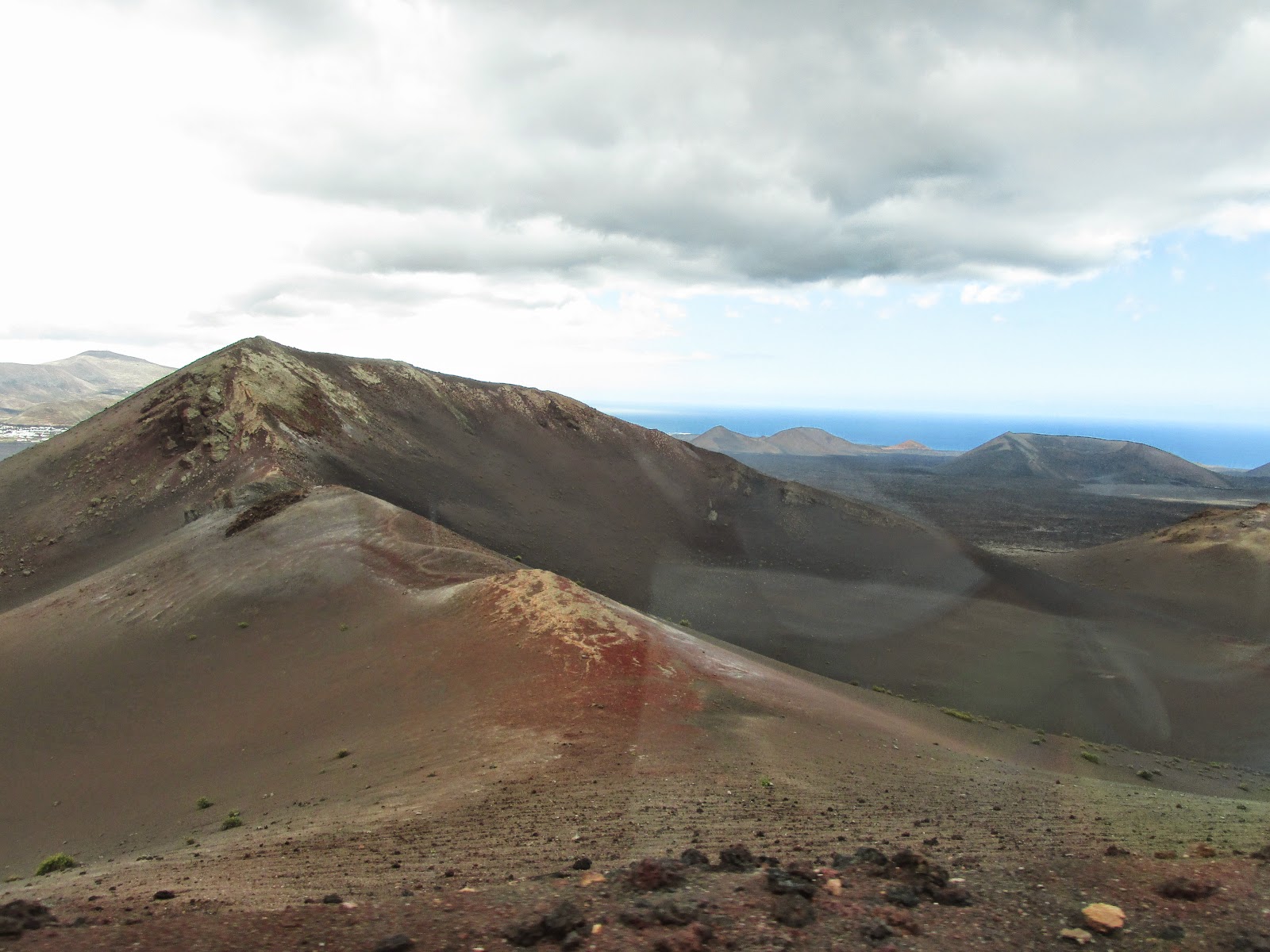 The heat of the earth still lies in the ground and in some places at one meter depth there are temperatures of 100°C or up to 13 meters depth the temperatures arise from 400 to 600°C.
As you can see here, to demonstrate this the man let some water inside these holes - inside there is mounted a pipe, of course - and the Earth power throw back the boiled water with a huge pressure. 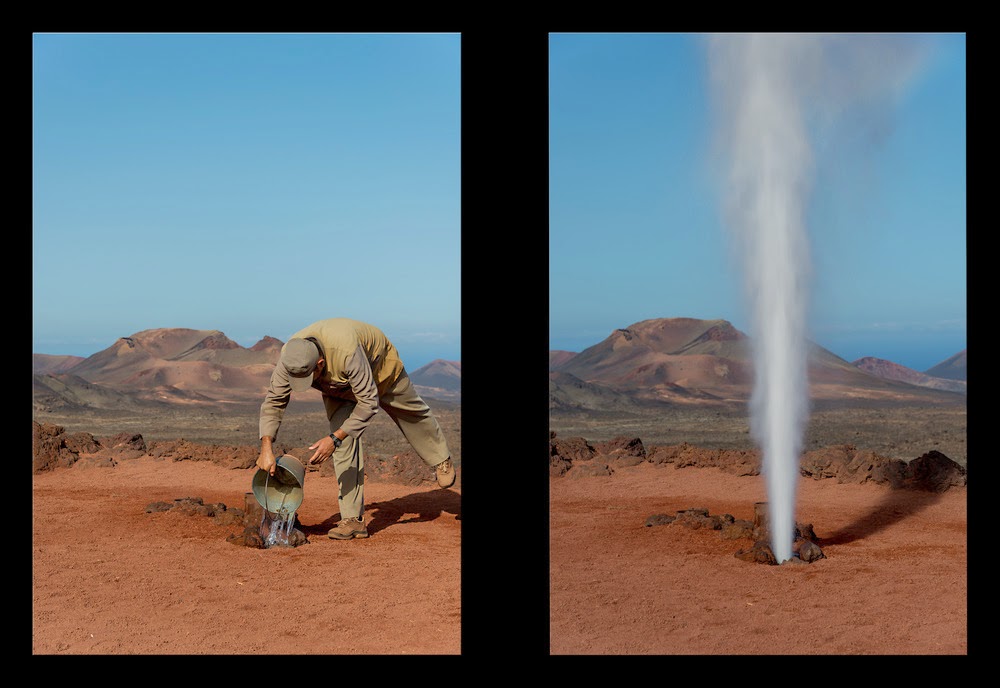 Several roads run through the volcanic landscape and is believed to be transported to another world. The dark lava and volcanic cones provide a wonderful contrast to the blue sky.

The picture above does not belong to me, of course, it is impossible to shoot such a clear picture through those bus windows, unfortunately. And on the route I did not get such a magnificent perspective on a crater .... so, what can I say different than I was disappointed about the 40 minutes slowly tour, but I do not regret doing it. Fortunately the 9 euros entry fee is a decent amount. 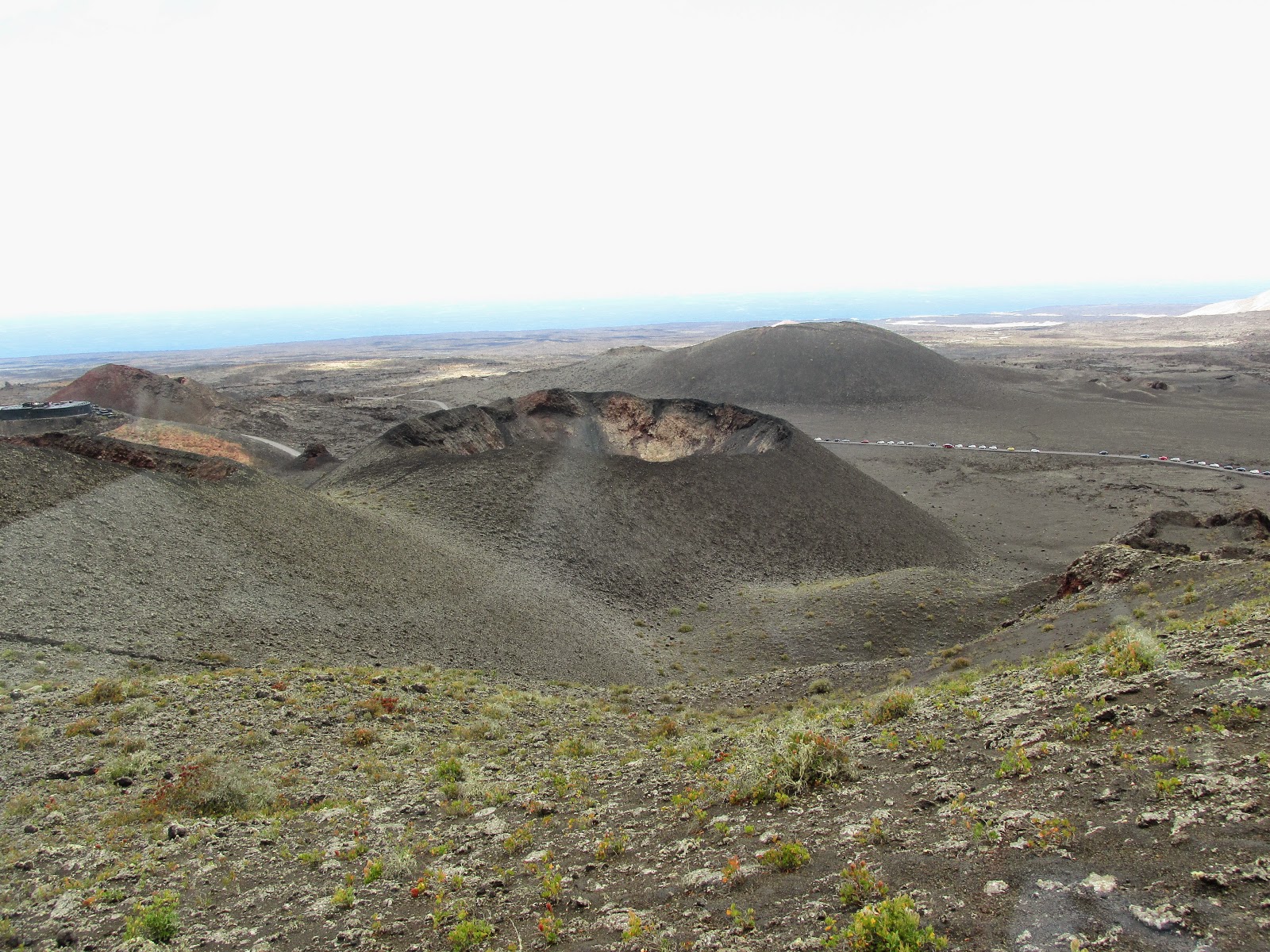 The 14-kilometer round trip can be done only by bus. The road built through the lava is pretty spectacular and very narrow. From the 350-meter high Montaña Rajada you can get an overview of most of the Timanfaya National Park. The large complex, which occupies the sea of lava now, belonged before the eruptions to most fertile part of Lanzarote. After the disaster that was incredible amount of eight million cubic meters of lava where previously small villages and individual farms had existed; a total of about 420 houses were destroyed. The destroyed villages were Timanfaya, Los Rodeos, Mancha Blanca, Santa Catalina, Mazo, Jarretas, Tingafa, Peña Palomas, Testeina, La Geria, Macintafe, Mozaga, Guagaro, Masdache and Iguadén, also the estates of Maretas and Chupaderos. 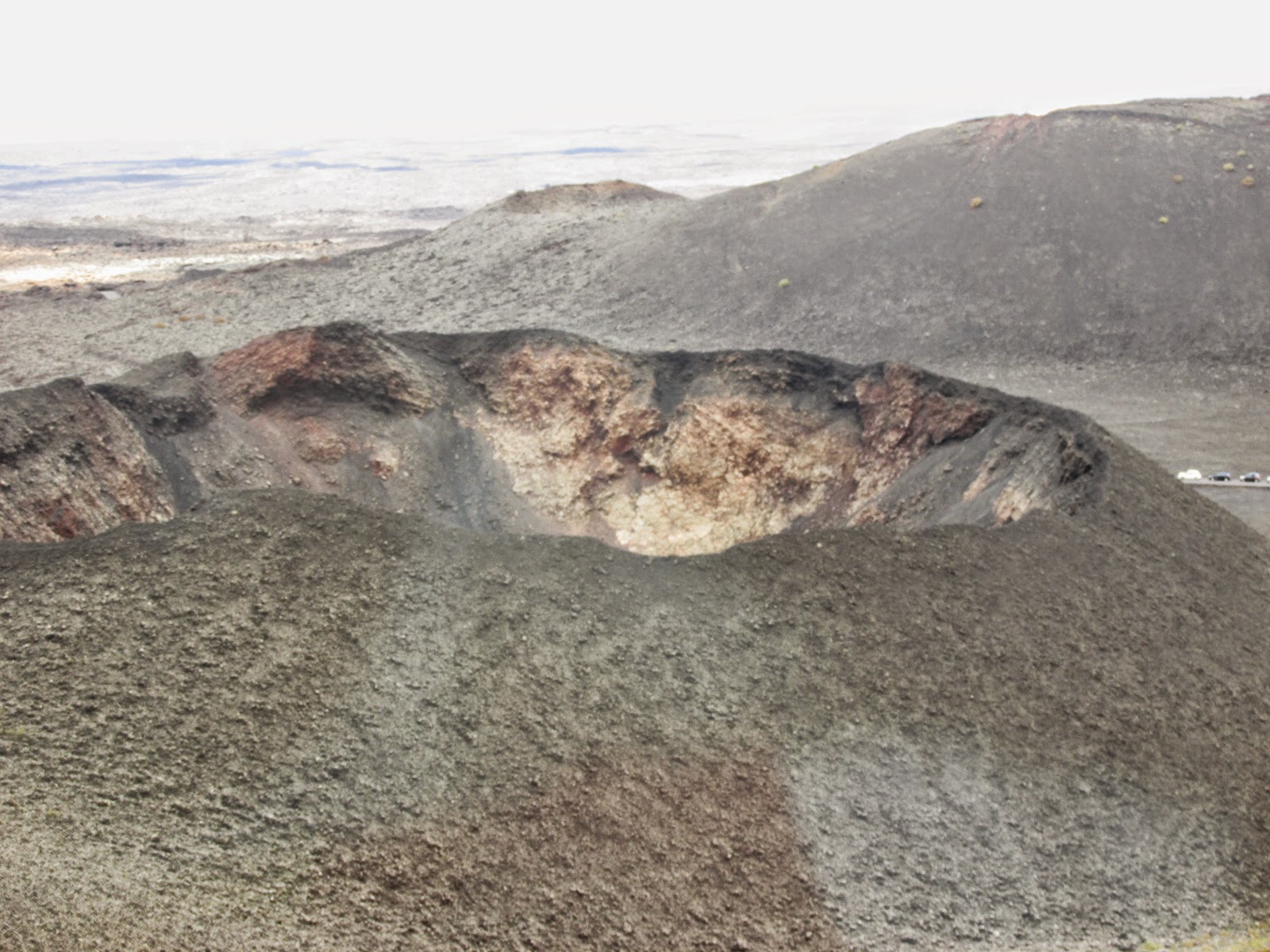 The volcanoes that form the Timanfaya National Park belong to the so-called Hawaiian group. They accumulated into huge ash columns, lapilli*, which being transported by the wind cover wide areas and slopes of old crater at high altitudes. These areas formed by the ash fall are called Valle de la Tranquilidad (valley of peace). The center of the outbreak was the Maciso del Fuego (Fire Massif), which rises 525 meters high. This volcano is covered with slag and ash originating from the eruptions of the 18th century. 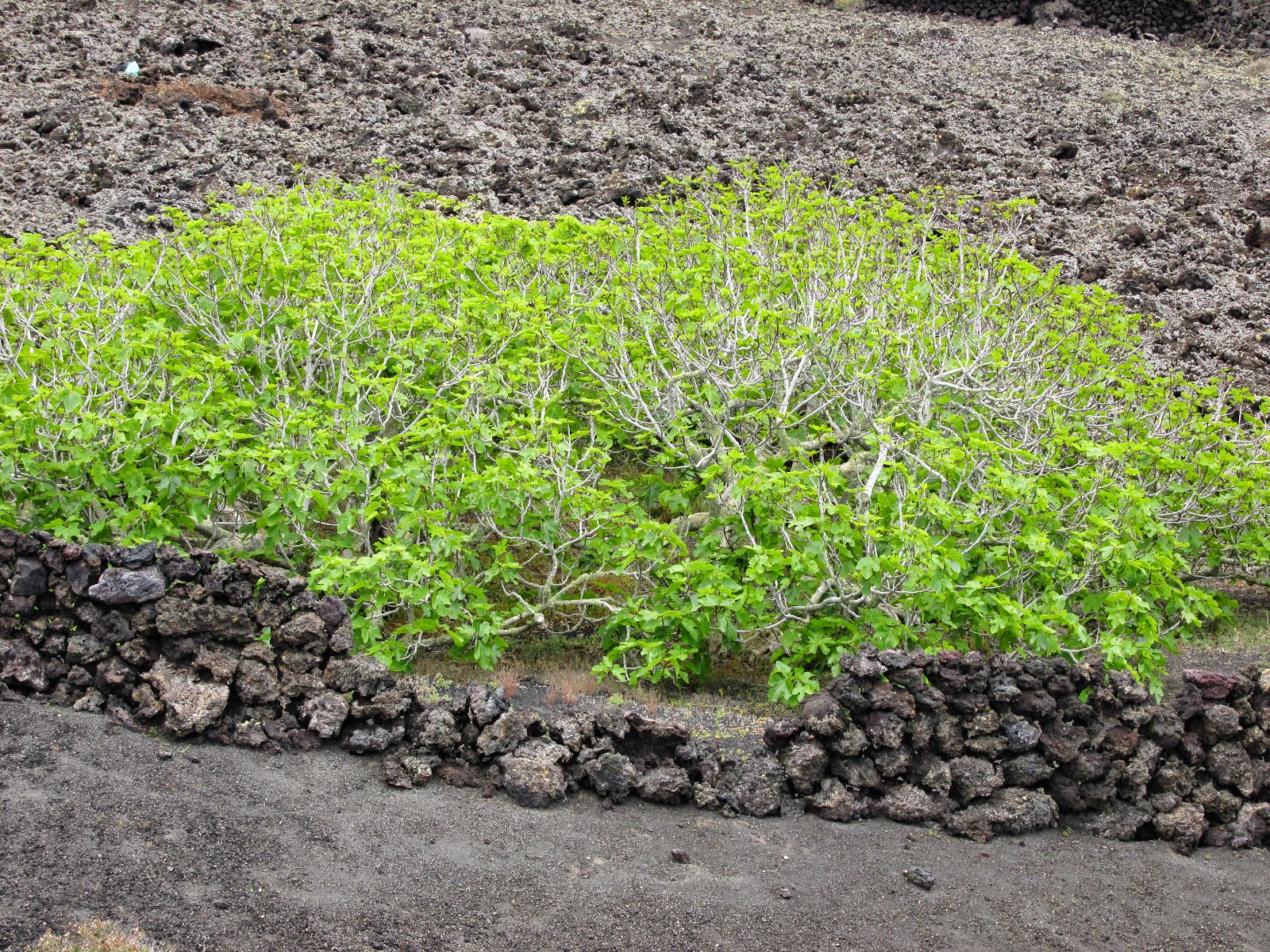 However, it was found that the ridge that still emits intense heat radiation consists of very old lava belonging to the ancient mountain Timanfaya. Interesting are the frequent rows of small stoves (Hornitos) and parasite volcanoes, named such as because they have been formed at the foot of a central colossus. The impressive cinder cone Caldera del Corazoncillo has a crater of about 100 meters below the ground surface. The Lava of this volcano buried in 1730 the village of Timanfaya.
*Lapilli is a size classification term for tephra, which is material that falls out of the air during a volcanic eruption or during some meteorite impacts.
Lapilli (singular: lapillus) means "little stones" in Latin.
By definition lapilli range from 2 to 64 mm (0.08 to 2.52 in) in diameter. A pyroclastic particle greater than 64 mm in diameter is known as a volcanic bomb when molten, or a volcanic block when solid. Pyroclastic material with particles less than 2 mm in diameter is referred to as volcanic ash.